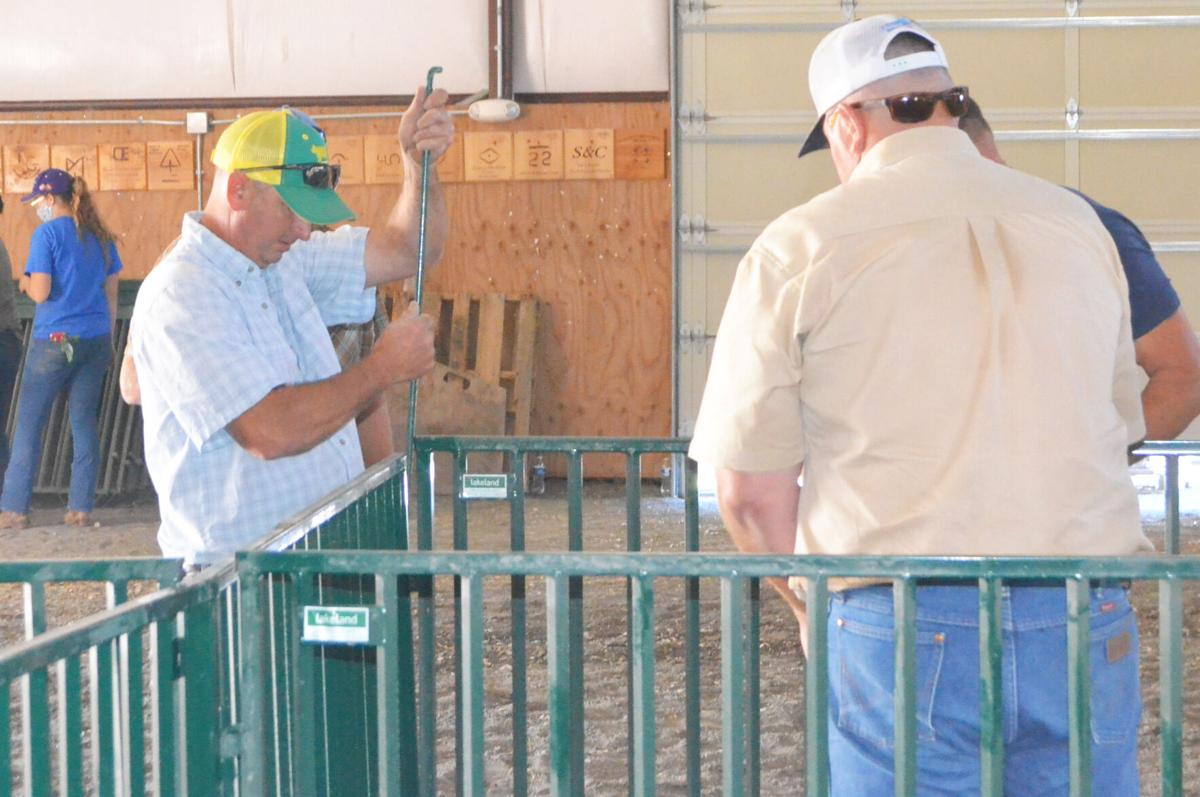 Mark McKay, right, a volunteer, and Wayne Succhorski, Grant Union High School ag shop teacher and FFA advisor, set up for the youth livestock show Saturday at the Grant County Fairgrounds Heritage Farm. McKay was one of many volunteers who stepped up to help despite not having a kid showing animals this year. 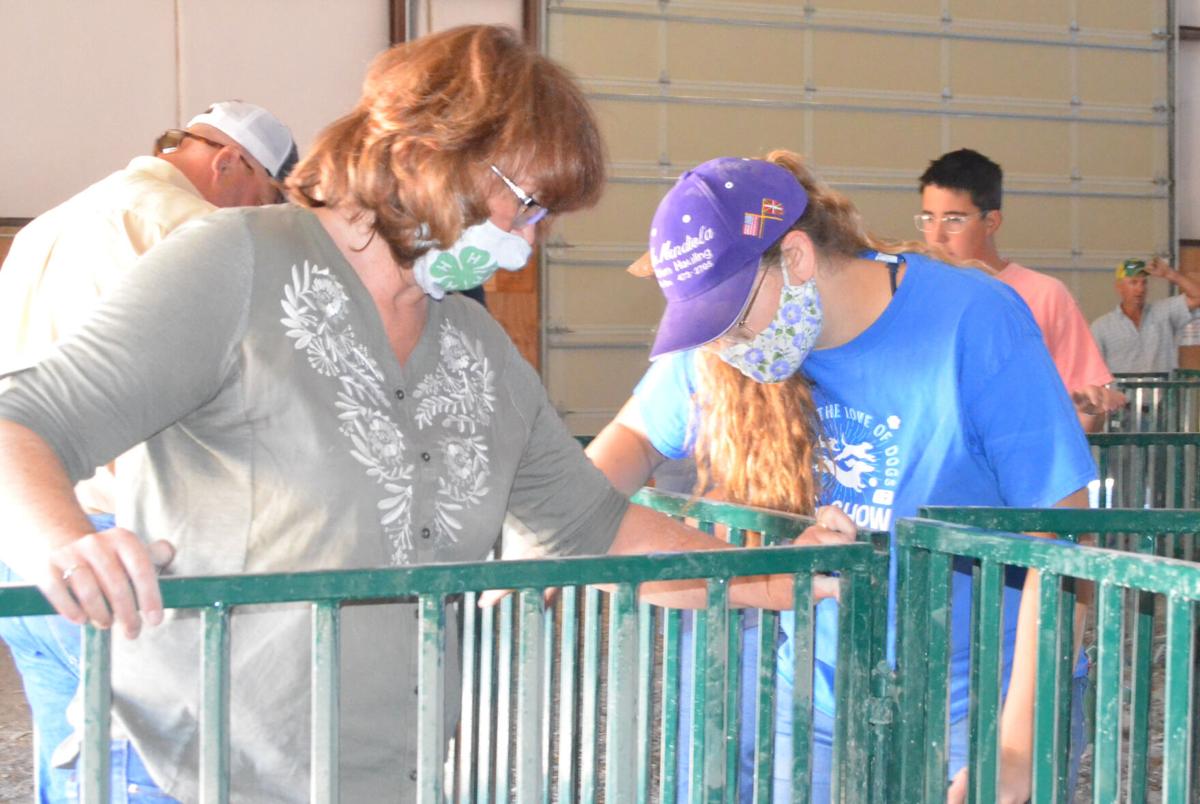 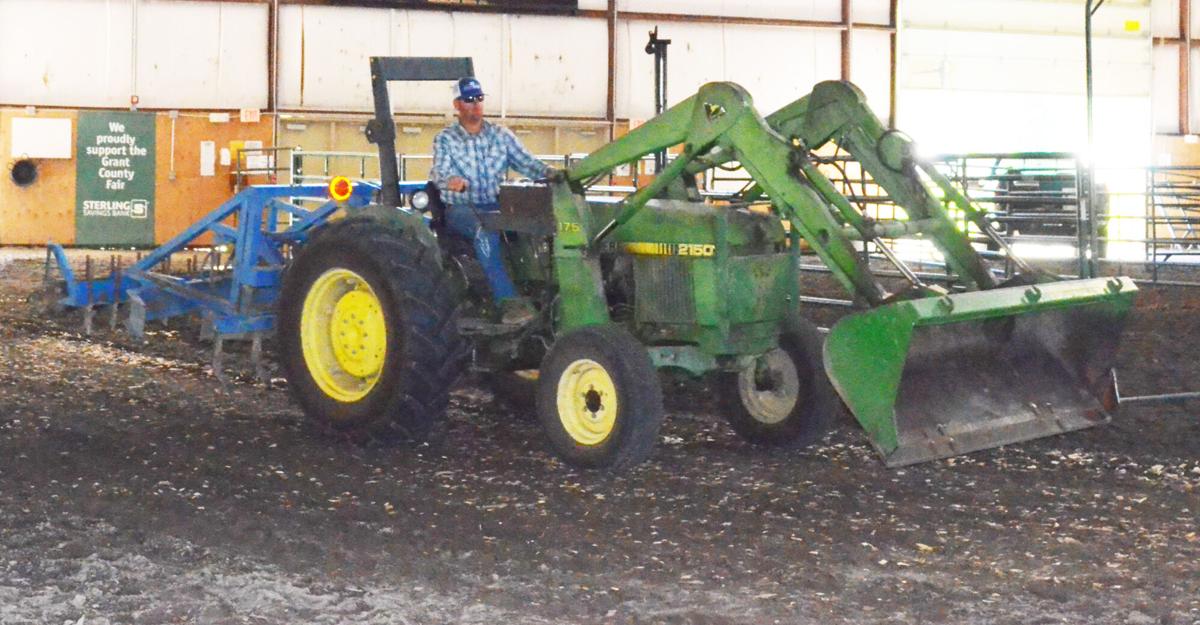 Fair board member Jake Taylor moves wood chips to the Heritage Barn at the Grant County Fairgrounds Saturday ahead of the youth livestock show. Les Schwab lent the organizers the tractor, according to volunteer Doug Cox.

Mark McKay, right, a volunteer, and Wayne Succhorski, Grant Union High School ag shop teacher and FFA advisor, set up for the youth livestock show Saturday at the Grant County Fairgrounds Heritage Farm. McKay was one of many volunteers who stepped up to help despite not having a kid showing animals this year.

Fair board member Jake Taylor moves wood chips to the Heritage Barn at the Grant County Fairgrounds Saturday ahead of the youth livestock show. Les Schwab lent the organizers the tractor, according to volunteer Doug Cox.

Local kids in 4-H and FFA showed off their hard work Sunday as a masked, modified and spaced-out iteration of the Grant County Fair’s livestock show kicked off in the Heritage Barn. Fair activities continue through Saturday.

The community, he said, is small enough to hold an in-person event safely and within the state’s guidelines.

“These kids still need that contact and need to understand that the people in our community want to see them,” he said. “A lot of these kids just need to know someone cares about them. ... They need someone to tell them they’re doing a good job and the end of the rainbow is coming soon.”

John Day resident and 4-H volunteer Doug Cox said Dole personally thanked him last week and expressed how much it meant to have the opportunity to show his animal in person.

“It wouldn’t have been the same online,” he said. “And if it was not for everything they did to make this happen, I wouldn’t have had the chance, and I wanted to let them know how grateful I was.”

Cox moved to John Day two years ago after he retired from automotive management. His corporate position allowed him to donate to kids in 4-H, but because of the travel demands of his job, he could not volunteer and work with kids.

Cox said the Oregon State University Extension Office 4-H team has been awesome to work with, especially in putting together a plan that met the state’s guidelines to hold the livestock shows.

“It would have been easy to cancel the events and put them online,” she said.

Waggoner said the Grant County Health Department at one point assisted with the plan, and Christal Culley, 4-H education program assistant, said the Emergency Operations Center, when it was fully staffed, contributed to the plan as well.

Culley said the uncertainty of the process and “fear of the unknown” were difficult to overcome at times.

Culley said intern Maggie Justice, who grew up in Grant County and participated in 4-H and FFA, helped keep everyone’s spirits up with her positive attitude.

Culley said, as a local, Justice was also a familiar face for parents and kids.

Callie Moss, superintendent of the static 4-H displays, said the group builds lifelong skills that kids take into adulthood. Moss said the kids learn to see a project through until it’s finished.

Moss said the kids in her group were able to adapt to staying in contact through text messages, a Facebook group and Zoom meetings.

Moss, who teaches food preservation and leathercraft, posted an assignment for the kids to cook an item and then have a family member review it.

She said as a leader she gets close to her kids and it is “heartbreaking” when they have setbacks or fall short with a project.

Moss said she had a student who was disappointed with how a food preservation project turned out. She said while it was hard for the student, they looked at what went well, what went wrong and what they can do next year.

Another challenge due to the pandemic, she said, was the cancellation of clinics she started holding for the kids to help them fine-tune their projects ahead of the exhibition.

“COVID stopped us from having clinics,” she said. “That was our biggest thing is the challenges with not being able to do these clinics with the kids.”

Laura Brown, leader of of the Canyon Creek 4-H group, said not being able to connect with her kids face to face was a huge challenge.

She said she had the option to video conference with her group, but the internet connection where she lives is unreliable, as it is for some in her group as well.

While the youth might benefit financially at the end of their projects if they earn a high enough ribbon, the main purpose and value of the FFA and 4-H is youth development.

“It’s about youth development and getting these kids educated in whatever projects they’re doing right that’s number one,” she said. “I know a lot of families that were put on the back burner while they figured out distance education to finish out the rest of the year. And this detracted from the 4-H and the youth development program we have here.”

For volunteer Randy Cearns of Mt. Vernon, whose two grandchildren showed lambs this year, said the lack of in-person meetings was tough on his younger grandaughter Madilyne Cearns, 10, since this was her first year.

Cearns, who has volunteered in the past, was asked to help this year.

“I am happy to help,” he said. “The kids have put a lot of time into raising their animals.”

He said he is grateful, with this being his granddaughter’s first year, that the community was able pull off the event.

“We didn’t know from one day to the next if they’d be able to do it,” he said. “We are so grateful they were able to make it happen. I don’t care if I have to wear a mask. I just want to be here for the kids.”

"We didn't know from one day to the next if they'd be able to do it. We are so grateful they were able to make it happen. I don't care if I have to wear a mask. I just want to be here for the kids."