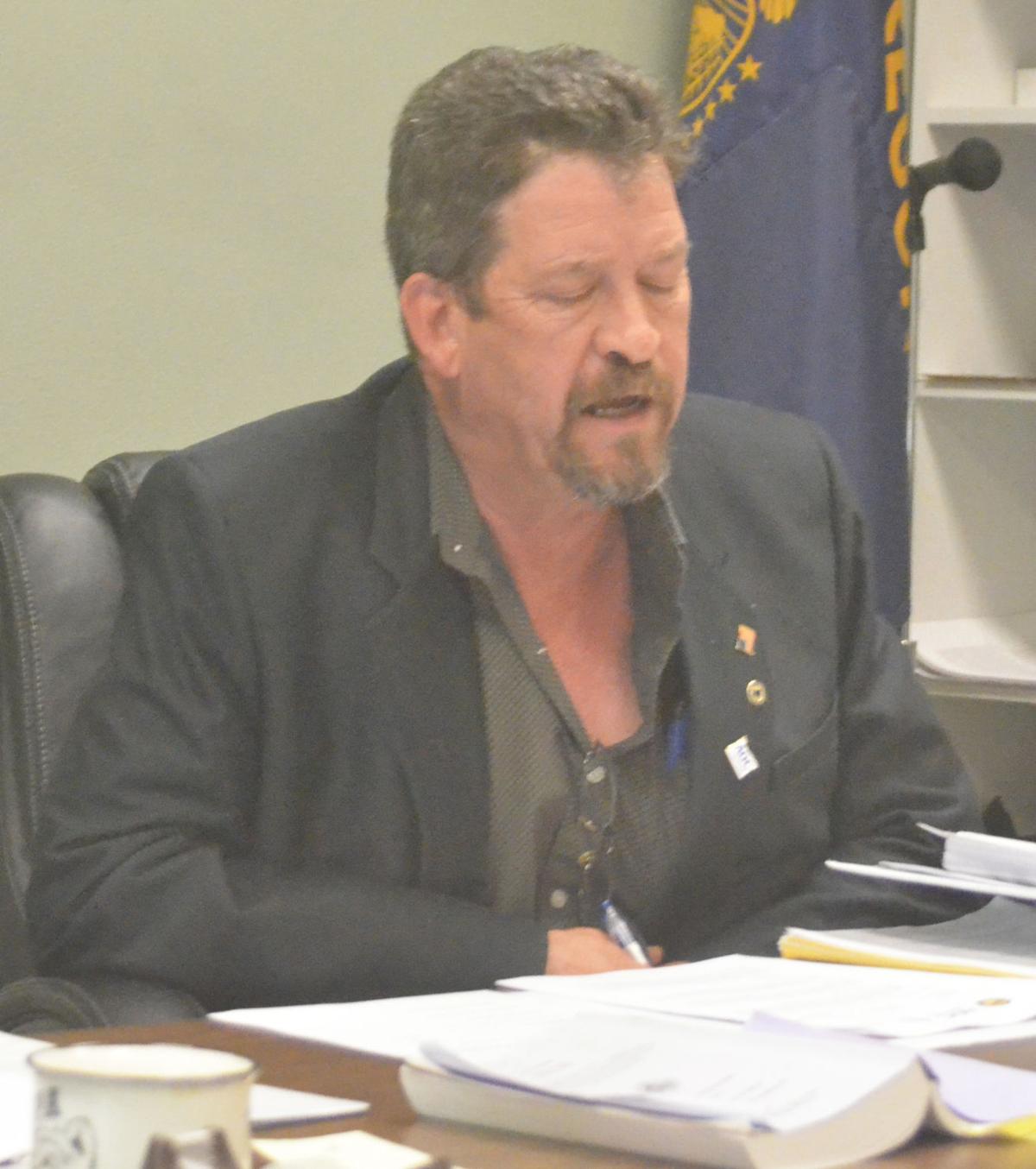 Grant County Commissioner Jim Hamsher said the Emergency Operations Center stayed under its “proposed” budget of $250,000, but according to the approved meeting minutes, the court approved only $125,000 with the plan to come back in 45 days to reassess. 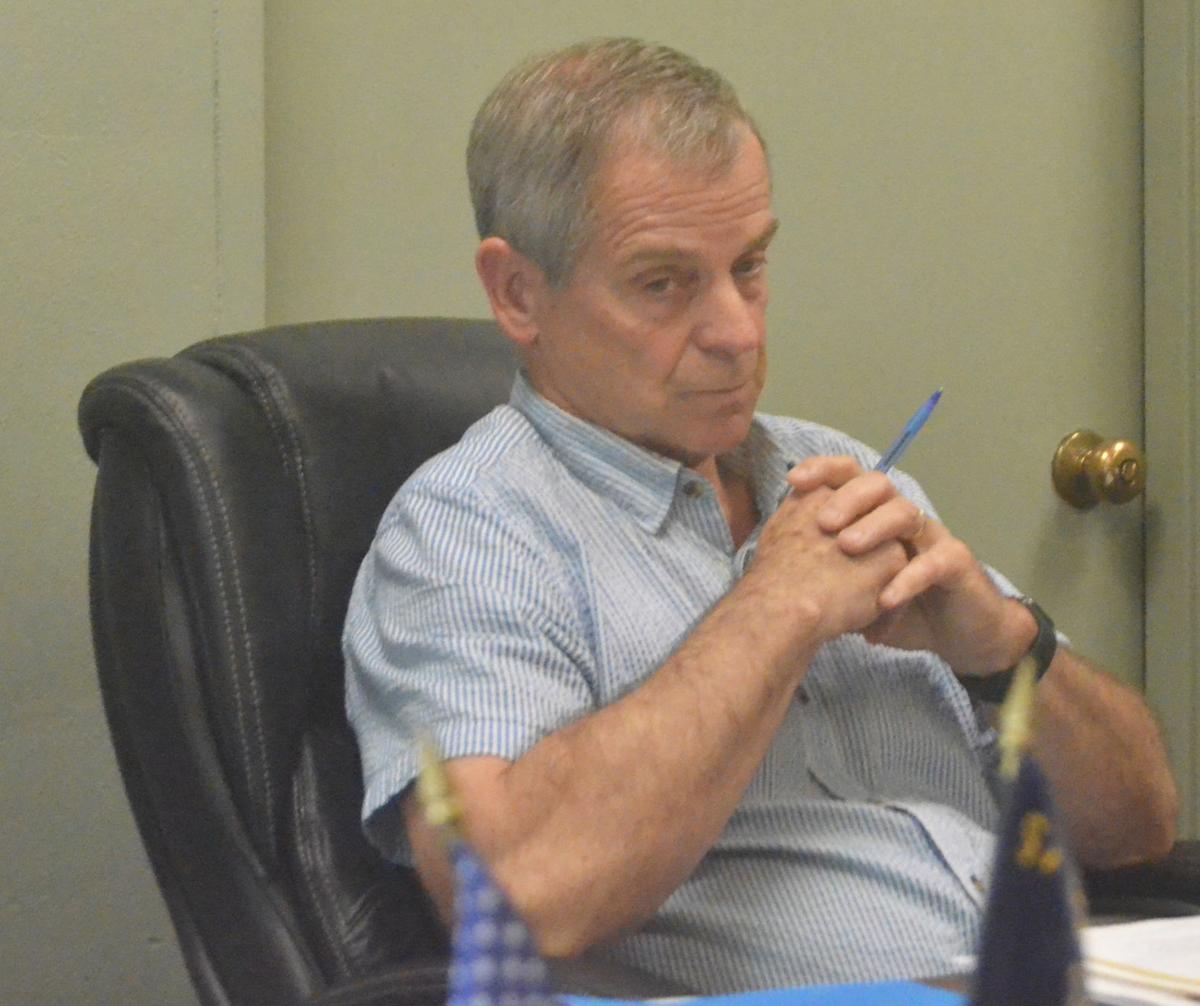 Grant County Judge Scott Myers listens during Wednesday’s County Court session. Myers said the Emergency Operations Center, which overspent its budget by $75,000, did not reach out to the court for additional funding. 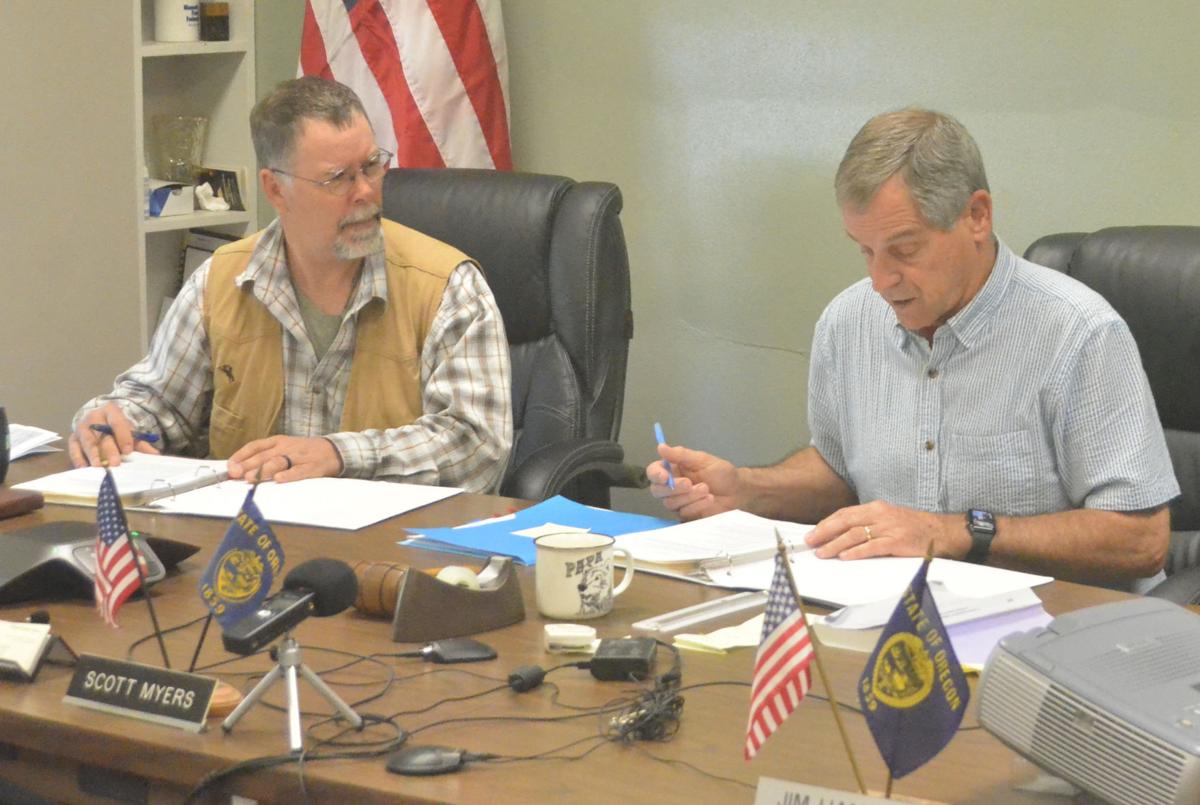 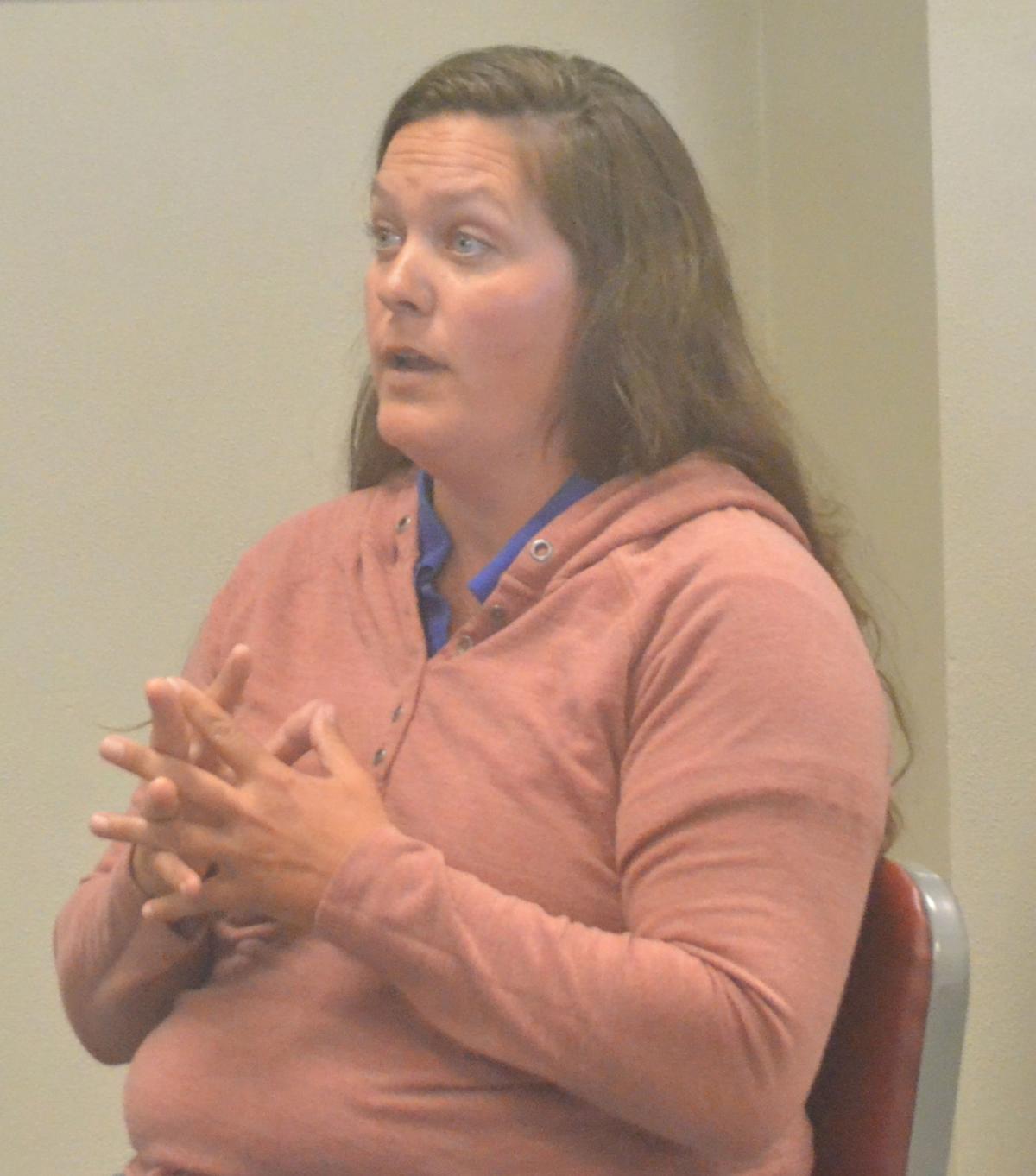 Grant County Regional Airport Manager Haley Walker asked the County Court Wednesday what the Emergency Operation Center’s long-term plan will be now that county offices have reopened. Walker said the EOC, which has rented office space in the airport terminal, will need to ensure common areas are available to the public.

Grant County Commissioner Jim Hamsher said the Emergency Operations Center stayed under its “proposed” budget of $250,000, but according to the approved meeting minutes, the court approved only $125,000 with the plan to come back in 45 days to reassess.

Grant County Judge Scott Myers listens during Wednesday’s County Court session. Myers said the Emergency Operations Center, which overspent its budget by $75,000, did not reach out to the court for additional funding.

Grant County Regional Airport Manager Haley Walker asked the County Court Wednesday what the Emergency Operation Center’s long-term plan will be now that county offices have reopened. Walker said the EOC, which has rented office space in the airport terminal, will need to ensure common areas are available to the public.

County Commissioners Jim Hamsher, the EOC liaison, and Sam Palmer, the EOC public information officer, fended off criticism and touted both the accomplishments and fiscal responsibility of the EOC during a contentious Grant County Court session June 10.

During a May 27 update of the EOC’s finances, Dobler presented a document that appeared to be working from the $250,000 amount, a figure not approved by the court.

Grant County Treasurer Julie Ellison said during Dobler’s presentation to the court that the EOC would need a budget transfer to make payroll and pay bills.

Documents presented to the court by Dobler show the EOC obligated nearly $200,000 in payments for personnel services and supply procurements.

The court, when it approved Dobler’s procurement request, added the direction that “any future purchases over $200 would need to be approved by the county court,” according to the approved meeting minutes.

Despite the court’s direction and unanimous vote, Hamsher said the rule was something Grant County Judge Scott Myers wanted. He said Oregon law gives counties additional flexibility with expenditures after declaring an emergency.

“I think (the $200 limit) was in the motion, but it doesn’t make it, you know, make it so,” Hamsher said Thursday. “It’s just like we can approve anything.”

Oregon law allows counties to “enter into contracts and incur obligations necessary to mitigate, prepare for, respond to or recover from an emergency or major disaster,” but the section about county emergencies does not mention superseding other state laws, such as requirements for meetings to be open to the public, prohibitions on members of a governing body meeting in private to deliberate and requirements for public notice and written minutes.

Myers said the motion for court approval of purchases over $200 was a motion approved by the court.

“It’s not a written resolution. It’s a motion by the court and passed unanimously by the court — moved, seconded and passed,” he said. “It is not variable.”

Hamsher said the direction to get approval by the court for purchases of over $200 would not work during an emergency.

“You can’t bring (expenditures of) 200 bucks to a court meeting during an emergency,” he said. “Especially when you can’t have meetings (because of social distancing guidelines), so that’s why they have (Oregon Revised Statutes) that allow you to do that kind of stuff.”

Hamsher said, with the courthouse shut down under Brown’s social distancing guidelines, the court could not meet until Brown passed her April 15 executive order “authorizing state and local governments to take necessary measures to ensure continued operations and public participation in decision-making during the COVID-19 pandemic.”

“The governing body of a public body shall hold public meetings and hearings by telephone, video or through some other electronic or virtual means whenever possible,” the order states.

Brown’s order allows for public comment to be taken by phone, email, text message and by mail.

Hamsher said the court members, instead, approved the purchases outside of court, mostly through email without public deliberation.

Palmer said the purchase agreements were signed by all three members of the court.

“All three of the purchase agreements were signed by the court,” he said. “It just didn’t happen at a county court meeting.”

Palmer said, during the COVID-19 crisis, the governor’s office has been unclear about public meeting rules.

Myers said, while COVID-19 is still a declared emergency statewide, the county court is mandated to follow public meeting laws throughout the pandemic.

Myers said Hamsher and Palmer are mistaken. He said, if there is an immediate emergency, the court can get together and make a decision.

“Right now, if the creek is flooding, we can get together and make a decision without an announcement,” he said. “But that doesn’t mean, three months later, they can get back together and talk about what to do next about the creek bed and what happened in the flooding. Otherwise you’re bending the rules to suit your situation, and that’s what gets elected officials in trouble.”

Palmer said, with two members of the court at the EOC, they tried to “play it safe.” He said the staff at the EOC knew that if he was in a room with Hamsher one of them would not talk so it would not be misconstrued as deliberating on county business because it would have been a quorum of the county court.

In retrospect, Palmer said he did not ever think about calling a county court session to amend the previous motion requiring purchases of $200 to be approved by the court.

As far as going over the approved budget, Palmer said the meeting minutes reflect that he pushed for the full $250,000 initially requested by the incident commander. He said, had they voted to fund the full amount, they would not have had to go back to the court and end up in the situation they are in now.

“I guess, if we were to just keep the whole budget, we wouldn’t have had to return to court to do it, and if it got spent, we get reimbursed, if it doesn’t get spent, we don’t put in for the reimbursement, and we are good to go,” he said.

Hamsher, however, maintained that the EOC was within its proposed budget and said it is inaccurate to say the EOC was over-budget.

“I think that it was understood that this was going to cost more money,” he said. “Our incident commander did send out budget updates.”

If there were concerns about the budget, he said, Myers or county Treasurer Julie Ellison — who told the court May 27 the EOC needed a budget transfer to make it through the end of the fiscal year — should have put a budget resolution on the court’s agenda.

Myers said, however, reaching out to the court for additional funding is the responsibility of the department head.

“Nowhere do we call somebody or remind somebody, ‘Remember, you’re supposed to come and ask us for more money,’” Myers said. “That is the department head (responsibility), and at this particular time, the department head and liaison were Hamsher and Dobler. They should have put together a plan. I don’t know how much staff they need, so why would I be the one that decides?”

During county court, Hamsher said other departments, including the Planning Department and Veterans Department, also required budget transfers to make it through the fiscal year when neither is not considered over-budget.

The planning director position was changed from three-quarters time to full time during the year so the Planning Department required a boost from the General Fund of $4,500 for Personnel Services and $6,000 for Materials & Services.

Myers said the budget transfers included a cash infusion to the EOC from the General Fund of $37,152 for Materials & Services.

“I was a little more generous with purchases,” Palmer said. “I’ll admit it. But only because the county needed the items. If not for this emergency for the next.”

Every first responder in the county, from fire chiefs to ambulances, now has a high-powered radio in case communications should go down because of the EOC procurements, he said..

Palmer said he poured his “heart and soul” into the EOC because it was what he was elected to do, and he and the EOC staff tried to put out as much information to the community as they could through the website, grantcountycovid.com.

“I apologize to the people in the community if there wasn’t as much transparency as they wanted, but I felt we stayed engaged as best we could,” he said.

Hamsher, who previously said up to 100% reimbursement was possible through Coronavirus Aid, Relief and Economic Security Act, said Monday that he received confirmation from the executive director of the Association of Oregon Counties that Grant County will receive $335,000 toward COVID-19-related costs. He said he expects to see the funds deposited into the county’s account within the week.

“That is for everything we tagged as a COVID-19 expense,” she said.

Shelman said Monday that the state has given counties more guidance to ensure the money is spent correctly.

The state, said Shelman, is developing a 21-page document that the county will then sign and return, and as soon as it is received the money will be issued.

Compared to other counties, Palmer said Grant County is somewhere in the middle.

The EOC’s future will be discussed in a special session of county court June 17, Hamsher said.