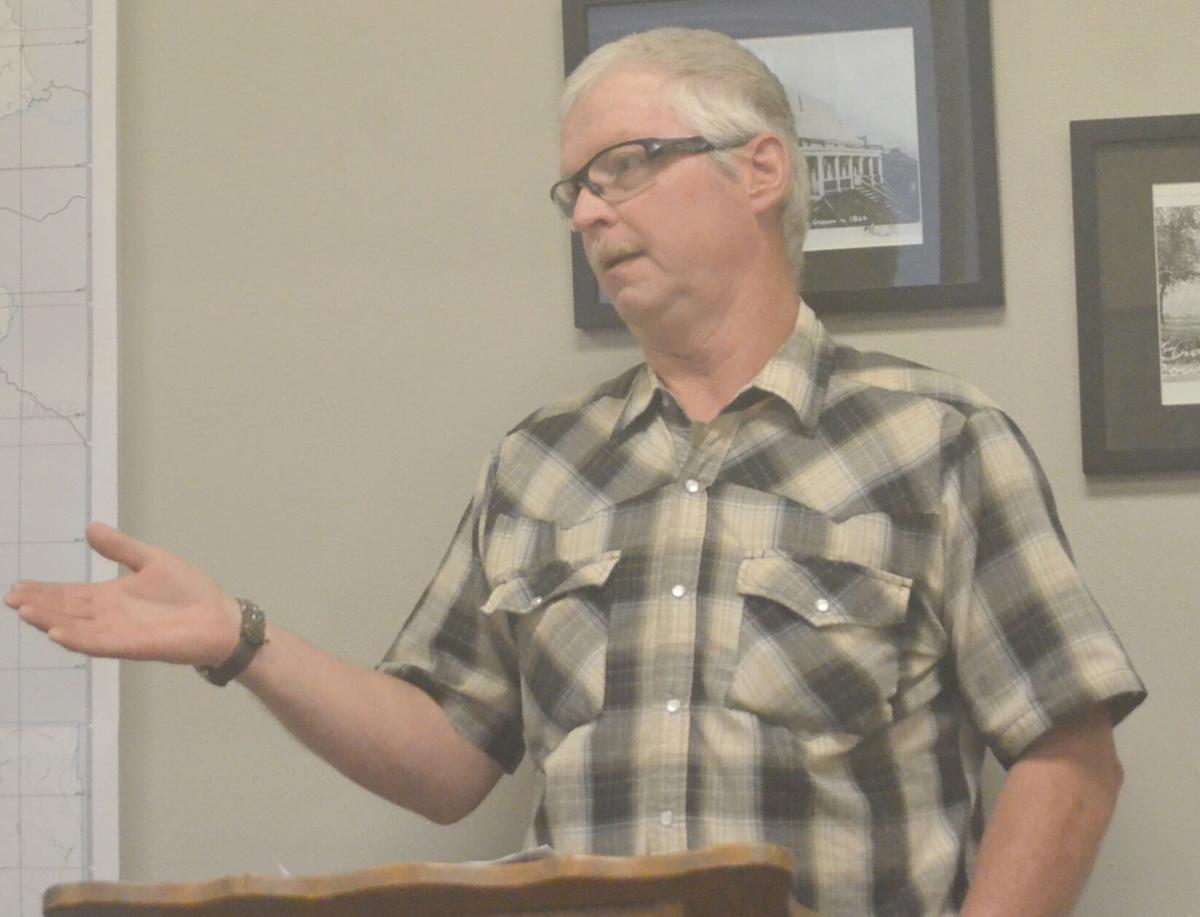 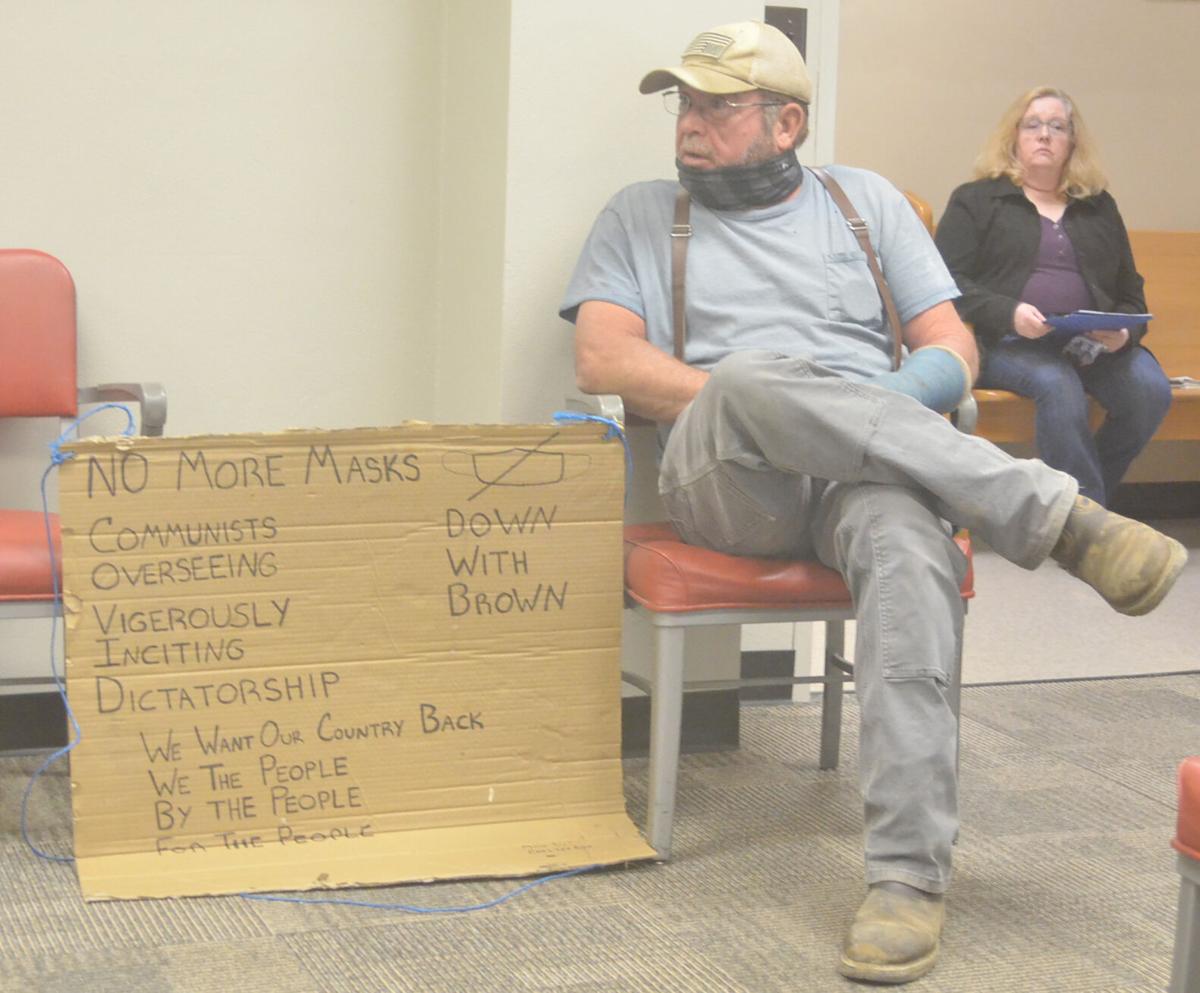 Grant County resident Rex Blackstone questions County Judge Scott Myers as to why he could not have his sign in the courtroom. 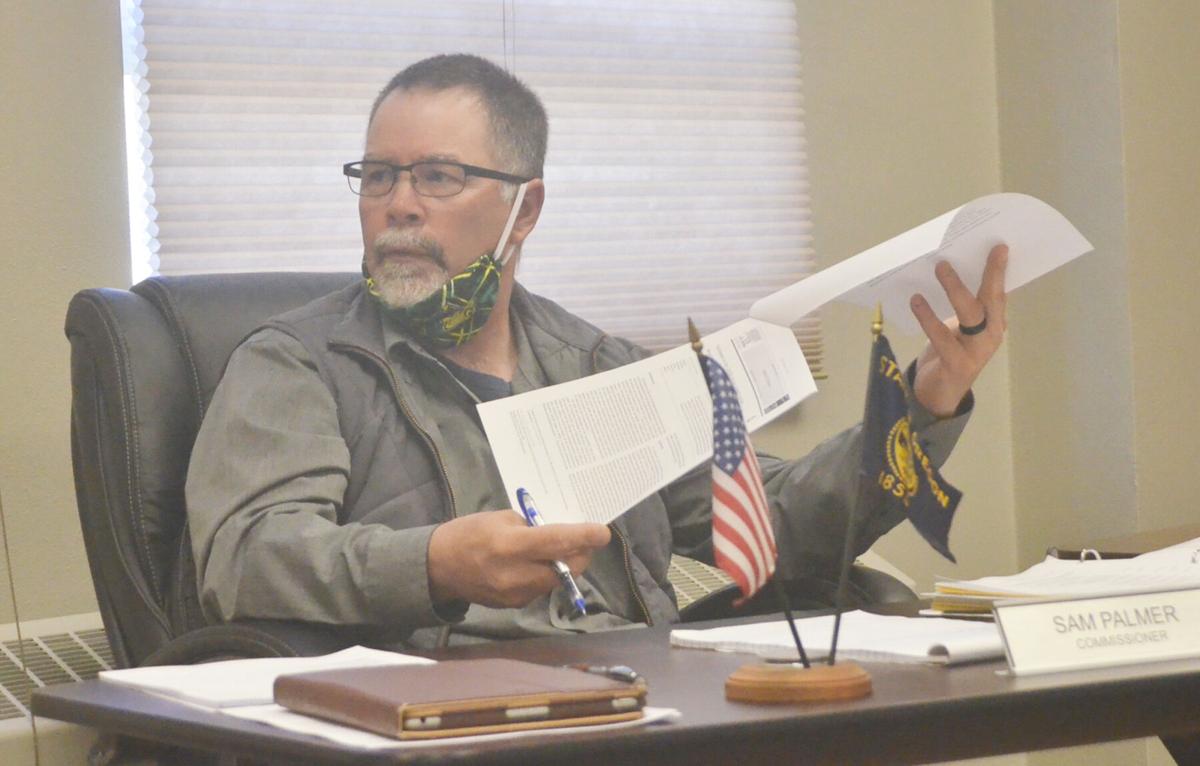 County Commissioner Sam Palmer holds up a widely debunked study disputing the effectiveness of masks during the April 28 session of Grant County Court. Stanford University put out a statement on its website stating the article’s author has no affiliation with the institution, which supports mask use to stop the spread of COVID-19. 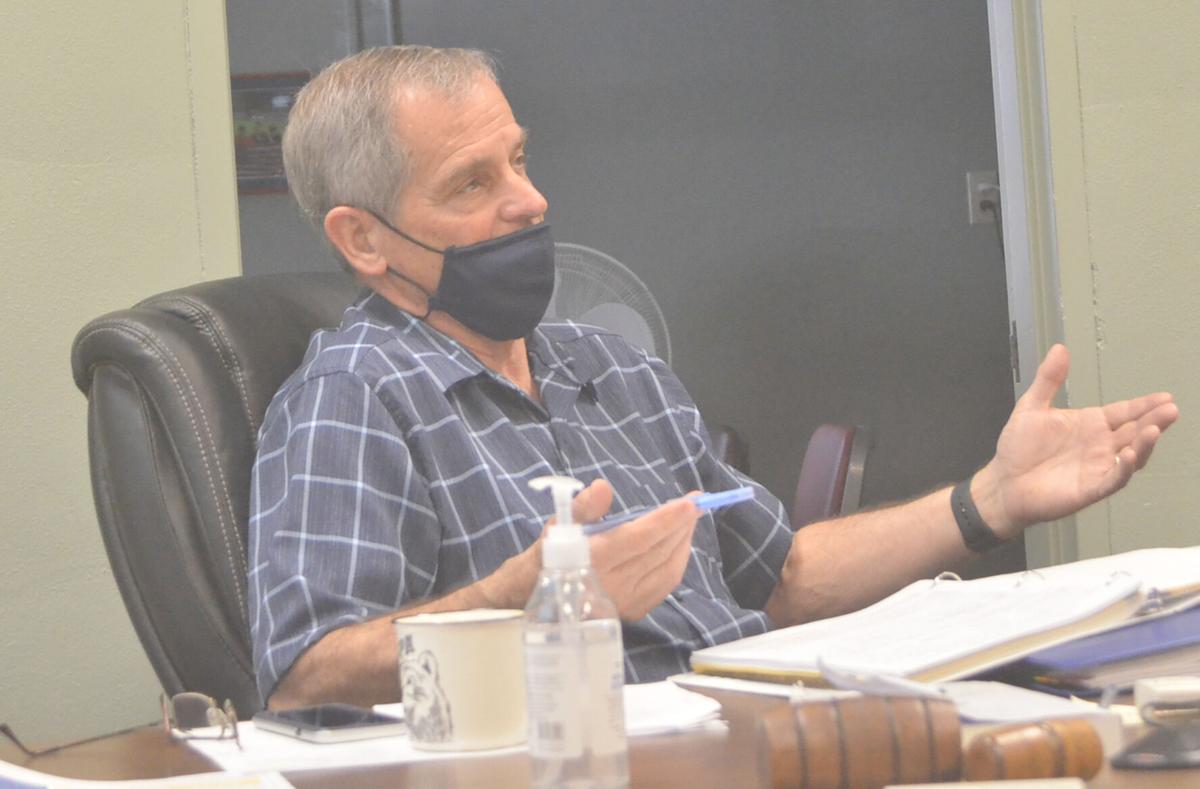 Grant County resident Rex Blackstone questions County Judge Scott Myers as to why he could not have his sign in the courtroom.

County Commissioner Sam Palmer holds up a widely debunked study disputing the effectiveness of masks during the April 28 session of Grant County Court. Stanford University put out a statement on its website stating the article’s author has no affiliation with the institution, which supports mask use to stop the spread of COVID-19.

Tensions are flaring over COVID-19 — and so is misinformation.

Several residents urged Grant County leaders to publicly proclaim the county would not comply with Gov. Kate Brown’s executive orders designating “extreme risk” and banning indoor dining at restaurants and bars in 15 counties, including Grant, to slow a spike in COVID-19 infections at the April 28 county court meeting.

Letters of opposition were sent to Brown by U.S. Rep. Cliff Bentz, state Sen. Lynn Findley and state Rep. Mark Owens, all Republicans, and a group of 27 county commissioners, including Grant County’s Sam Palmer and Jim Hamsher, along with the Association of Oregon Counties and the Oregon Restaurant and Lodging Association.

“Respectfully, enough is enough,” Findley and Owens wrote, citing the impact on small businesses and stating no evidence has shown that small businesses spread COVID-19 while following the public safety measures.

“It is no coincidence Oregon has not seen one instance of a super spreader event tied to our hospitality industry,” the letter from the commissioners states. “...You must know restrictions on specific types of businesses compared to others within our local communities is creating rifts and dividing people rather than bringing Oregonians together.”

The frustration expressed at the county, state and national levels was evident at the April 28 county court meeting, when County Judge Scott Myers asked Rex Blackstone not display the protest sign he brought, stating, “No more masks,” “Down with Brown” and “Communists Overseeing Vigerously Inciting Dictatorship (sic).”

Bill Newman from Monument told the court, if residents want to get their country back, it would need to start in the county.

When county court members explained the county could get sued if it failed to follow the guidelines and could lose state funding for schools, hospitals and other programs, Newman asked if the money was worth it.

“Somebody has got to grow a spine and stand up,” he said. “Regardless of whether you expect results from it or not.”

Despite echoing many of the valid opinions that were expressed in the letters to Brown, however, many of the arguments made in Grant County also relied on misinformation.

Masks and the ‘Stanford study’

Newman said he could not find a “solitary example” that masks help prevent the spread of the virus but claimed to have seen “tamped down” studies showing they are ineffective.

However, according to Stanford’s Senior Manager of Media Relations Lisa Kim, the study’s author, Baruch Vainshelboim, had no affiliation with the university when the journal, dubbed “Medical Hypothesis,” published the article.

“Stanford Medicine strongly supports the use of face masks to control the spread of COVID-19,” she said.

She said Vainshelboim was a one-term, one-year visiting scholar in 2016 for “matters unrelated” to the 2020 article about face masks.

Palmer, a registered nurse, said the study looked like medical journals he reads to stay current with changes in medicine.

“Maybe I should have done a little more homework,” he said. “But I’ll own what I did.”

Palmer issued an apology to Myers, Hamsher and Grant County’s residents for quoting the debunked study.

Still, as a “health care advocate,” Palmer said he does not believe masks are the answer to curbing the spread of COVID-19.

“The preponderance of public health data is overwhelmingly in favor of how efficacious masks are at preventing the spread of flu and other respiratory viruses,” he said.

Newman said the pandemic is a “ruse to gain power.”

Myers pointed out the virus had been a “deadly ruse, for millions.” COVID-19 has left four dead in Grant County, 577,489 dead in the United States and 3.2 million dead around the world, according to the Johns Hopkins Coronavirus Resource Center.

Newman said there is no question that a “bug” is making people sick, but suggested it is on par with the common cold or flu. However, in the U.S., the Centers for Disease Control reports the flu only claims between 12,000 to a maximum of 61,000 lives each year.

Dr. Anthony West, a senior research specialist at the California Institute of Technology, said in an email Sunday that a clear indicator that COVID-19 is not like the common cold or flu is the repeated episodes of hospitals becoming overwhelmed by people with COVID-19 that have severe symptoms.

Andrew Pekosz, Ph.D., a leading virologist who works on both the flu and COVID-19 at Johns Hopkins University, told the Eagle that COVID-19 is much worse than the flu “in almost every parameter of comparison.” The coronavirus, he pointed out, has killed more Americans in about a year than the flu has in over five years.

He said a lack of preexisting immunity to the virus, compared to the flu, also makes COVID-19 a more significant burden on the population. Additionally, the long-term effects outpace the flu as well. Those effects include shortness of breath, trouble focusing and kidney and heart problems, he said.

Newman also suggested the flu was being misdiagnosed as COVID-19 and asked what happened to the flu this year.

In 2021, health officials estimate the U.S. has only seen upwards of 900 cases this year as of January.

However, Eili Klein, Ph.D., associate professor of emergency medicine at the Johns Hopkins University School of Medicine, said the significant decrease in flu cases this year is proof the safety measures to curb COVID-19 work. In a press release, he said that physical distancing, masks and handwashing have slowed the transmission of the flu.

Politics, polarization and sorting out the facts

Newman said he is an Independent when it comes to political affiliations and that the country has become more and more divided surrounding COVID-19. He said, while he will not get the COVID-19 vaccine, he is not an “anti-vaxxer” against all vaccinations.

He said politics did not drive his reasons for appearing before the court. Instead, he told the Eagle the lockdowns have contributed to the “erosion of people’s constitutional rights.”

“It’s not Democrat or Republican thing in any way, shape, form or fashion,” he said.

He told the Eagle that simple, straightforward information is what earns his trust in the sources he reads when it comes to research, news and information in general.

Newman said 90% of people have made up their minds about what they believe when it comes to COVID-19.

“You’re not going to change anyone’s mind,” he said. “The other 10% have their head in the sand.”

Kamil said people of particular “political leanings” feel that scientists are trying to shut down society.

“It’s quite the opposite,” he said. “The scientists largely do not want to shut things down.”

Kamil said people should seek out their own sources for information, but think critically about the source and ensure it is one that is reliable.

“Be conscious about where your risk is at,” he said. “Don’t make it political, because the virus doesn’t care what political party you are, what you think about politics. It’ll kill you just the same, especially if you’re not vaccinated.”

"You're not going to change anyone's mind. "The other 10% have their head in the sand."

"Be conscious about where your risk is at. Don't make it political, because the virus doesn't care what political party you are, what you think about politics. It'll kill you just the same, especially if you're not vaccinated."