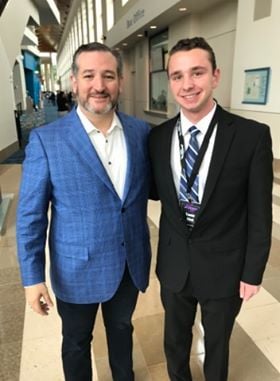 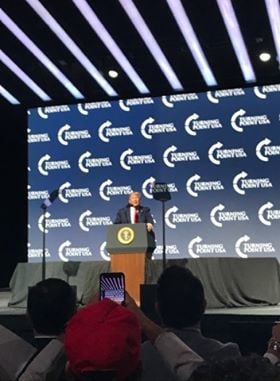 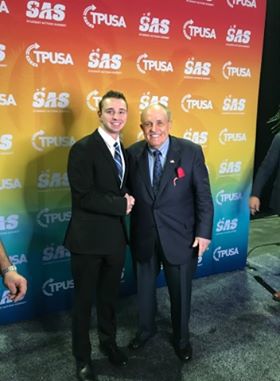 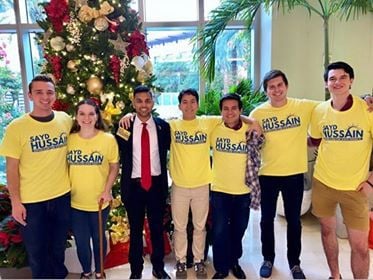 Young conservative students from around the nation gathered to listen to Trump talk about his presidency, the economy, immigration, impeachment and more. Most of the 5,000 students attending were seated on a first-come, first-served basis, Elliott said, but he had his seat reserved.

Elliott — who ran for Grant County commissioner in 2018 and has served on county committees — said he enjoyed the energetic atmosphere of his fellow young conservatives.

“The craziest moment was when he first walked out,” Elliott said. “It’s actually happening. You’re seeing the president of the United States who is the most powerful person of the free world. He’s not as orange as he looks on TV.”

Elliott said Trump doesn’t give speeches that are as charismatic as previous presidents such as Ronald Reagan or Barack Obama, but he did notice that engagement with the audience and their feedback is where Trump’s charisma shines.

Trump interacted with the crowd by allowing two students go on stage to speak and also asked the audience if they preferred “Keep America Great” or “Make America Great Again.” Both slogans were met with cheers, and Trump decided to keep the two slogans, Elliott said.

“It was a loud atmosphere, that’s for sure,” he said. “I have never heard USA chants that loud before, and then they started the ‘four more years’ chants, and that also got loud. It was remarkable to be honest.”

As Trump’s speech concluded, he left the stage and walked near the audience where people were jumping over chairs and frantically rushing to get a chance to shake hands with the president, Elliott said. He decided to let the crowd near him go for it, but he acknowledged how rare it was for him, as a Grant County resident, to have been so close to the president.

“Not that many people can say they saw the president three days after he was impeached, whether you agree with that or not,” Elliott said. “It’s historic, and this president will be one of the most remembered presidents in our history.”

Elliott said he agreed with Trump’s message on the economy and against socialism and on his accomplishments such as getting out of North American Free Trade Agreement and appointing 187 conservative federal judges.

Optimism for the future

Trump gave his speech on Dec. 21, near the end of the Student Action Summit Conference that began Dec. 19 and ended Dec. 22. This gave Elliott an opportunity to listen to speeches from multiple conservative leaders and activists such as Glenn Beck, Rush Limbaugh, Laura Ingraham and many others.

Elliott increased his connections by meeting with other people his age from Poland, England, the United Kingdom and from different parts of the U.S. Sayd Hussain, a 21-year-old junior at Florida Atlantic University, is running for state representative in Palm Beach, and Elliott had the chance to meet him.

“He’s a year and a half older than me, and it was inspiring and cool to see that somebody who was a White House intern last year has already been elected to a local board,” Elliott said. “It’s somebody who reminded me of myself, who attempted at making change at such a young age, and he is succeeding so far.”

“Not that many people got to meet Ted Cruz, and I know this because he was walking through the hotel lobby and I followed him and stopped to see what he did,” Elliott said. “He stopped at the end of the hall to talk to 10 kids and take pictures with him, and then I went down there to meet him and take a picture.”

Cruz made a remark in his speech on Dec. 20 that resonated the most with Elliott. Cruz talked about how people from other countries like Mexico or Cuba are trying to get into the U.S., but people in the U.S. never leave.

“People aren’t leaving this country, even if a celebrity says they are going to leave if the president is re-elected,” Elliott said. “There are no other countries in the history of countries that have risen so many people out of poverty than this country.”

The conference concluded, and Elliott embarked on the 11-hour flight, with a delay included, from Florida to Boise. The flight gave him a chance to look over Chicago and the Great Lakes and to talk to some of the friends he made from Florida.

Elliott plans to continue his political career by taking advantage of opportunities and continuing to get involved with politics in Oregon.

“I’m getting involved in helping Oregon state Senator Cliff Bentz’s campaign for Congress,” Elliott said. “I’m paying attention to political opportunities in Eastern Oregon, and the opportunities are there. I’d like to start my political career in Oregon.”

As part of a new generation of future politicians, Elliott said his generation has an ample amount of enthusiasm and energy, but the generation can be misunderstood at times.

He said, while some in the generation are misinformed, the same can be said about other generations. Technology is also changing things, he said.

“I’d say we’re very smart because we are the first generation to be born in technology, and we are getting information faster than any generations in the world’s history,” Elliott said. “Our generation is going to shake things up.”

Elliott said the Republican Party is going in the right direction with the message of free enterprise, supporting our troops, standing by the Constitution and country values. However, he thinks the party needs to make more progress with diversity.

“The Republican Party needs to reach out to minorities,” Elliott said. “We are making that progress in great strides, but I think we can do a better job.”

For other young people looking to be politically active, Elliott’s advice is to get involved, stand by your values and don’t let anybody shut you down.

“Most importantly, be open-minded and be tolerant of others’ ideas,” Elliott said. “Never be closed-minded because they are a Democrat or a Libertarian or an Independent because you always learn things from the people that you disagree with.”

George Clooney was shunned by Hollywood after movie flop

Bruce Springsteen: I'm at the 'middle' of my life