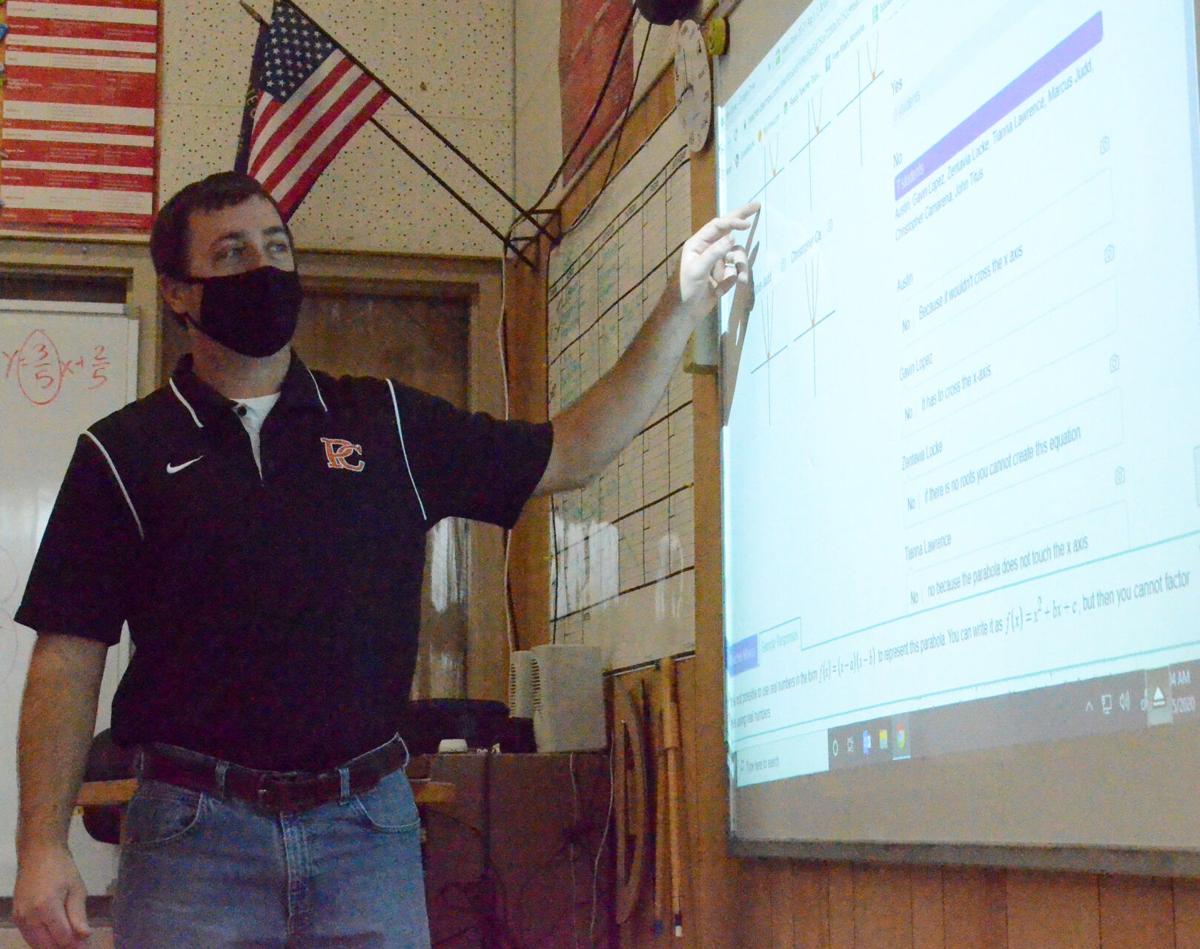 Billy Colson teaches math, is the athletic advisor and coordinates senior projects at Prairie City School. He was named the 2020 Grant County School Employee of the Year. 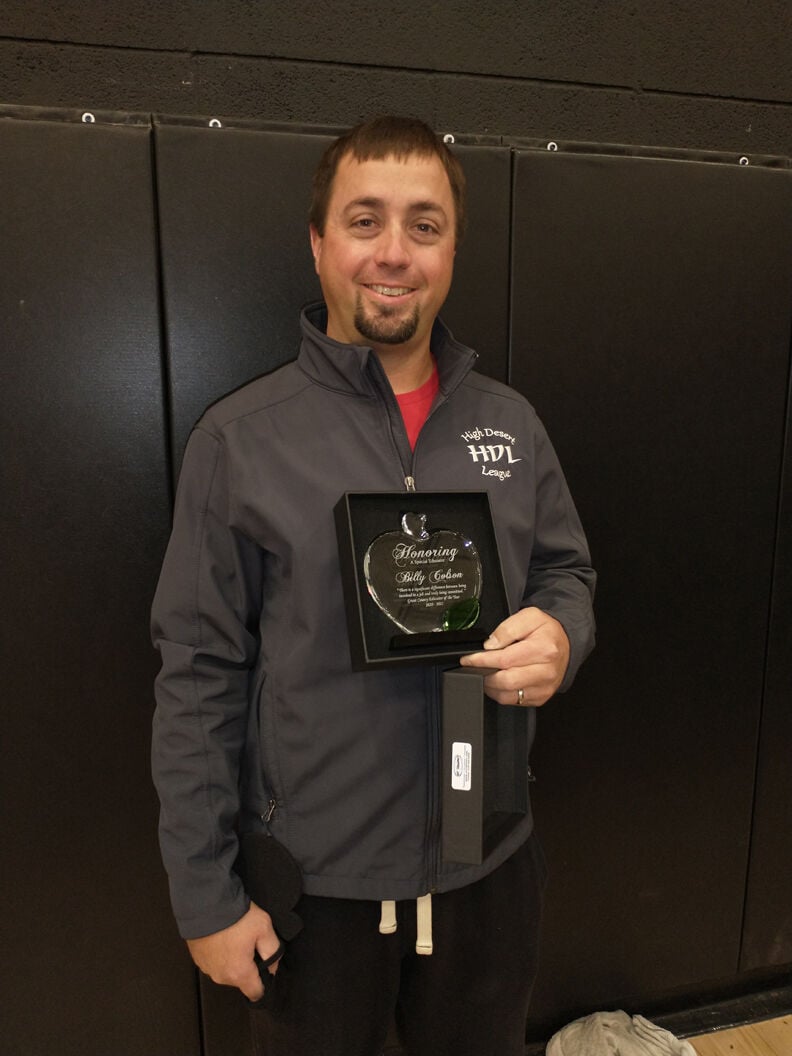 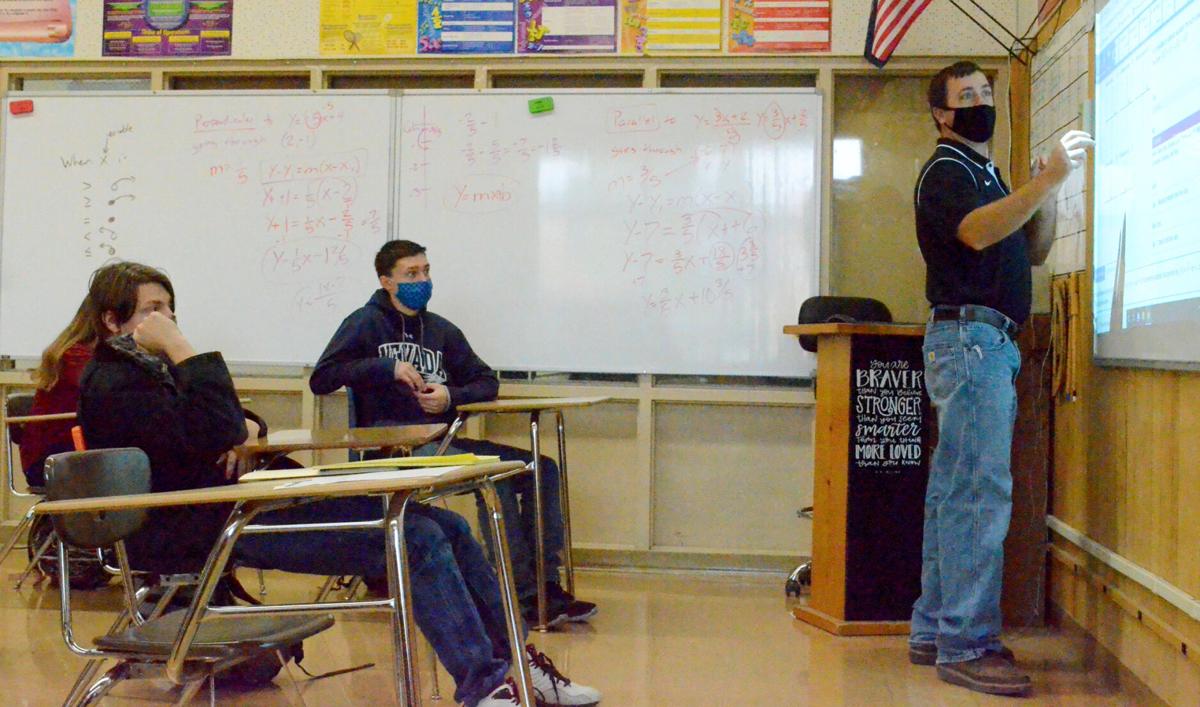 A Prairie City School class watches Billy Colson as he teaches imaginary numbers and how to graph them. 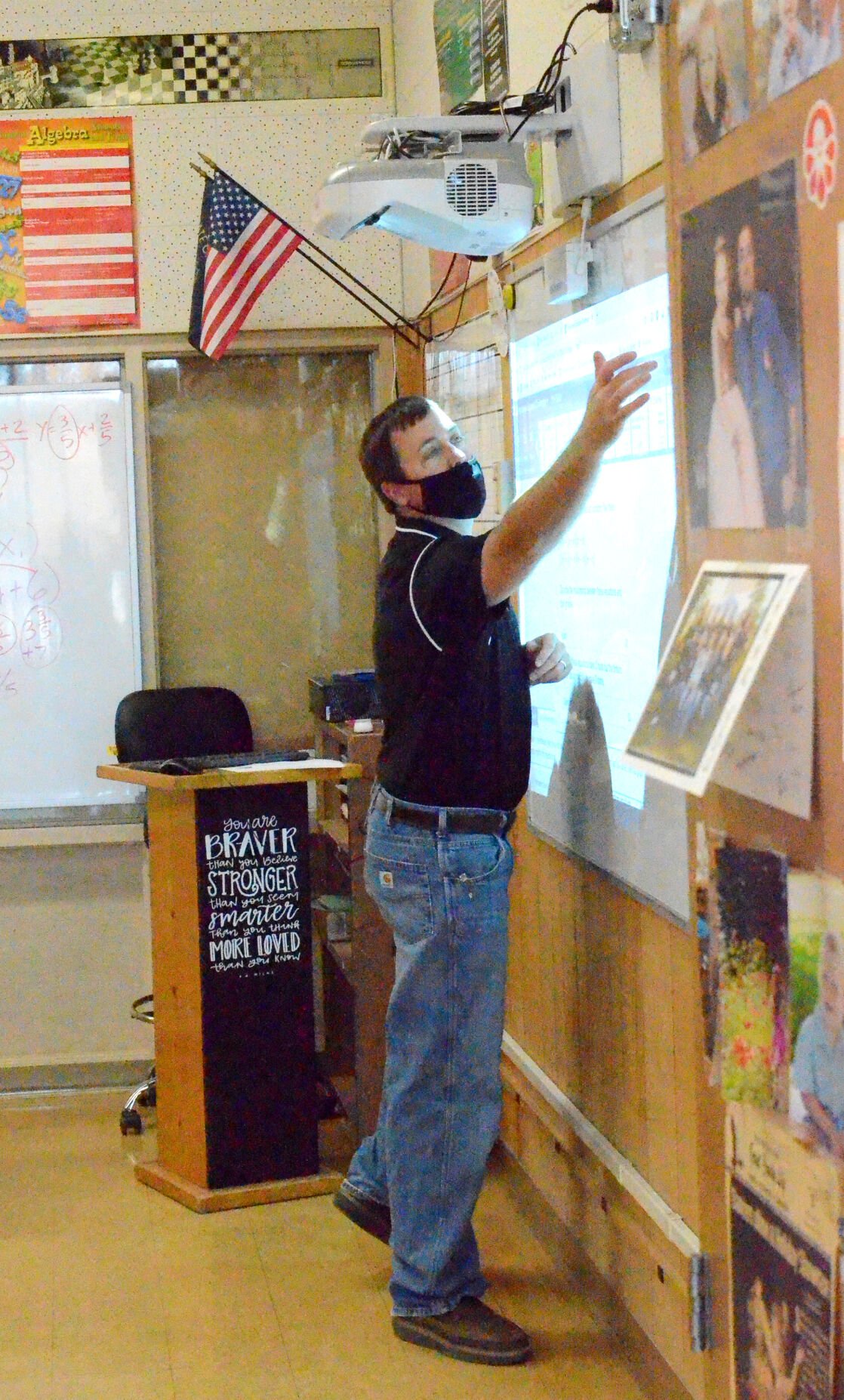 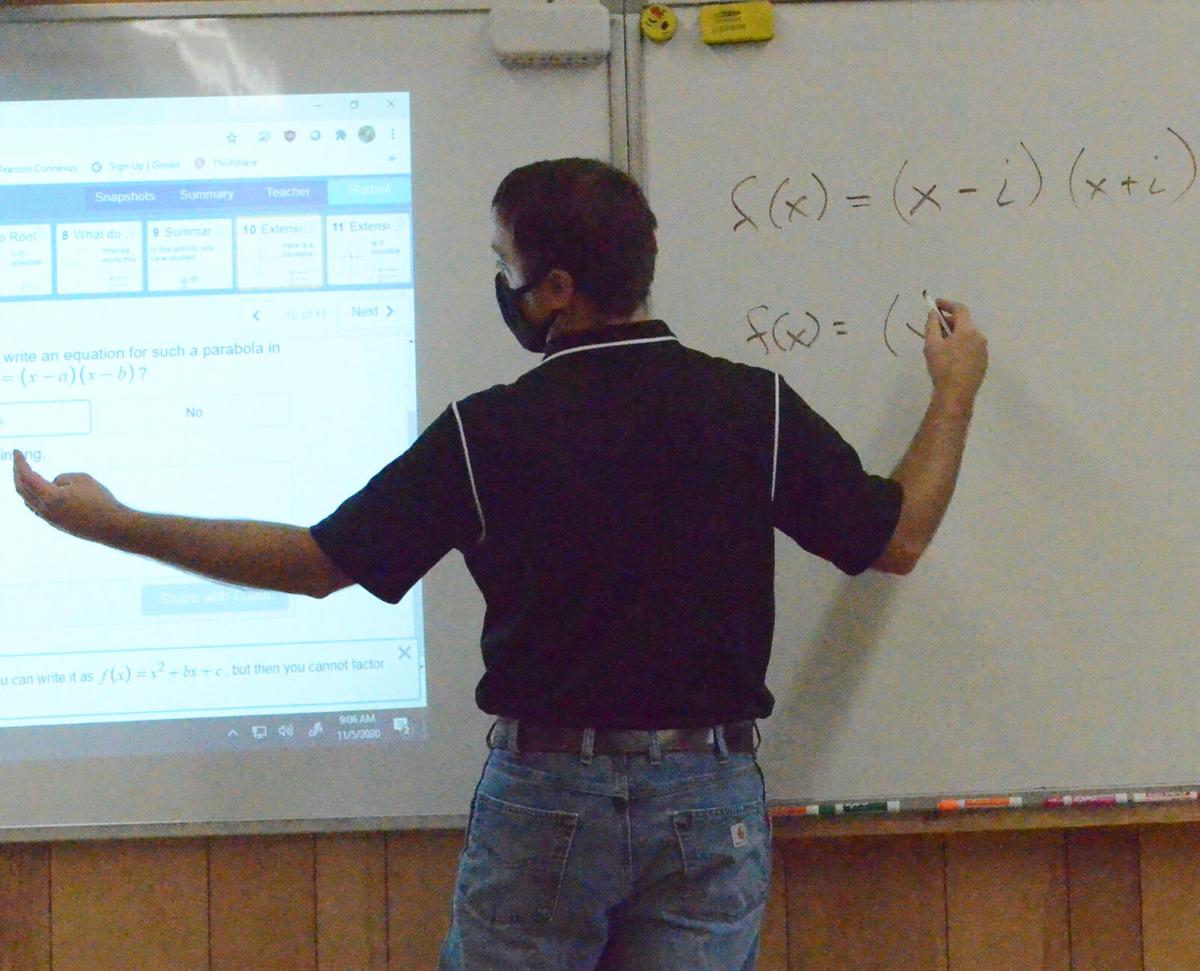 Billy Colson teaches his class at Prairie City School imaginary numbers and how to graph them.

Billy Colson teaches math, is the athletic advisor and coordinates senior projects at Prairie City School. He was named the 2020 Grant County School Employee of the Year.

A Prairie City School class watches Billy Colson as he teaches imaginary numbers and how to graph them.

Billy Colson teaches his class at Prairie City School imaginary numbers and how to graph them.

Colson got the award during an assembly in the Prairie City gym on Oct. 26 in front of staff and students.

The 2020 Grant County School Employee of the Year was awarded based on letters of recommendations received from the staff at Prairie City School. The selection committee then chose Colson to be the recipient of the award.

“It was very nice, and it was gracious of people to think that way,” Colson said. “I appreciate it.”

Colson has taught at Prairie City School for 12 years and has many different responsibilities at the school, according to Prairie City Superintendent Casey Hallgarth.

Hallgarth said Colson’s ability to build relationships with students and being firm but fair with those who might struggle in class creates a great balance.

Colson spends an abundant amount of time with seniors to help them build a plan for life after graduation, he said.

“That’s where Billy and I are on the same page. We celebrate a plan and not just for students who want to go to a four-year school,” Colson said. “What about the kid that just wants to go into the workforce, or the military? We celebrate and plan for them all.”

Hallgarth said planning with seniors has led to Colson having a great connection with students after graduation.

Colson said one of his goals is being involved with the school as much as he can while helping others.

“If people need assistance with something I try to help and try to have a personal relationship with students and staff here at school,” Colson said.

He said, with the size of the school, it is easy to develop a personal connection with students and sometimes their families. If a student graduates and leaves, the connection continues with the family when he gets updates on how kids are doing after graduation.

Prairie City graduates also keep in touch with Colson to ask questions that arise at college.

“There’s always something they’re not sure of because college is hard for kids to transition to out of high school,” Colson said. “They go from having advocates all over the place and then they go to college, and they’re on an island by themselves essentially where they’ve got to figure everything out.”

Colson said a prominent highlight of being a teacher comes from witnessing the academic and emotional growth of his students and possibly playing a role in that development.

“Just watching the growth of the kids and the benefit of seeing that, hoping that you had some kind of small part to do with it,” Colson said. “It’s nice to have those kids come back years later and say thanks.”

Colson said most kids don’t realize how much the school does for them, but when they come back years later they share their appreciation for what they were given.

Another goal Colson has for himself is to continue developing his skills as an educator. He is a part of a collaborative group of math teachers from different schools and counties that meet on a weekly basis.

“That’s made me more goal oriented towards the different avenues of education than just teaching on the boards,” Colson said.

Hallgarth said what sets Colson aside from other teachers is his drive to continually learn new things while applying his own touch in the process.

Austin Cates, a junior at Prairie City High School and one of Colson’s students, said Colson is a very enthusiastic teacher and it’s easy to see that he likes his job.

“If you don’t understand something, he’ll go deep down and explain it to you in a way you can understand it,” Cates said. “He’s really fun, and you can talk about other stuff with him.”

Colson said he enjoys working at Prairie City School and appreciates the support from the community.

“I enjoy the staff, and I’ve had huge community support over the years,” Colson said. “The community in Prairie City is all in on the school, and what we need, the community often provides.”

"If you don't understand something, he'll go deep down and explain it to you in a way you can understand it. He's really fun, and you can talk about other stuff with him."

Jane Seymour slams Me Too 'rules'