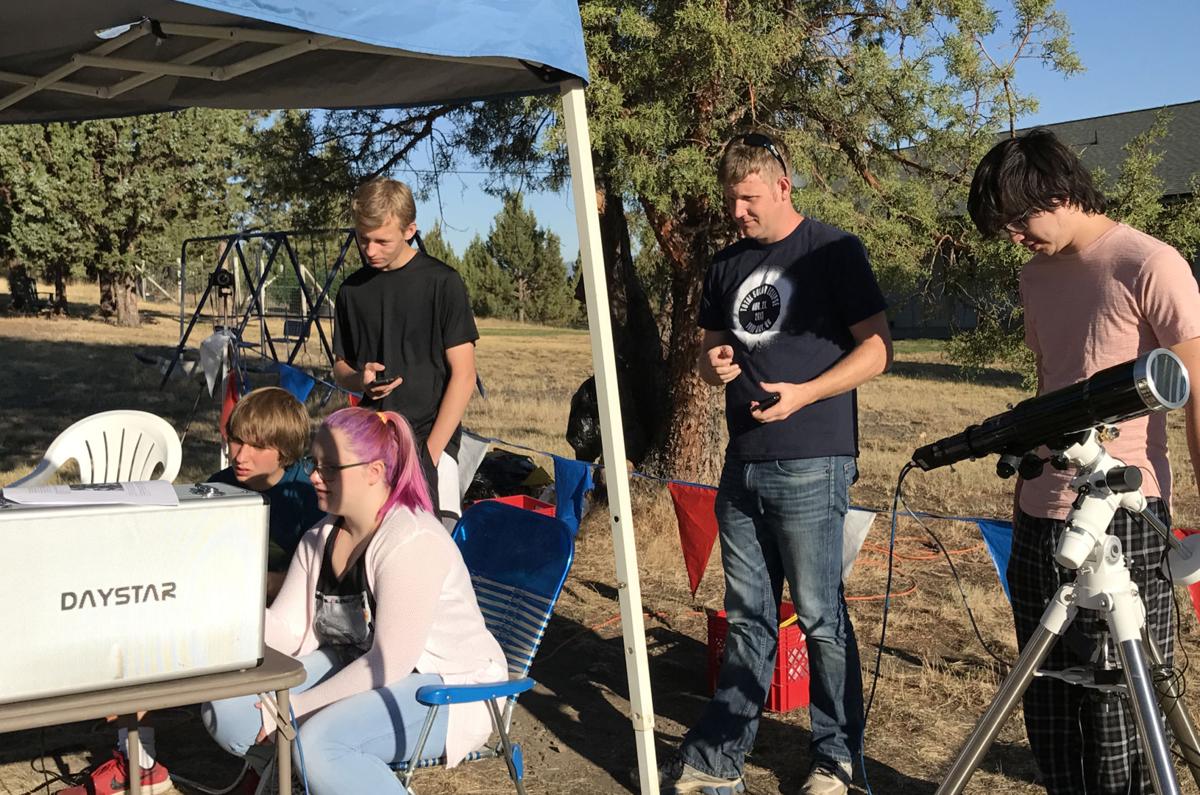 From right to left standing, Anthony Allen, Tom Schad from the National Solar Observatory and Gage Brandon on the day of the eclipse with Donavan Smith, left, and Declan Jensen, right, seated with the computers. 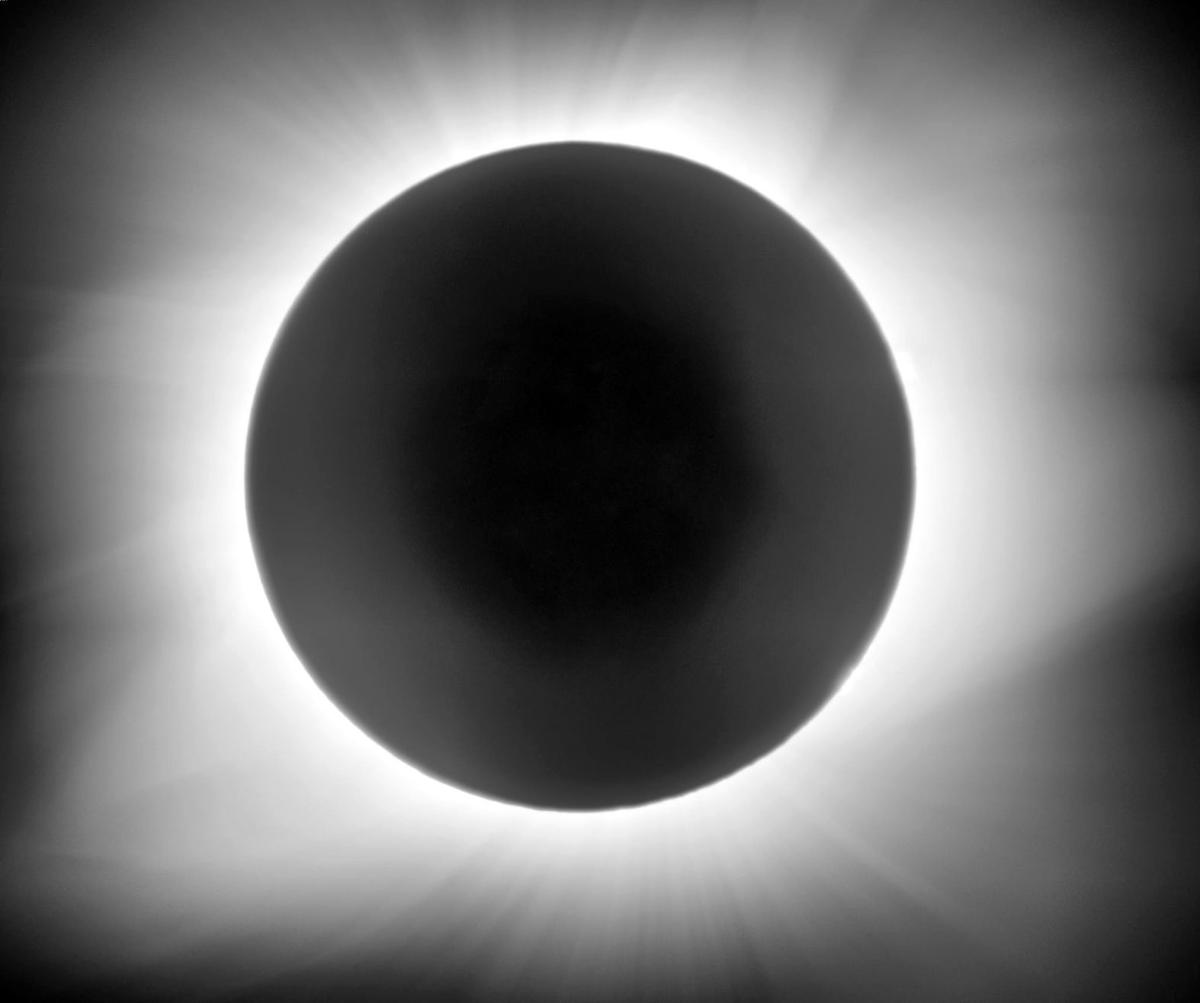 An image of the total solar eclipse taken by Sonna Smith and her students, along with help from astronomer Tom Schad, in 2017 in John Day. 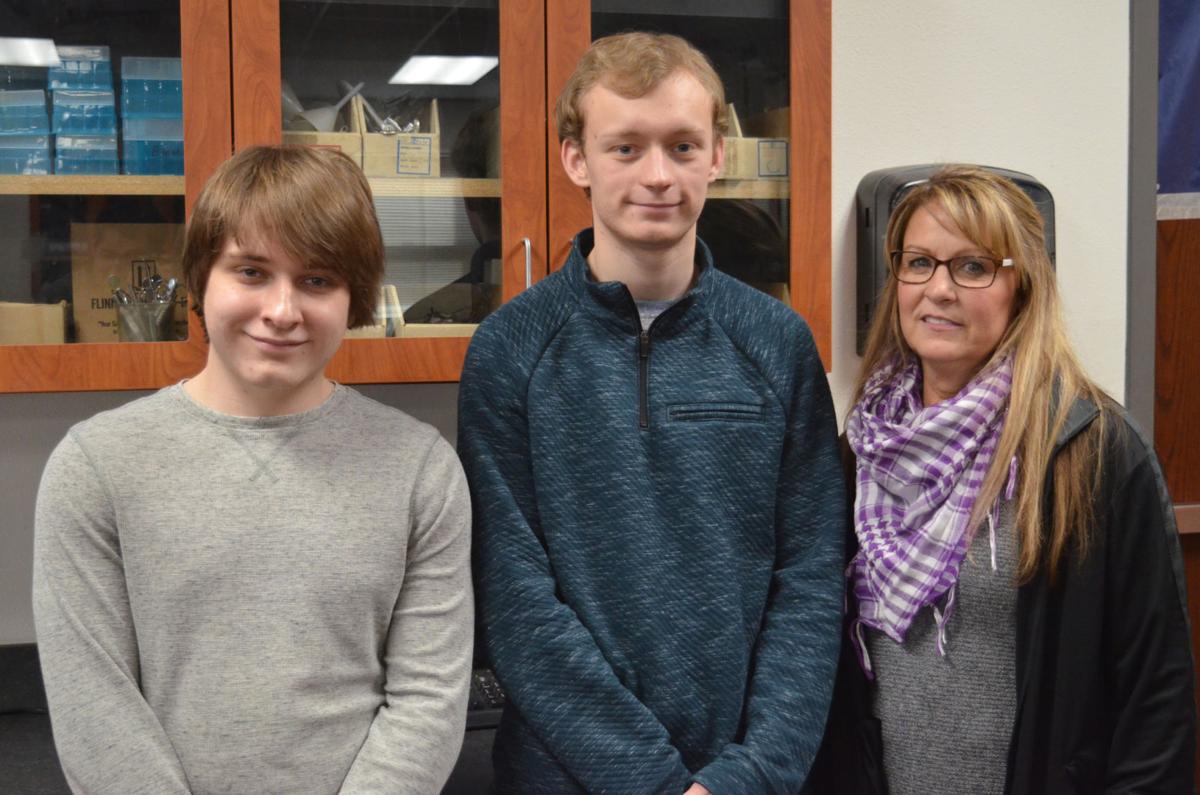 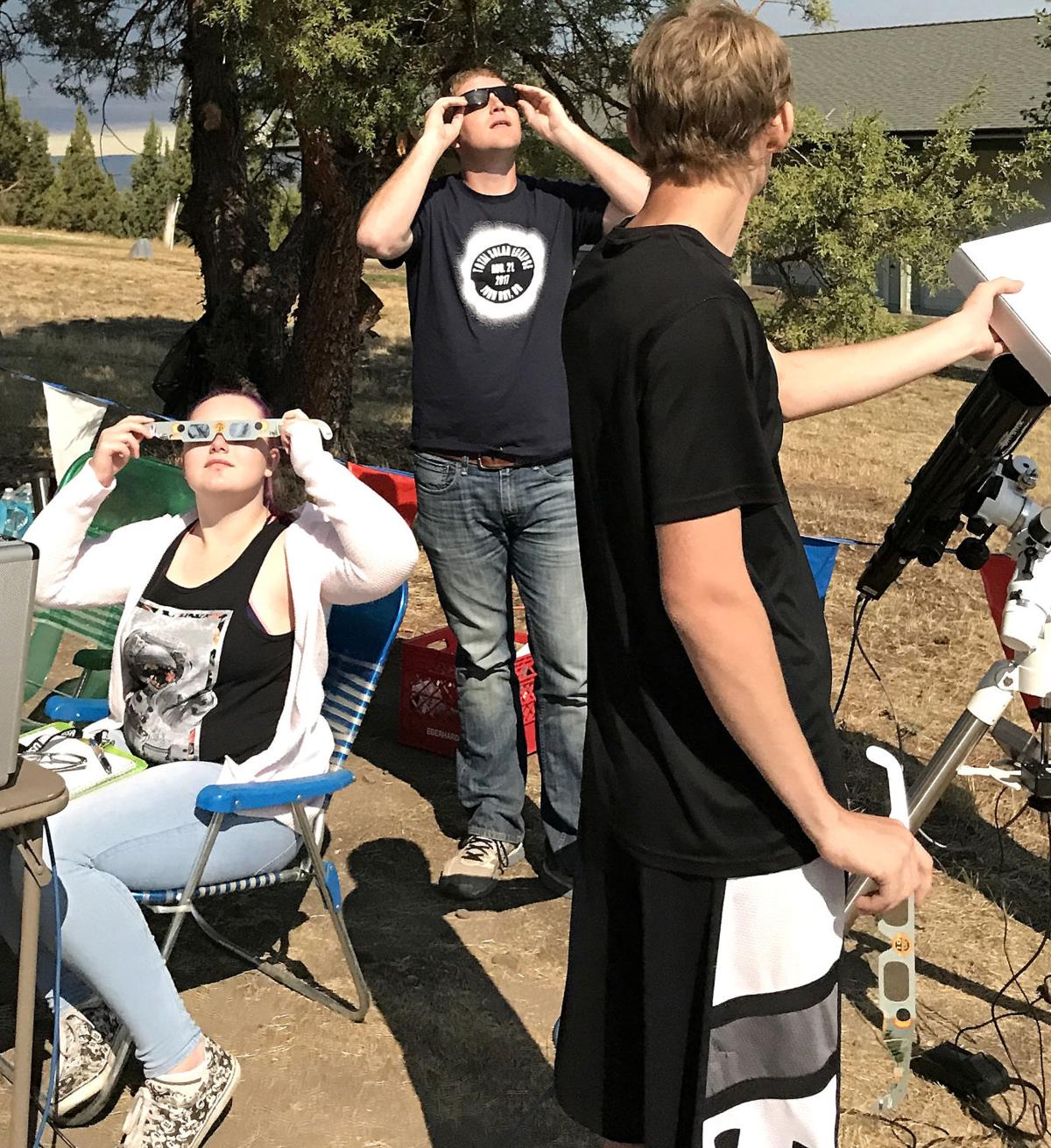 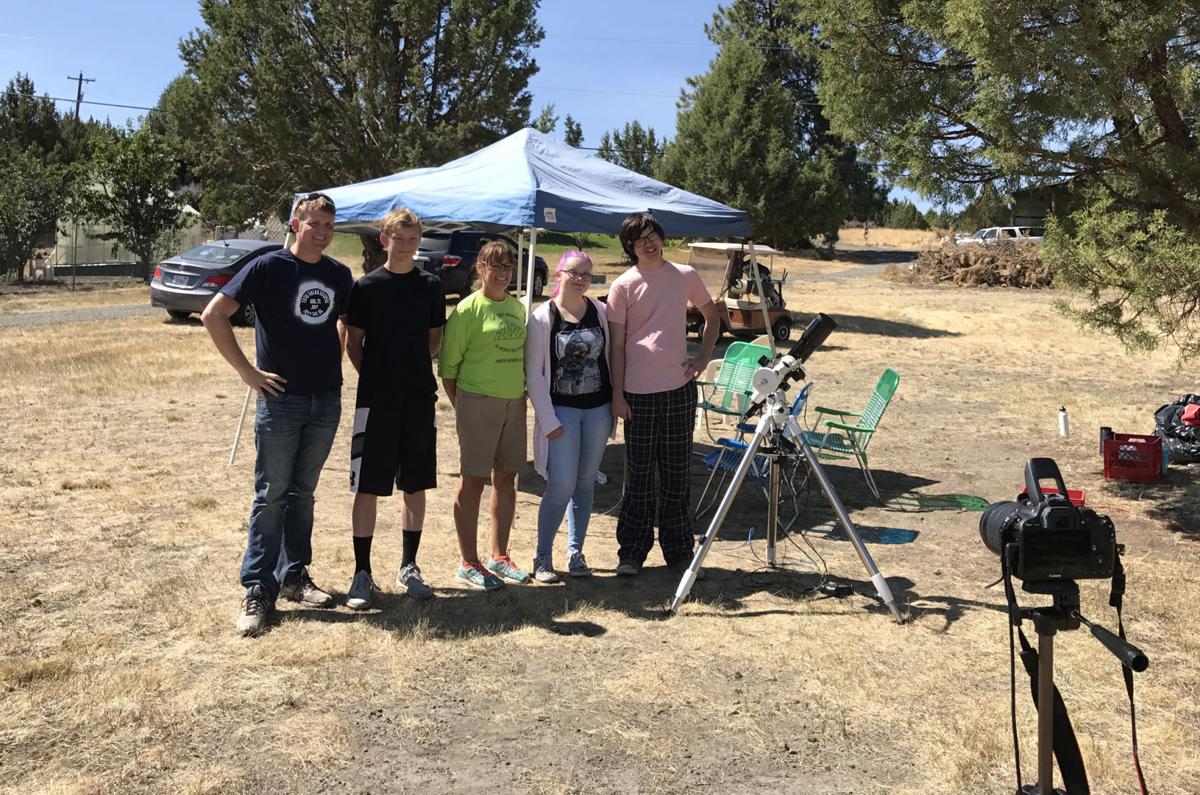 From right to left standing, Anthony Allen, Tom Schad from the National Solar Observatory and Gage Brandon on the day of the eclipse with Donavan Smith, left, and Declan Jensen, right, seated with the computers.

An image of the total solar eclipse taken by Sonna Smith and her students, along with help from astronomer Tom Schad, in 2017 in John Day.

While the eclipse in 2017 brought a spectacle for people in the path of totality, three Grant Union High School students and a teacher went beyond spectating and got published in a peer-reviewed science publication.

Grant Union seniors Donavan Smith and Gage Brandon were shocked that the experiment they conducted more than two years ago has come up again, and now they are published.

“Gage and I only found out that the work was published a week and a half ago, and it feels pretty good,” Donavan said.

The data and research were cited in the article, “Acceleration of Coronal Mass Ejection Plasma in the Low Corona as Measured by the Citizen CATE Experiment” and published in the Publications of the Astronomical Society of the Pacific.

Smith and Brandon were freshmen when they participated in the Citizen Continental-America Telescopic Eclipse experiment along with GUHS graduate Declan Jensen and her friend Anthony Allen, Rocklin, California, and science teacher Sonna Smith. The Citizen CATE experiment had 93 sites across the U.S. record the eclipse in its entirety.

The team spent 50 hours practicing for the moment of the eclipse so everything felt normal the day of the event, Brandon said.

The team collaborated with the National Solar Observatory for this project, Sonna Smith said. The data collected helped study the inner corona and coronal mass injections from the sun during the solar eclipse. The sun’s corona is difficult to study, according to the article the team was published in, but the eclipse gave a rare opportunity to capture footage for research.

Citizen CATE provided everything needed for the experiment to the team, Sonna Smith said. The equipment consisted of a telescope and filters, telescope mount and tracking drive, CMOS camera, hardware and software and a laptop.

The equipment is still on campus for staff and students to use. There was a glitch that affects the tracking system of the telescope, but the telescope is still usable.

Currently, Donavan Smith and Brandon are enrolled in an online college-level astronomy class through Brigham Young University, which is one of several opportunities that have arisen since the eclipse.

Being published in a science publication provided a benefit as well. Donavan Smith and Brandon plan to use this experience in future applications for work or college.

In the summer, Sonna Smith will have the opportunity to go to the solar observatory in Hawaii where Tom Schad, an astronomer from the National Solar Observatory that helped the team, is located to see all of the tools and equipment used there.

“For me, science is real life, and unfortunately, when you teach, you don’t always expose students to that portion of it, and they think it’s just memorizing things,” said Sonna Smith. “Did it (the experiment) go without any glitches? No. The first couple of times we tried to practice, and it was really rough, and they sent people over to help us out. Sometimes we do something, and it’s a complete failure as far as getting it right in the moment, but it doesn’t mean you fail. You build on it and do something else.”

Sonna Smith added it is important for students to jump at any opportunity available, even if it’s outside their comfort zone. She said, even if a student didn’t enjoy the experience, at least they would know that. Brandon concurred.

“I would like other people to know that the universe is a lot bigger than they think, and astronomy is something that many people can find themselves interested in and captivated by,” Donavon Smith said. “Take a look at astronomy, and you might find something cool.”