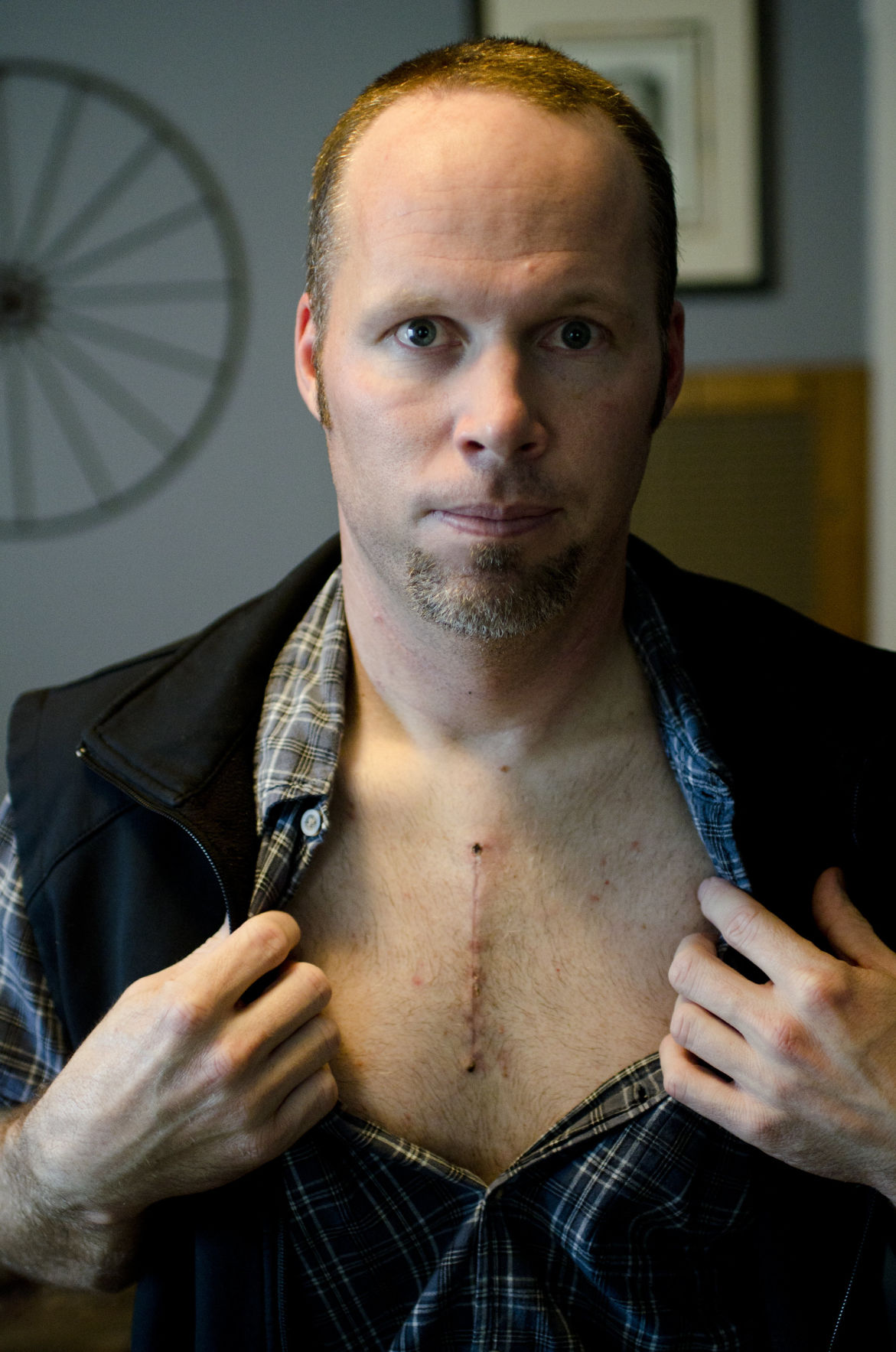 Kevin Walker, 38, shows a scar from his recent open heart surgery. A last-minute decision to receive a heart test Walker says he typically would have delayed saved his life. 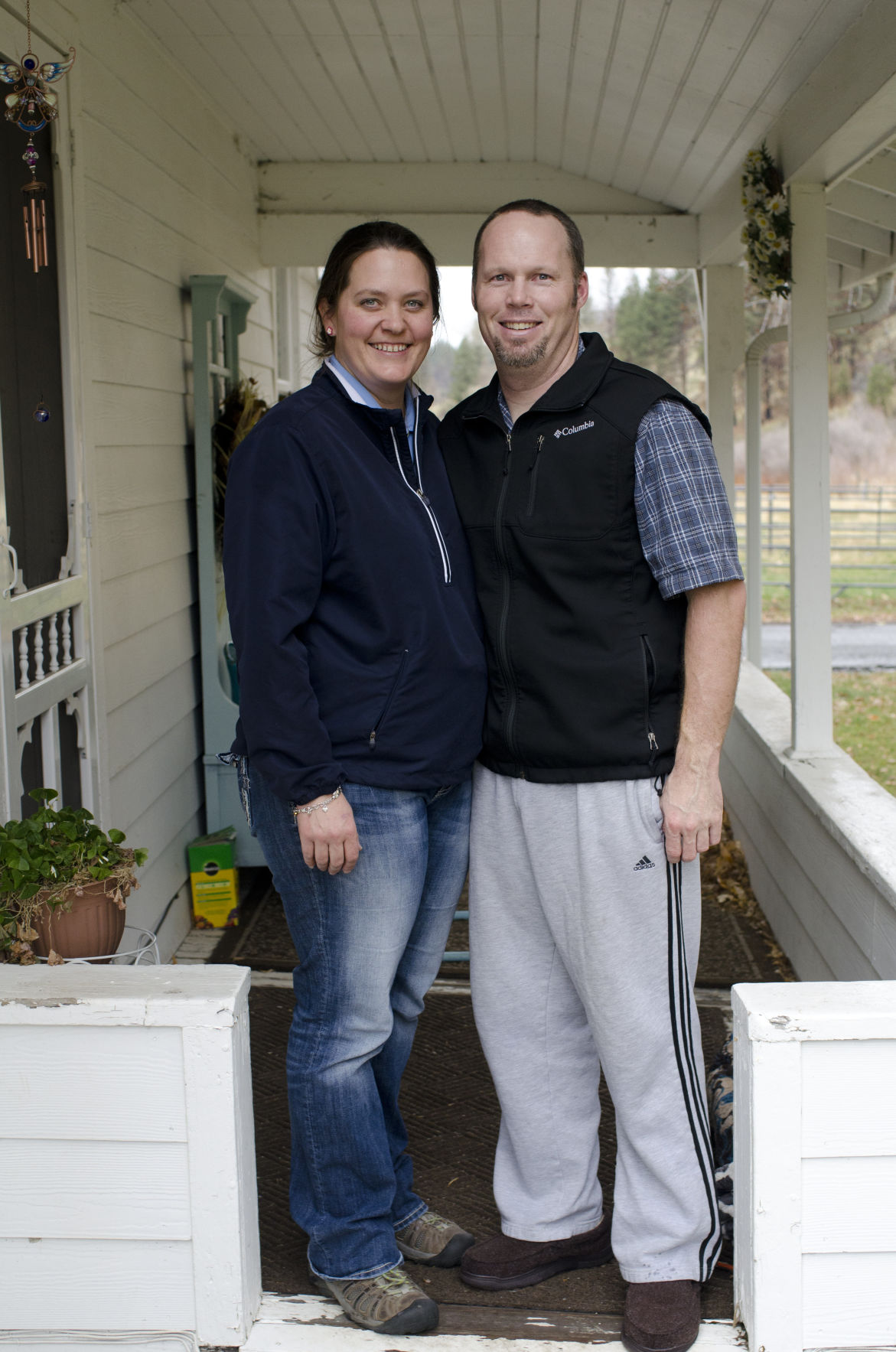 Kevin Walker, 38, shows a scar from his recent open heart surgery. A last-minute decision to receive a heart test Walker says he typically would have delayed saved his life.

Thirty-eight-year-old Kevin Walker is still getting used to the regular metallic ticks coming from his chest.

Kevin recently had emergency heart surgery to replace his aortic valve and remove an aneurysm on his aorta.

The valve, normally 4.5 centimeters in diameter, had shrunk to less than 1 centimeter, and the wall of his aorta had bulged out, forming an aneurysm. Both conditions were detected when he had an echocardiogram test as part of a physical for a job with UPS.

Kevin admitted he normally would have delayed getting the echocardiogram. It did not appear urgent that he receive the test, as he showed no symptoms of heart problems in the weeks leading up to his diagnosis and he had fought fires all summer for the Forest Service.

However, Dr. Bruce McLellan, a cardiologist in Bend, was in John Day for a regularly scheduled visit and agreed to perform the echocardiogram for Kevin. The test revealed the dire condition of Kevin’s heart, and within a week of receiving his results, Kevin was in Bend undergoing open heart surgery.

McLellan has been providing medical services to rural communities like John Day for 14 years to assist both patients and healthcare workers.

“We do it as a convenience for patients who can’t travel easily, particularly during the winter,” he said.

The visits help solidify relationships between the medical communities, he said. He typically travels with a small team of professionals and offers echo-tech services, such as the test Kevin received, every other visit.

Kevin underwent a more-than-five-hour surgery where his heart valve was replaced with a mechanical valve. Oftentimes a valve from a pig or cow is used, but because Kevin was so young, a mechanical valve was used because it wouldn’t need replacing. However, he will be on blood thinners the rest of his life.

To fix the aneurysm, they removed part of his aorta and replaced it with an artificial graft.

Dr. Matt Slater, the surgeon performing the operation, did not sugarcoat the danger of the procedure, Haley said. They were told multiple times that Kevin might not survive the surgery.

“I think we heard he could die at least three times in five minutes,” she said.

The procedure involved cutting open Kevin’s chest to repair the valve and the aorta. Before going under, Kevin said his goodbyes, just in case.

“I was scared,” he said, knowing his heart would literally be in the doctors’ hands.

The surgery was Kevin’s first, and he had never had never been under anesthesia before.

The recovery was painful, but the most severe danger had passed. After a week in the hospital, he was able to return home.

The Walkers were greeted by a wave of support that has carried them into the holiday season. Friends, family members and coworkers have all helped the family and facilitated Kevin’s recovery.

“The outpouring of support from so many members of our community has reconfirmed why this will be our forever home,” Haley wrote in an email.

Kevin will be unable to work until at least February, so his mother set up a GoFundMe account to help with medical and recovery expenses in the interim. So far, the page has raised $2,895 for the family.

Kevin is lucky to be alive, but it’s only by chance he received the echocardiogram that detected the heart problems. As fire season was wrapping up, Kevin was presented with the option to extend his employment to fight fire in Colorado for two weeks.

Instead, he chose to stay behind at the last minute and was able to receive the test that saved his life.

“I was right on the fence,” he said. “If I would have done that, I probably wouldn’t be here.”

Lori Harvey pleads not guilty to hit and run