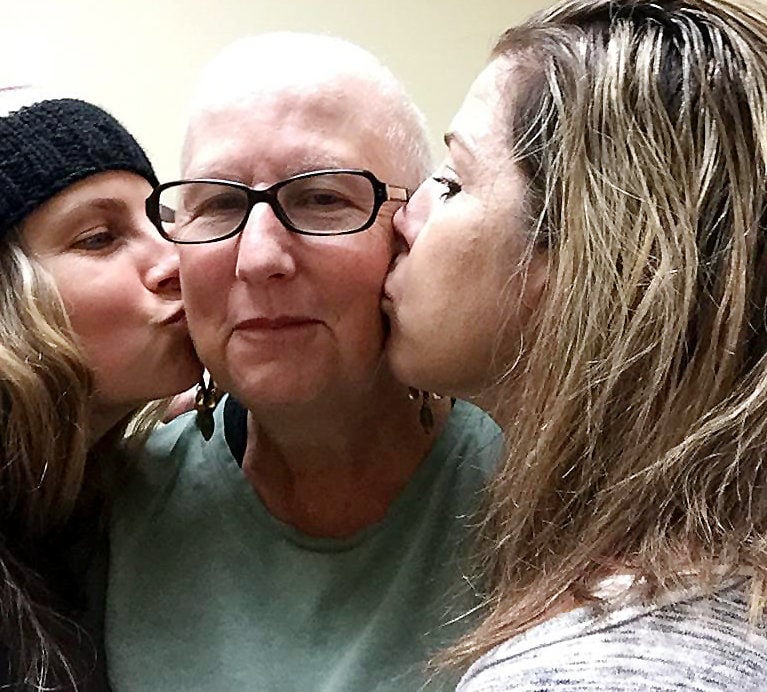 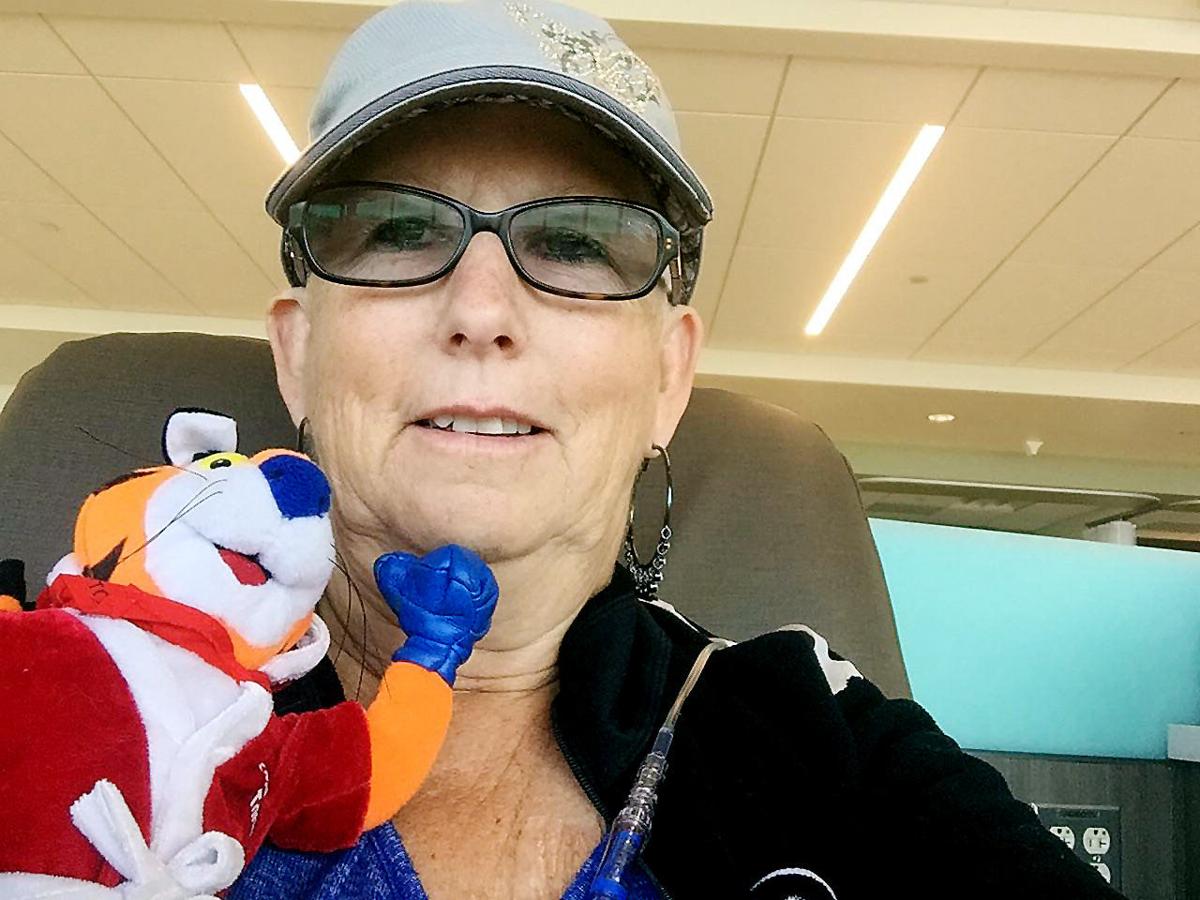 Mary Weaver of John Day is joined by “Tony the Tiger” during a recent chemotherapy treatment at OHSU Hospital in Portland. Weaver said she brings the stuffed animal, given to her by friend Melody Jackson, along for each of the appointments. 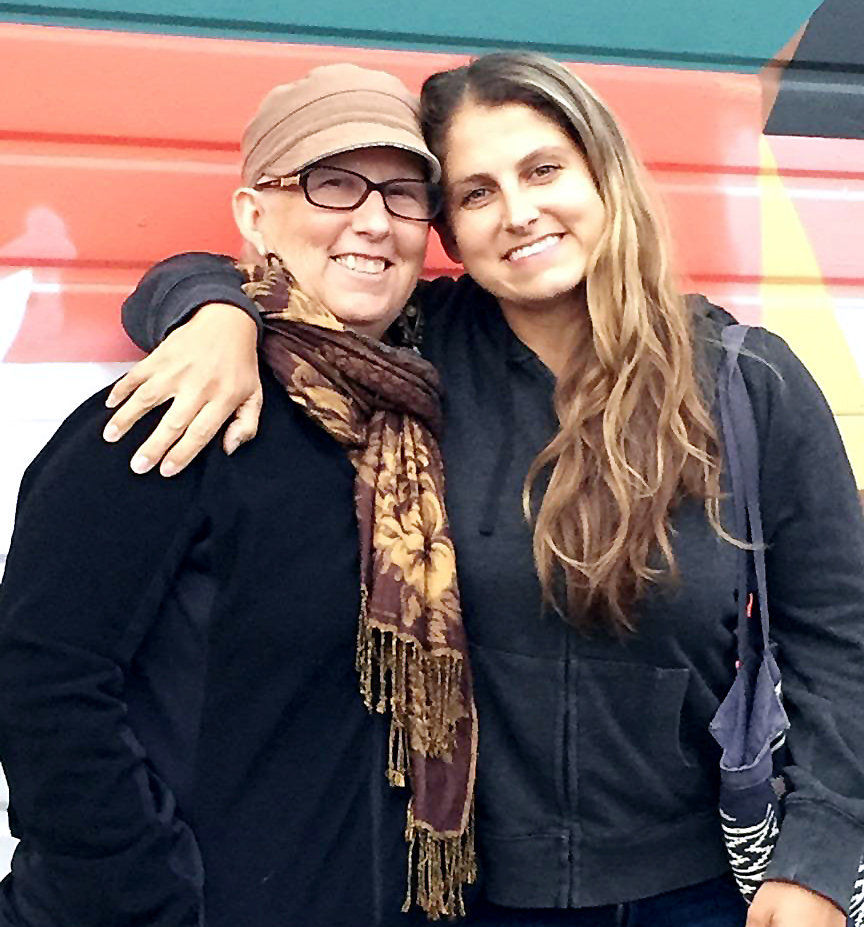 Mary Weaver with her daughter Mandy Weaver, who has been supporting her mom while she has chemotherapy treatments at OHSU Hospital in Portland. 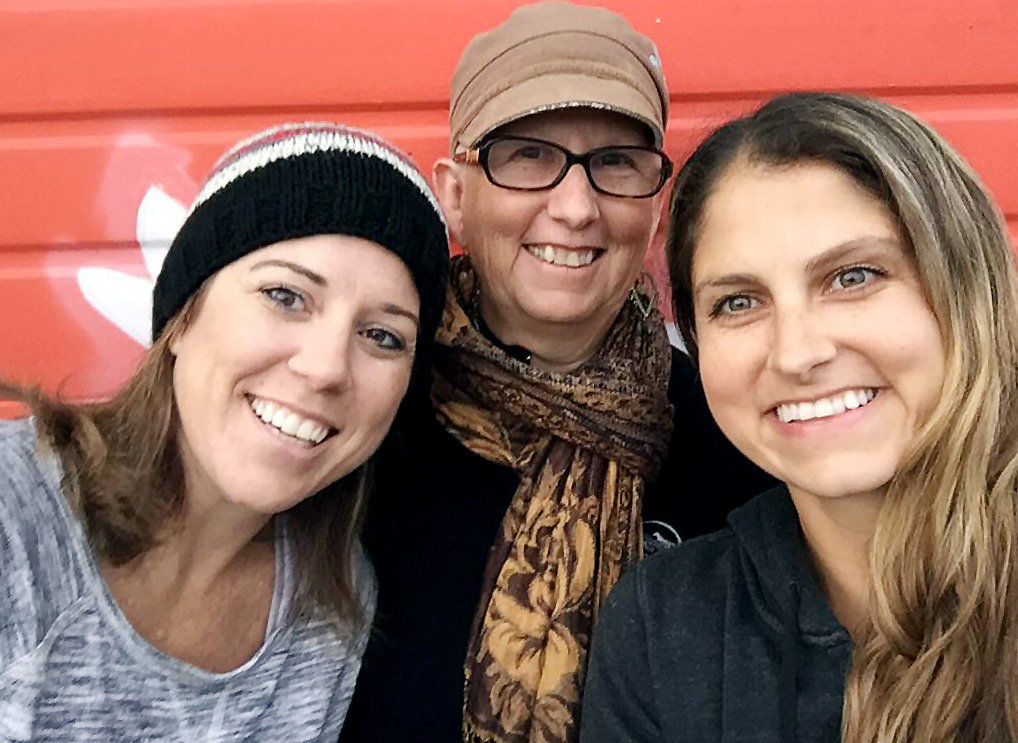 Mary Weaver is surrounded by her niece Jennifer Lawson, left, and daughter Mandy Weaver in this photo. 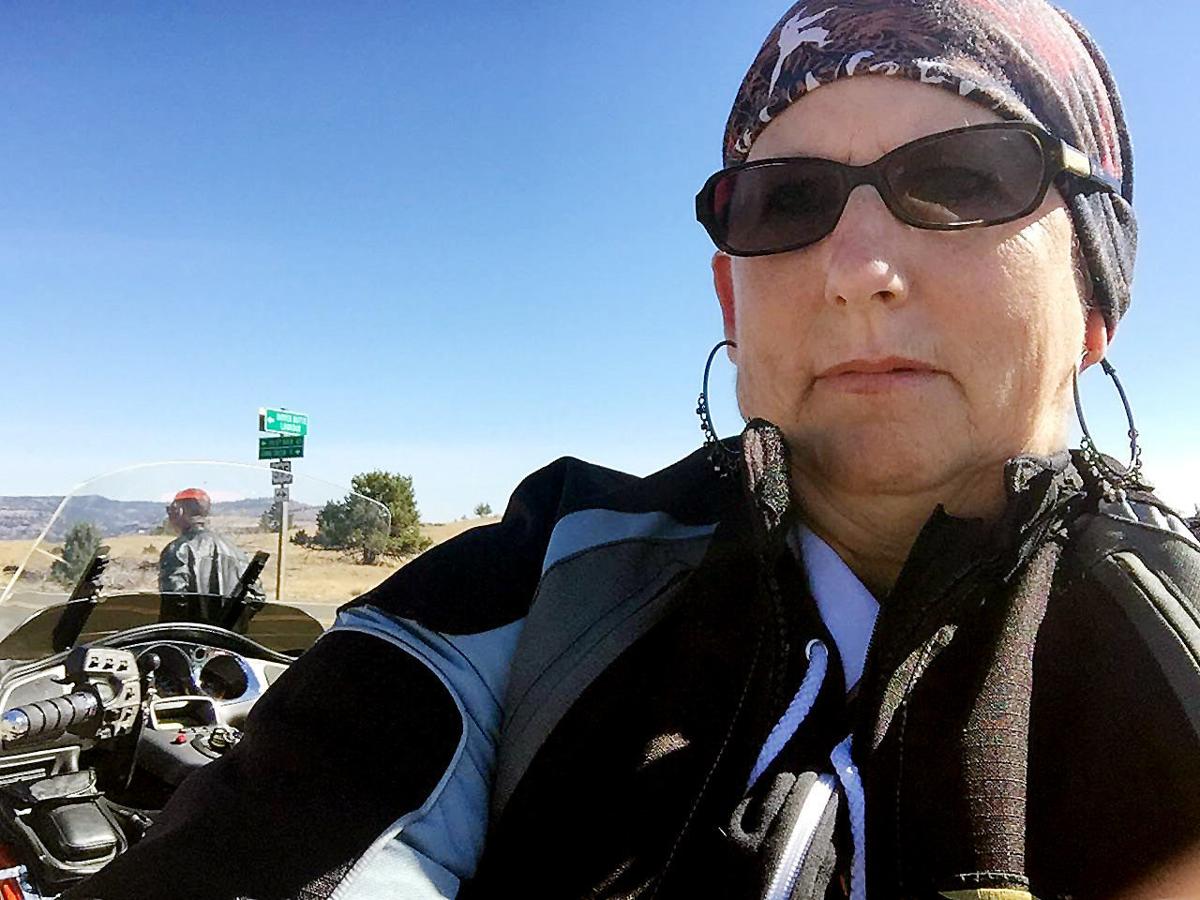 Contributed photoMary Weaver, above, is battling cancer for a second time, but that doesn't stop her from enjoying hobbies, such as riding motorcycle with her husband James.

Mary Weaver of John Day is joined by “Tony the Tiger” during a recent chemotherapy treatment at OHSU Hospital in Portland. Weaver said she brings the stuffed animal, given to her by friend Melody Jackson, along for each of the appointments.

Mary Weaver with her daughter Mandy Weaver, who has been supporting her mom while she has chemotherapy treatments at OHSU Hospital in Portland.

Mary Weaver is surrounded by her niece Jennifer Lawson, left, and daughter Mandy Weaver in this photo.

Contributed photoMary Weaver, above, is battling cancer for a second time, but that doesn't stop her from enjoying hobbies, such as riding motorcycle with her husband James.

Not much slows Mary Weaver down, but over the past three months she’s been fighting for her life — for a second time.

In weeks and months leading up to the Grant County Fair in John Day, Weaver can be seen jumping from task to task, juggling the duties that come with managing the fairgrounds. This year, diagnosed with stage four cancer, she missed the event she worked so hard to help prepare.

Her battle with cancer began three years ago. In 2013, she found a lump in her breast through self-screening. Breast cancer was officially diagnosed after an office screening, mammogram and biopsy.

From there, Weaver underwent a lumpectomy at St. Charles Medical Center in Bend, followed by radiation for 33 days straight at a Portland hospital.

In the following three years, Weaver was in remission and adopted a healthier lifestyle.

“My recovery had gone real well,” she said. “I tried better eating habits and exercise.”

With no sign of any health issues, Mary and her husband, James, ventured by motorcycle to Utah for some time off last July, a month before the Grant County Fair.

Their week-long vacation plans came to a sudden halt when Mary’s arm began swelling up.

“My hand looked like a club,” Mary said. “I hadn’t felt bad. My arm was nasty and hurt, but I thought I was overheated or dehydrated.”

She and her husband stayed in a motel and headed back to John Day the following day. A call to an oncologist led to a visit to the Blue Mountain Hospital emergency room.

“It was a blood clot,” Mary said. “They thought it was a problem with the cancer.”

She said a mammogram and blood test came back fine, but a CT scan taken at St. Charles showed some bad news — six spots of cancer on her liver, two on the lymph nodes and two on the ribs.

Mary said she’s had mammograms every six months since her first experience with cancer.

“Sometimes a mammogram isn’t enough,” she said. “If I hadn’t had the blood clot, I wouldn’t have known (the cancer had returned and spread). I thought I was doing great.”

She wonders if a CT scan earlier after her lumpectomy would have helped catch the cancer sooner.

“I think there should be more follow through, especially if a person has any past history of cancer,” she said.

She said her ER and follow-up visits were made better with a familiar face — Dr. Lincoln Mosier, a student doctor and John Day native who was on rural rotation at the hospital and Strawberry Community Clinic at the time, working with Dr. Emily Lieuallen, D.O. She said Mosier helped her feel more like a person and less like a number.

“Lincoln made a huge difference,” Mary said. “He followed up with phone calls, and he made me feel like a person.”

Now Mary is staying with her daughter and son-in-law, Mandy Weaver and Patrick David, in Portland, traveling to OHSU Hospital for chemotherapy treatments, and a second opinion.

For each treatment, Mary brings along a stuffed animal, Tony the Tiger, given to her as a gift from her friend Melody Jackson. The tiger is dressed with a boxing robe and gloves and is a reminder to keep fighting.

She said the worst symptoms from treatments hit two days afterward with shakiness and nausea.

“Anti-nausea medication is helpful, but you kind of hurt all over,” she said.

Small gestures of kindness help her get through the tough times, she added.

“Sometimes it’s a struggle to get up and get going,” Mary said. “With support of family and community with letters, notes and calls, you push yourself. Chemo once a week — it takes a lot out of you.”

She also tries to keep her mind busy by working remotely as fairgrounds manager.

“You’ve got to remember those days, too, when you’re having a bad one,” she said.

She has one more treatment left at OHSU, then will continue treatments at St. Charles, driving to Bend once a week from John Day.

A recent CT scan showed, so far, the treatments have not stopped the progression of the cancer that spread to her liver. Radiation will only be used as an extreme measure, she said, and surgery won’t fix the problem. Doctors have told her it’s not curable, but the spreading can be stopped.

“At this point, it’s at least a year process,” she said, adding doctors are trying to find the right chemotherapy for her types of cancer.

Mary said it is important for women to be comfortable talking with their doctors.

“I think a woman knows her body,” she said. “If there are changes — even if you doubt — you should speak up and find out. (Sometimes) you feel like you’re just a number. Talk to your doctors more and make them understand things.”

Through the difficulties, Mary said she’s not giving up.