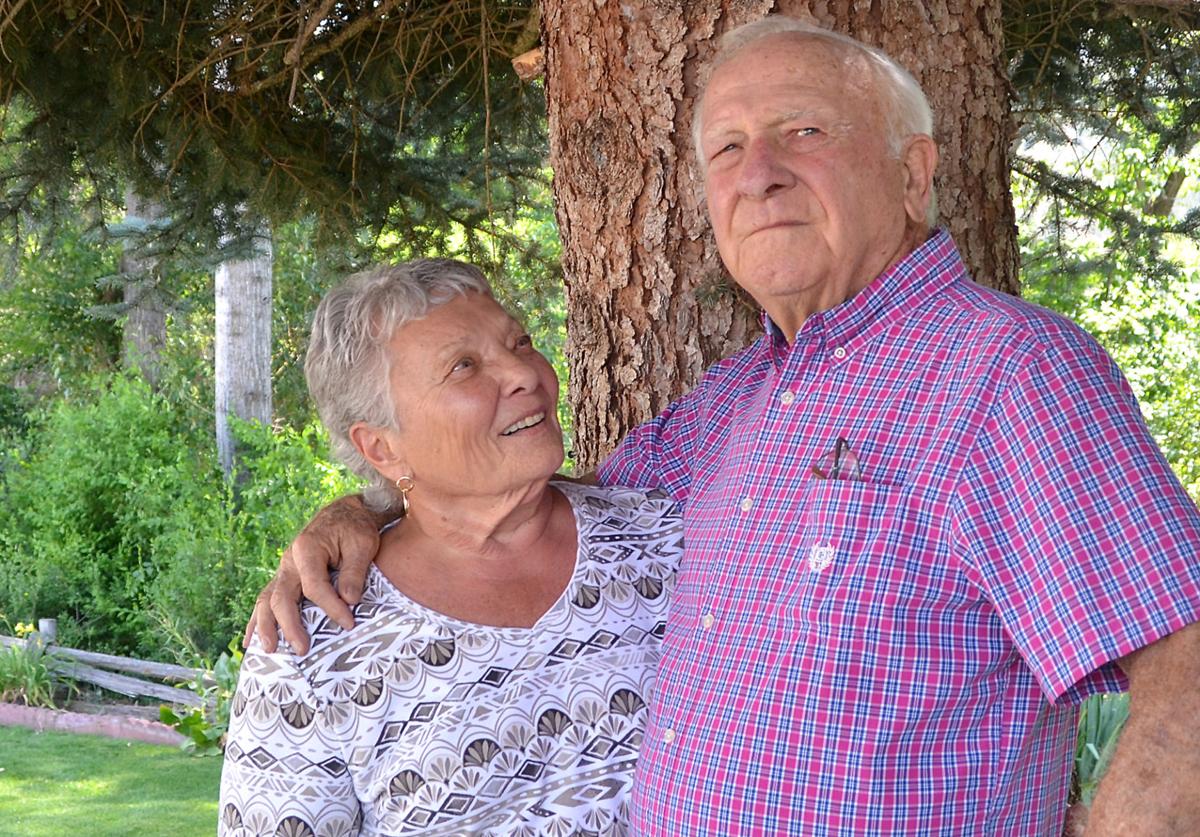 Joyce and Dean Nodine were the grand marshals of the 110th Grant County Fair. 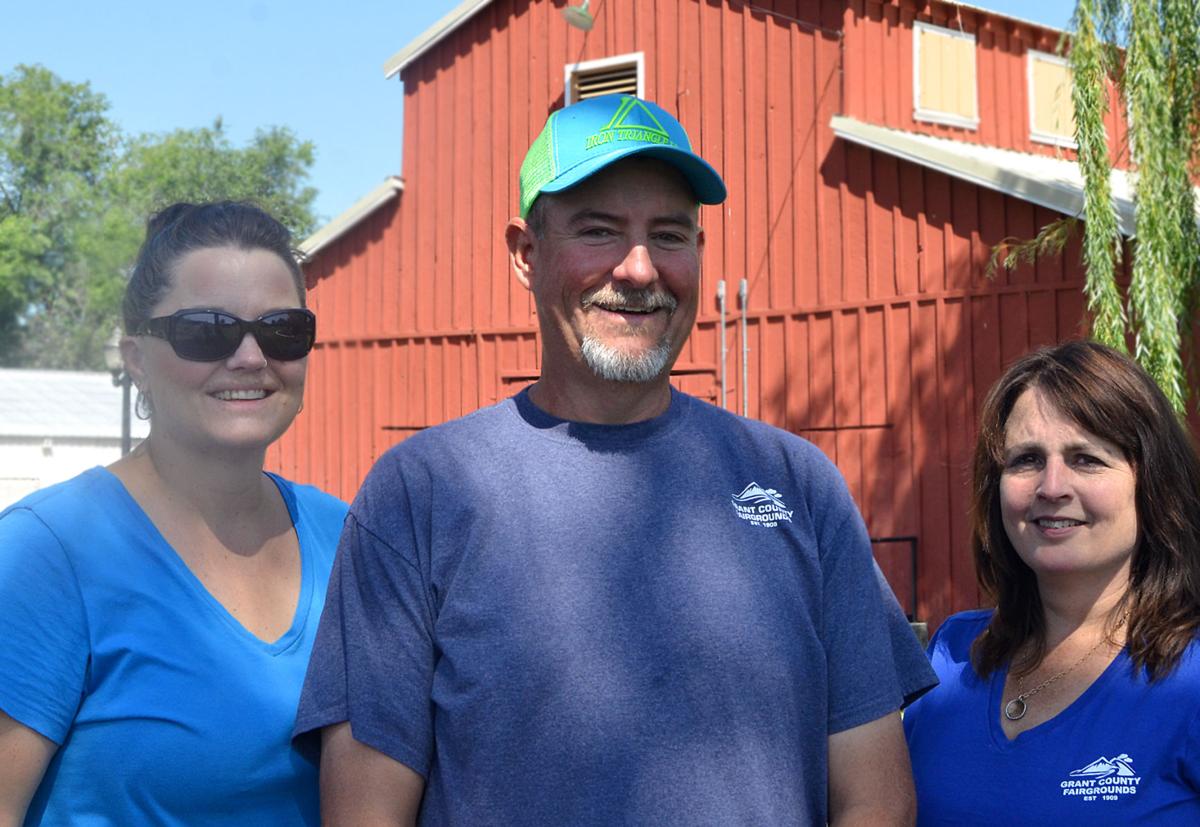 Joyce and Dean Nodine were the grand marshals of the 110th Grant County Fair.

This year’s 110th Grant County Fair, Wednesday-Saturday, Aug. 14-17, in John Day will be a special occasion for Dean and Joyce Nodine.

Not only have they been selected as this year’s grand marshals, they are also celebrating 60 years of marriage on Thursday.

Longtime Grant County residents, the Nodines have enjoyed a whirlwind of a life together, raising a family, working as educators and volunteering in the community.

During the week of the fair, the couple will be in their usual spot, serving up American Legion classics at the hamburger stand near the main entrance of the fairgrounds.

“It’s a lot of work, but you get to see a lot of people that you otherwise wouldn’t get to see,” Joyce said.

She said many hours are spent chopping up the onions, bell peppers and celery for the sautéed burger relish, but she stopped short of saying which spices are used in the special recipe.

Dean, who will be running the cash register there, said he’s looking forward to the fair.

“Over the years, it really has improved, and it is a good fair coming up,” he said. “I enjoy seeing old friends and meeting new people.”

The Nodines each grew up on farms in South Dakota. They both joined the Navy after graduation and later attended Dakota State University in Madison, where they earned bachelor’s degrees in education.

They moved to John Day in 1962, as both were hired to work at Grant School District with Dean as a vice principal and shop teacher and Joyce as a fourth-grade teacher.

Dean taught wood shop, mechanical drawing and leather craft. He later became principal of Grant Union and then was hired as superintendent of the school district.

“We were fortunate to have really good board members and blessed with a bunch of good teachers,” he said.

He oversaw the expansion of the school buildings as the student population was bursting at the seams. At one time during the mid-’60s, enrollment for the then freshman through senior high school grew to about 455 with 100 seniors in the graduating class.

One of Dean’s favorite parts of his job as superintendent was traveling to Izee and Seneca schools.

“I tried to visit every week to make sure they felt part of the system,” he said, adding that both he and Joyce enjoyed the Seneca School Christmas programs.

Over the years, Dean has offered up his skills volunteering for 4-H, the John Day Elks Lodge and the Grant County Shooting Sports club as well as various local boards and committees.

Both Dean and Joyce have also volunteered for the American Legion Post and Auxiliary.

“I always felt I was helping kids prepare for the future — that doesn’t stop,” she said. “I just like helping people, and I feel fortunate that I can do it.”

She added, “All you need is for someone to come up and say, ‘Thank you for giving of your time,’ and that just makes it all worthwhile.”

The Nodines plan to ride in the Grant County Fair Parade in an old-fashioned horse-drawn cart driven by Rusty Clark with their family members following, riding on a float.

The parade starts at 11 a.m. Saturday.

“Dusty’s been working his tail off, getting the grounds ready,” Winegar said. “We’re rarin’ to go.”

There is a lot to be excited about, from the livestock to the open class entries, as well as fair food and vendors.

The fun starts with free day at the fair on Wednesday.

This year’s big headliner is American country music band Parmalee, and lead singer Matt Thomas said they’re planning on bringing a high-energy and fun concert to the stage Friday evening with hits, including “Carolina” and “Be Alright” and many more. Britnee Kellogg of Portland, an American Idol contestant from seasons 11 and 12, will open for Parmalee at 7 p.m., and gates to the arena open at 6 p.m. For tickets visit eventbrite.com.

Other entertainment at the fair, free with admission, include the Blue Mountain Old Time Fiddlers, trick roper Karen Quest and magician and comedy hypnotist Nick Toombs. Other big draws are the youth livestock auction and freestyle bullfighting with Hamsher Fighting Bulls on Saturday evening, free with fair admission. Following the bullfights, country music singer Jessie Leigh will perform at the main stage, located on the fairgrounds field near the rides.

Funtime Carnival informed Winegar the week of the fair that they would not be able to bring their attractions. Winegar said alternative activities are being planned. Cash refunds will be given at the fair office to people who have already purchased carnival passes.

• 10 a.m.: Kids Day Parade, meet on Southwest First Street near the Catholic Church (from there, kids walk north on Canyon Boulevard to Dayton Street, then Main Street to Dairy Queen)

• 8 p.m.: Freestyle Bullfighting, free at the arena with fair admission

For more information, pick up a fair book at the fair office at 411 NW Bridge St.

'I used up my Marvel card!': Scott Adkins wishes he could return for the Doctor Strange sequel