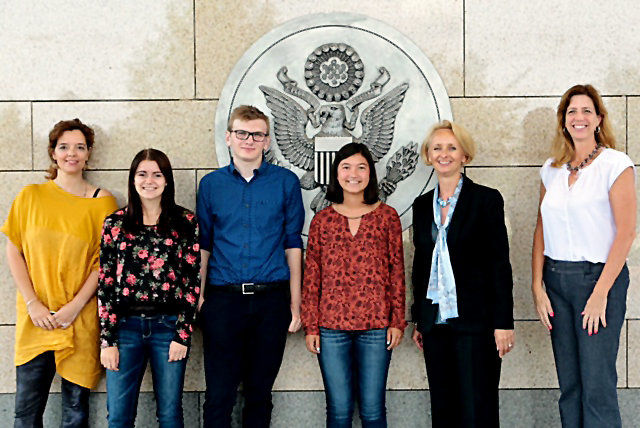 Sophia Pettit and others visit the U.S. Embassy in Sofia, Bulgaria. Pettit is in Bulgaria attending school through a Kennedy-Lugar YES Abroad Scholarship, awarded to her by the U.S. State Department. 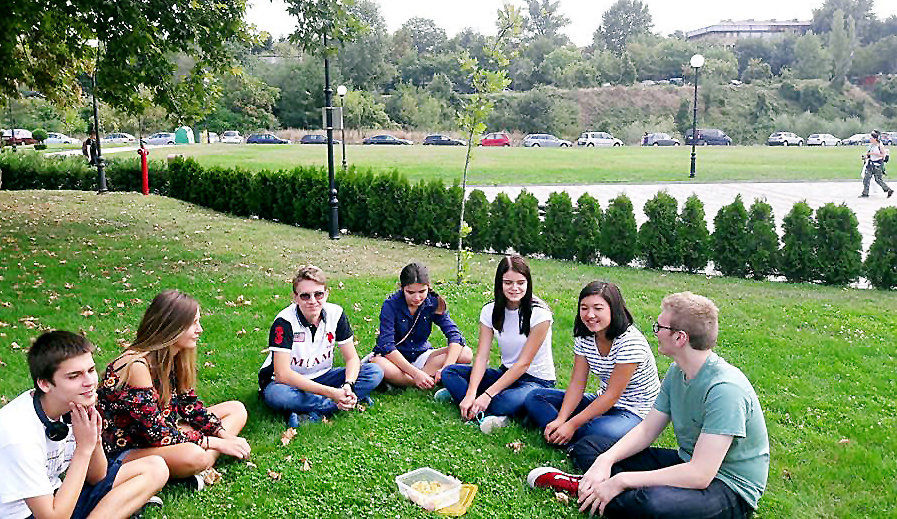 Sophia Pettit of Monument, third from right, sits with other students who are studying abroad this year in Sofia, Bulgaria.

Sophia Pettit and others visit the U.S. Embassy in Sofia, Bulgaria. Pettit is in Bulgaria attending school through a Kennedy-Lugar YES Abroad Scholarship, awarded to her by the U.S. State Department.

Sophia Pettit of Monument, third from right, sits with other students who are studying abroad this year in Sofia, Bulgaria.

Monument School sophomore Sophia Pettit is stepping into a new cultural experience through a study abroad program to Sofia, Bulgaria.

For the next several months, Pettit will immerse herself in a new country and new language — Bulgarian — through the Kennedy-Lugar YES Abroad Scholarship awarded to her by the U.S. State Department.

Each year, over 600 applicants, ages 15-18, vie for one of the 64 scholarships. Pettit was informed in April of this year that she was selected for the program.

“I heard about the program through my dad,” she said. “I’ve always wanted to do a foreign exchange since junior high.”

Pettit is the daughter of Earl and Nittaya Pettit.

According to the YES Abroad website, the program started in an effort to increase cultural understanding between Americans and people from other countries, especially those with large Muslim populations. Thirteen countries take part in the program, including Indonesia, Ghana, Thailand, Bosnia and others.

Pettit said earning good grades and being involved in school programs gave her application a boost.

“You’re going as an ambassador of the U.S.,” she said, noting it helps to be involved in activities which show leadership and independence.

Pettit started a blog called “Sophia Goes to Sofia” with entries about her experiences in Bulgaria.

Her host family was waiting for her when she arrived in Sofia.

She wrote, “My host sister, Eli, was holding a rose, and Bobo, my host brother, was holding some sort of round loaf of bread with a jar of spices.”

She said it is traditional for visitors to Bulgaria to eat the bread, dipping it in the spices.

She said she’s learned to read and write in Bulgarian as well as greet and ask directions.

The hardest part about the language, she said, is that some letters look like English letters, but are pronounced differently.

“It gets pretty complicated, but my Bulgarian is coming along,” she said.

Her first day of high school at the American College of Sofia went well.

“To my surprise, I really enjoyed it!” she said. “The system here is nice and the campus of my school is absolutely beautiful.”

Her classes, which are taught in English, include: math, sports, English, physics, ethics and law, Spanish, history, U.S. history, geography, biology and informatics.

“Your schedule is different each day,” she said. “For example, Monday I’ll have math for two class periods in a row, sports international for one class period, and English for two in a row. The next day, I’d have totally different classes.”

Pettit discovered her U.S. history teacher is from Hermiston.

She hopes to join volleyball and basketball teams when they’re available, as well as some clubs.

“Luckily, I survived my first couple days ... without too many crazy mishaps,” she said.

She took the wrong bus stop traveling to school and was placed in Spanish II instead of Spanish I.

“I eventually found my way to school — without being late I may add — and my schedule got fixed,” she said. “Here goes my sophomore year of high school at a new school!”

Kelly Rowland enjoying 'every moment' of her pregnancy