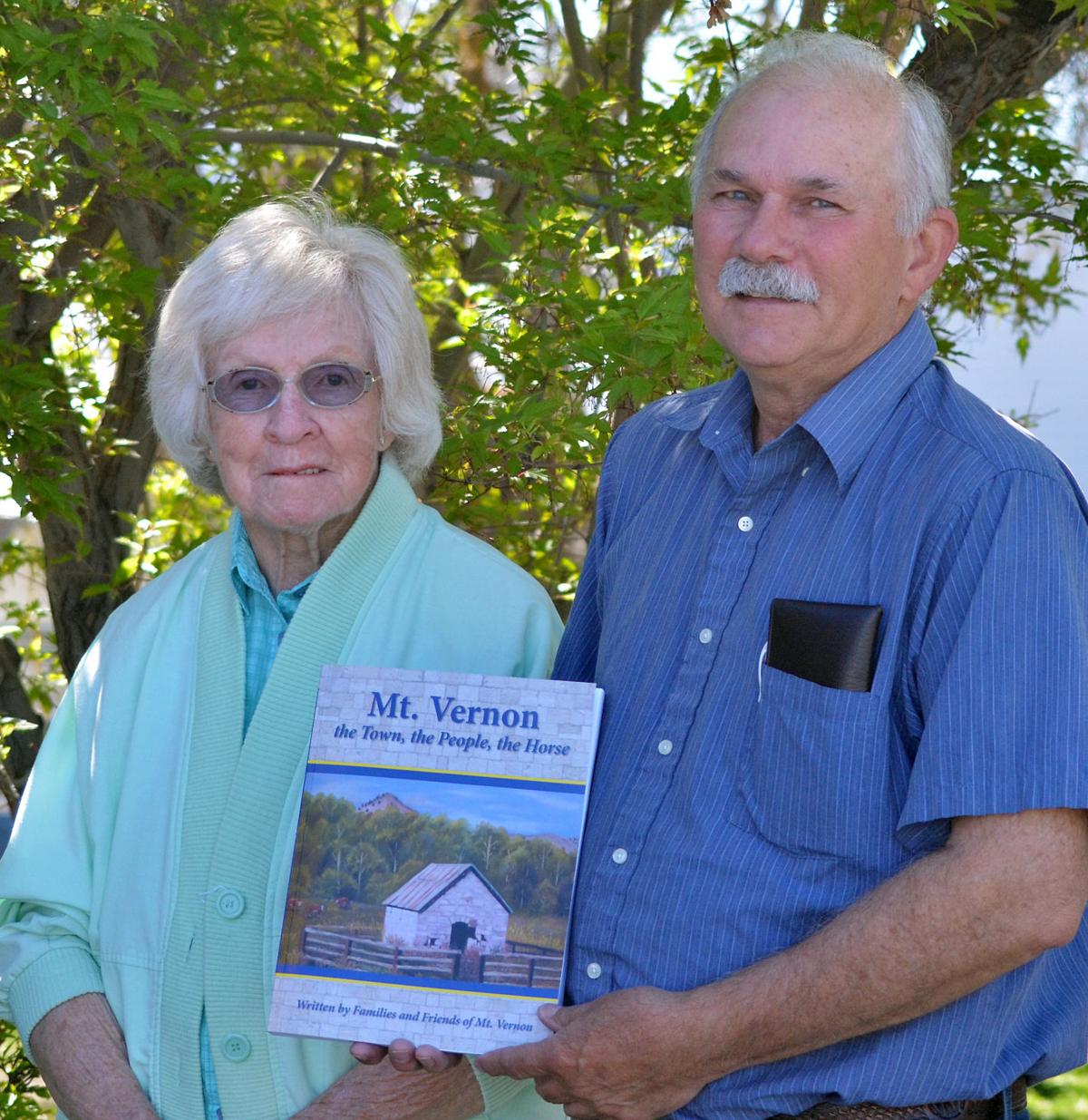 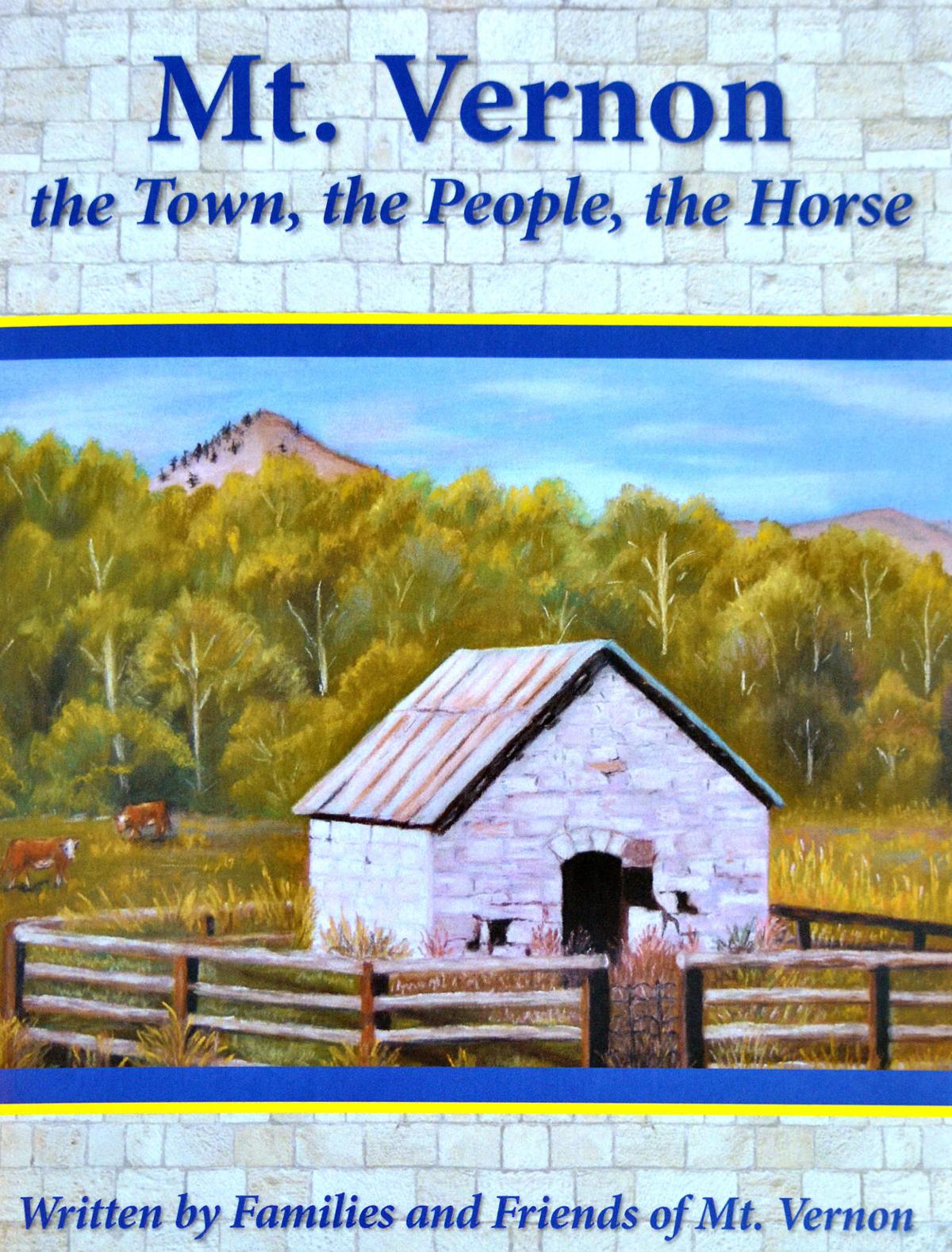 The book “Mt. Vernon: the Town, the People, the Horse” recounts the town's history. 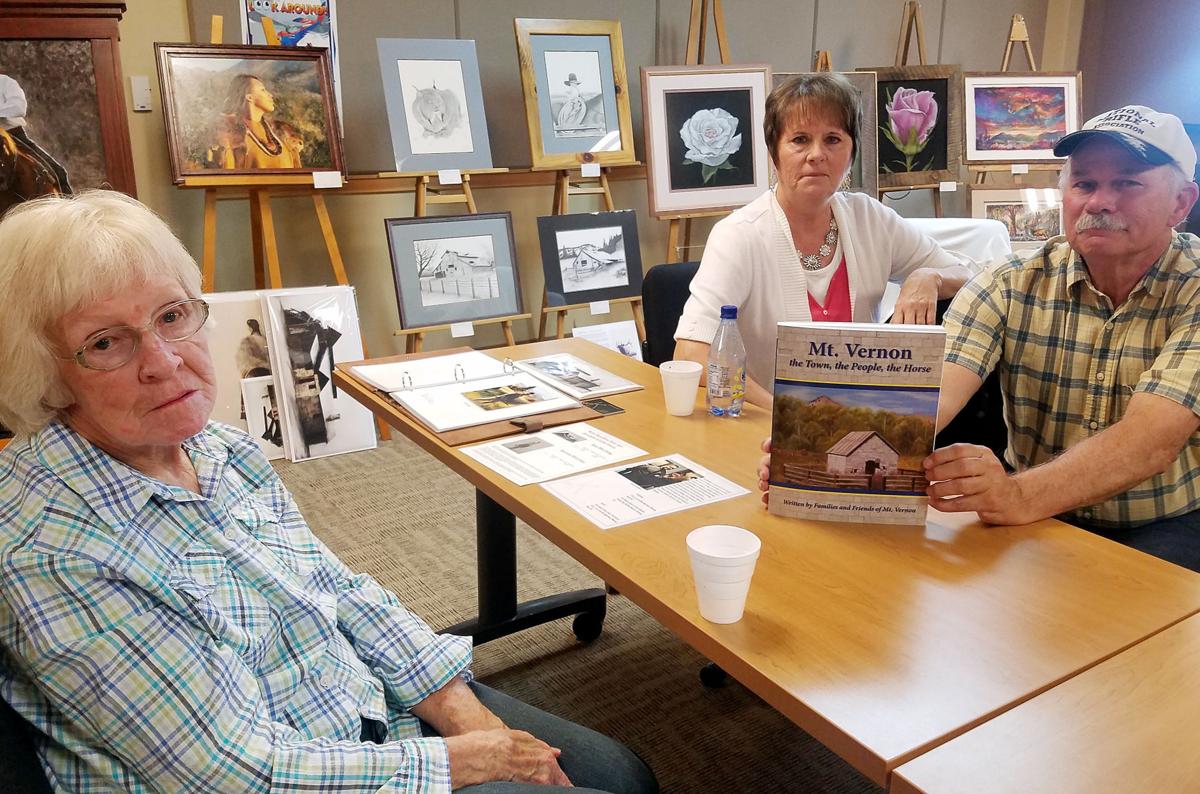 Authors Mary Ellen Brooks, far left, and Lyle Williams have compiled a book of Mt. Vernon's history. Also sitting with Williams is his wife Doris. They had the book for sale at the Grant County Art Show.

The book “Mt. Vernon: the Town, the People, the Horse” recounts the town's history.

Authors Mary Ellen Brooks, far left, and Lyle Williams have compiled a book of Mt. Vernon's history. Also sitting with Williams is his wife Doris. They had the book for sale at the Grant County Art Show.

Did you know the town of Mt. Vernon was likely named after a racehorse, and it once thrived with several businesses, including sawmills?

Lifelong Mt. Vernon residents and family friends Mary Ellen Brooks and Lyle Williams remember many of Mt. Vernon’s good old days and worked together, along with other longtime residents, to compile a book of the town’s history.

The book is called “Mt. Vernon: the Town, the People, the Horse.”

Inside its pages, readers will learn how the town started, as well as information on the pioneer families, the schools and the businesses.

The cover of the book features Brooks’ painting of the stone stable that housed the legendary race horse, Mt. Vernon, to protect him from would-be thieves and ne’er-do-wells.

The stable, which still stands across Highway 26 from Clyde Holliday State Park, was built specifically for Mt. Vernon the horse, for which the town was named.

Williams said there are two other possibilities for how the town was named.

“The most famous is being named after the horse, so that’s the one I go by,” he said.

He said over the years bits of Mt. Vernon history have been published here and there.

“We thought we would just fill in the blanks,” he said.

Brooks said she and Williams reached out to descendants of area homesteaders and found information for the book through the library and internet, digging up stories and photographs.

Brooks and Williams had help from Dale Morris, Millie Belshaw, Wilma Bauer, Darlene Muzzy and others, and research was also conducted at the Grant County Courthouse and Grant County Historical Museum in Canyon City.

“I like history,” Brooks said. “When my generation is gone, the history dies because young people don’t know, until you write it. My inspiration behind writing the book was to get the history out and to make money for the Mt. Vernon Alumni Scholarship Committee.”

The scholarship, administered through Grant School District No. 3., is awarded to a Grant Union senior who lives within the Mt. Vernon boundaries.

Both Brooks and Williams made new discoveries about Mt. Vernon along the way.

“I learned how many families and homesteads there were in the area, and how many businesses they had until the 1950s,” Brooks said. “At one point it was a pretty booming town — now it’s almost a ghost town.

She said her first relative to settle in the area was her great-grandfather, Martin Lucas, who retired from the Civil War.

“He had sheep and was more of a carpenter,” she said, adding he helped build the Episcopal Church in Canyon City.

Williams said his father’s descendants came to the area in 1908, and through his research he’s found relatives he didn’t know he had.

One of the many stories included in the book is about Mt. Vernon’s first school, which was organized in 1873 and built on Ingle Street.

“They didn’t go to school many months out of the year in those days,” Brooks said.

Back then, a fort was constructed around the school, and, at times, the women and children gathered there “to protect them from the Indians in the 1870s,” she said, adding it was back in the days when there weren’t many people around.

In 1915, there were about 60 residents, but Mt. Vernon wasn’t officially incorporated until 1948.

The current population is 525.

Brooks and Williams both agreed that Mt. Vernon’s school, which closed in 2012, was the heartbeat of the town.

“We had a pretty good school,” Williams said.

“School was the best part of Mt. Vernon in those days,” Brooks said. “I’m getting old, and I’m old-fashioned, but life was different then. ... I like that we still have a town, but I wish it would turn around and be like it was in the ’50s and ’60s.”

Brooks said the book can be purchased at John Day True Value Hardware, OK Garage in Long Creek and the Genealogical Society in John Day or by contacting Brooks at 541-932-4540 or Williams at 541-932-4721.

Published by Eloise Boren of ER Printing and Graphics in Dayville, the 320-page book is available for $40 a copy.

“I’m glad we have it done, and I just hope everybody enjoys it and appreciates the work we put into it,” Brooks said. “It was a learning experience, but it was fun.”

Marion Cotillard wants to 'protect' the planet with Greenpeace expedition