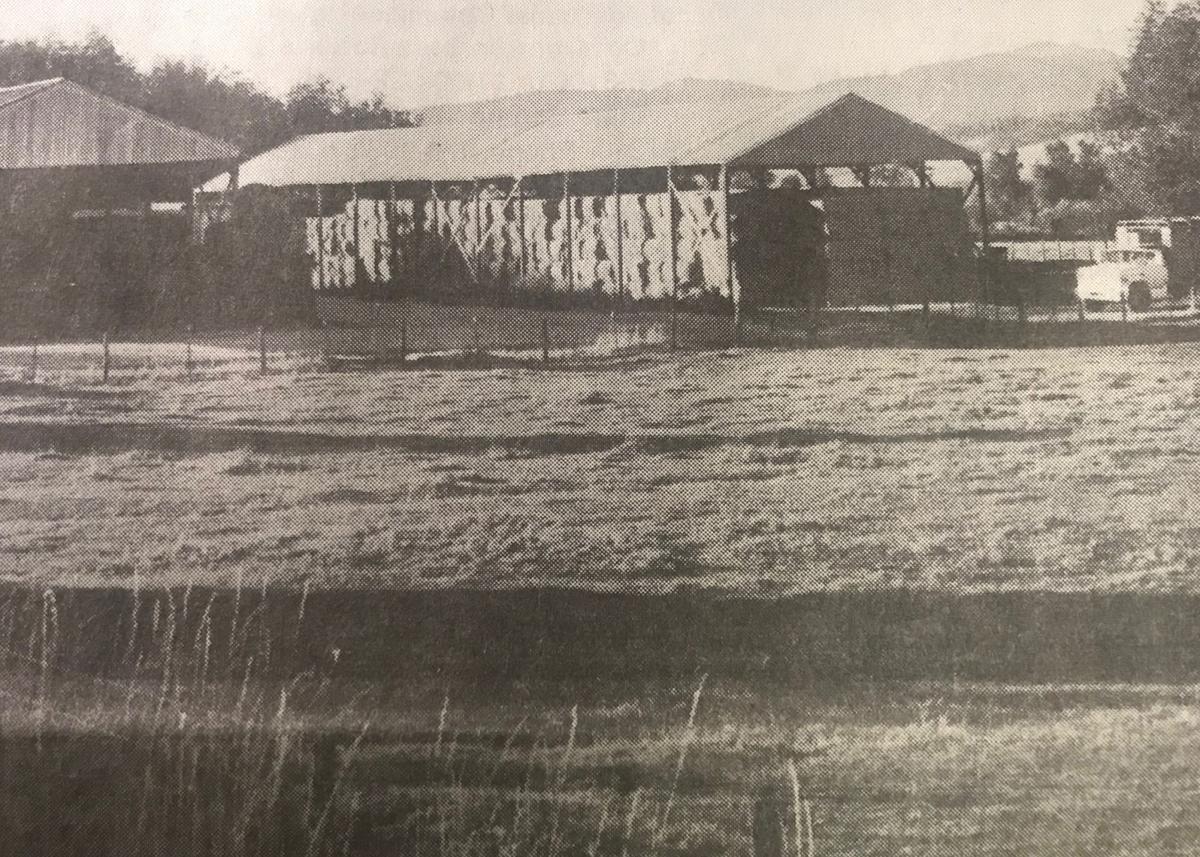 Moving toward the changing season, hay at this ranch east of Prairie City is safely stored under cover. Good weather coupled with favorable growing conditions produced good quality crops of hay this season. 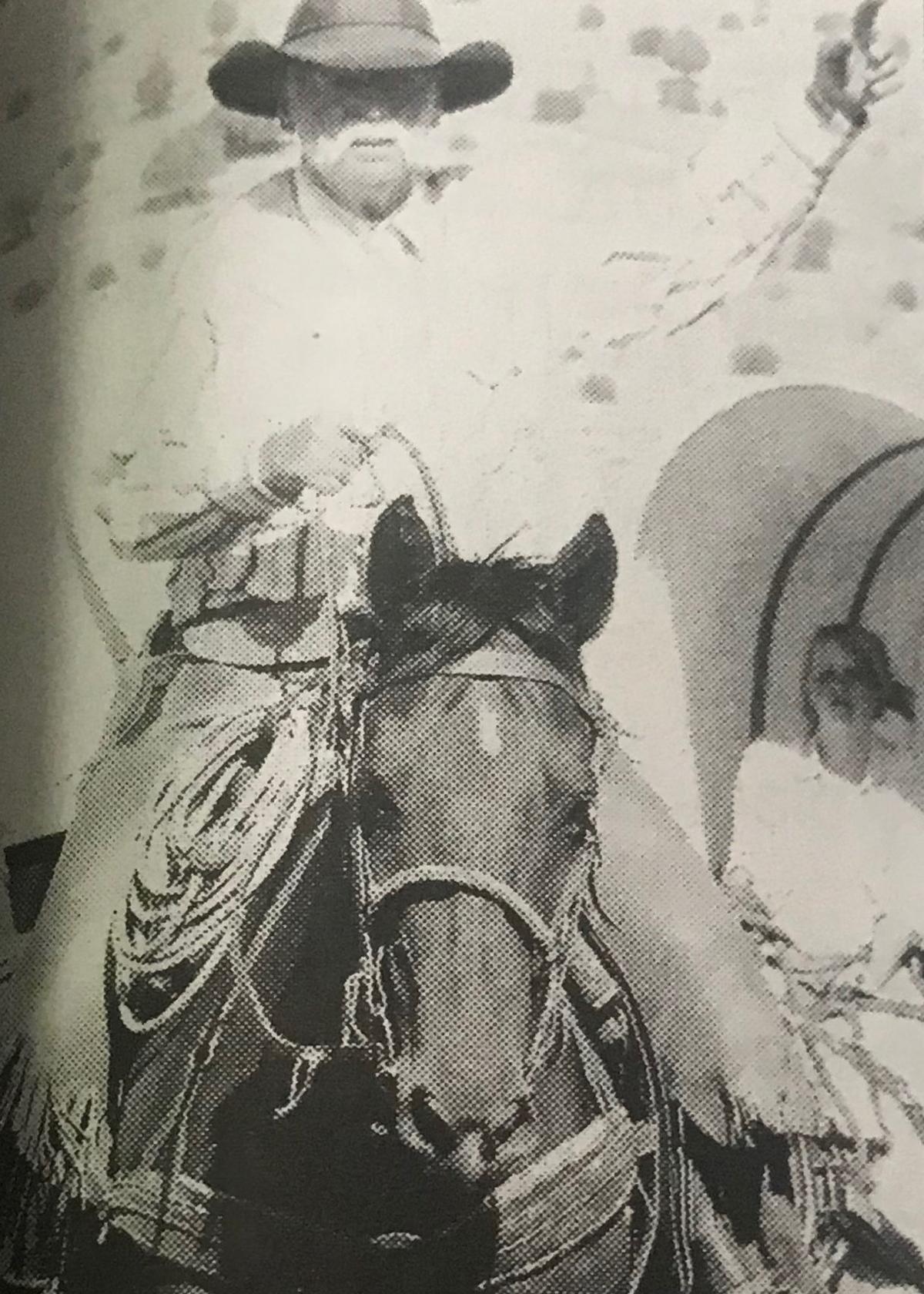 Kelly Collins is shown along the trail, before near disaster struck.

Moving toward the changing season, hay at this ranch east of Prairie City is safely stored under cover. Good weather coupled with favorable growing conditions produced good quality crops of hay this season.

Kelly Collins is shown along the trail, before near disaster struck.

When Germany capitulates and the final victory over the Hitlerized countries is won by the United Nations, the people of Prairie City will be prepared and ready for the fitting observance of “V-Day,” according to Stan Thomas, who announced this week that the Prairie Chamber of Commerce has formulated extensive plans in this respect and, in carrying out these plans will have the assistance and co-operation of the Junior Women’s Civic club.

The churches of the city will be open all day for special services and prayers, and the people of the community will gather together for a potluck dinner, this to be picnic style and held in the city park, weather permitting. During the evening there will be dancing in the Grange hall.

This is one event, for which the date cannot be announced in advance, but it is sure to come and, when the great day arrives, Prairie City is ready.

The Grant County Blue Mountain Eagle has been designated a “National Blue Ribbon Newspaper” for 1969-70 by the National Editorial Foundation, an arm of the National Newspaper Association.

In announcing the designation, Foundation President George Wortley III, Fayetteville, New York, noted that the Blue Mountain Eagle was one of the first newspapers to submit itself for this evaluation. Twenty-five criteria measuring the newspaper’s service to its community against a national standard were employed in the judging.

The Foundation, established in 1956, is dedicated to the improvement of journalism and journalism education.

A Canyon City resident reacted quickly in preventing what could have been a serious crash as the Oregon Statehood Wagon Train neared Prairie City Monday morning, Aug. 17.

The wagon train, journeying from Huntington to The Dalles for Oregon’s 150th birthday, was about five miles out of Prairie City, when two horses pulling a stagecoach broke away and sped off with it and two passengers on a downhill stretch.

Kelly Collins, who was riding as “point man” for the wagon train, went into action and galloped ahead to try to stop the stagecoach.

Collins said he knew that the horses, with blinders on, couldn’t see him easily and he would have to get in front of them.

He finally pulled ahead along the left side and “one I got their attention they slowed right down,” he said.

Collins’ guess is that the horses recognized familiar territory and “thought they were going home.”

They were also headed toward a bridge with cement barriers.

The driver of the stagecoach, Prairie City’s Del Raymond, had gotten off to fix a bit on one of the horses, when they bolted. The rest of the wagon train had pulled over to wait.

The wagon train was headed to an overnight stop at Howdy Town outside of Prairie City.

Collins estimated the horses and stagecoach traveled about a quarter-mile going about 35 mph.

“They were hauling mail,” he said.

Some wagon train riders also related accounts of the incident.

Outrider Cynthia Palmquist of Wisconsin, and Sharon McNamara of Maryland, who was riding in a covered wagon, were with the rest of the wagon train waiting back on the trail.

Palmquist and McNamara said they didn’t have a clear view of the situation, due to the downhill slope, but could hear what was going on well enough.

The ladies reported hearing voices yelling out, “Runaway, runaway!” and “They’re not gonna make it!”

Palmquist added that the stagecoach, horses and passengers could have easily tumbles over Collins and his horse at any point.

Everyone could have easily been killed, they agreed.

“He won’t admit it, but that man’s a hero,” Palmquist said.

Collins himself said he was a bit more reluctant, at first, to claim that status.

“It was something that needed to be done,” he said. “I couldn’t live with myself if I didn’t try to do something.”

But after allowing the impact to sink in for a few days, Collins admitted, “It’s nice to be called a hero.”