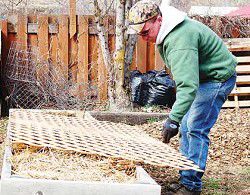 <I>The Eagle/Cheryl Jessup</I><BR>Volunteer Jody Smith fixes fences at the Garden of Eat'n, in a continuing effort to keep hungry deer and other critters from enjoying the fruits of the community harvest. 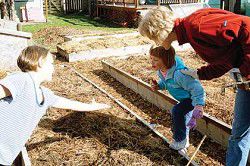 Seeds and worms provided plenty of fun and thrills for kids who came out to the Garden of Eat'n. Rhea Mead and her mother Jan share the excitement over an earthworm found by Debbie White at the Garden of Eat'n, Saturday, March 15.<I><BR>The Eagle/Cheryl Jessup</I>

<I>The Eagle/Cheryl Jessup</I><BR>Volunteer Jody Smith fixes fences at the Garden of Eat'n, in a continuing effort to keep hungry deer and other critters from enjoying the fruits of the community harvest.

Seeds and worms provided plenty of fun and thrills for kids who came out to the Garden of Eat'n. Rhea Mead and her mother Jan share the excitement over an earthworm found by Debbie White at the Garden of Eat'n, Saturday, March 15.<I><BR>The Eagle/Cheryl Jessup</I>

JOHN DAY - Gray clouds and a few snowflakes didn't deter some folks with from coming out on a recent Saturday to break ground at the Garden of Eat'n at Families First.

Kids and adults with "planting fever" teamed up to prepare the raised beds, claim planting areas, and sort through seed packets. Local 4-H members got a head start in one bed a few weeks earlier.

Debbie White, 10, from the Her-os and He-ros club, and her mentor Kim Brown were among the first to arrive. One of the first tasks they took on was to clear away the hay mulch that covered the beds through winter. To Debbie's delight, several centipedes and earthworms soon came wiggling up.

Another member of the mentoring club, John Thomas, 9, soon showed up. He enjoyed collecting leftover onion and carrot "treasures," unearthed from last season. Also stopping by were Jan Mead and her daughter Rhea, eager to claim some gardening space and start planting fresh vegetables. Nancy Nickel, who runs Her-os and He-ros, had prepared a hearty soup inside for anyone working up an appetite.

Jody Smith was on hand to fix some fences to try to keep the deer out in the growing season ahead. Smith, who works for the U.S. Forest Service, volunteers his time at Families First, doing general yardwork and other repairs around the property. He says he enjoys "helping out wherever needed."

The garden's greenhouse also got a makeover of sorts recently, thanks to Jim Lemcke from the TEC office in Canyon City, and his team of helpers, Ethan Thomas, Riley Pettyjohn, Drew Mechem, Bret Lauer, Brad Arnett and Nick Gibson. The "work crew" replaced the plastic "walls" with a more durable covering, and have plans for more improvements on the greenhouse later.

Randi Movich, a family support specialist for Families First, heads up the garden. Movich says that the garden, created in 2003 by the Her-os and He-ros club, has always been community-supported. She says that anyone is welcome to make use of the garden; all that is asked is that any extra food be shared with others. She also reminds people that any extra produce can be donated to the Food Bank, which is open the fourth Wednesday of every month. The mentoring club will also be running a produce stand later this year at local events.

The Garden of Eat'n was honored recently with a grant from the National Garden Association, whose mission is to support youth gardens and foster an appreciation for gardening. Chosen from among 1,700 other similar programs throughout the U.S., the garden received a $250 gift card from Home Depot towards seeds, tools and other supplies.

Two more group work and planting dates are planned in April and May, although the garden is generally open to the public at any time. Beds and space are available on a first-come, first-serve basis.

Why Pennsylvania court ruling is a win for Democrats