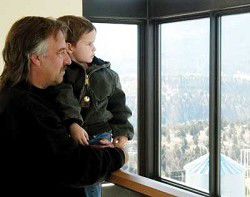 At the third-floor observation tower of the new airport terminal, 4-year-old Jamieson Petroski of John Day is mesmerized at the sight of planes in flight. His dad Paul says they've gone to several airshows together since his son was a baby.

At the third-floor observation tower of the new airport terminal, 4-year-old Jamieson Petroski of John Day is mesmerized at the sight of planes in flight. His dad Paul says they've gone to several airshows together since his son was a baby.

JOHN DAY - A new airport terminal was ready for take off Sept. 11 as a record number of visitors made their way to the annual Grant County Air Search Fly-In.

"Today has been a great first day for the new terminal building," said Colin English, who manages the Grant County Regional Airport. "It's a great way to start."

The facility was the highlight of the event for young and old who took the opportunity to explore every nook and cranny.

Some climbed the stairs or took the elevator to the third floor to view airplanes taking off and landing. Others admired the airport lounge which sports a fireplace, cozy sofas and a couple large flat-screen TVs.

One visitor noted the lounge looked like a fancy hotel lobby.

That's just one of the big updates.

"There's no comparison," said Delores Bagett of Canyon City, a member of the air search team.

"The lobby will be so appreciated by other pilots visiting, and there are bathrooms, showers and a kitchen," she said.

Andy Vogt of Mt. Vernon noted that the old building had no room for conferences and operations, and no lounge.

Just outside the terminal, some sat at tables enjoying a Cliff House Catering breakfast, complete with huckleberry pancakes - the cooks served more than 200 people.

Others, while waiting for a free airplane ride, had their eye to the sky viewing the U.S. Forest Service Malheur Rappel Crew as they glided down two ropes from a hovering helicopter.

Click here to order photosWhen the "all clear" signal was given, children ran out to the grass near the runway to gather up candy dropped by Ron Lundbom from his ultralight aircraft.

In all, 95 passengers enjoyed 46 flights.

After watching their dad, Ruben, rappel from a forest service helicopter, the Griego siblings from Prairie City enjoyed a plane ride.

"Everything looks so small from up there," said 11-year-old Cynthia.

Their brother Cisco, 12, was impressed by the two elk he saw near Pine Creek Road.

It was 11-year-old Kalia Talsma's second Fly-In. She flew over Prairie City with pilot Tom Berry in his Cessna 152.

Other kids could be heard exclaiming, "That was awesome! ... That was so fun!"

They had just jumped out of Frank Stinnett's Cessna 172.

Nathaniel Hobson, 10, of John Day said, "That was the best plane ride in the world."

"I thought it was awesome and cool," said his 8-year-old sister Rebekah.

Anyone who missed the grand opening of the new terminal is welcome to visit during regular office hours, 8 a.m. to 5 p.m. starting on Sept. 27. For more information, call the airport at 541-575-1151.

See stark contrast between what Trump and Obama said about protests

Family attorney reacts to upgraded charges: This should be 1st-degree murder