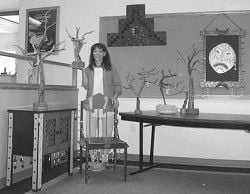 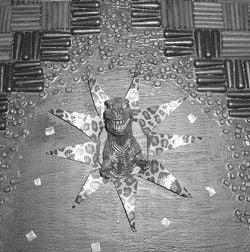 JOHN DAY - For FirstBank artist of the month Kephera, nothing is wasted when creating art. She believes that everything we need is right in front of us if we just look for it.

Kephera goes for hikes and gathers sage for her sculptures. She calls these hikes "treasure hunts." She looks for interesting pieces that "scream" to her.

"Just because they're not panning for it, doesn't mean there's not gold in them there hills," Kephera said.

After she gathers the bark, she peels each piece by hand. Then she shaves the outer layer off using a dremmel. This part takes the longest, but it is the most interesting because it exposes the beauty of the wood, Kephera said. Next, she mounts the sage on a special base that hardens. She coats the sage with polyurethane and covers the base with moss she collects from river rocks.

Each piece is special to Kephera.

"I name each one. Each one is different and has its own unique personality," Kephera said.

Kephera claims that sage is a wood that is not given enough attention and it is harder than oak.

"I don't think sage has been given any credit. It's considered a weed," she said.

Kephera's sage sculptures range in price from $30 to $500, depending on the size and uniqueness of the wood. She is willing to create a piece within a person's budget.

"They help to cleanse your aura and remove anything negative," Kephera said.

Smudge sticks are an old American Indian tradition. To use them, simply light one end, blow it out so that it is still smoking. While it's still smoking, pass it around the outside of your body.

Kephera also has some of her furniture pieces on display. Working with furniture is her favorite.

Kephera has a cabinet and a chair on display that she has decorated with things she has found or already had lying around, such as pearls, black walnuts, purse straps, metal from a candy tin and leather. The chair is a Western Rococo chair, using a type of art from the 1700s.

"It almost jams your terminals there's so much detail," she said.

Kephera is most proud of her wall hanging "Coming out of the void." The piece is a 3-D papier mache image of a face. The face has leather strips and plant roots for hair. Kephera used the wooden crate that her dishwasher was packed in to create the frame for the piece.

"I never know how a piece is going to look until after I start on it," she said.

Kephera has been interested in art since she was a child. Her mother encouraged her to be creative. She has traveled all over the U.S. studying different cultures and how to work with different mediums.

Kephera works year round as a phone counselor, helping people work through daily problems. She is fighting fire for Tri-Co with her boyfriend.

Cooler air settles in behind Zeta