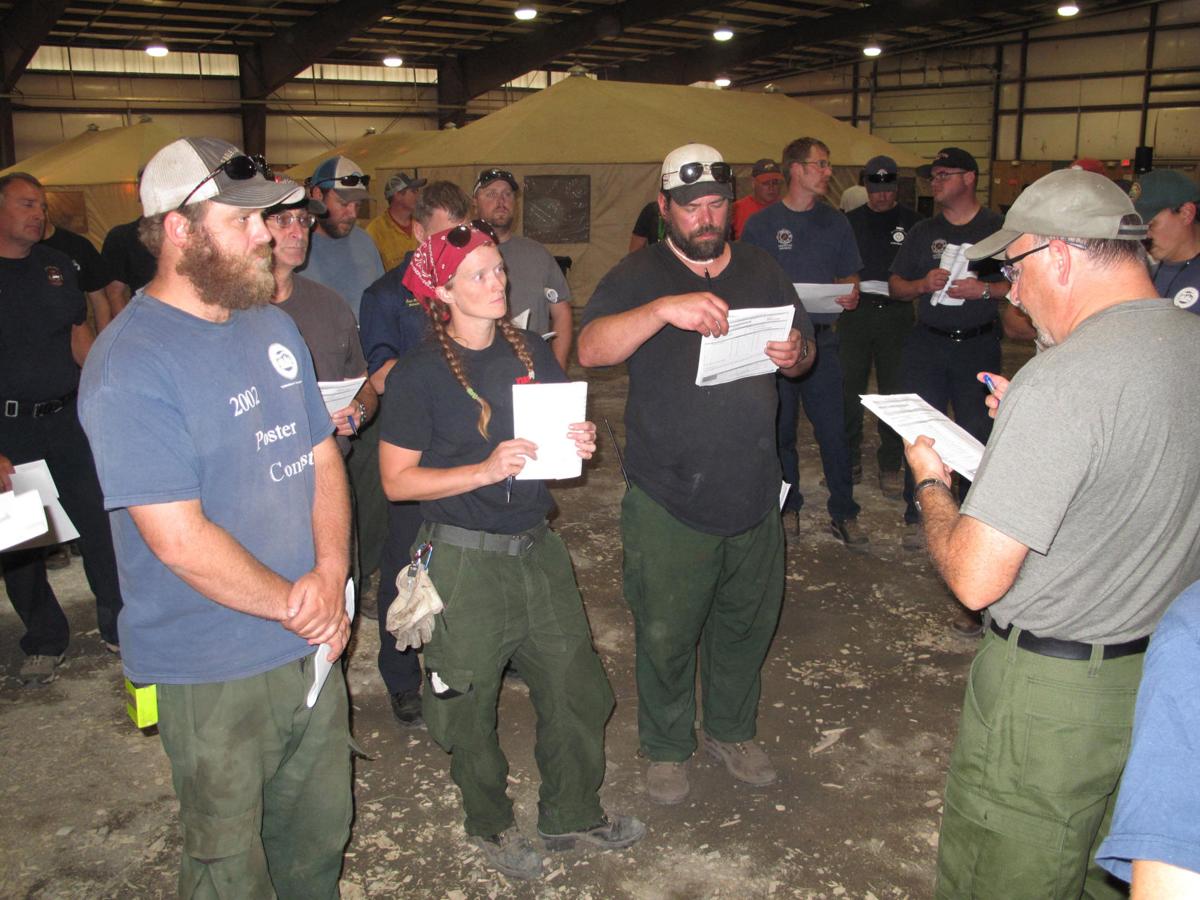 Before they begin a shift and after they finish a shift, firefighters attend a briefing. The information ranges from a status report on the fire to a pep talk and caution to be safe. 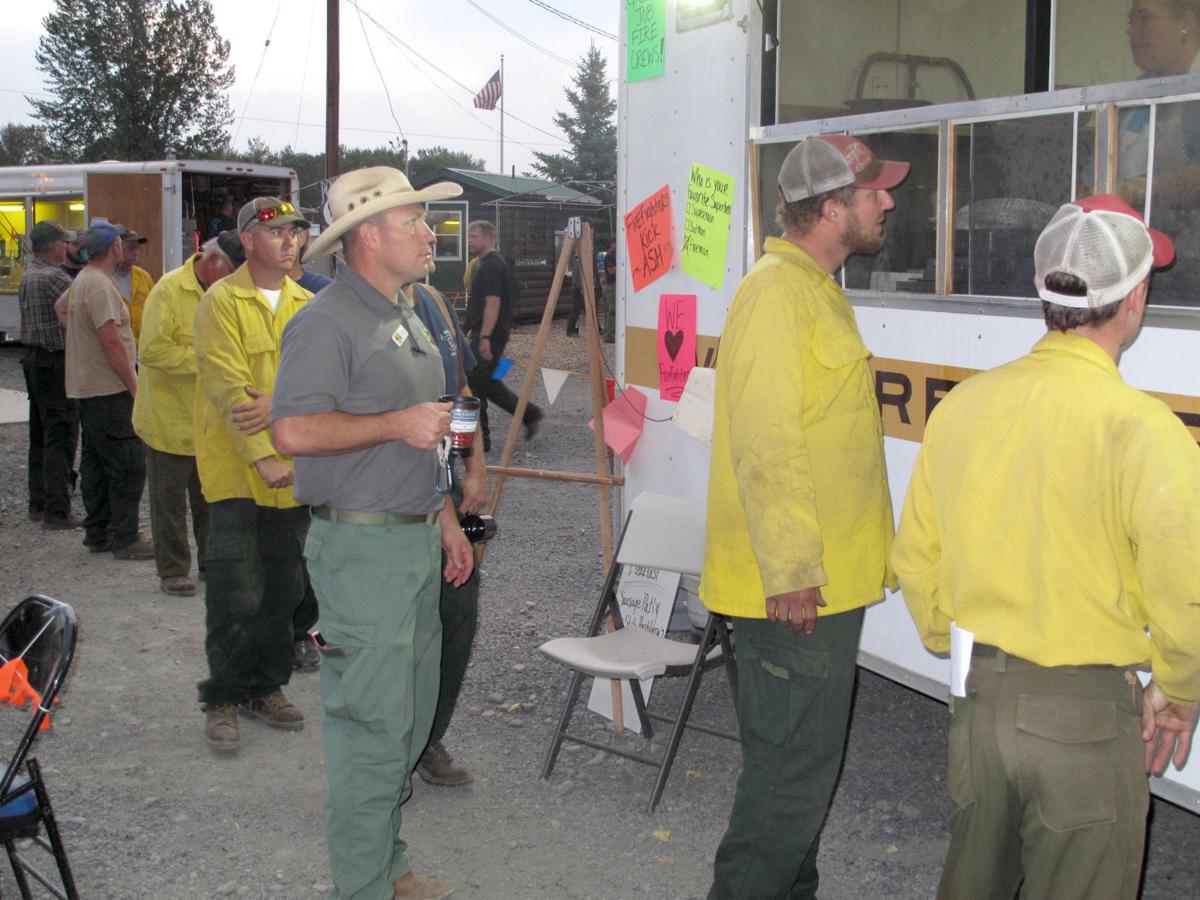 Firefighters combating the Canyon Creek Complex fire line up for food at base camp at the Grant County Fairgrounds in John Day following a shift change. 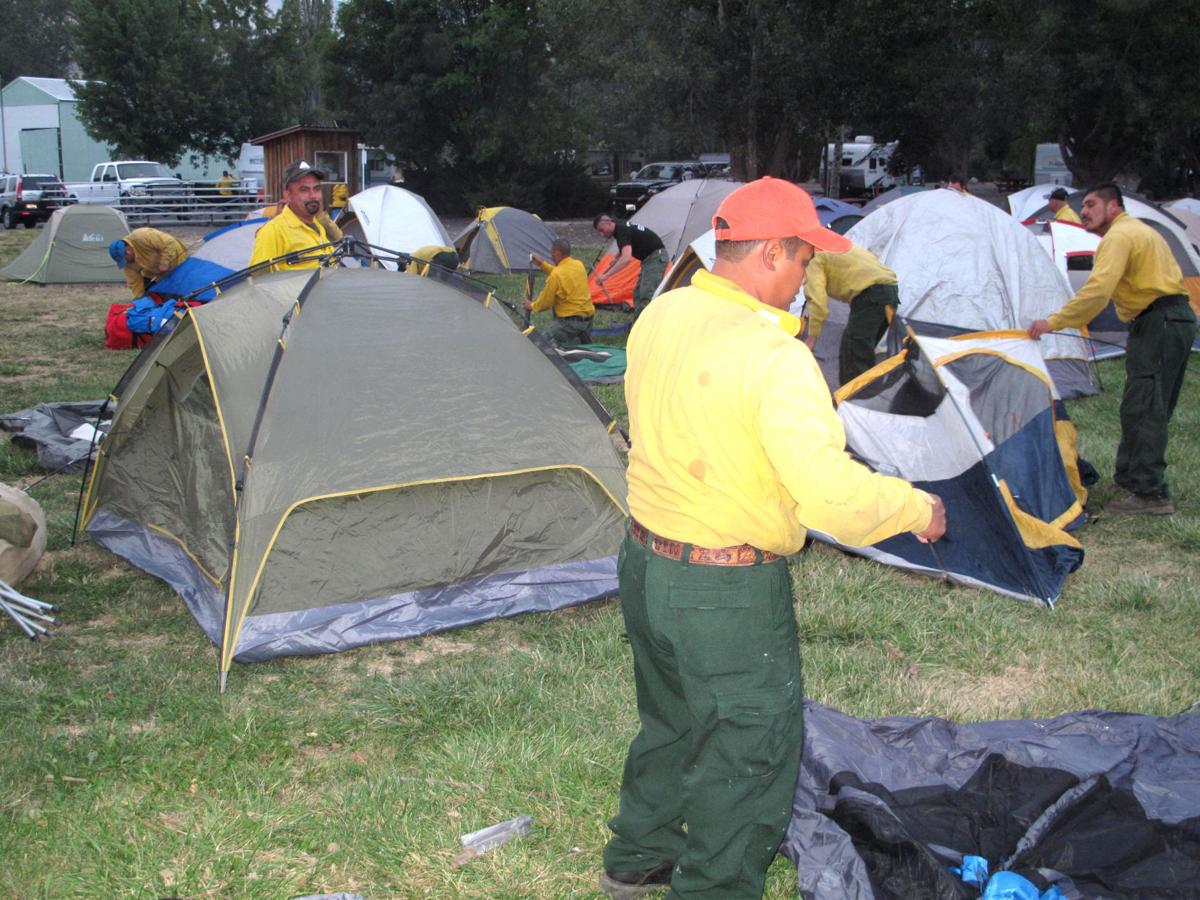 Firefighters set up their tents at the base camp in the Grant County Fairgrounds. Firefighters often work 16 hours, sleep for eight.

Before they begin a shift and after they finish a shift, firefighters attend a briefing. The information ranges from a status report on the fire to a pep talk and caution to be safe.

Firefighters combating the Canyon Creek Complex fire line up for food at base camp at the Grant County Fairgrounds in John Day following a shift change.

Firefighters set up their tents at the base camp in the Grant County Fairgrounds. Firefighters often work 16 hours, sleep for eight.

It’s when vital information on fire behavior, trouble spots and weather conditions is transferred between day and night shifts.

Shift change happens twice a day, generally around 6 a.m. and 6 p.m., though shifts can be extended based on fire behavior.

“It’s a nice, smooth transition, as the incoming folks communicate all the intelligence on what’s been done and where the hazards are and provide a situational awareness update to the outgoing folks,” said John Kennedy, an operations section chief helping direct efforts to fight the Canyon Creek Complex fire.

There’s a significant and visible contrast in energy levels between those returning from the front lines and those heading back out.

“When you’re heading back out on a fire, you’re obviously fresher; you got some sleep, you got some good food in your belly and you got some coffee in your system, so you’re a little more revived,” said Jesse Kiene, a Bureau of Land Management firefighter from Medford.

During your shift, “You’re ramped because that shift requires your energy,” he added. “But once you drive off and you’re heading back into camp, that’s when the exhaustion sets in.”

By the time you get back to base camp, “All you want to do is eat and go to bed,” Kiene said. “Those are your two priorities.”

After eating and putting down some coffee, “You’re generally pretty excited to go out there; every day’s something new, and you’re kind of excited to see what might be going on,” said BLM-Medford firefighter David Way.

But when you’re coming off a shift, he added, “You’re pretty tired and generally sore and just want to eat as fast as you can and bed down and get as much sleep as possible, which sometimes means no shower even if they’re available.”

While firefighters getting off shift will generally filter in to base camp at the Grant County Fairgrounds in John Day over a few hours, depending on which area of the fire they’ve been stationed at, supervisors attend an in-depth shift change briefing at base camp.

After the meeting, supervisors will share specific details with their crews about what they will be doing and where they will be working.

“The actual time of the information transfer might only be 15 minutes, but the whole change from the time people leave here and get in place and the time the night shift leaves and gets back here probably is (about) one to two hours,” said Canyon Creek Complex fire operations section chief Jeff Surber.

The shift change briefings at base camp are also a pep talk, safety exhortation and weather forecast.

Fire safety officer Paul Gauchay encouraged them to be safe.

On one hand, he reminded firefighters that they are “providing comfort to a lot of families out there that might need that assurance right now.”

But he also added, “Keep it in perspective. If it gets hot in there, know when to back out. Nothing’s more important than your life. Know where those safety zones and escape routes are.”

Neil Miler, who is in charge of night operations, reminded those at the briefing that protecting lives, including their own, is the No. 1 priority.

Firefighters are here to stop the fire and protect property, “but we’re also here to come home every shift and get back to our families,” he said. “Make sure you have an escape plan.”

A lot of the people combating the Canyon Creek fire have been fighting fires for 75 to 90 days now, and making sure they get the proper rest between shifts is a priority, said public information officer Traci Weaver.

“If they’re not getting that appropriate rest, that’s when accidents happen, that’s when poor decisions are made,” she said.

Firefighters operate under a two-to-one rest ratio, meaning if they work for 16 hours, then they are required to get eight hours of rest. If a shift is extended because of fire behavior, then those rest hours are also extended to meet the guidelines.

“We try to get these people rested so when they go back out, their minds are clear and their bodies are ready to go,” Kennedy said. “Firefighting is unique because you can’t make mistakes out there.

“The end state of a bad decision could be a life-threatening issue,” he added. “The tempo is very high out there, and they have to have that clarity in their minds on what the mission focus is.”

These voters are dancing their way to the polls