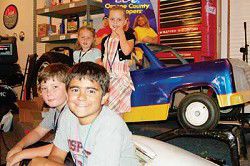 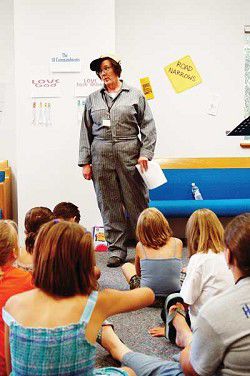 <I>Eagle photos/Angel Carpenter</I><BR>Linda Wiese, "driver's ed instructor," teaches about the Bible's Ten Commandments. "Are they the 10 suggestions?" she asked. "No!" was the fervent reply.

<I>Eagle photos/Angel Carpenter</I><BR>Linda Wiese, "driver's ed instructor," teaches about the Bible's Ten Commandments. "Are they the 10 suggestions?" she asked. "No!" was the fervent reply.

JOHN DAY - "Custom Garage" was the theme at the Church of the Nazarene's Vacation Bible School Aug. 10-14.

Leaders Greg and Marla Armstrong and a group of volunteers had the church transformed into a repair shop, from a miniature truck, toolboxes and auto supply shelves in the sanctuary to the street signs on the wall reading "Rough Road, Pray Hard" and "Keep Right, Read Your Bible" - even the stairs were turned into highways with divider lines.

During the week the children attending participated in outdoor and indoor activities, including singing, crafts, a pinewood derby, games, snack time and Bible stories and memorization.

This year there were at least 30 adult helpers with 82-88 children attending each day.

The children raised approximately $575 for a project to send hand-cranked radios with the Bible narrated on them to third-world countries.

It was a race between the boys and girls to see who could donate the most and Marla, dressed in a mechanic's uniform, announced that the girls won hands down, earning them the opportunity to give youth pastor, Brad Williamson, a "car wash" later that evening - spraying him shaving cream then dousing him with water from a garden hose.

One verse the children learned was "Love the Lord your God with all your heart, soul, mind and strength and love your neighbor as yourself" from the Book of Luke, chapter 10.

To go along with the scripture, they learned about the Good Samaritan who stopped to help a man who'd been robbed and beaten, when others had passed him by.

Wiese spoke with one small group rotating into her classroom.

She asked the children how they would react in certain situations at school or with a neighbor, when being nice might be difficult.

She challenged them to ask themselves, "What would Jesus do?" and be like the Good Samaritan, even though it could be tough.

"It was an awesome week where the kids did have fun learning about God and learning to love one another," said Rev. Wiese. "The other part that was significant was introducing Jesus and what Jesus had done for them."

'A private matter': Biden on US Catholic bishops' potential rebuke