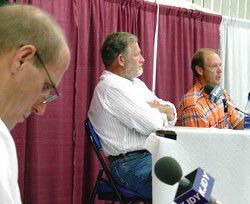 Left to right: Moderator Scott Mallory, Dave Traylor and Mark Webb Sept. 28, during the battle of the candidates at the Pavilion.<I><BR>Eagle photo by Tina Cook</I> 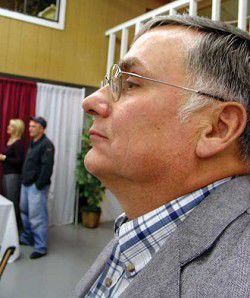 Left to right: Moderator Scott Mallory, Dave Traylor and Mark Webb Sept. 28, during the battle of the candidates at the Pavilion.<I><BR>Eagle photo by Tina Cook</I>

JOHN DAY - It was a big turnout for the recent county judge candidate debate.

More than 175 local residents came to the Pavilion Sept. 28 to hear candidates Mark Webb and Dave Traylor explain why they should be elected county judge in November.

Many of the residents who turned out already had a candidate picked.

"They both speak so well. They both are very dedicated. I have no problem with either one of them, but I'm voting for Mark Webb. I think he knows what he's doing very well," said Ruth McPherren of Prairie City.

Former Blue Mountain Eagle editor Scott Mallory was the moderator. The first question of the evening set the tone for how each candidate would respond.

"What will it take for our children and our grandchildren to live in a Grant County that has a thriving economy based on its abundant natural resources?" Mallory asked.

"We are resource dependent; we can't ignore that," Webb answered. "Unfortunately, most of those resources are on public lands. Land-use priorities have changed ... we need to be realistic about it ... if we want to prosper, we're going to have to talk, and we're going to have to be smart. We need to retool our attitudes and we need to retool our vision so that we can continue on and preserve what's good about the past and go into the future, because I don't think we can go back."

"Natural resources have always been the bread and butter of Grant County," Traylor said. "Management and pro-active management that we can do in a collaborative effort with the Forest Service ... we'll be able to be stewards of our resources and produce products from those resources on into the future."

Traylor continued to explain his ideas on the safety corridor plan.

"The fact that we might be sued for safety corridors is a defeatist attitude and will get us nowhere," Traylor said.

"Dave calls that a defeatist attitude. I call it realistic," Webb replied. "The fact is, safety corridors, per se, are not illegal. Dave's plan is illegal. Those are two different plans. They may wash eventually, but right now they're illegal and it's inappropriate to promise anything on the basis of that."

County Judge Dennis Reynolds was impressed by the debates and was glad that the local paper had hosted the event and the local radio station aired it.

"I think it's exceptionally important that we have an informed public when it comes to making decisions about the future of Grant County's leadership," Reynolds said.

The audience was also impressed with the debate.

"I think both candidates did a pretty good job and I admire both of them for going through the public process and ordeal of being dissected on public stage. I wouldn't be able to do it," said Greg Jackson of Canyon City.

"I enjoyed the part where they asked each other questions. They put each other on the spot and that forced them to give answers that they hadn't given before. It was informative, overall," said Ryan Joslin of Mt. Vernon.

"I already had a candidate picked. My mind didn't change, but I thought both candidates had some excellent points to consider," said Jim Sproul of John Day. "In November, we'll all have a chance to vote and I encourage everyone to exercise their right to vote."

Audio of the debate is available on the Blue Mountain Eagle's website. Go to www.bluemountaineagle.com and click on the Battle of the Candidates banner ad.

LinkedIn co-founder: Business leaders need to speak up on the democratic process