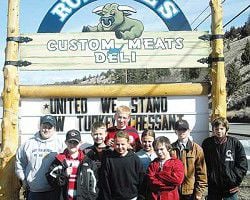 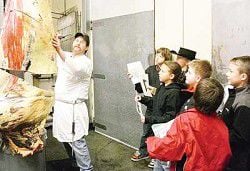 Tracy Moss shows the group a hanging cut of beef.

Tracy Moss shows the group a hanging cut of beef.

On March 5, 2010, the Izee Livestock 4-H Club took a trip to Russell's Custom Meats and Deli to learn about the cuts of meat.

Tracy Moss showed us where the cuts of meat are on the hanging beef. We learned where the roasts, stew meat, steaks and ribs come from and the meat that is used for ground beef.

Kathy Moss treated us with jerky and steak while we were there.

Listen to Biden's new answer on question of court packing