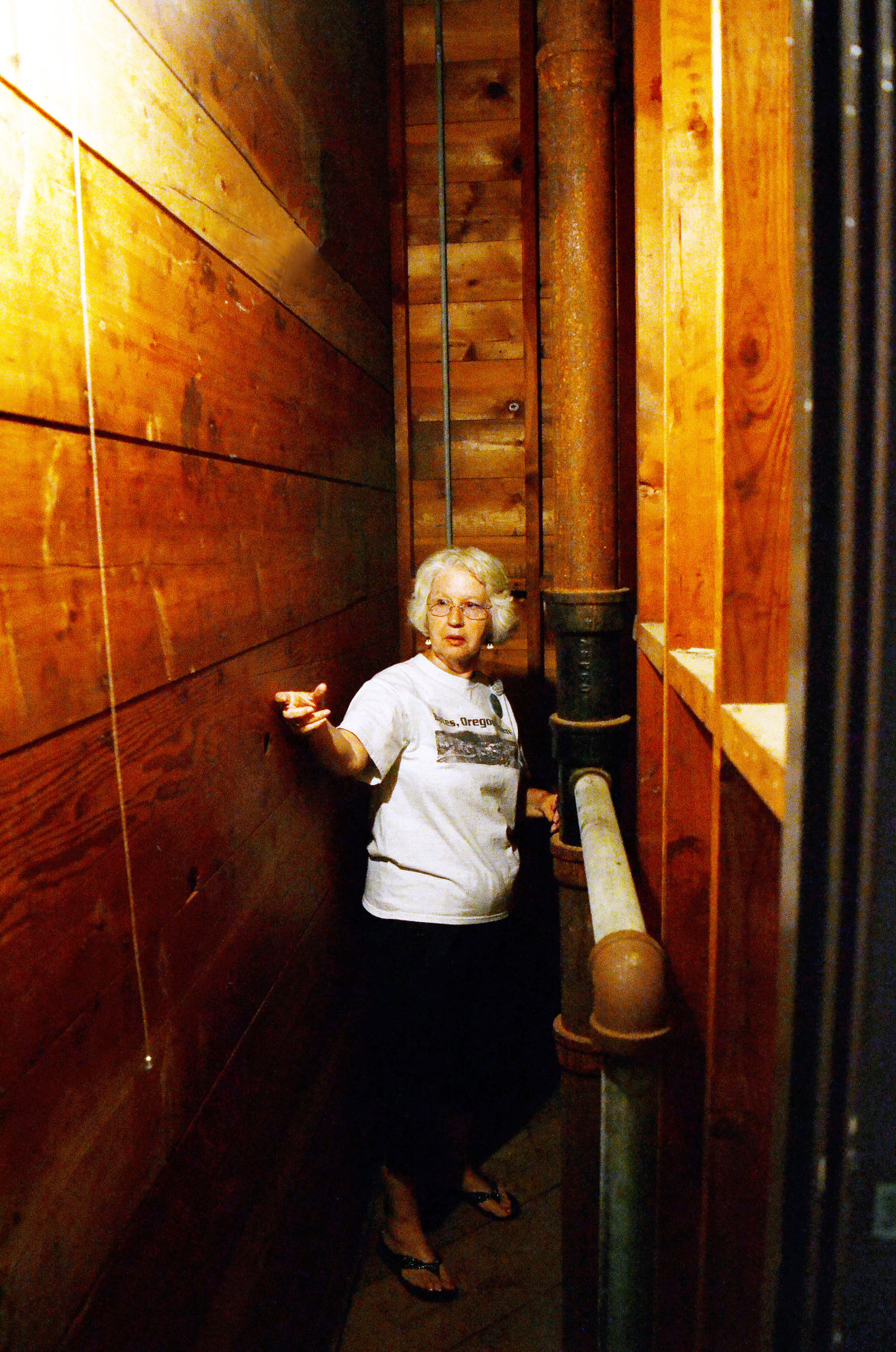 Prairie City resident Frances Preston, a 1965 graduate of the Bates School who is leading the effort to save the 40-year-old building, points out details in the structure's woodwork during tours prior to the town hall meeting Monday.

Prairie City resident Frances Preston, a 1965 graduate of the Bates School who is leading the effort to save the 40-year-old building, points out details in the structure's woodwork during tours prior to the town hall meeting Monday.

PRAIRIE CITY — The future of the Bates School building was the topic of an April 18 town hall meeting in the Prairie City School cafeteria.

Prairie City School Board members invited the public to hear the school district’s plans for the facility, actions they have already taken and discuss moving forward with removing the building from school grounds. Tours were given of the facility prior to the meeting.

Robert Waltenburg, Grant County ESD superintendent, facilitated the gathering, attended by school board members and local citizens on both sides of the issue.

The school building, which once served students in grades 1-8 in the logging town of Bates, was moved to Prairie City School property in 1977.

It was used as classroom space until 2012, after the elementary library was moved out and music classes ended. After that time, the building was used for storage of the Camp Logan supplies, and has been empty since 2015.

The school board has come to the consensus the district needs to sell the building, due to concerns over maintenance and/or remodeling costs needed to make it usable again. The school board deems it would be too expensive to rectify the likely issues of mold, asbestos and lead-based paint in the structure. As enrollment at the school has dropped off in recent years, school staff are also unable to justify a need for the added space.

“The School Board desires to sell the Bates Building because we do not foresee needing the classroom space,” Superintendent Julie Gurczynski said. “Thousands of dollars are needed for maintenance in the main school building and to educate our students with modern technology and curriculum, and that’s where we would like to focus the money and resources.”

Educational priorities include continuing to increase student computers, acquiring Smart Boards for all classrooms and math textbook purchases, in addition to salary and insurance cost of living increases for staff and increased PERS costs.

However, Frances Preston, Bates School Class of 1965, disagrees with moving the building. In addition to seeing it as a historical site, after talking to local residents about what they would like to see done to the Bates building, she now feels it still offers practical uses.

At the town hall, she said, “As a result of my obtaining signatures, I listened to what the people had to say, and at that point, I changed my reason for saving the building from historical, moving the building to the Bates State Park to establish a museum, to educational.”

Citizens she spoke to had different ideas of uses for the building. Some of the ideas were a charter school, a community learning center, a dorm to house foreign exchange students, housing for families in emergencies and a vocational tech center.

Several at the meeting who went to school at Bates spoke out in favor of saving the building or portions of it. Suggestions included using the lumber for re-building efforts by those burned out of the Canyon Creek Complex fire, and re-visiting the Friends of Bates and Oregon State Parks — both of which declined offers in recent years to take the building — to see if they might now be interested.

Others were concerned about the cost of maintaining the building. Diana Smith said the building has too many issues to merit the costs of keeping and restoring it. She said she understood the sentimentality of saving the building, but that was outweighed by the issue of practicality.

Teacher Christie Winegar said, “It’s beyond it’s functionality,” adding, even if enrollment should go up, there are already a half-dozen empty rooms in the main school building to accommodate them.

Wanda Voigt questioned how expensive it would be to demolish the building, because getting rid of some of the health hazards in the buildings, such as lead-based paint, can be costly.

Most at the meeting were against demolishing the building before other options were explored further.

Mike Wall, school board chairman, said, “Our main objective is to have someone purchase it and move it. We don’t want the Bates building torn down. It has too much history. It just needs to be moved away because there is no use for it.”

Getty photographer: There so many people on the verge of the abyss

Hear Dr. Atlas' comments on scaling back testing in August