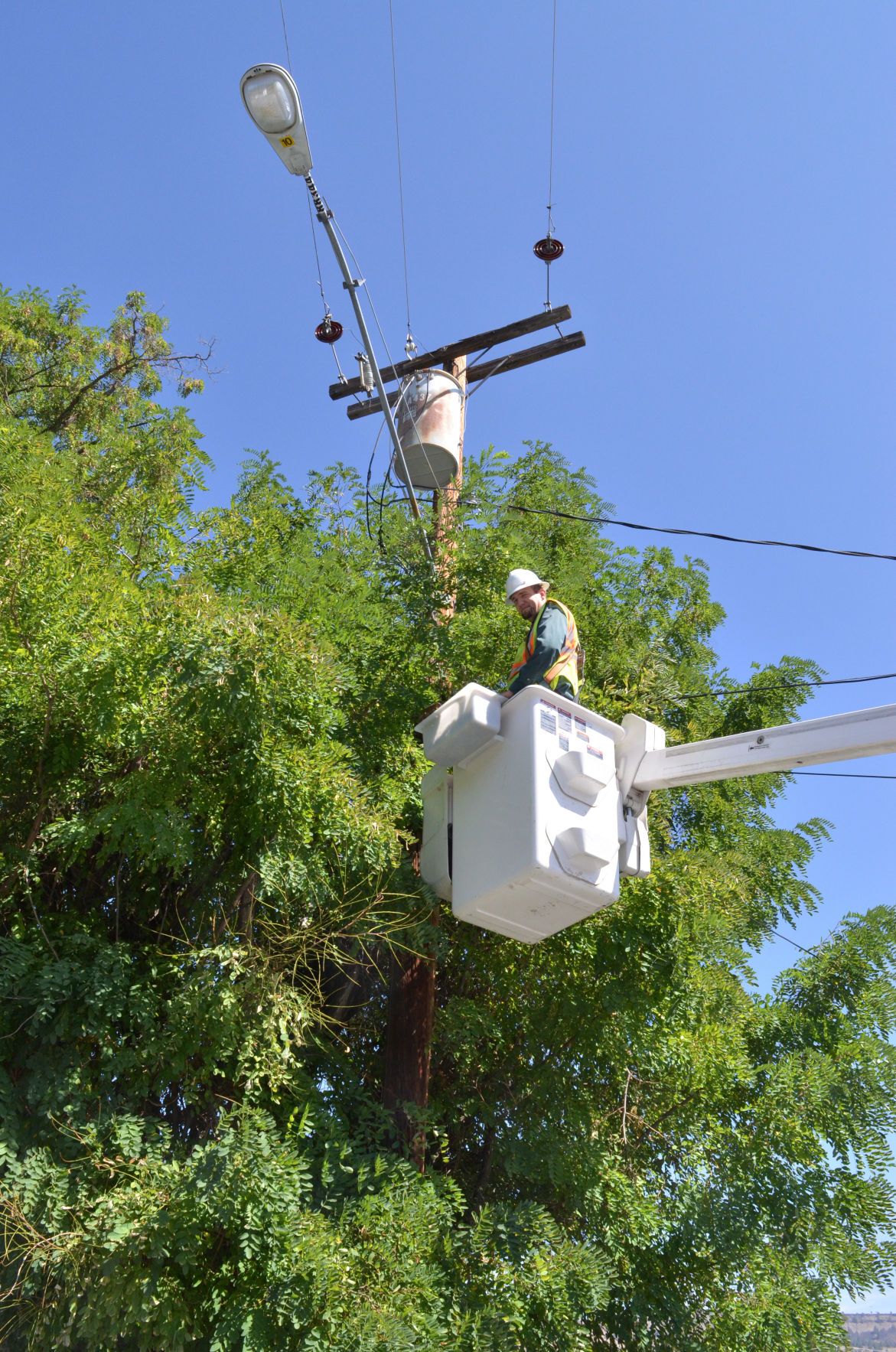 Joe Rigney, an outside technician with Oregon Telephone Corporation, works on a fiber cable drop for a home in John Day Aug. 24. 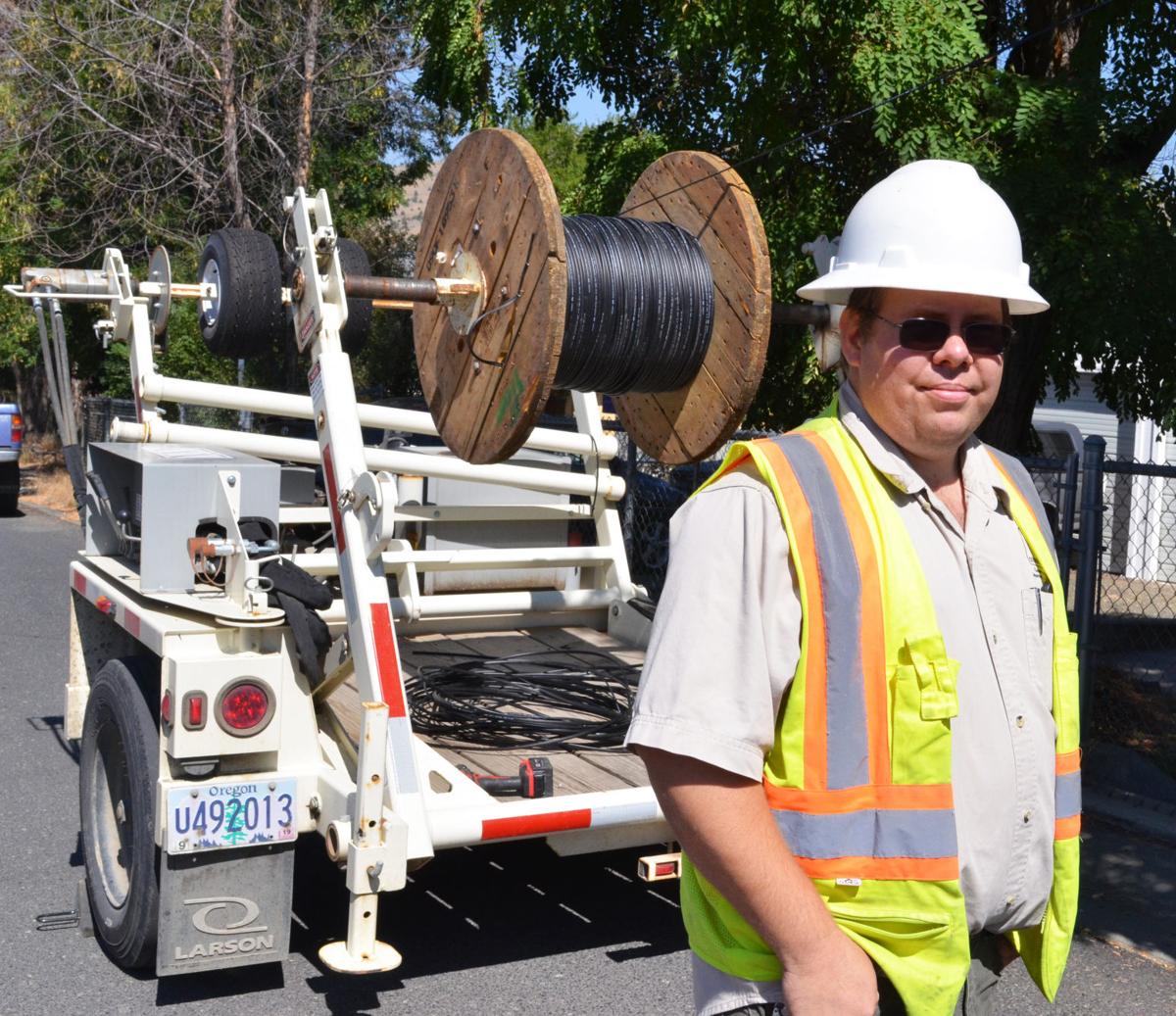 Kevin Hilliard, who provides IT and tech support at Oregon Telephone Corporation, assists with installing a fiber cable drop for a home in John Day Aug. 24.

Joe Rigney, an outside technician with Oregon Telephone Corporation, works on a fiber cable drop for a home in John Day Aug. 24.

Kevin Hilliard, who provides IT and tech support at Oregon Telephone Corporation, assists with installing a fiber cable drop for a home in John Day Aug. 24.

There shouldn’t be cities in Grant County without cellphone coverage or places where one neighbor has internet access and another does not, he said. The county needs to keep up with new technologies that create new opportunities and not be a laggard, he said.

Green advised the board that the coalition’s goal should be to provide the fastest internet possible at the lowest price possible to as many residents as possible. Broadband access will enable area residents to be educated online or for high-tech businesses to create new jobs in the county.

Established April 10, the coalition is an intergovernmental agency between Grant County, John Day and Seneca with a cost-sharing agreement that commits financial resources from each participating agency on a per capita basis.

To achieve its goals, the coalition formed a public-private partnership with the Oregon Telephone Corporation, which has already run fiber to many of its customers. Green said competition from a public entity will motivate private enterprise to improve internet service in Grant County.

“Many residents in the county have questioned why we are proposing to create an additional connection to the main internet when there are already existing fiber connections,” Green said in his memo to the board. “The simple answer is that, even though those assets were financed using public funding, they are owned and operated exclusively by private sector providers. These providers can regulate where and under what conditions our residents have access to the internet.”

Commstructure, which will provide infrastructure design and project management for the first phase of the coalition’s broadband network, helped draft a detailed application for a $2.9 million U.S. Department of Agriculture Community Connect grant.

The city of John Day applied for the grant in May, intending to cover the 15 percent match of $450,000 from the $1.8 million it received as a state appropriation in 2017. Leveraging the state funding by 7.5 times is good use of that money, Green noted.

The city spent significant funds on due diligence for the competitive grant, and the USDA will send personnel to Grant County to verify internet access conditions, Green said. The coalition will learn if it is awarded the grant in about six weeks, but the lag time in receiving the funds after that could be reduced as a result of the pre-planning already accomplished, he said.

“Our state funding was just to build the dark fiber connection to Burns,” Green told the Eagle. “The USDA grant broadens the scope significantly by providing a direct connection to almost every property owner along that route.”

The plan submitted to the USDA calls for running a main fiber cable from Canyon City south to the Harney County line. Connections will be made to all premises within the plan’s service area along Highway 395 and the city of Seneca. Free internet access will be provided at Seneca City Hall.

Greenwood said the service area currently has very poor internet access, so improved access will meet the goals of the grant.

“There were specific bandwidth and coverage requirements that had to be met for the grant application, so they adjusted the approach to meet those,” Green told the Eagle about Commstructure’s work. “The biggest one was that anyone within the proposed funded service area had to be given access to the network.”

If homes or businesses are located just outside the service area, a fiber drop still could be provided through the public-private partnership with Ortelco, Green said. If a small neighborhood outside the area wanted service, they might need to form an improvement district to help pay for the line, he said.

Green outlined four network development phases for the coalition board. Phase 1 includes planning, design and financing; Phase 2 will begin upon approval of the USDA grant and involves running a main cable all the way to Burns and hooking up to the internet backbone running along Highway 20; Phase 3 includes building out to main urban areas in Grant County and residents within the initial service area; and Phase 4 will expand coverage to outlying communities.

If the coalition receives the full $3 million USDA grant, Green said, it would be able to construct a line from Canyon City to Seneca, connecting all Seneca premises and many along the way.

The $1.3 million left over from the state appropriation will be used to leverage grant applications to complete Phase 2 and begin Phase 3, Green said, adding he’s already working on a separate funding package to complete the line from Seneca to Burns. Ideally, the entire line from Canyon City to Burns would be built at the same time in a single contract, despite multiple funding sources, he said.

The initial project will not connect all of John Day but will get the network closer to the “big pipes” along Highway 20, including the state of Oregon’s internet backbone, Green said.

The board could consider operating the network under three possible models — as a wholesale dark fiber provider, with private companies responsible for delivering broadband to each premise; as a public utility like city water or sewer, as established in Sandy; or as an open access network that functions like a public highway open to all transportation, as set up in Ammon, Idaho. Green noted that the coalition lacks the resources to pursue the second option.

To help the coalition get started, Green offered to serve as executive director. His pay would come from a 1 percent administrative fee on certain grants he helps the coalition obtain.

In the spirit of transparency, Walker suggested accepting letters of interest from the public to fill the board’s two at-large positions. The board agreed. Becker said he’d like to see leaders from other parts of the county joining them, and Walker said people with technical knowledge should get higher priority.

The board also agreed to meet at 6 p.m. the third Tuesday of each month, rotating to different locations around the county. The next meeting will be Sept. 18 at the John Day Fire Hall.

'Have to laugh to keep from crying': Business owner struggling amid pandemic

Burnett to Dr. Fauci: Is Trump trying to get you to quit?