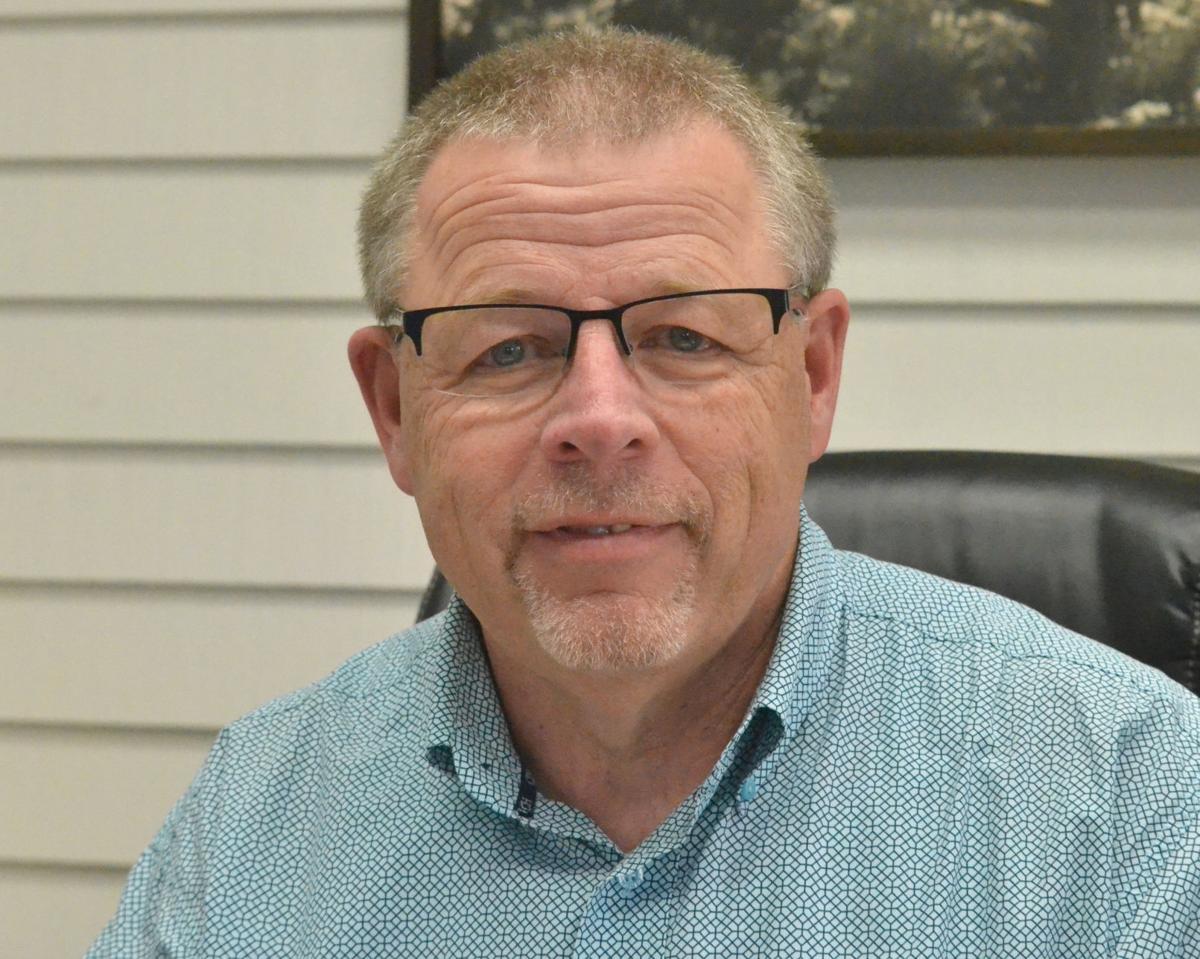 Bob Quinton, who has served on the Grant County Budget Committee for about two years, is being asked by the court to write a letter of interest to be reappointed to another term. 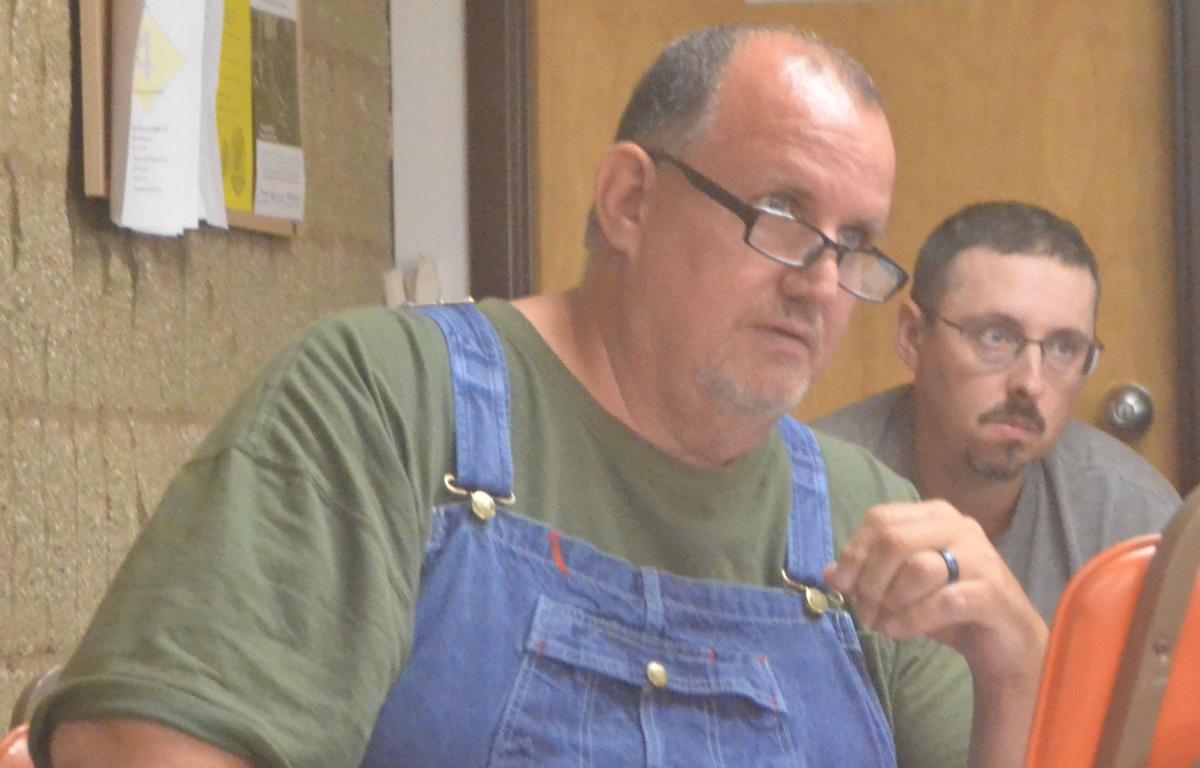 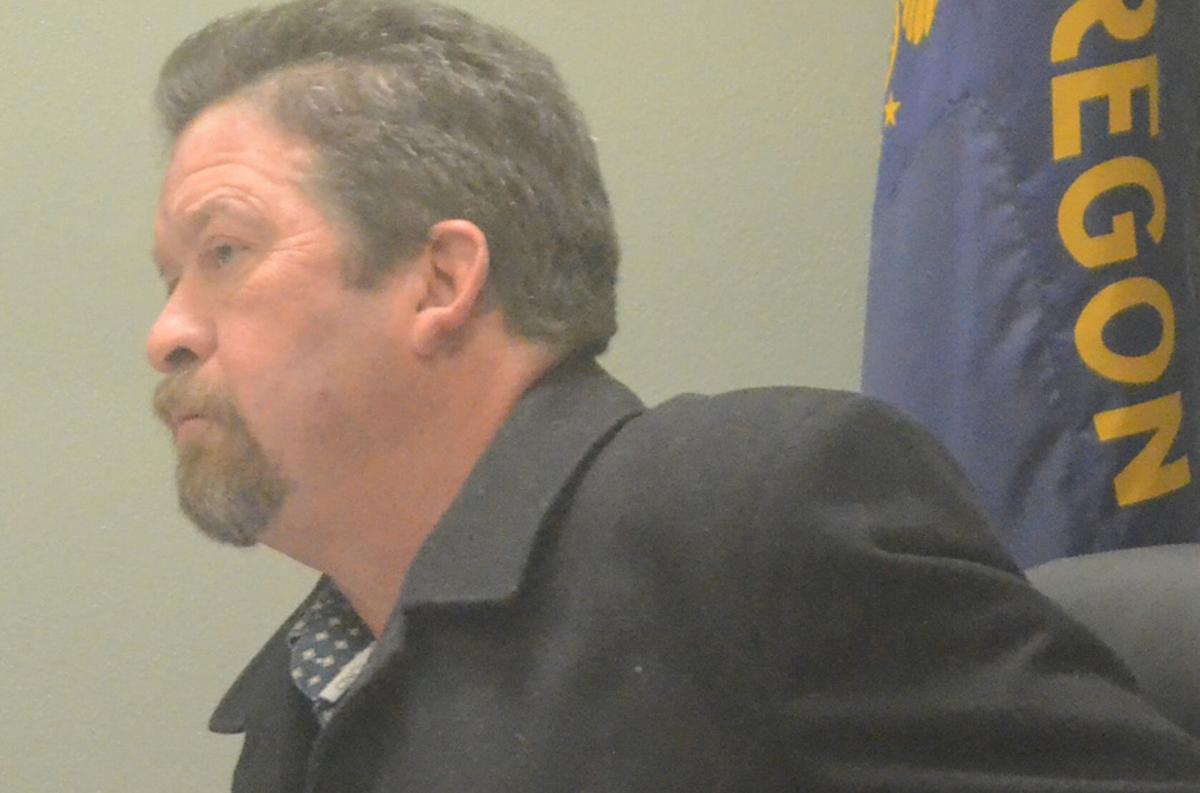 County Commissioner Jim Hamsher discusses Prairie City Public Works Director Chris Camarena’s potential appointment to the budget committee during the Dec. 30 county court session. Hamsher, who serves as the mayor of Prairie City, said he had not spoken to Camarena about the appointment. 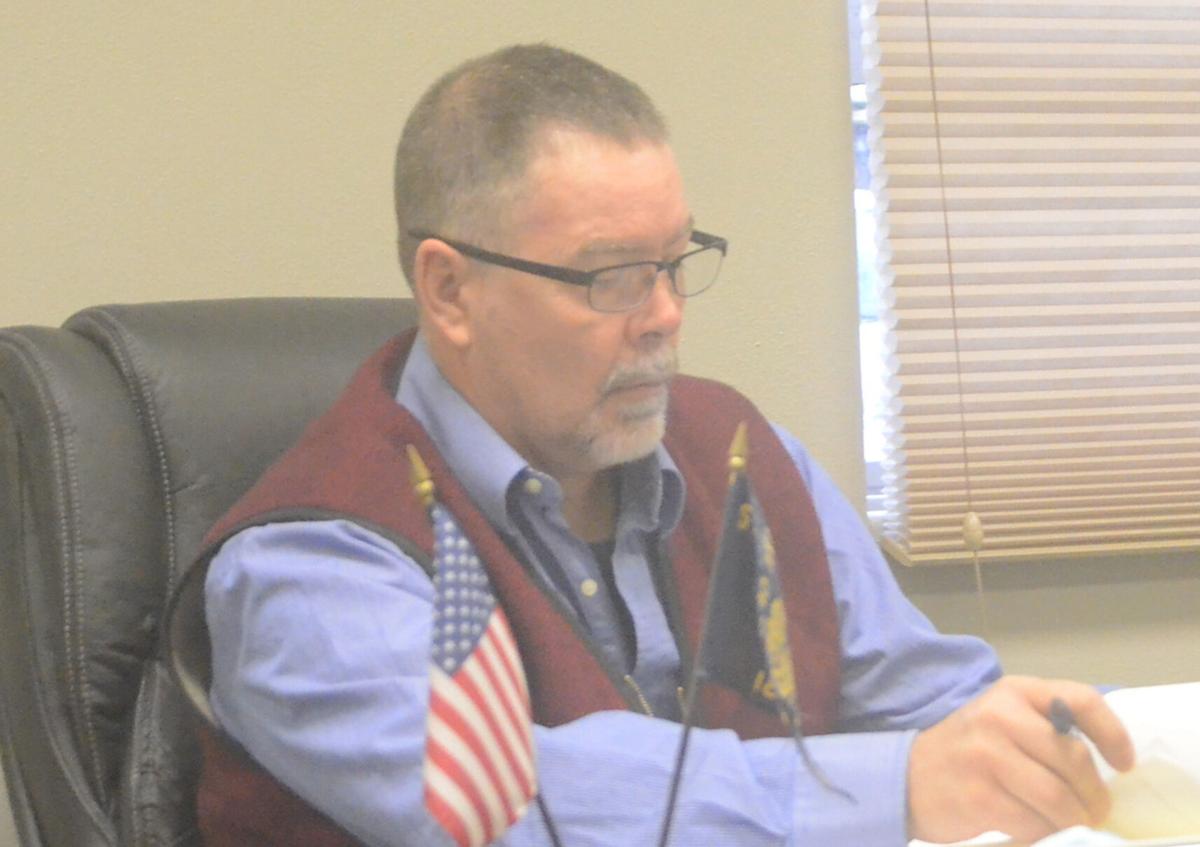 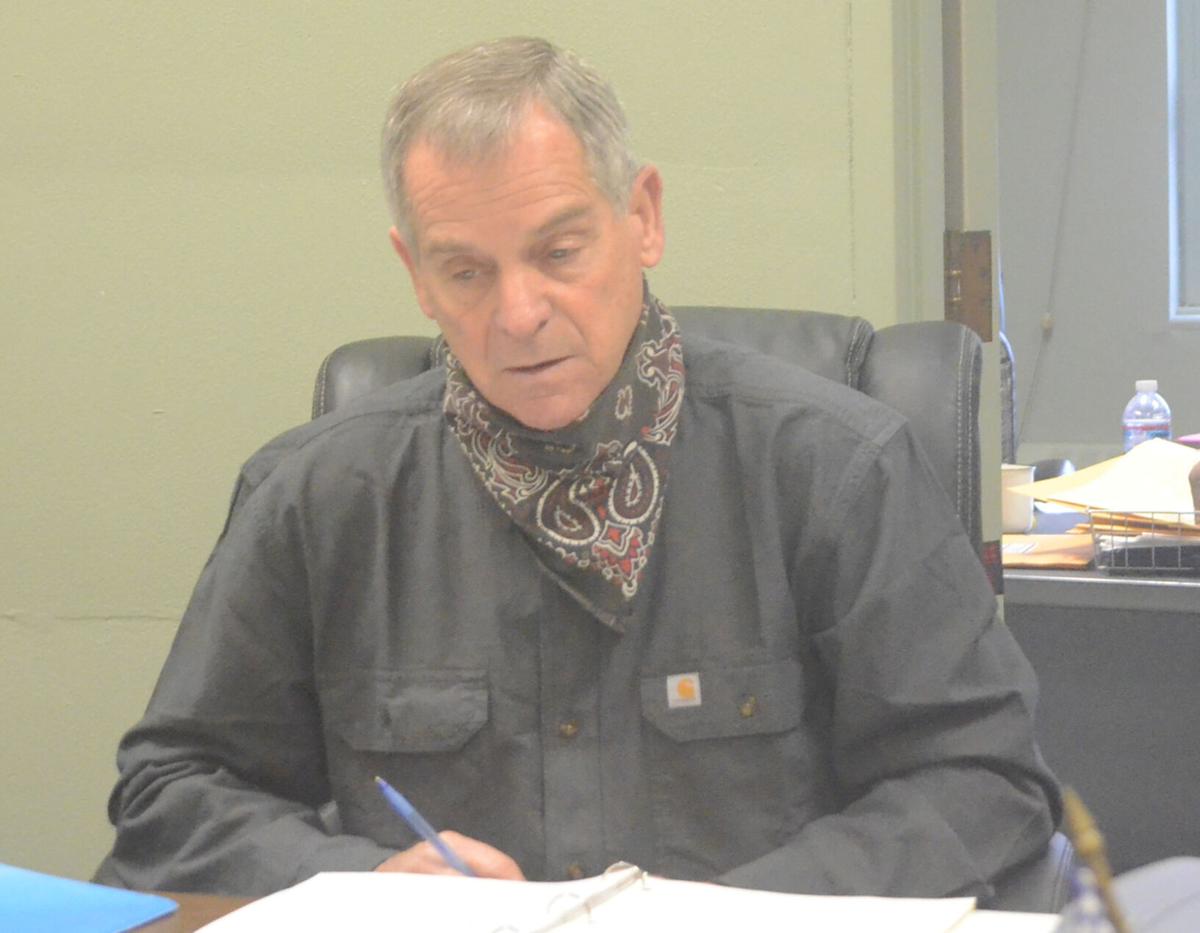 Bob Quinton, who has served on the Grant County Budget Committee for about two years, is being asked by the court to write a letter of interest to be reappointed to another term.

County Commissioner Jim Hamsher discusses Prairie City Public Works Director Chris Camarena’s potential appointment to the budget committee during the Dec. 30 county court session. Hamsher, who serves as the mayor of Prairie City, said he had not spoken to Camarena about the appointment.

Quinton, vice president and commercial loan officer at the Bank of Eastern Oregon, said he did not see the county publicly advertise his seat.

He said the court sent him a letter nearly two months ago asking if he would continue serving on the committee.

Quinton said he filled out the form, stating that he would “absolutely” like to continue serving on the Budget Committee.

“I thought that was the end of it,” he said. “I’ve never once seen the position advertised publicly.”

Myers said Dec. 30 that the court appointed roughly 20 volunteers to various boards and committees in its Dec. 9 session. He said the court did not require those volunteers to reapply for their seats.

“Those were not declared vacancies,” he said. “They were not put out for new members because the current standing and/or sitting members on those committees agreed to stay on.”

Myers said the county’s policy has always been that those incumbent members of those committees keep their seats unless the number of terms limits them.

Quinton said he believes County Commissioners Hamsher and Sam Palmer want him off the committee because he and the other two at-large committee members opposed increasing the number of hours the county pays them during a March 13 Budget Committee meeting last year.

According to the approved meeting minutes, the committee discussed the court’s request to change the county commissioner position to half-time instead of one-third time.

Quinton said that is his “personal opinion of the matter” and that he ultimately does not know why the county commissioners are considering another applicant.

According to the Budget Committee meeting minutes, Myers — on two occasions — said both Palmer and Hamsher should declare a potential or actual conflict of interest and recuse themselves from the discussion.

“Scott advised the commissioners should not be offering input because this would be a direct conflict of interest for them,” according to the approved minutes.

Both Palmer and Hamsher recused themselves from the vote.

According to the meeting minutes, increasing the commissioners’ hours to half-time would have been a roughly six and a half hours a week increase in paid commissioner hours.

Quinton said he remarked at the meeting to both Hamsher and Palmer — with no disrespect to either of them — that they knew the number of hours for which the county would pay them before they ran for office.

He also said Kreger told the commissioners they both receive full-time health benefits.

In the minutes, Kreger also mentioned that raising the commissioner’s paid hours came right after the filing deadline for the open commissioner position. The committee stated that maybe there would have been other people who would have filed for the primary if the pay was different.

“The bottom line is we felt it was more the voting public’s decision than the Budget Committee’s decision,” he said. “And I would stand by that decision.”

Quinton told the Eagle he does not know if that is why the court “mysteriously” has another applicant for the seat.

Hamsher and Palmer both said that is not the reason why they are considering Camarena for the position.

“When you get appointed to a committee or board, it’s not a lifetime appointment,” Hamsher said Dec. 30 after a County Court session.

Palmer said Thursday that someone he did not name went to the courthouse to apply for the Budget Committee and was told they could not.

“If you’re a taxpaying citizen in this county and there’s an opening on a board, you should have the right to apply for it, just like everybody else,” he said. “And if nobody applies for it, we’ll look at the reappointment.”

Hamsher said he thought the county advertised all open positions on boards and committees to the public. He said he also thought all of the people on the board had an opportunity to apply for reappointment.

Palmer said Dec. 30 that he is “struggling” with who to appoint due to the county’s Predator Control Program’s demise.

Palmer said he received phone calls from unhappy residents saying they wanted the Budget Committee replaced for not increasing the funding for the predator control officer position.

Quinton said that Palmer sits on the Budget Committee as well.

Myers said that other matters precipitated cutting the program’s budget by $5,000.

Myers said, as the budget came forward last year, there was money “left on the table.”

“So when you look at a budget and the expenditures, and you’re trying to reduce your spending, you’re looking at programs that had money leftover,” he said. “Is there a way to pay for wiggle room? What we did then was we worked on $5,000 out of the $40,000 budget.”

Myer said he would “hate” to lose a committee member and potentially others over the decision. He told Palmer that the three committee members are all property owners and can identify with the unhappy constituents who called to complain.

According to Grant County Treasurer Julie Ellison, the county spent $36,055.64 on the program last year. She said Thursday that, since the program started in 2017, the county has spent roughly $116,000 on the position.

Palmer said he is trying to do what his constituents elected him to do.

Quinton said the committee discussed the predator control program nearly a year ago. He said the county addressed the possibility of bringing Lulay on as a county employee and additional costs, including a county-owned vehicle and what the county’s liability would be if an employee were to mistake a person’s pet with a coyote.

Ellison said she remembered the meeting but did not know why there was not a more extensive record of the discussion in the minutes.

The court intends to meet in early spring to discuss increasing the position’s funding to full time.

Hamsher and Palmer both said that Camarena serving on the committee presents no more potential conflict of interest than Quinton’s wife, Amber, who serves as the county’s deputy treasurer.

Myers said Quinton is not his wife’s direct supervisor.

Ellison said Thursday that she disagrees with Hamsher and Palmer’s comparison but declined to comment any further.

In an email Monday, Quinton said it was “interesting” that his wife’s employment came up because it was never an issue before.

He said he would have declared a conflict of interest and not voted if there had ever been a budget request for the Treasurer’s Office.

He said the only increase to the Treasurer’s budget was the cost-of-living wage increase that all county employees received, which brought him no “extraordinary” benefit.

“She is not in my direct employ,” Quinton said. “She has been employed in her capacity as Deputy Treasurer for the past ten years.”

As mayor of Prairie City, Hamsher is Camarena’s direct supervisor. Hamsher said he had not spoken to Camarena about his interest in being on the Budget Committee.

Hamsher said that, should Camarena get appointed to the committee, he would not have to recuse himself from discussions on whether the commissioners’ paid hours should be increased.

“I don’t know how that would have any bearing on anything,” he said. “It wouldn’t matter to me if he recused himself or not.”

Hamsher said asking whether Camarena should recuse himself from such a discussion or vote would be questioning his and Camarena’s integrity and suggesting that he would take action toward Camarena based on his decision as a committee member.

He said Camarena voting on whether the commissioners should get paid for more hours does not pose a potential conflict of interest. Hamsher said a conflict of interest would occur if he or a family member were to benefit financially from a decision.

Camarena said he would recuse himself from any discussions or votes that could be perceived as a conflict of interest on anything, including the matter of whether to increase the county commissioners’ number of paid hours.

The county will revisit the Budget Committee appointment in its next session.

An abused boy is saved by a note from a waitress

Trump mostly in seclusion during final days of presidency