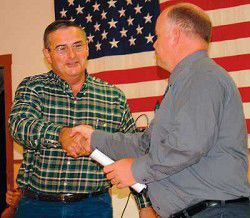 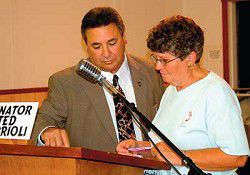 MT. VERNON - The pace was quick, the tone was civil and the cookies were homemade as about a hundred area residents packed the Mt. Vernon Grange last week to question candidates for local and state offices.

The evening proceeded without fireworks, although it did bring out a surprise apology from Sheriff Glenn Palmer to his write-in challenger, Mike Durr, over a letter to the editor written by Sam Palmer.

Palmer said he had gone hunting with his brother, Sam, and "shared some things with him" around the campfire. The sheriff said he didn't see the letter, which was critical of Durr's performance and leadership, until it was published in the Blue Mountain Eagle.

Voters will fill these and other elected positions in the Nov. 4 election. Ballots will be mailed out on Oct. 17.

Both Durr and Palmer outlined their experience as law enforcement officers to stress their qualification for the job.

Durr, a retired Oregon State Police detective and now a warehouse manager for Pepsi, said his goal is to make the sheriff's office a "professional, well-respected law enforcement agency."

Durr said he would focus on investigations, improve morale at the jail and work closely with other agencies such as the OSP.

However, he rejected a concern he had heard in the community that a Durr administration would simply be an extension of the OSP.

Palmer, in his second term as sheriff, said he pledged to run the department in a businesslike fashion and be accountable to the public.

He said the county has seen a rash of violence and crime, and his office has handled cases involving sex abuse, methamphetamines, theft and a major marijuana grow operation.

Palmer said he's tried to save the taxpayers money by cutting extras out of the jail menu and finding grants for search and rescue and patrol equipment.

He said he has worked with numerous agencies - local and across the state - and has sought to work out some highly public differences with the Grant County Court.

"With the County Court, we may not always have seen eye to eye, but the work goes on, things get done ..." he said.

"There isn't an agency that hasn't had a difference with the Court," he said. "We've worked through them and we've moved on."

Asked how the candidates would improve cooperation between the Sheriff's Office and the Court, Durr said it's important for a sheriff to be prepared with a well-timed, well thought-out approach when dealing with the Court.

"If you go in there unprepared, it's just not going to work," he said.

Palmer said he has worked diligently with the Court, and while acknowledging some "rough times," he said "we conduct ourselves in a professional manner."

Durr was asked if he had been pressed by the Court to run.

"I'll make this really simple: No," he said.

The candidates differed somewhat over the jail, when asked if it is an asset or a liability.

"Just about everything we do in law enforcement is a liability," Palmer said. While it's an asset to be able to confine law-breakers, he said, the cost of jail operations is a tax burden.

He called it a "big black hole" that sucks money from the taxpayers.

Durr called the jail a necessity, noting "you've got to have consequences."

"In that respect, it's an asset for our community," Durr said.

Both candidates said they believed in good communications with the public. Palmer said he has an "open door" to the community, and Durr stressed the need for fair and professional dealings with the people.

Asked about community service, Palmer cited activities ranging from a Christmas dinner he and his wife host each year to serving on boards for the Lake Creek Youth Camp and the Grant County Snow Ballers. Durr said he gives blood to the Red Cross, but other volunteerism has been restricted by the demands of his job.

The two were asked to list their top contributors.

For Palmer, the list was Everett Shilts, himself and his wife Roseann, and "a tie" between about 15 other people at the $100 and below level.

In closing remarks, Durr said he wants to be sheriff, despite the long hours and commitment it requires. "Being a policeman is the most rewarding thing you can do," he said. "I want to be a professional policeman that you guys are proud to have as your sheriff."

Palmer said he has the track record, certification and training for the job.

"When I ran for sheriff nine years ago I made a commitment that I would be there for you, and I think I've kept that promise," he said.

Other races also shared the spotlight, although the candidates acknowledged the drawing power of the sheriff's race.

"I know you're just here to to see the sheriff's candidates - Mike and I are just window dressing," joked Huffman.

He told the crowd that since being appointed representative for District 59, he has made an effort to stay in touch with constituents outside The Dalles.

"I went out and bought a Prius," he said.

Huffman also stressed that he gets back to people by phone and e-mail, and constituents can reach him by cell, he noted.

"I am responsive," he said.

As for accomplishments, he said he has helped get cellular service established in Wheeler County and there are plans now to extend that service beyond Fossil.

He also said he worked with Ferrioli to persuade the governor to scrap his recent proposal for state agency pay raises. Huffman also opposes a separate proposal to raise pay for legislators.

Ahern, a businessman, real estate agent and county commissioner in Madras, cited a long history of community involvement that he says is aimed at making "my community a better place."

He said a primary goal for him at the state level would be to focus on economic development for the rural counties he would represent.

"We have a lot of challenges," he said, adding that he is a strong advocate also of schools. "We will not have a strong economy without strong education.

Both candidates said they favor more legislative oversight of government agencies such as Department of Human Services. Huffman said legislative audits would help curb abuses there.

"My goal, and not just for DHS, is to get agencies to understand that we're their customers," he said.

"DHS is always going to be controversial," said Ahern, "But I do thing it can be a better-run agency."

Ferrioli, although unopposed on the November ballot, also fielded a question or two on ballot measures, water issues, and the prospects for better road maintenance on Highway 395 during the winter.

He acknowledged that "if you drive up 395 and over Battle Mountain, you're taking your life in your hands."

He said he's asked for an audit to see whether state highway crews are doing as much sanding and maintenance as in the past.

"I think we're saving a lot of money in Eastern Oregon and spending it somewhere else," Ferrioli said.

Candidates also said the state should be using more water from the Columbia River for agriculture - before other states stake their claims.

Readers can check out more of the candidate event in a Blue Mountain Eagle video. Go to www.myeaglenews.com.