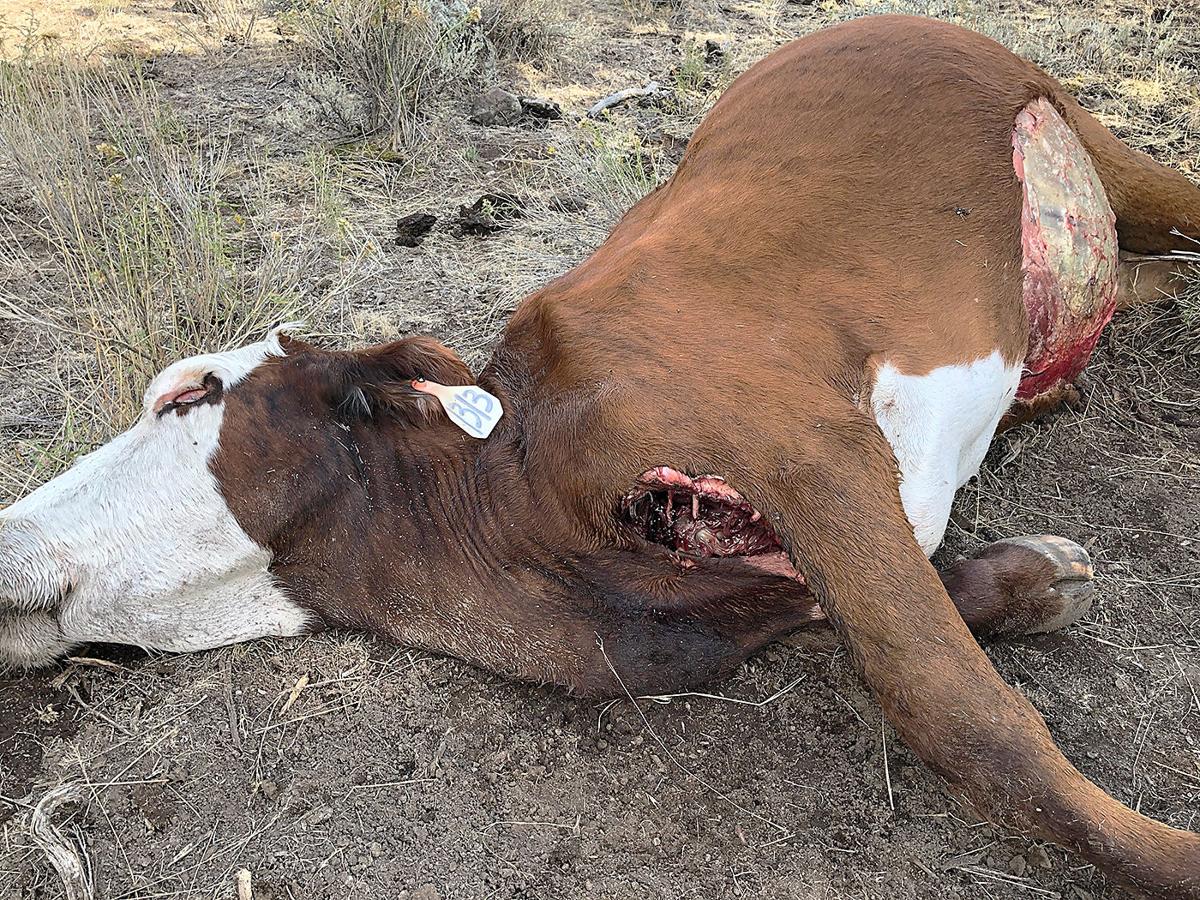 A cow was found dead and mutilated in early 2020 at Bar DR Land and Cattle, a Deschutes County ranch in Hampton. 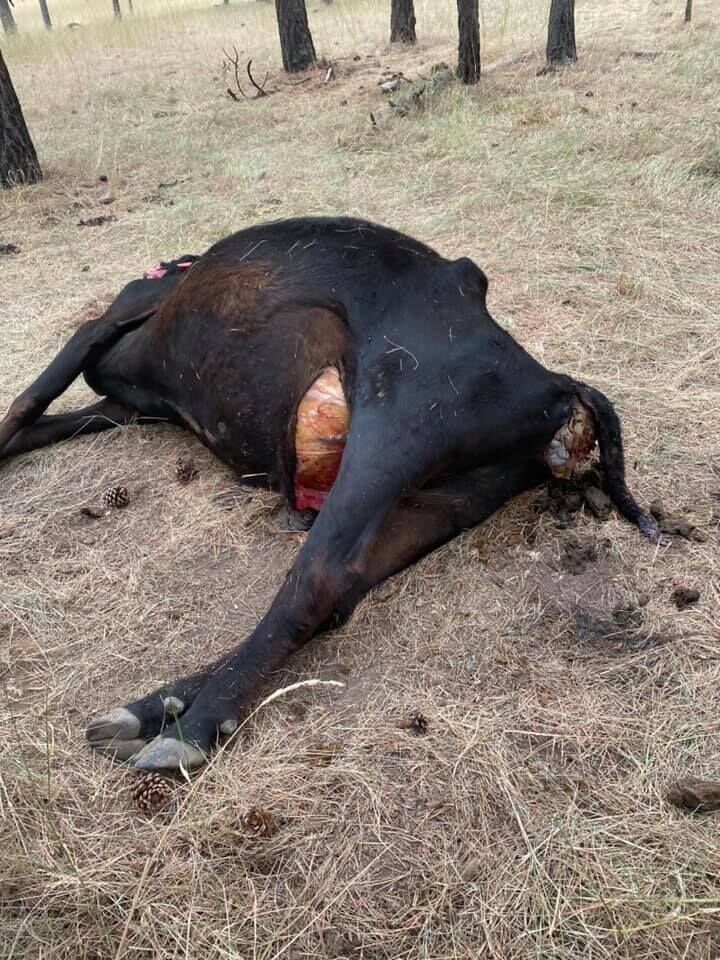 A photo posted to Fee Stubblefield’s Facebook page on Saturday, Sept. 12, 2020, shows the mutilated cow he found near Dixie Ranch Road outside of Ukiah earlier that day. 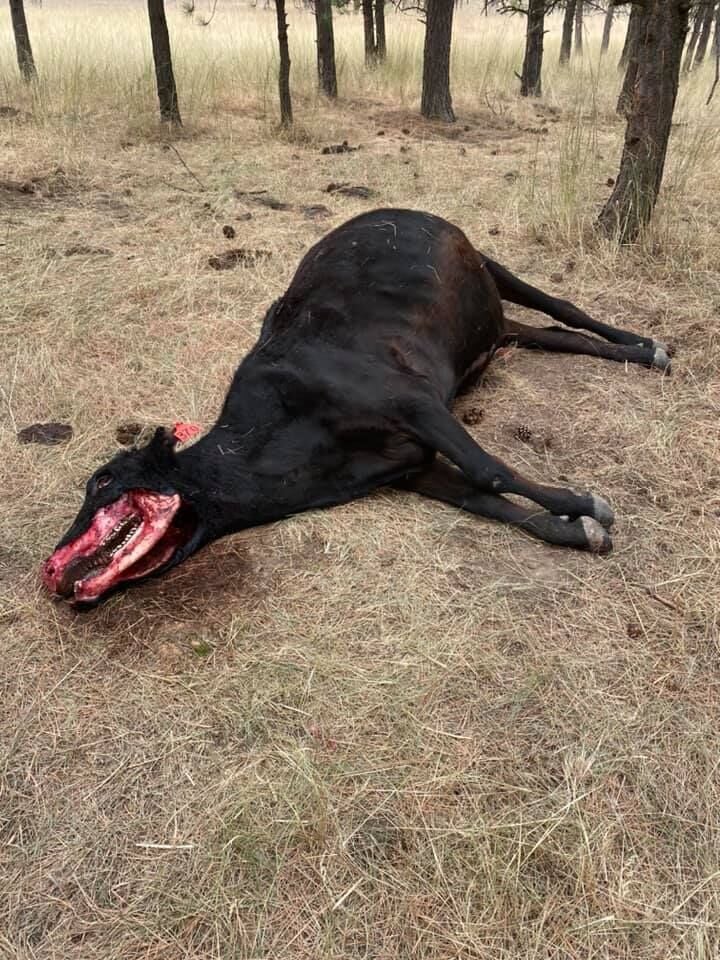 Photos posted to Fee Stubblefield’s Facebook page on Saturday, Sept. 12, show the mutilated cow he found near Dixie Ranch Road outside of Ukiah earlier that day. 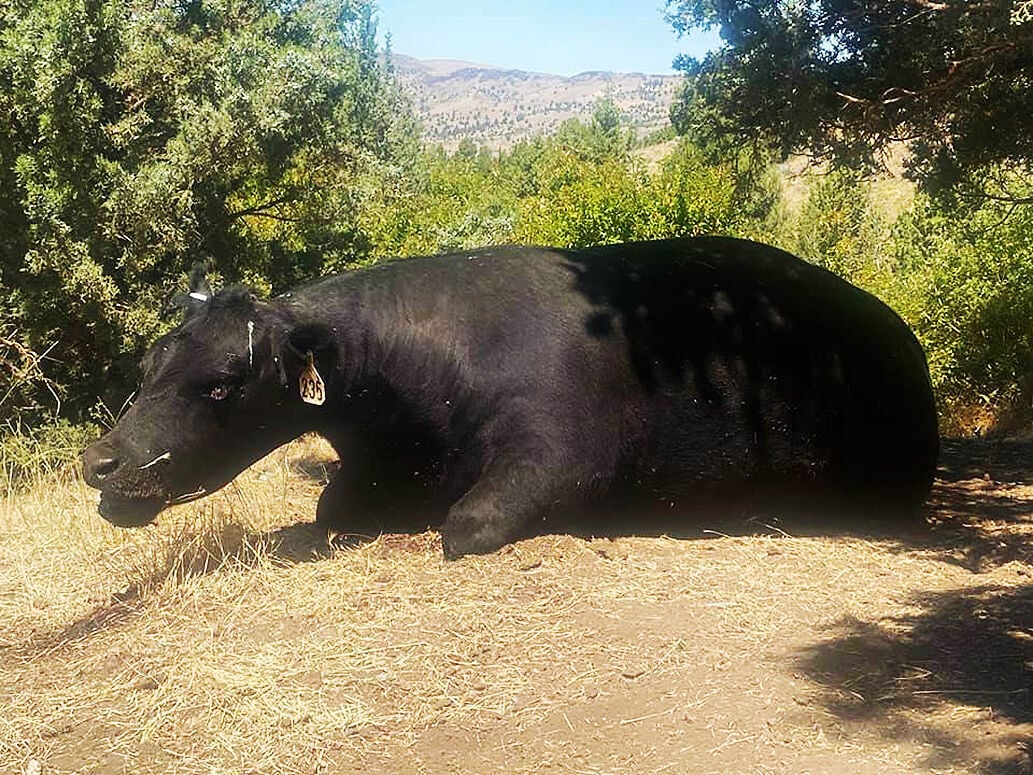 Rancher David Hunt found a cow dead and mutilated in July, with her tongue, genitals and reproductive organs cut out — and she was placed in an upright position. 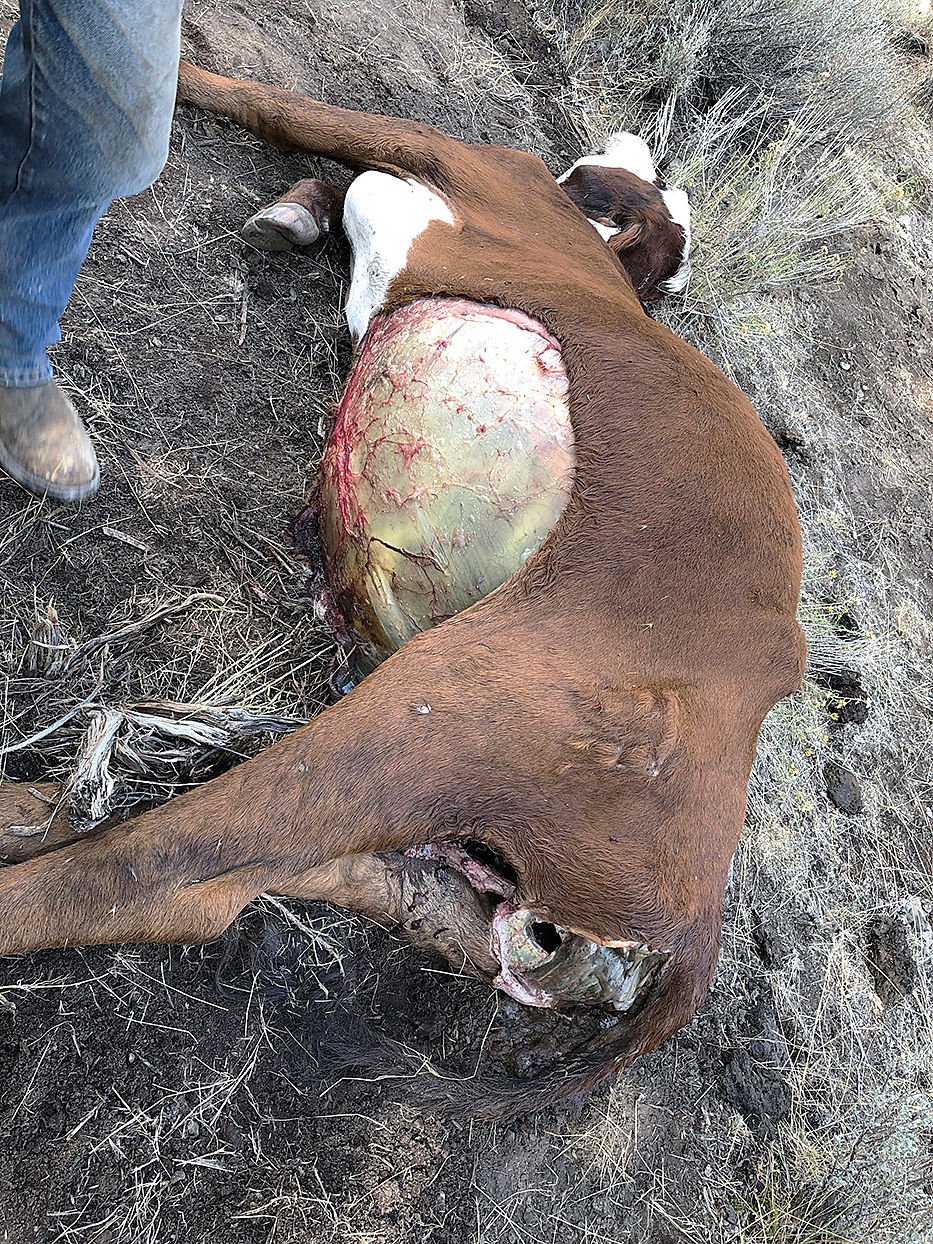 A cow was found dead and mutilated at Bar DR Land and Cattle, a Deschutes County ranch in Hampton. 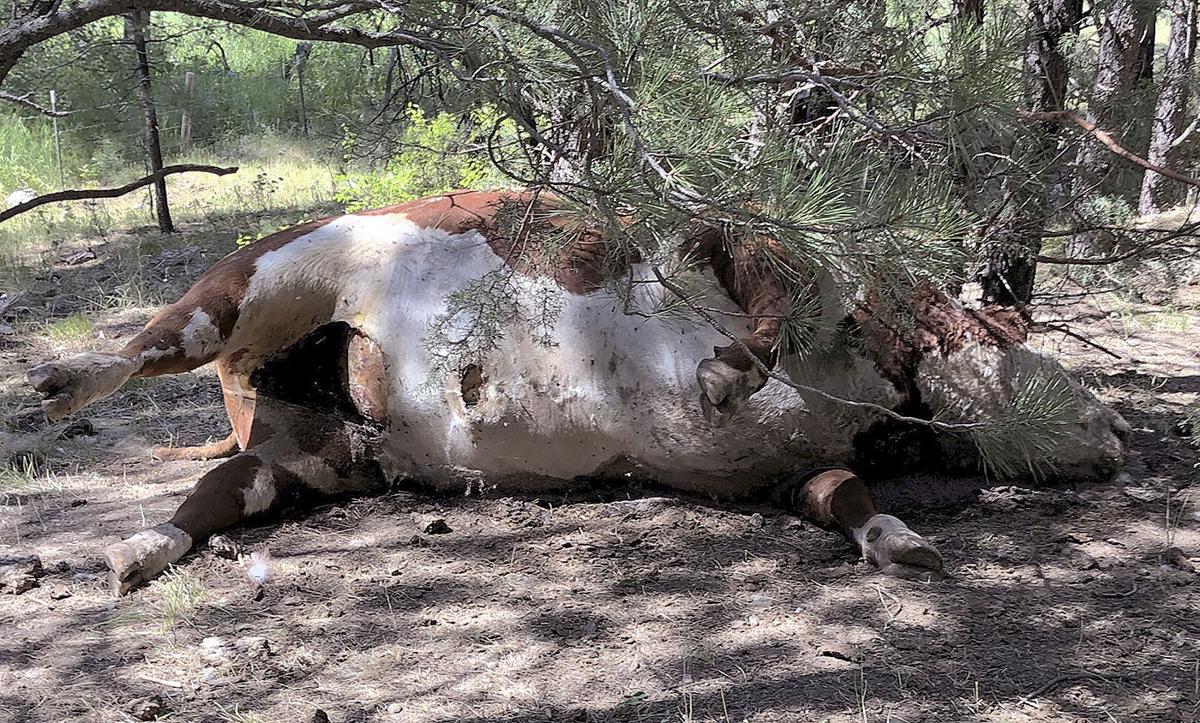 One of the five mutilated bulls discovered July 31, 2019, in the Malheur National Forest about 20 miles north of Burns.

A cow was found dead and mutilated in early 2020 at Bar DR Land and Cattle, a Deschutes County ranch in Hampton.

A photo posted to Fee Stubblefield’s Facebook page on Saturday, Sept. 12, 2020, shows the mutilated cow he found near Dixie Ranch Road outside of Ukiah earlier that day.

Photos posted to Fee Stubblefield’s Facebook page on Saturday, Sept. 12, show the mutilated cow he found near Dixie Ranch Road outside of Ukiah earlier that day.

Rancher David Hunt found a cow dead and mutilated in July, with her tongue, genitals and reproductive organs cut out — and she was placed in an upright position.

A cow was found dead and mutilated at Bar DR Land and Cattle, a Deschutes County ranch in Hampton.

One of the five mutilated bulls discovered July 31, 2019, in the Malheur National Forest about 20 miles north of Burns.

The udders appeared to have been removed with precision — straight, even cuts, as if made by a sharp object.

The reproductive systems had been cut out cleanly as well, and without disturbing other organs.

There was no indication of predator activity, and perhaps strangest of all, scavenging animals appeared to have hardly touched these six cow carcasses found in a seven-day span this year on ranchland in rural Crook County.

Detectives with the Crook County Sheriff’s Office, longtime ranchers and a Prineville veterinarian who reviewed evidence from an ongoing case say they’re stumped by the “unnatural” deaths.

But the mutilated cattle might be more ordinary than they seem, according to Brian Dunning, a Bend-based podcaster committed to deflating wild claims.

“This reads like a very typical case,” he said.

Crook County Sheriff John Gautney said his office has no leads but cautioned there’s “no reason to panic.”

“We’ve had cases like this over the years,” Gautney said. “They seem to come in groups and then go away. We are not speculating on how these are happening, as we try to keep an open mind and look at all possibilities.”

Mutilated cattle have been reported in the American West since at least the 1960s. There have been multiple recent cases of bull mutilations in Harney, Wheeler and Umatilla counties in Eastern Oregon. But now, beef cattle have turned up dead in the remote ranchlands outside Prineville bearing signs common to the cattle mutilation phenomenon.

The current string of cases began Feb. 27, when Crook County Sheriff’s Office Deputy Scott Durr was dispatched to suspicious circumstances at the 96 Ranch on Southeast Van Lake Road. Owner Rickey Shannon said one of his herd had been discovered dead two days earlier with an odd cut down its spine.

Shannon, who lives on the ranch with his two sons, reported no predators or birds had touched the cow. There were no tracks, and no blood surrounding it. The cow’s left cheek, tongue and three of its teats had been cut away cleanly. But the eyes, usually the first body part to be scavenged after death, were untouched. There were no bullet holes, and a scan of the cow by a metal detector turned up none.

The cow was about 200 yards from the road, near the edge of a field and some juniper trees. There were no vehicle tracks near the dead animal, no footprints of any kind.

The mystery deepened a few days later. On March 4, Casey Thomas, manager of the GI Ranch on Lister Road in Paulina, reported that one of his herd of around 5,000 appeared to have suffered a strange death.

Crook County detective Javier Sanchez arrived to find a deceased Black Angus cow lying on its side. Hair had been removed near the stomach. All four teats were cut off and its left cheek, tongue and sex organs removed. Between the front legs an uneven patch of hair was missing and in the middle was a prick mark, Sanchez wrote in his report.

The next day, Crook County Sgt. Timothy Durheim was dispatched to a report of a wolf kill at the McCormack Ranch on Southeast Bear Creek Road. But it was apparent no wolf took down this cow.

Durheim noted several straight incisions on the animal. The udder had been removed and a circular cut was made around the anus and the reproductive organs removed without puncturing the gut. The left cheek, left eye and tongue had been removed.

“Again, I noted straight, clean incisions where the cheek had been,” Durheim wrote in his case report.

Durheim examined the carcass and found a puncture wound between the neck and shoulder. He found no bite marks.

On March 6, Casey Thomas called police back to report finding another dead cow bearing the same strange injuries. This one was more badly decomposed than the first, but its left cheek was also removed and a 2-inch patch had been cut into the hair on its neck.

Detectives took photos of the dead cows to Prineville veterinarian Taylor Karlin for her perspective. She agreed the deaths appeared unnatural, and her opinion was included in a search warrant request filed in the case to scan for cellphone activity near where the cows were found.

Charges in any of the cases could include trespassing and aggravated animal abuse. With the cattle valued at $1,250 to $1,400 each, criminal mischief might also be charged.

As a vet with an interest in large animals, Karlin has performed many postmortem examinations on deceased livestock. When, and if, another mutilated cow turns up in Crook County, Karlin has agreed to perform an appropriate necropsy so she can personally examine a fresh specimen.

One possible explanation is these were, in fact, natural deaths

“This is almost certainly the same kind of bird predation we’ve seen in so many similar cases,” he wrote. “In my opinion, there is nothing here that suggests anything but normal and expected bird predation had occurred, and ... no justification for a search warrant to seek out an apocryphal human responsible for the wounds.”

Dunning said he’s learned there’s actually a short window of time between when the animal dies and when its body is scavenged when it’s obvious what killed the animal.

“Most particularly birds, and also some insects, will always go first for the exposed soft tissue: eyes, tongue, lips and mouth area, genitals. The animal is dead with zero blood pressure so there is never significant bleeding from postmortem wounds. The body is in the process of drying and decaying, so skin pulls tight from around the excised area, giving the impression of a perfect surgical cut.”

Karlin is awaiting the results of liver and blood samples she’s sent away for lab testing. Police have sent hair samples to the state crime lab on the chance they don’t belong to the bovine.

Last year, the FBI in Oregon started receiving questions about cattle mutilations in Central and Eastern Oregon, according to Beth Anne Steele, spokesperson for the FBI Portland office. But despite sporadic media inquiries, the office does not have a current role in the cattle mutilation investigations, Steele wrote.

Another cow was found dead in a disturbing condition in Eastern Oregon Sept. 29 and is being investigated by the Oregon State Police.

Why the GOP has false beef with Biden's climate plan