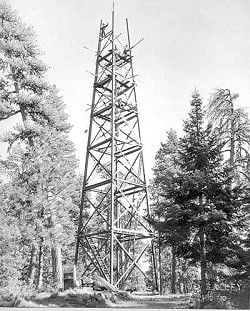 It was the mid-1930s, and the nation remained mired in the Great Depression, nearly a decade of hard-scrabble times that began with the stock market crash of 1929.

In Grant County, news reports noted that the unemployment count swelled to include some 500 bread-winners, and neighbors shared their home-grown produce with families in the greatest need. The county agent, the government's representative in the rural areas, teamed up with the American Red Cross to distribute food and cloth for warm winter clothing to the most desperate residents.

The more fortunate inhabitants still had some cash to spend. According to newspapers of the day, Grant County residents could get their hats blocked at John Day Cleaners for 75 cents, or spend the princely sum of $3.65 to buy a full-length sheep-lined coat at Knox's. They could go to movies in Seneca, Prairie City or John Day, and enjoy the dances at the fraternal hall in Canyon City.

Against that backdrop of resilience in the face of hard times, one of the nation's most innovative economic restoration programs came to the region.

The Civilian Conservation Corps, formed as part of President Franklin Roosevelt's "New Deal," recruited unemployed young men as sort of a peacetime army - with a mission to restore and renew the nation's natural resources.

The CCC is credited with planting some 3 billion trees from 1933 to 1942 - an effort that grew out of dismay at the devastation in the Dust Bowl states. In Oregon, the legacy may be more evident today in the buildings, lookouts and roads they built.

CCC recruits had to be unmarried, physically fit and between the age of 18 and 26, although the age limits were stretched for war veterans. For their labor, they got $30 a month - most of which went back home to their families.

Many came from the industrial cities of the east, but the projects were largely in the West.

In Grant County, news reports indicate the CCC was awaited with great anticipation. The May 10, 1935, Blue Mountain Eagle notes the progress on the camp site.

"The buildings at the Canyon Creek CCC camp are rapidly nearing completion for the 207 boys who are expected to be here on the 15th of this month. In addition to the 25 boys who have been assisting with the construction work, 30 more arrived yesterday. Lieutenant Hall is in charge of the camp at present," the paper reported.

According to a company history, the company was formed in New York in 1933 and worked on projects in the east before shifting to Canyon City.

"At Canyon Creek ... the boys from the east found themselves in the Malheur National forest, the greatest white pine forest in the world," the document notes.

The company's 1940 yearbook details the accomplishments of "the boys."

"The Idlewild Picnic Camp was constructed by CCC enrollees, and the Wickiup Camp, plus 14 other camps that have been maintained by enrollee labor."

Photos from the era documented their accomplishments: an amphitheater and picnic tables at Wickiup Campground, the Starr Ridge Ski Cabin, and Frazier Lookout.

Among the major accomplishments was the Government Hill complex - buildings, stairway, curbing and landscaping - in John Day. The land for the compound was leveled on the site of the abandoned Humbolt Gold Mine.

While they accomplished all these feats, "the boys" lived in military style barracks and developed the camraderie of active-duty troops.

A handbook cautioned recruits not to expect private rooms or special treatment:

"A CCC man ... lives with 200 other men of his own age, in barracks. They work, play and eat together. Learning to get along with 199 other men without hurt feelings or broken noses is one thing every enrollee must learn while in camp...

"Boys who 'can take it' will get much out of the CCC. They may well be proud to be part of such an organization."

The 1940 annual for Camp Canyon Creek, preserved in the Malheur National Forest archives, chronicles camp life, with photos of the craft and carpentry shop, the educational building reading room, and "Hotel New Yorker" - or Barrack Four, as well as unit photos and pictures of the work parties.

The camraderie comes through in a light-hearted list of enrollees who were recognized for their personal traits with humorous nicknames: softest spoken, night clubber, frontiersman, little guy, Ipana smile, prodigal son and Major Hoople's protege.

While its activities in Grant County and across the nation drew acclaim, the CCC never achieved the permanent status that Roosevelt envisioned for it. In 1939, the nation began to see a resurgence in jobs, and enrollment dwindled over the next couple of years. Meanwhile, the international situation - with war brewing in Europe - increasingly drew the attention of leaders in Washington, D.C.

After Pearl Harbor in 1941, the funding dissipated for programs not directly linked to the war effort, and a Congressional committee recommended that the CCC be abolished in 1942.

Internet rejoices as dogs return to the White House