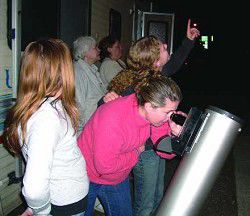 Left to right: Mesa Rader, Doreen Dobyns and Sierra Rader (pointing up), all of Mt. Vernon, take turns looking through the Dobsonian telescope. The Eagle/Angel Carpenter 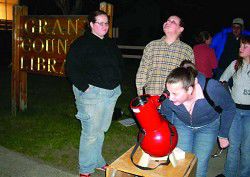 Left to right: Donna, Nahum and Shaoon Baughman use the library's new Astroscan telescope during the event at the Grant County Library last week. The Eagle/Angel Carpenter

Left to right: Mesa Rader, Doreen Dobyns and Sierra Rader (pointing up), all of Mt. Vernon, take turns looking through the Dobsonian telescope. The Eagle/Angel Carpenter

Left to right: Donna, Nahum and Shaoon Baughman use the library's new Astroscan telescope during the event at the Grant County Library last week. The Eagle/Angel Carpenter

JOHN DAY - A perfectly clear night sky wasn't to be for 20 local stargazers at the Grant County Library on April 25.

However, for their patience the group was rewarded when the clouds parted, offering a fine view of the moon, Mars and Venus through astronomy expert Bob Duke's telescope and binoculars.

A columnist for The Oregonian, Duke traveled from Portland to give the presentation, which was made possible by funding given to Libraries of Eastern Oregon (LEO) from NASA. He's given nearly four dozen such presentations in Eastern Oregon communities.

In the free presentation, Duke displayed four telescopes in the library and taught about their origin and qualities to seek when purchasing a telescope. The top two on the list: a lens with a wide diameter, try 5 or 6 inches, and a steady mount - you won't be able to see much with a wobbling scope.

One of the telescopes demonstrated by Duke, the Astroscan, was recently acquired by the library through grants obtained by LEO. The cherry red instrument will be available for checkout with certain conditions.

For those wanting to purchase their own telescope, Duke recommended the Dobsonian, one of the most economical on the market, he said. Binoculars are good for their wider field of view, he said, you just can't see the rings of Saturn with them.

The conversation turned to the enjoyment one can find in owning a telescope.

Duke recalled an exciting night when he and a friend found something new near Saturn. They didn't report it, however, and three days later their discovery was reported in the newspaper by someone else.

Duke's family has a yearly tradition of getting lawn chairs out around Aug. 12 and 13 to watch the Persied meteor shower.

"It's a popular one," he said, "because it's steady and puts on a show." The nice weather is another bonus.

Before heading outside, Duke answered a few questions.

Esther Dew of Prairie City asked, "Who do you call if a fireball looks like it's going to hit Dixie or Strawberry (Mountain)?"

Dew said she's seen three in about as many years from her living-room easy chair.

Along with the Duke's Dobsonian, the Astroscan was set up outside the library, and all who waited for the clouds to float by caught a clear glimpse of a beautiful half moon.

Astroscans were also given to Mt. Vernon Middle School and Seneca School through LEO.

Fire victims get first look at homes destroyed by wildfires