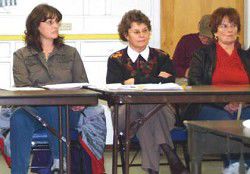 <I>The Eagle/Luke Johnson</I><BR>Left to right: Carol Waggoner, Julie Reynolds, and Verna Adams listen to the response from the fair board about the proposed split by the 4-H and FFA, Dec. 4 at Keerins Hall. 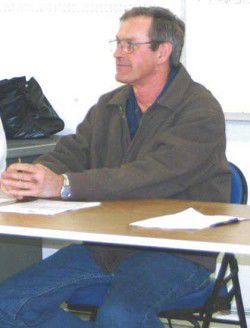 <I>The Eagle/Luke Johnson</I><BR>Grant County Fair Board chairman Larry Pierce listens to a proposal from the 4-H and FFA to split the fair into two events, Dec. 4 at Keerins Hall.

<I>The Eagle/Luke Johnson</I><BR>Left to right: Carol Waggoner, Julie Reynolds, and Verna Adams listen to the response from the fair board about the proposed split by the 4-H and FFA, Dec. 4 at Keerins Hall.

<I>The Eagle/Luke Johnson</I><BR>Grant County Fair Board chairman Larry Pierce listens to a proposal from the 4-H and FFA to split the fair into two events, Dec. 4 at Keerins Hall.

JOHN DAY - The atmosphere in Keerins Hall between representatives of the 4-H and the Grant County Fair Board was one of frustration Monday night. Two sides in an issue each presented a solid case for differing viewpoints, and the result was a gap that seemed impossible to breach.

The 4-H committee, represented by Carol Waggoner and Julie Reynolds, laid out a proposal to members of the Grant County Fair Board. The proposal was for a separate fair to be held two weeks prior to the main fair for the purpose of allowing the 4-H kids to show their animals before the school year started and still leave enough time for practicing fall sports.

"We're not saying your hearts aren't in the right place," said Carol Waggoner as she addressed the fair board, "we just feel that the 4-H wasn't consulted when the date was set. The kids in sports are doing daily doubles and with the added pressure of getting ready for the fair it just puts too much pressure on them."

The fair board listened to the concerns from various members of the crowd who represented the 4-H and the FFA, and also to the proposed change of venue from them.

The change would split the 4-H from the fair and create an opportunity for the kids to show their livestock entries by moving it from the fourth week in August to the second week in August.

The board members were all very concerned with the move citing various reasons including, loss of revenue and sponsors, and loss of support from the community.

This change would be coming on the heels of a very successful 2006 fair year in which total revenue was up approximately $13,000 from the previous year and the livestock auction earned approximatley $21,000 more than the previous year. The fair board members worry that the effects of splitting the two events could long term financial consequences just when the program appears headed in the right direction.

The reasons for their skepticism hinged on the ability of the community and sponsors to financially support and attend two separate events on a budget that is extremely tight already.

According to board members, the Grant County Fair cannot be moved forward to accommodate the 4-H and the FFA because the livestock contractor for the rodeo and the contractor for the carnival have already been obtained for the fourth week in August. Both of these contractors would be unwilling to change dates because of previous events and might be reluctant to do business with the county in the future.

The fair board spent much of the evening trying to convince the 4-H to remain with the Fair for this year and work out a solution for the next year.

"I can't think of one thing that we can remove and still have a quality fair," said Larry Pierce, chairman of the Fair Board. "A move like this could be disastrous for both parties involved."

John Morris also agreed with Pierce's assessment of the situation.

"In the past we have moved the date, and moved it again," said Morris, "and the result has never made everyone happy. If we split the fair up, we'll both be in trouble. A house divided cannot stand."

The 4-H and the FFA in turn, spent much of the evening discussing the effects of that hectic week would have on the children involved. Some of those most impacted would be families that live in the outlying areas of Grant County. These young people could end up driving many miles after physically exhausting sports schedules just to compete in various livestock events.

The 4-H representatives said they were prepared to pay for the facility rental and other costs neccessary for putting on a separate fair.

Another issue was the Oregon State Fair. Those who show their livestock or exhibits here in Grant County, would miss the opportunity to compete at the next level during the state fair if the current schedule is maintained since the Oregon State Fair falls on the same week.

For three hours, the two sides wrangled over the issues and in the end were unable to come to an immediate solution. The two sides agreed to form a committee from members representing both viewpoints and try to resolve the issue at a later date.