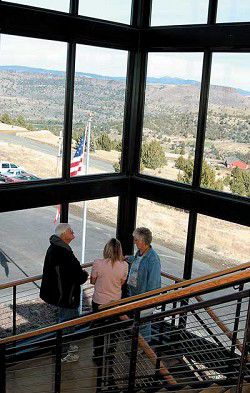 <I>The Eagle/Scotta Callister</I><BR>Even from the second-floor of the stairwell, visitors to the new airport terminal can get a bird's-eye view of the valley. The new building also features seating on the third-floor observation deck and a comfortable fireplace seating area on the main floor, as well as meeting and kitchen space for events.

<I>The Eagle/Scotta Callister</I><BR>Even from the second-floor of the stairwell, visitors to the new airport terminal can get a bird's-eye view of the valley. The new building also features seating on the third-floor observation deck and a comfortable fireplace seating area on the main floor, as well as meeting and kitchen space for events.

He admits to a passion about the building and what it means, not just for the local community but for the region.

"The airport is our on-ramp and off-ramp onto the national highway - in the air," he said last week at a celebration and ribbon-cutting for the new airport terminal.

Completed in September, the joint-use building houses the U.S. Forest Service fire base and training facilities, the county's airport operations, a pilot lounge, and community meeting space. A third-story observation deck, open to the public and equipped with comfortable chairs, offers commanding views of the John Day Valley and surrounding mountains.

The Oct. 12 grand opening drew a host of state, federal and local government officials, as well as representatives of several companies that worked on the project.

Welcoming the crowd, English noted that the airport provides a needed link to medical services and supports business and tourism in the area. It also is an access point for people from outside the region "to come and enjoy what we take for granted."

"From here you can go anywhere - and from anywhere, you can come here," he said.

State Rep. John Huffman noted the significant state support through ConnectOregon I and II funding in the airport improvement projects. He lauded the end result.

"I've been in on the meetings in the old terminal, and this is much better," he quipped.

Rainse Anderson, an engineer and the project manager for WHPacific, noted not just the new terminal building, but also other recently completed work at the airfield, including runway extensions and taxiway improvements.

All told, he said, some $7.5 million has been invested in the airport.

"That's just tremendous for this community," he said.

He also touted the energy efficiency of the building, which was designed to achieve Leadership in Energy and Environmental Design (LEED) Silver certification.

Among the energy-saving features: low-flow plumbing fixtures, recycled content in 10 percent of the building materials, recycling of the bulk of the construction debris, reliance on daylight as a lighting source, and an overnight air purge system for cooling efficiency.

The building also boasts a wood pellet boiler system, which promises low-cost heating and cooling for the airport.

Doug Gochnour, Malheur National Forest (MNF) supervisor, cited other benefits as well, noting that the airport will be a significant customer for the new pellet plant nearing completion at Malheur Lumber Company in John Day. That dovetails with the Forest Service's efforts to clean up the overgrown forests, he said.

"It's really a cool partnership," he said.

Gochnour applauded all those who worked toward completion of the building and credited the early work done by his predecessor at the MNF, Stan Benes, and Gary Judd, English's predecessor as airport manager. They pursued the idea in talks with Grant County Judge Mark Webb and the County Court, and "it worked out well."

The Forest Service put some $800,000 into the building, which is the new home for the fire base and regional rappeller training academy.

US cases surge as Trump claims the pandemic is 'handled'