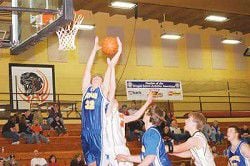 <I>The Eagle/David Heldreth</I><BR>Prairie City's Tel Winegar goes up for a rebound against Cove's Martins Smalkais during the Jan. 3 game. The Panthers lost 71-54 to the Leopards. 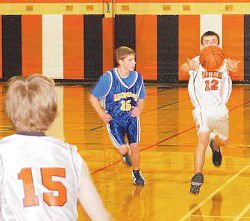 <I>The Eagle/David Heldreth</I><BR>Prairie City's Tel Winegar goes up for a rebound against Cove's Martins Smalkais during the Jan. 3 game. The Panthers lost 71-54 to the Leopards.

The Prairie City boys basketball team fell 71-54 to Cove Saturday, Jan. 3. The Panthers went up 21-9 in the first quarter and held off the Leopards to keep a 51-46 going into halftime. However, Prairie City slowed in the second quarter, and Cove closed the gap by eight points.

Senior Brandon Crisler, one of Prairie City's leading scorers, was forced to spend a great deal of the game on the bench due to foul trouble. Marshall Meacham left the game with an injured ankle in the first half and didn't return. The injury, foul trouble and absence of senior Colton Schulze, who was away on vacation, caused problems for the Panthers.

Meacham and Crisler each ended the game with eight points, despite their limited playing time.

"Brandon was out of the game in the second and third quarters," Prairie City coach Ryan Gerry said. "We gave up a lot of second-chance points and put backs with him out. We were kind of out of whack. We couldn't get back into our offense like we did in the first half. We were definitely missing Colton Schulze."

Cove continued to attack late in the game and outscored Prairie City 45-24 in the second half.

The Leopards and Panthers both were in the Elgin Tournament Monday and Tuesday, Dec. 29-30. The teams never met during the tournament.

Prairie City has an overall record of 5-7 and a 2-2 record in the High Desert League.

"The Monument/Dayville game should be good for us," Gerry said. "It's been tough over Christmas break. The kids don't think they need to practice every day over the break, but it'll be nice to get back to the routine of school and practice."

'This is like my new job': Inside the struggle to get a Covid-19 vaccine