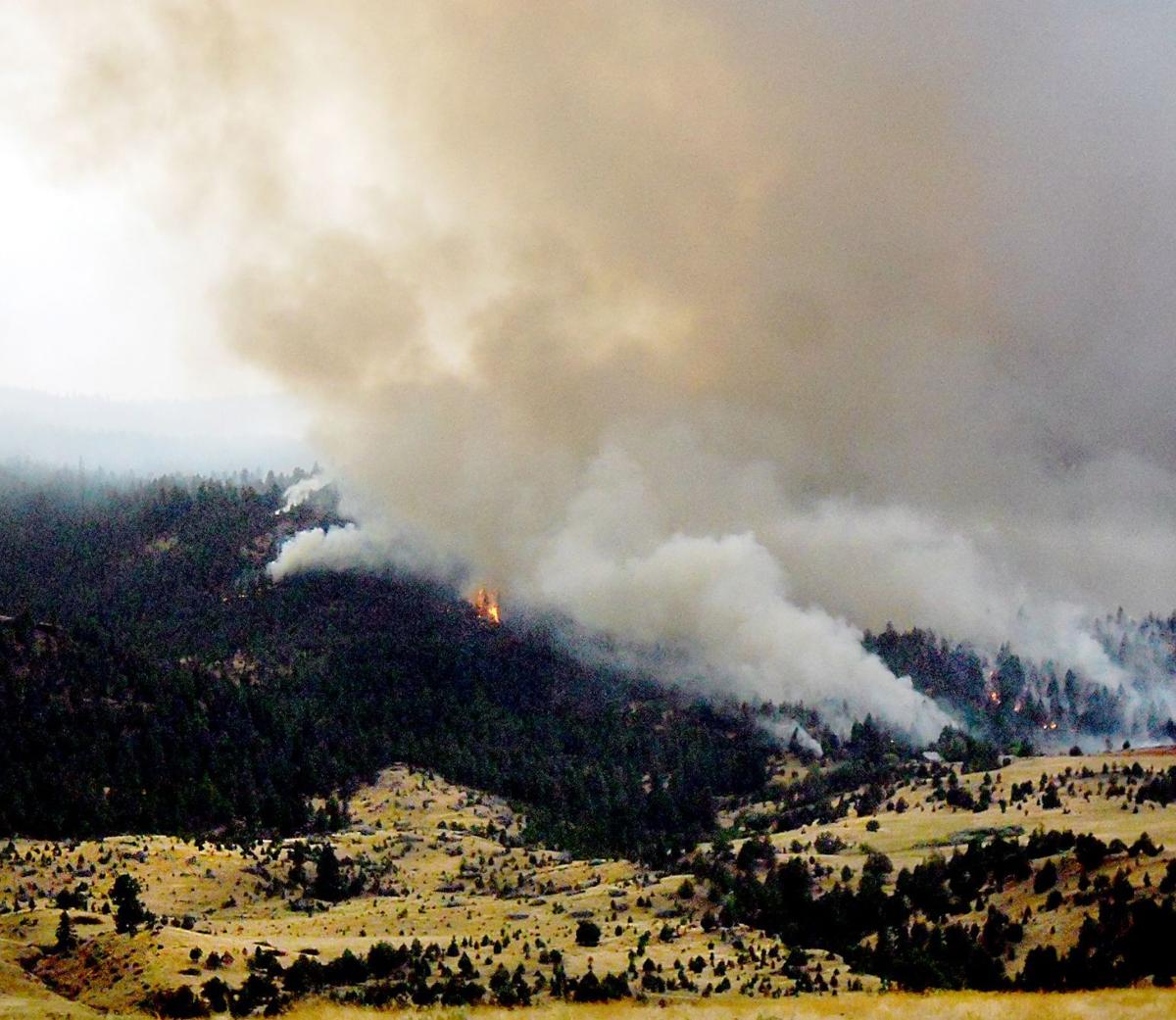 Trees torch as the Lost Hubcap Fire grew last the weekend. Aided by rain and cooler temperatures, crews were able to line the fire and hit hot spots to stop its spread. 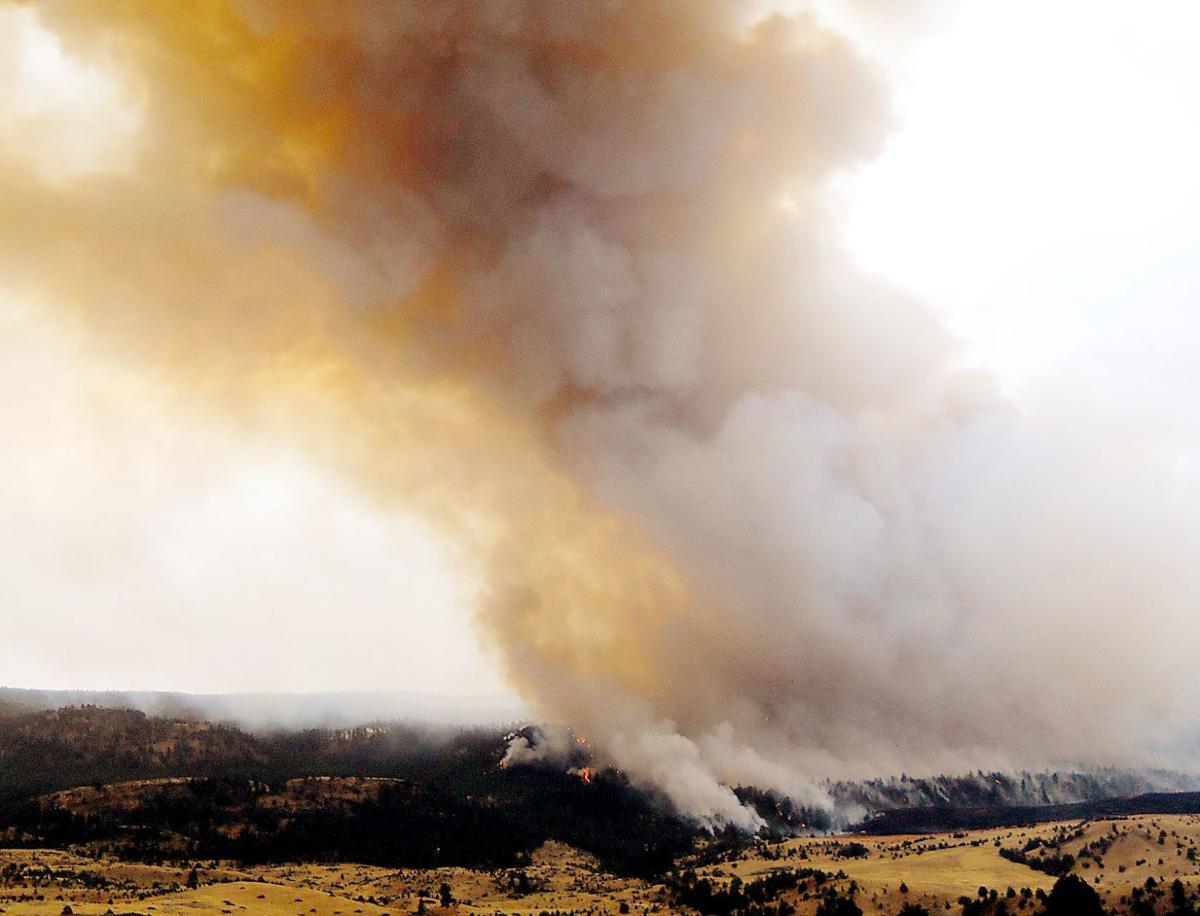 Smoke billows from the Lost Hubcap Fire over the weekend.

Trees torch as the Lost Hubcap Fire grew last the weekend. Aided by rain and cooler temperatures, crews were able to line the fire and hit hot spots to stop its spread.

Smoke billows from the Lost Hubcap Fire over the weekend.

MONUMENT – The Labor Day weekend was no holiday for local and state firefighters, as they mobilized to battle a fast-moving wildfire in the canyons southwest of Monument.

An Oregon Department of Forestry Type 2 team called in to fight the Lost Hubcap Fire reported the blaze was 40 percent contained this Tuesday.

At the Tuesday morning fire briefing, fire behavior analyst Dennis Parelli warned the crews to expect a cold front bearing gusty winds, starting in the afternoon and continuing into the night.

“These winds without any moisture will test the firelines,” he said. “If an ember crosses the fireline, expect spotting up to half a mile.”

A fire team spokesman said the “wind event” could add a day or two to the efforts to contain the fire and turn it over to the local ODF unit, earlier projected at mid-week. The team now expects to do that Thursday or Friday, depending on conditions.

The fire size is mapped at 2,984 acres, and the cause is under investigation. More than 600 people are working the fire, with 19 engines, five dozers, nine water tenders, and six helicopters.

The estimated cost of fighting the fire was $1.71 million as of Tuesday, ODF reported.

As the fire blew up, firefighters from throughout the county turned out to assist the ODF response. Fire departments from John Day, Mt. Vernon, Canyon City, Long Creek, Prairie City and Monument sent crews to help in the initial attack.

In the early response, ODF had two heavy air tankers, four single-engine air tankers, and one helicopter fighting the fire, along with six fire engines, four bulldozers, and district hand crews. Additional resources from the South Fork Complex assisted, with the local departments protecting residences threatened by the wind-driven fire.

With the rapid spread of the fire, Pentzer called for theType 2 team to take over management of the operation Saturday.

By Saturday afternoon, the fire had grown to 2,984 acres and was reported to be torching through pine and fir stands in canyon country.

Then an unusually wet thunderstorm moved into the region that evening, dropping up to a half an inch of rain on the fire. The effect on the fire was “fantastic,” reported Incident Commander Chris Cline, from the command post set up in Long Creek.

“The fire fell to the ground and we are seeing only smoldering conditions now,” he said in a briefing Sunday morning.

The rain helped dampen the lighter fuels, but didn’t extinguish the fire. As the day warmed up, the fire picked up again, but not to the intensity seen on Friday.

Hand and dozer crews worked Sunday and Monday on building and clearing more than 14 miles of fire line around the blaze.

They also began mopping up on the east side, digging out hot spots and falling snags, on Labor Day.

Two temporary closures – County Road 7 and Cottonwood Road, both at the junction of Highway 402 – were set for fire traffic safety, but property owners were allowed to access their property.

The fire burned largely on private lands protected by the Oregon Department of Forestry, but also hit some Bureau of Land Management acreage.

Father of NC suspect in Capitol riot: Charges ‘blown out of proportion’