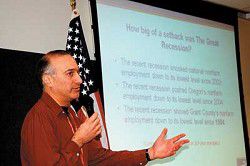 <I>The Eagle/Scotta Callister</I><BR>Residents pack the hall at the Forest Service headquarters in John Day to hear a variety of speakers talk about economic issues and opportunities.

<I>The Eagle/Scotta Callister</I><BR>Residents pack the hall at the Forest Service headquarters in John Day to hear a variety of speakers talk about economic issues and opportunities.

JOHN DAY - Residents came away from last week's Economic Summit II with pages of notes, an array of ideas to mull and, for some, new contacts for own their business networks.

The Feb. 18 meeting drew about 130 people to the Forest Service conference room.

"The turnout showed a determination to locally tackle our current economic troubles," noted Les Zaitz, chairman of the Grant County Economic Council, which hosted the event. "These are talented county people ready to make good things happen - working together, one step at a time."

"We need to see what's already in the shop, what's down in the barn, and see what we can do with what we have," he said.

Some attendees came away with the same sense that Grant County must chart its own future.

Mytchell Mead, a member of the Economic Council, said that the group's goal is to help maintain the community, build on its assets and overcome obstacles.

He urged the group to look for ways to draw on the diverse talents in the local population. Building a sustainable community starts with "owning it - It has to come from inside," he said.

The four-hour event began with what Zaitz called a "university of Grant County" - a series of speakers offering brief updates on the status of various economic sectors - agriculture, forestry and forest products, and tourism. The latter was the focus of several breakout sessions, which also offered tips on starting, growing and marketing a business.

Sharon Mogg, executive director of the Grant County Chamber of Commerce, told the crowd that tourism is "a bright spot locally" - particularly in the current economy. She said the recession has people looking for good values, good deals and ways to economize as they vacation.

In addition, she said, "we have what others crave." That includes scenery, wide-open spaces, an escape from urban settings and "emotion-evoking surroundings."

Mogg said Grant County uses a relatively conservative economic multiplier - a factor to account for the ripple effect of spending - of $2.5 for every $1 dollar of direct spending in tourism.

Looking at spending since the first Economic Summit in October 2008, she said the multipler reveals a $4 million economic impact from tourism in the county.

She said that reduces the impact of those tourism dollars by as much as 30 percent. The solution is to shop locally "and invest in your community," she added.

Mogg cited several underdeveloped tourism niches: ag tourism, culinary tourism, birding and geogaching. And she noted that one person can make a difference, citing the efforts of local cyclist Mike Cosgrove, who started a bike repair coop that caters to touring cyclists.

She also credited Brian Gardner for his work developing the Chamber website. "He has given us visibility globally," she said.

Both Mogg and Leslie Carnes, executive director of the Pendleton Chamber of Commerce, noted the importance of word of mouth - of "telling your story."

"Nobody can tell your stories the way you can," Carnes said. "You know where the treasures are."

Carnes noted that she collected several "stories" of Grant County in just her overnight visit. She told how a motel clerk held a room for her without knowing her name or having a credit card, on the strength of a brief phone call. She also added with obvious delight that en route to the Summit, she had to stop her car to wait for 12 deer to cross the road.

These things wouldn't happen in Portland, she said.

"Think, if you're from Portland, or from Germany, how big these stories would become," she said. "Create opportunities for people to tell the stories."

Carnes also noted that tourism can be a springboard for other types of economic development.

Carnes urged people to work together on marketing, and to tap established tourism agencies through the state and region.

She also answered some common concerns about tourism:

? "My business isn't a restaurant or motel, so it doesn't help me." She said the money from tourism circulates through the community, provides jobs that help local people spend, and affects all businesses.

? "Tourism will ruin our town." She said that doesn't have to happen: "You have a lot of control over your message and how you invite them."

She urged people to forge partnerships to market and cross-promote their businesses.

"We can do more together than we can separately," she said.

Some people attending the Summit said they were encouraged by the ideas and enthusiasm.

Julie Mansfield Smith of Kimberly, an owner of Cupper Creek Land Company, liked the networking and exchange of ideas.

"Being able to expand our business will be easier to do," she said.

Jeanette Newman, owner of the Squeeze Inn Restaurant, said, "It's been great. The speakers were wonderful. It was really informative."

She was particularly interesting in seeing "how we can make a brochure that includes local restaurants and motels." She also liked the idea of using social networking sites for business.

One idea that came up entailed tapping younger people to help merchants navigate the Internet world, either one-on-one or through a workshop.

Kim Joslin, who runs a non-profit that operates Sue-Z-Que's thrift store in John Day, appreciated panelist Janet Robertson's comments about the importance of cleanliness throughout a business and making a good first impression.

"I also liked the marketing information: volunteering in the community to get yourself out there, continually re-evaluating your market and how you're doing, knowing who your customers are and what they want," Joslin said. "What you do to improve your business and market yourself benefits the whole community."

Overall, Zaitz said, "The energy in the summit was a powerful antidote to all the bad news. That's pretty good news."

? Angel Carpenter of the Blue Mountain Eagle contributed to this report.

Anderson Cooper on Trump ralllies: Wow, he has no shame

'This is a huge connection': Analyst on pandemic's significance in the polls