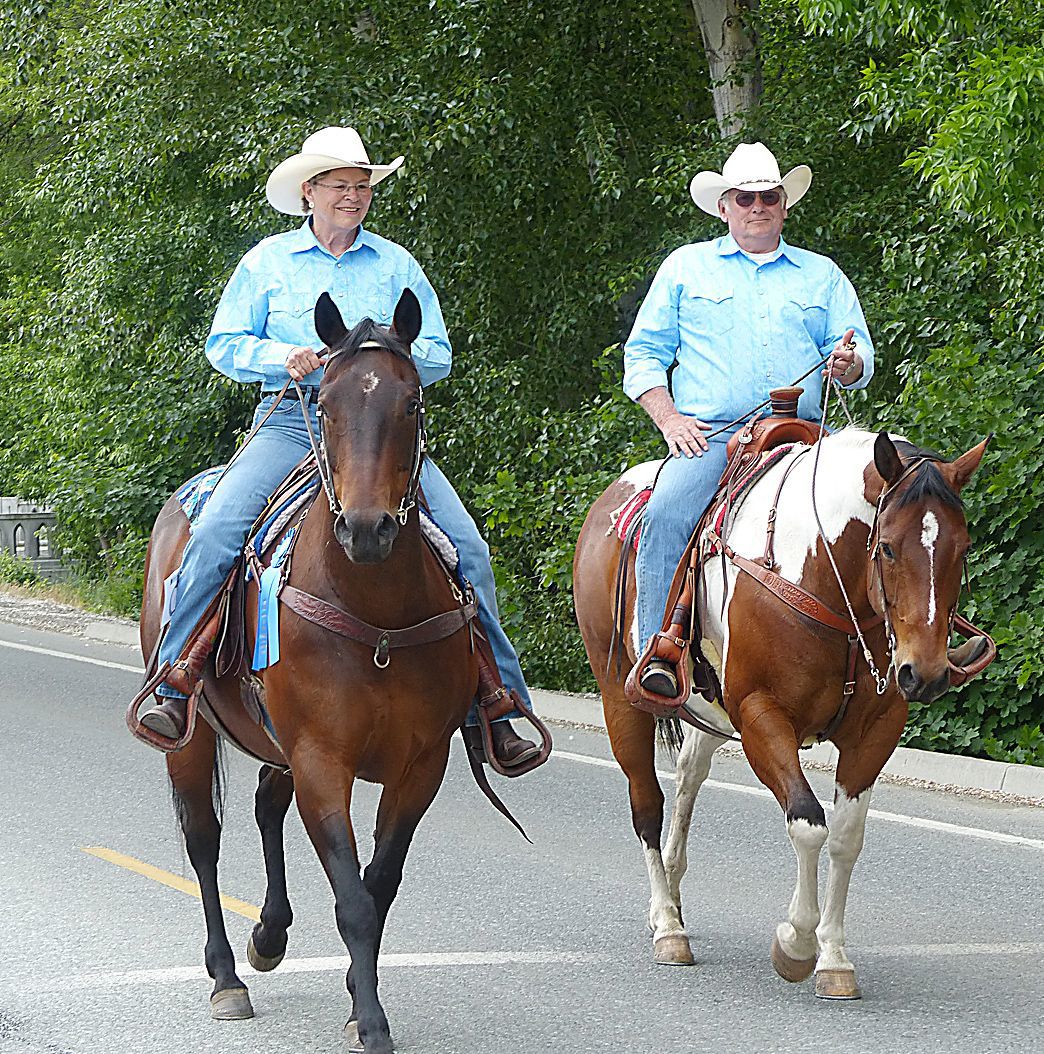 Julie and Dennis Reynolds ride in the ‘62 Days parade in Canyon City in 2014. 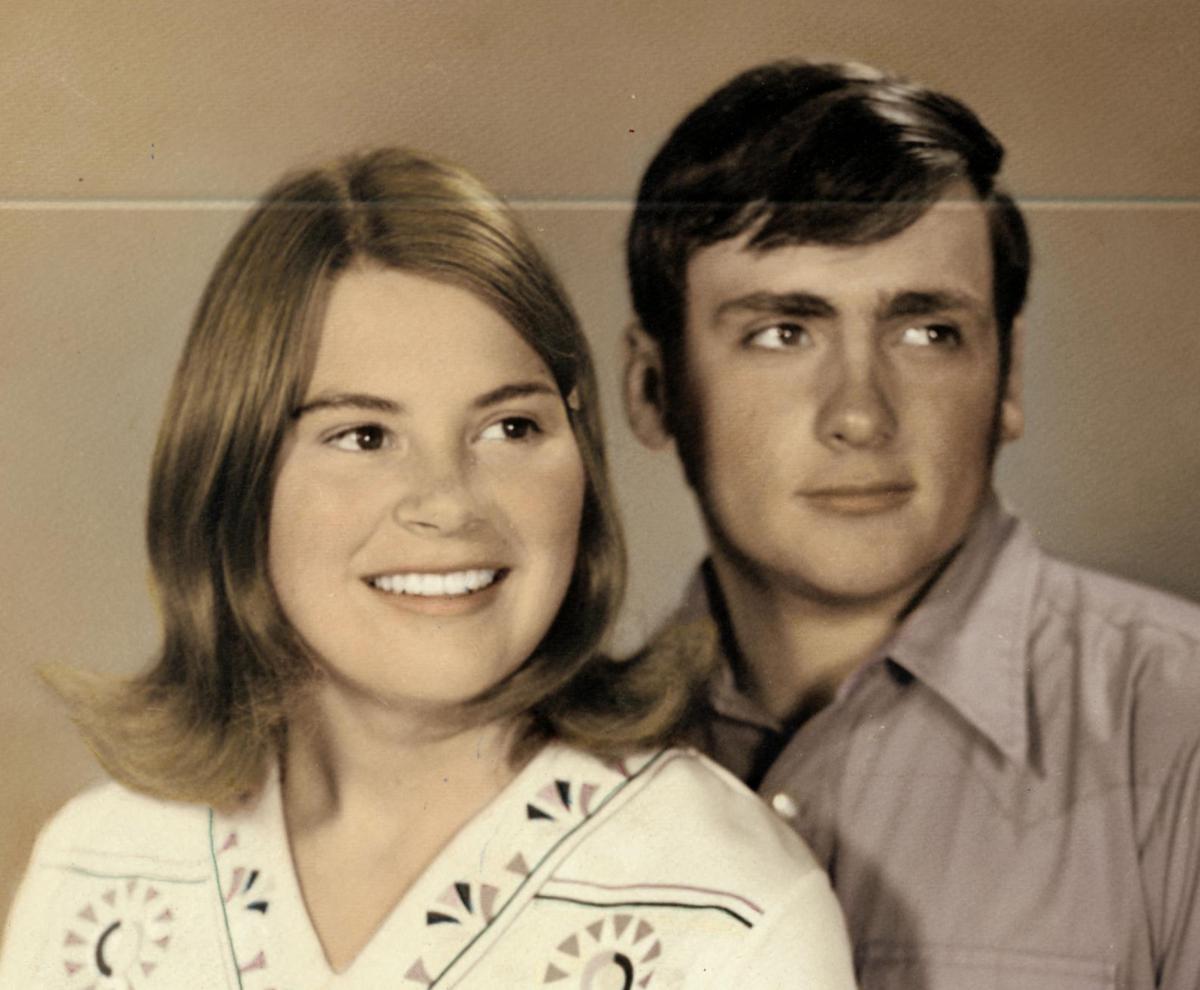 Julie and Dennis Reynolds in 1971. 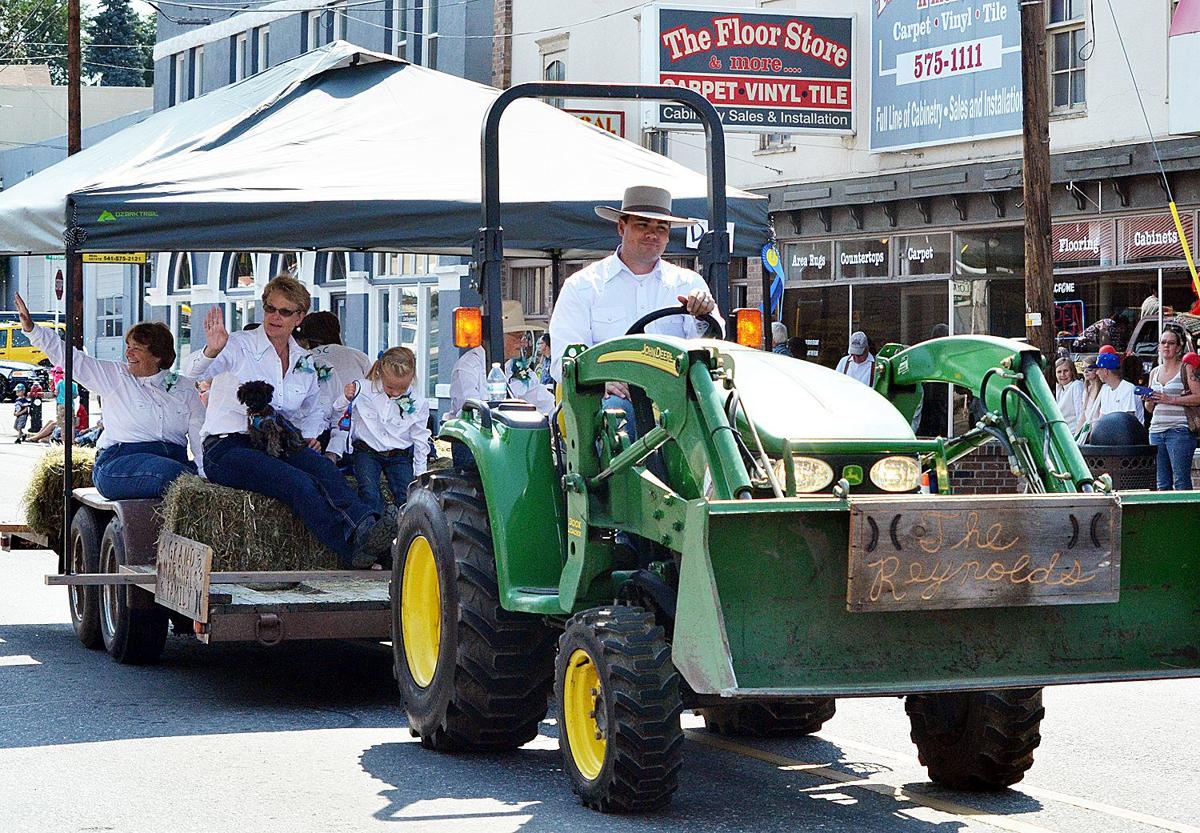 Dennis Reynolds and his family in the 2014 Grant County Fair Parade. 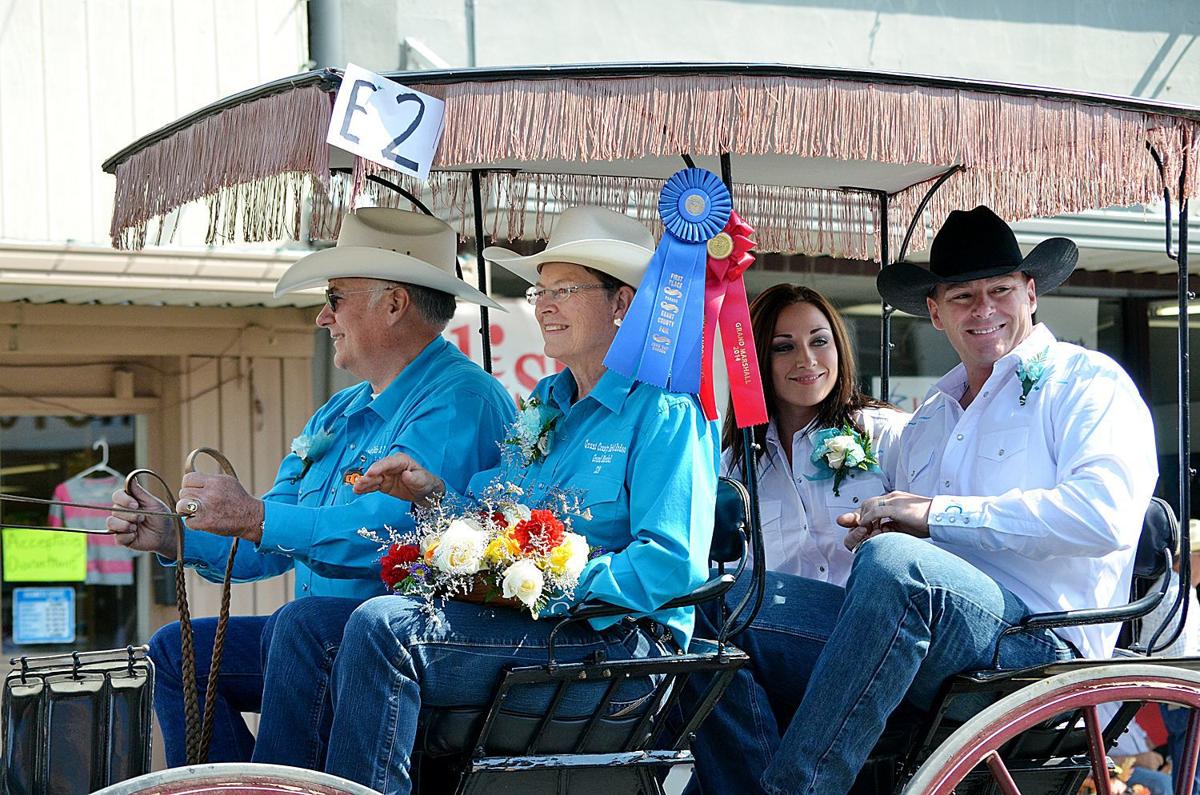 Grand Marshals Dennis and Julie Reynolds drive their horse-drawn carriage with their son Beau and his wife, Sara, in the 2014 Grant County Fair Parade. 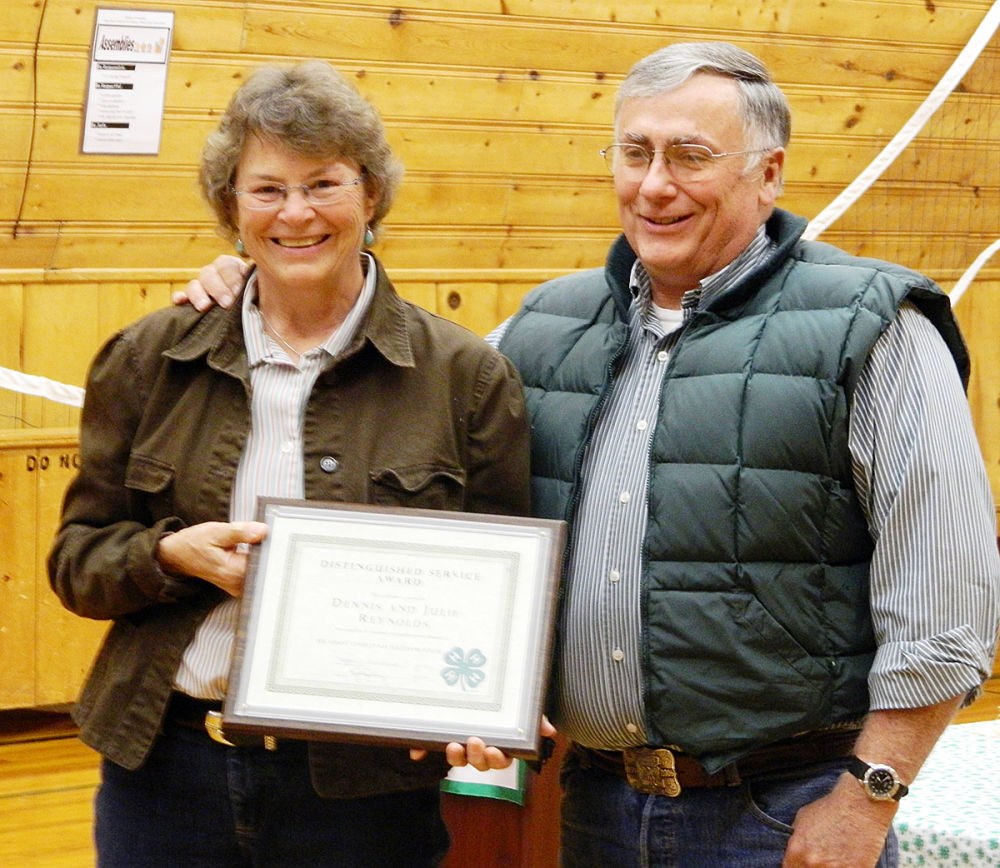 Julie and Dennis Reynolds received a distinguished service award for their longtime support of the Grant County 4-H program during the organization’s Oct. 17, 2013, achievement night at Seneca School. 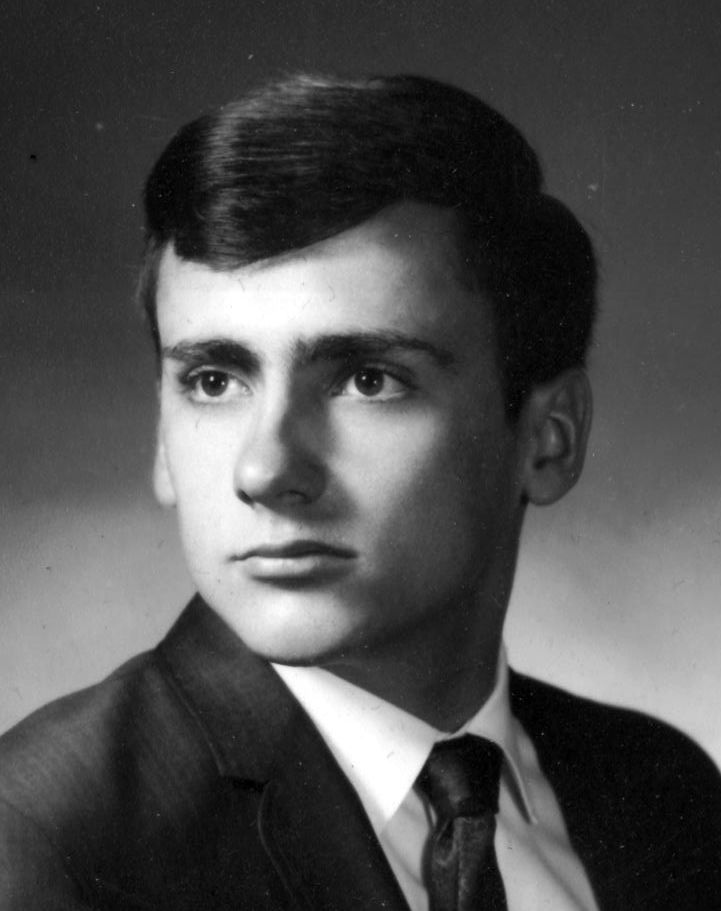 Julie and Dennis Reynolds ride in the ‘62 Days parade in Canyon City in 2014.

Julie and Dennis Reynolds in 1971.

Dennis Reynolds and his family in the 2014 Grant County Fair Parade.

Grand Marshals Dennis and Julie Reynolds drive their horse-drawn carriage with their son Beau and his wife, Sara, in the 2014 Grant County Fair Parade.

Julie and Dennis Reynolds received a distinguished service award for their longtime support of the Grant County 4-H program during the organization’s Oct. 17, 2013, achievement night at Seneca School.

Grant County and the state of Oregon lost a civic leader who left a tremendous legacy that his family, friends and the community can be proud of. Dennis Reynolds died April 1. He was 70 years old.

Reynolds was born in Prineville in 1949 and moved to John Day when he was in first grade. Growing up, he worked with his father, Percy, doing ranch work for Joe Oliver. He was a distance runner at Grant Union High School and held the state record in the javelin.

It was at Oregon State University pursuing a degree in forestry that Reynolds started dating Julie Elligsen, who also graduated from Grant Union in 1967 and was majoring in education. They were married at the St. Thomas Episcopal Church in Canyon City in 1970.

After college, Reynolds went to work for San Juan Lumber Co. in 1972, which later became Hudspeth Lumber Co., first as a road superintendent and then as a general manager at the mill in John Day. His father was a logging foreman. In 1982, when Hudspeth closed down, Reynolds and his father went into custom timber harvesting and forestry consulting as Keystone Ltd. until 1994.

Reynolds served two terms as Grant County judge, from 1994-2006, surviving an impeachment election in his first six months. In an April 2003 editorial, the Eagle asked “several local natural-resource activists” and “disgruntled ranchers” to lay off their attacks on Reynolds.

“They dismiss him as an all-talk-no-action politico who needs to stand down in the ‘War on the West,’” the editorial said. “That perception is unfortunate and wrongheaded. Nobody works harder for this county than Reynolds.”

Describing Reynolds as a “whirling dervish of activity,” the Eagle cited the numerous meetings he attended as county judge, from a forest counties conference in Reno, Nevada, and a wolf management meeting in Newport to property rights seminars in John Day and public forums in Monument and Fossil about John Day River navigability and possible federal land grabs.

In October 2006, Reynolds drafted a request to local clergy asking for volunteers to say an opening prayer at the start of each county court session. Congress starts each session with a prayer, so why not the Grant County Court, he reasoned.

Reynolds announced his decision not to seek a third term in February 2006, citing his own health and his desire to spend more time caring for his 83-year-old mother.

He reflected on his time on the county court after stepping down in January 2007.

“If I had one wish, it would be that we could bring the county toward a more neutralized focus,” he said. “That doesn’t mean we all have to agree, but they need to understand why things are happening the way that they are.”

U.S. Rep. Greg Walden read a tribute to Reynolds’ public service into the Congressional Record on April 5, 2006, thanking him for his years of dedication and numerous contributions.

Walden noted that Reynolds had led the county through tough financial times and oversaw essential projects, including construction of a new county health services center, a new criminal justice center, a major remodel of the county courthouse, a new facility for the road department and a new fairgrounds building.

“Judge Reynolds’ real impact has been how he has treated his fellow man and the heart with which he has approached every task,” Walden said. “Dennis has cared deeply about the people he has so ably served.”

The Reynolds had three boys. Percy and his wife, Nicole, live in Malaysia but plan to move back to the U.S. Beau and his wife, Sara, and children Jack and June live in Pendleton. Jake lives in Long Creek.

“Hunting season was the big gathering time for the family,” Beau said.

Dennis and Julie were very active in 4-H both as children and adults. At the county fair, they served as fair court chaperones, gate tenders, barn superintendents and horse show announcers.

The Reynolds were 4-H leaders for more than 40 years and were the rifle and pistol leaders for 30 years, hosting shooting contests at their home south of Canyon City. They were given the 4-H Distinguished Service Award in 2014 and the Extension Cooperator Award in 2018, among other 4-H and extension honors.

The Reynolds also were involved in the construction of the Heritage Building at the county fairgrounds and led the effort to refurbish the Sale Barn in 2012-13. They had only 20 days to gather donations for the barn and raised $30,000 in three weeks from Grant County residents, Julie said.

“Dad was very active in community groups,” Beau said. “If you threw a dart at a board covered with community activities, he was on that committee.”

Julie noted, whenever Dennis attended a committee meeting, they asked him to join because he was so knowledgeable.

For 16 years, Dennis helped build theatrical scenery for plays Julie put on at Grant Union High School, where she taught English and drama. She retired in 2011 after 20 years at Grant Union.

After retiring from county government, Reynolds spent more time at the family ranch south of Prairie City and restoring antique horse-drawn carriages, including a 1909 two-seated surrey, an 1885 Victorian-era carriage from Germany and a circa-1919 doctor’s buggy.

He loved all the little cities in Grant County and never stood for just one, Julie said.

A celebration of life service for Dennis Reynolds will take place in the Heritage Building on Saturday, April 27, starting at 1 p.m. To help with the potluck or for more information, contact Julie Reynolds at julieareynolds@centurytel.net.

Ernst: 'Yes,' majority of the protests are peaceful

What's left of a glacier that's thousands of years old

Austin Mayor: ICUs will be overrun in 10 days