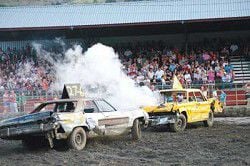 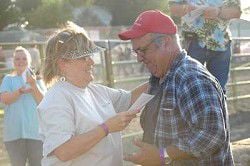 JOHN DAY - The cars enter the arena, their engines creating a thunderous roar. The crowd stands as the cars move into position across the mud-filled arena. Then, with the first hit, the boisterous crowd adds to the fury of noise.

In turnout and sound, the crowd leaves no doubt: the Demolition Derby is one of the more popular events in Grant County.

The final heat came down to the wire as Michael Berry of Hines edged out Spencer Stegman of Prineville. Berry was awarded the last hit, much to the chagrin of many in the crowd who thought Stegman would have the last shot as he tried to work his way out of a tight spot.

In the end, the the judges decided to award Berry the trophy. Cody Frazier of Sandy, finished third.

"I think it was a hard-hitting, fast derby," Berry said after winning the main.

Berry said as the main was concluding his car wouldn't start. He made a quick prayer, and said it was quickly answered as the car started and he was able to get a final hit.

For his efforts, Berry took home $1,500. Stegman won $1,000 and Frazier walked away with $500 from the highest-paying derby in Eastern Oregon.

Another highlight of the action packed night took place just prior to the first heat. Steve Patterson of Prairie City was honored by the Whiskey Gulch Gang for his work for and in the Derby.

"He's what we call the father of our Derby," Gang member Polly Post said.

Along with competing in almost all of the Gang-sponsored derbies, Post said Patterson is always helping promote the derby. She said he also isn't afraid to help out other drivers.

Patterson, who won the main event last year, also travels to compete in other competitions.

Tips to stay safe this 4th of July