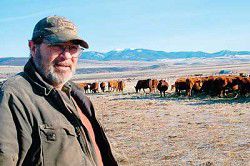 <I>photos from the Blue Mountain Eagle</I><BR>Rancher Ken Holliday was among those fighting efforts to stop grazing on public lands. 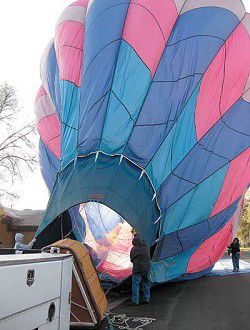 Colorful balloons floated over Grant County in the annual festival sponsored by the Chamber of Commerce.

<I>photos from the Blue Mountain Eagle</I><BR>Rancher Ken Holliday was among those fighting efforts to stop grazing on public lands.

Colorful balloons floated over Grant County in the annual festival sponsored by the Chamber of Commerce.

GRANT COUNTY - The year 2009 was marked by heated politics, a flat economy, stimulus hopes and difficult times for many local families.

The attempted recall of County Judge Mark Webb drew headlines for six months, while the battle over grazing on public lands took hold as a persistent, year-round issue.

Following is a look at some of the major stories that developed in 2009.

January? Dayville ranchers Loren and Piper Stout announce they'll sue over habitat damage caused by wild horses, but blamed on the ranchers' cows. The move is part of an ongoing battle over public lands grazing, with critical decisions expected in federal court in 2010.

? Prairie City launches a new food bank, adding to the agencies working to aid the region in a time of high unemployment.

February? A benefit dinner/auction for embattled area cattle ranchers draws 500 people to the Grant County Fairgrounds and raises some $65,000 for legal expenses.

March? Unemployment figures spike to 19.3 percent in Grant County, as all but one of the local mills stutter to a stop.

? The union for Grant County's road workers complains to the state Employment Relations Board, triggering hearings and a review that is as yet unresolved. An administrative law judge is expected to rule in the case any time now.

April? A broad-based group led by state Fish and Wildlife officials works on a plan to bolster survival of mule deer populations in the Murderers Creek wildlife area.

? Danny Evans, the last of three men to be sentenced, apologizes in court for the Halloween 2008 robbery and assault in Long Creek at the home of a medical-marijuana grower.

June ? A federal judge rules that cattle can graze - with limitations and upgraded fencing - on several Malheur National Forest allotments. Although a victory for the ranchers, the battle over grazing continues in U.S. District Court.

? The government OKs a $5 million stimulus grant for development of a pellet plant in Grant or Harney Counties. A proposal by Malheur Lumber Company eventually is selected, meaning that the plant will come to Grant County.

? A citizen group forms to seek the recall of County Judge Mark Webb, targeting his management style and decisions made affecting the Road Department, Sheriff's Office and other actions.

July? The new Grant County Regional Airport terminal project goes out to bid. Kirby Nagelhout Construction of Bend is the low bidder, with the building to be ready for occupancy in mid July 2010.

August ? Police and Forest Service officials begin a series of raids on marijuana plantations on federal lands in the region, destroying thousands of pot plants.

September? More than 500 people turn out for a memorial ceremony at the Seventh Street Complex in honor of Steven Uptegrove, a local firefighter who was killed by a falling snag during a marijuana grow clean-up operation.

? The Grant Soil and Water Conservation District celebrates the completion of its 100th diversion project, a conservation record that spans 16 years.

? County Judge Mark Webb mans the podium unopposed in a recall election forum, after the committee seeking to oust him declines to participate.

?A jury finds Jessie Lyn Bratcher guilty except for insanity - due to his war-related stress - in the 2008 killing of Jose Ceja Medina. In December he is sent to the Oregon State Hospital, under lifetime supervision of the state Psychiatric Security Review Board.

November? Voters retain Mark Webb as County Judge by 62 percent to 38 percent in the Nov. 4 election, despite significant 11th-hour campaign contributions from the road workers' union to the recall effort.

December ? Residents turn out for a meeting, rally to save the Canyon Creek Meadows Dam. ODFW is studying the leaky, 1960s-era dam to determine whether to save it or remove it. A decision is due in January.