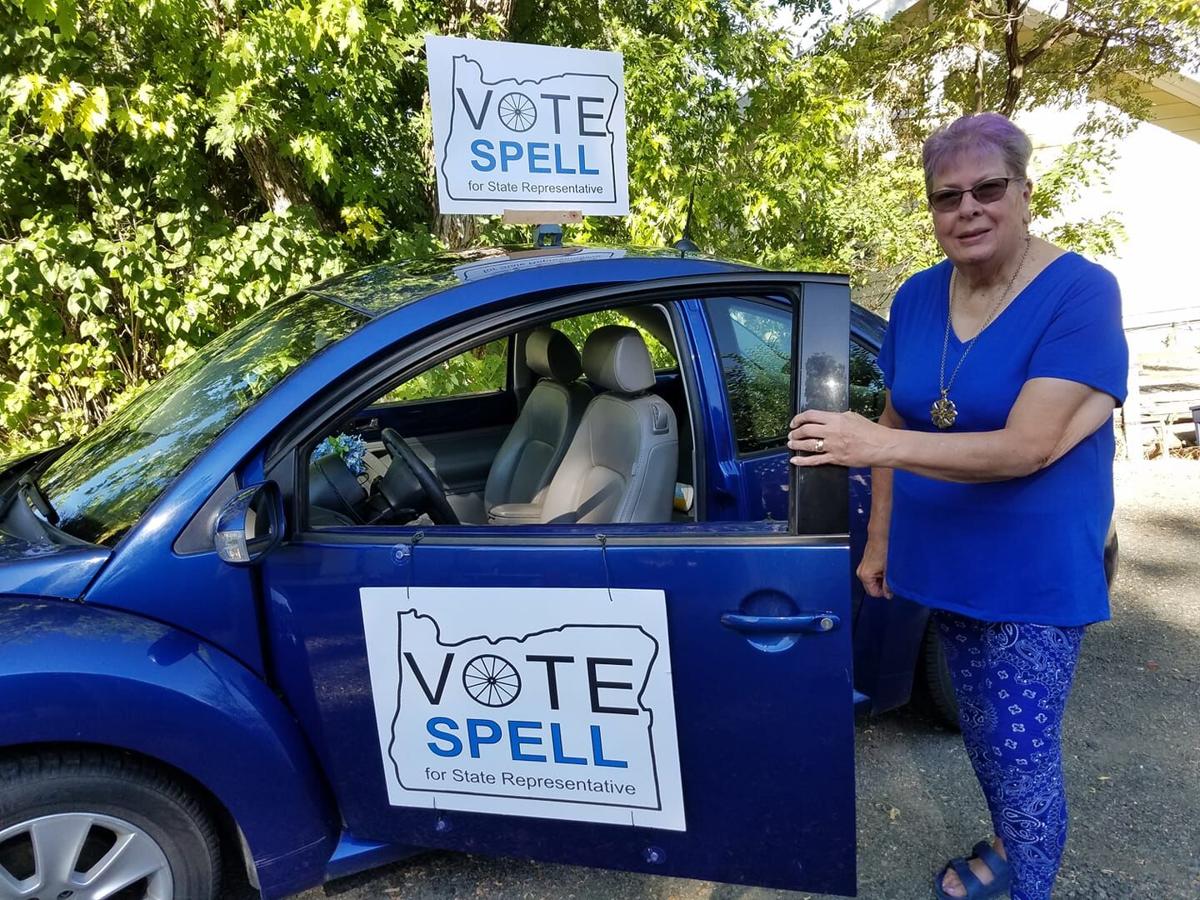 Beth Spell, the Democratic nominee for Oregon House District 60, participated in the Grant County Fair this year with her vehicle decorated in campaign signs. 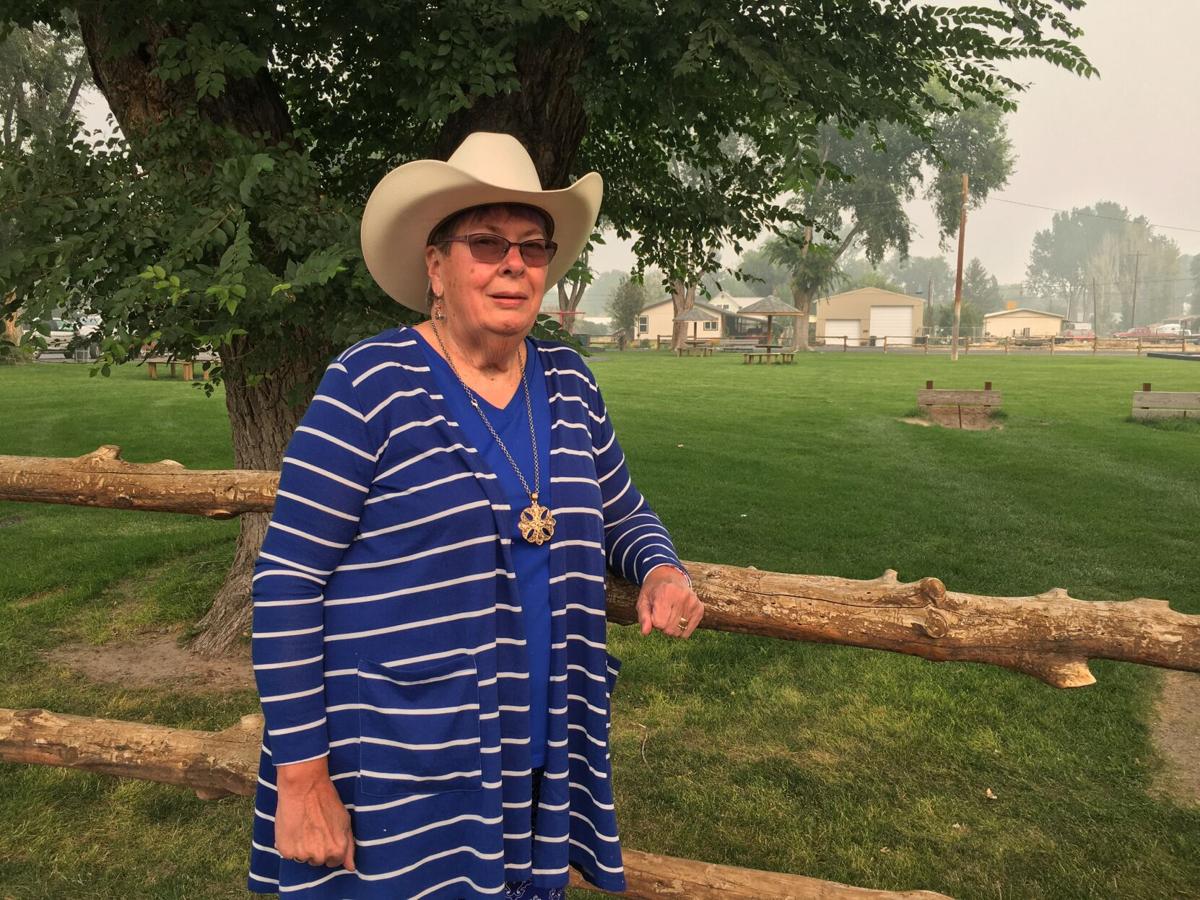 Beth Spell, the Democratic nominee for Oregon House District 60, decided to run because she said people need a choice.

Beth Spell, the Democratic nominee for Oregon House District 60, participated in the Grant County Fair this year with her vehicle decorated in campaign signs.

Beth Spell, the Democratic nominee for Oregon House District 60, decided to run because she said people need a choice.

Beth Spell has lived in Grant County all her life, with the exception of college and the beginning of her marriage, and she’s now campaigning to be representative of Oregon’s 60th House district as the Democratic nominee.

Spell’s father and grandmother lived in Grant County all of their lives. Spell’s great-grandparents moved to Grant County in the late 1860s.

“I am Grant County, born and raised, and very much feel that this is the land that I’ve been called to live in and try to make it as good a place as possible for people to live in,” Spell said.

Spell was a school teacher for a number of years and was on a negotiating team for her union when contracts were negotiated with the school board. She said this experience helped her find the ability to sit down and work with somebody who had a contrary position.

The conversations would not be contentious as she worked to keep the discussion in the middle ground, she said. She also served on several diocese-wide committees for her church, the Episcopal Diocese of Eastern Oregon. She said she developed a lot of mediation and discussion skills with people of varying positions.

Spell decided to run because she said people need a choice in deciding a representative.

“It’s not an election unless they have a choice, and for a number of years, our representative has been selected mid-term by a group of commissioners and other county officials, and rarely does anybody ever run against them,” Spell said. “They’re really in that position without receiving a mandate from the people.”

Spell said, as she goes further into the race, there have been a lot of issues that have been ignored. She said, by offering people a choice, she is offering them a different perspective.

Spell said the needs of Eastern Oregon don’t seem to be communicated very well, and the prominent difference between the eastern and western sides of the state are their thoughts on what makes life livable.

“We need to develop a strategy and a style of communication so we can work with those people that are a majority of the population so our needs are met and we can meld the two different cultures to work together,” Spell said.

“We can’t keep trying to move backwards to the way things were when I was being raised in the ’50s and ’60s,” Spell said. “Those jobs are gone, and they’re probably not coming back just like the jobs we had 100 years ago — those are gone too. We need to look to the future.”

Spell said, if elected, she will look at and investigate the concerns of the people regardless of their political affiliation because her job will be to represent everyone in District 60.

Spell said there has been significant conflict in Eastern Oregon regarding how to deal with COVID-19.

“I think people need to listen to the scientists and the doctors and follow their recommendations and be careful,” Spell said. “In a position of leadership, a leader should be encouraging people to follow guidelines and be careful and not take unnecessary risk.”

She said almost everybody has a fragile person in their life, and to flaunt guidelines for personal freedom is putting friends and family in jeopardy. She added that the resistance has also prolonged the need for restrictions and mandates from the state.

“We can shorten the influence of the pandemic if we were more careful,” Spell said.

Spell said she knows people are tired of the influence that COVID-19 has had on life, but the longer people fight it the longer the problem will persist.

Spell said people should vote for her because she will stay in the room during legislative sessions, and if the discussion gets hard, she is not going to leave because she is going to represent everybody in her district. She said she’s a good listener determined to talk and work cooperatively with everyone. Spell is also the Working Families Party nominee. She said this party focuses on workers: child care opportunities, affordable housing, family wage jobs and more.

“Those are the things we need to work towards to make our community viable for the future,” Spell said.

"We need to develop a strategy and a style of communication so we can work with those people that are a majority of the population so our needs are met and we can meld the two different cultures to work together."

After being appointed as representative for Oregon’s House District 60 in January, Mark Owens said he has worked to listen and be a voice for …

'He put us in danger': Rachel Vindman on Trump

See the difference between Ivanka and Donald Trump's rallies