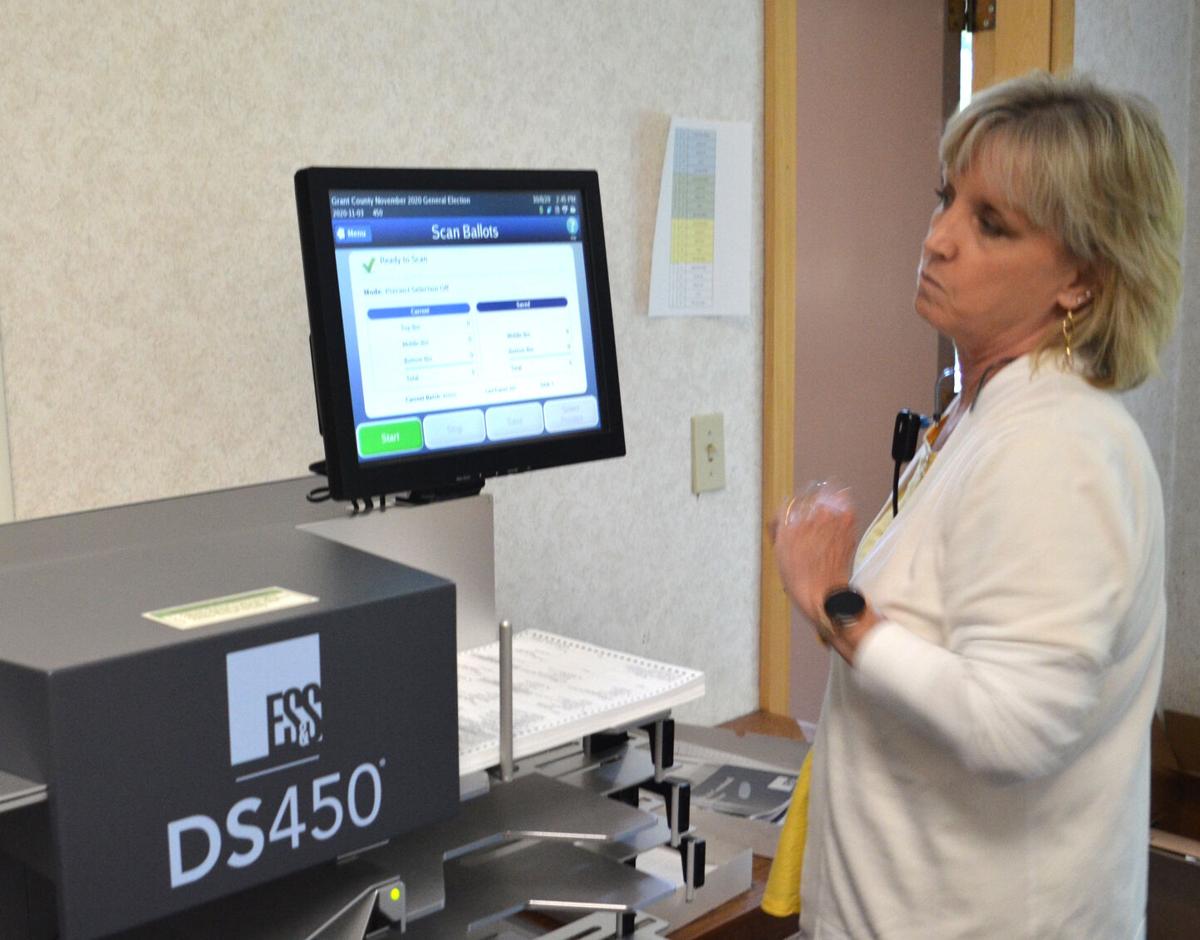 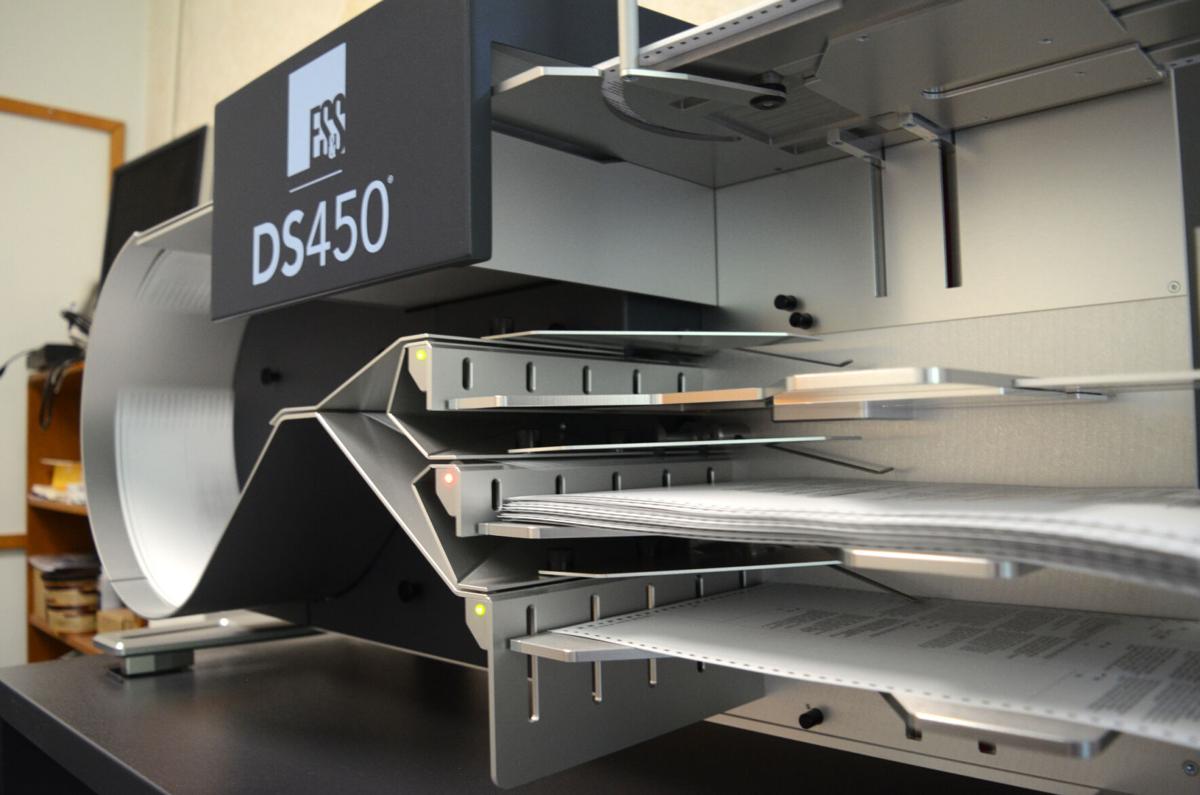 Grant County recently purchased a new ballot-counting machine. The ballot machine counts the votes from a test deck as the machine records the information. 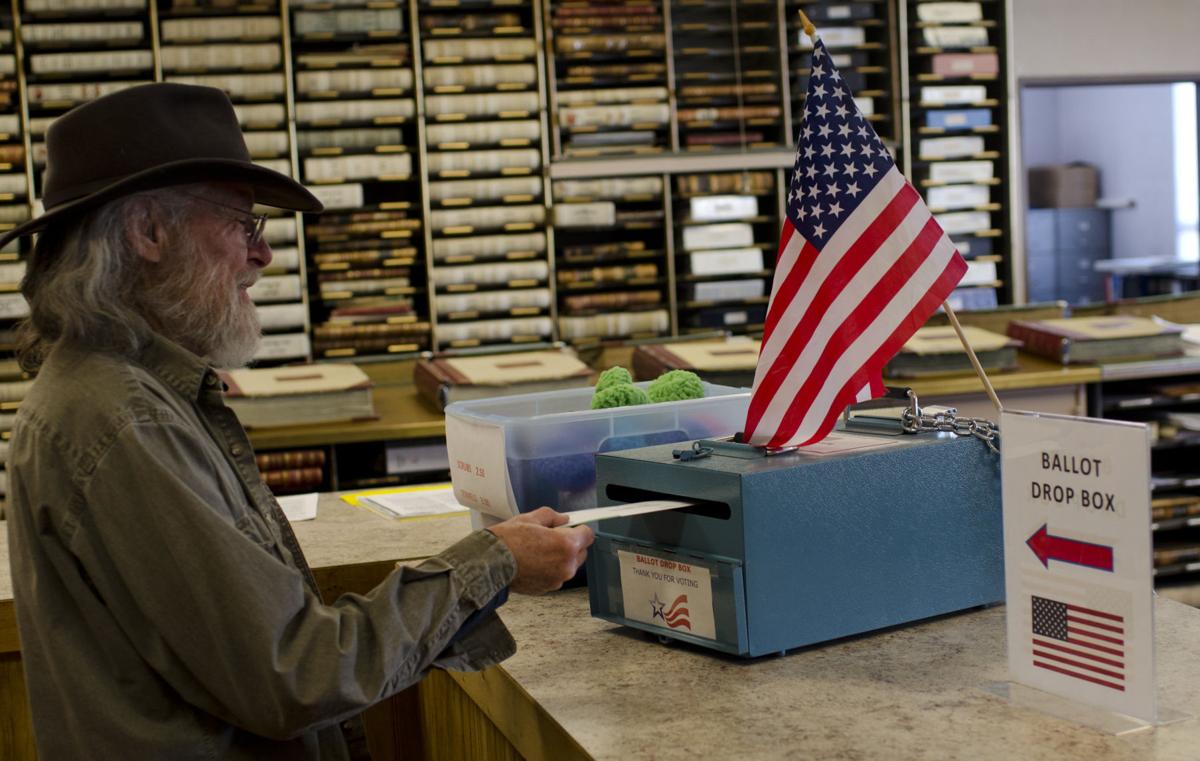 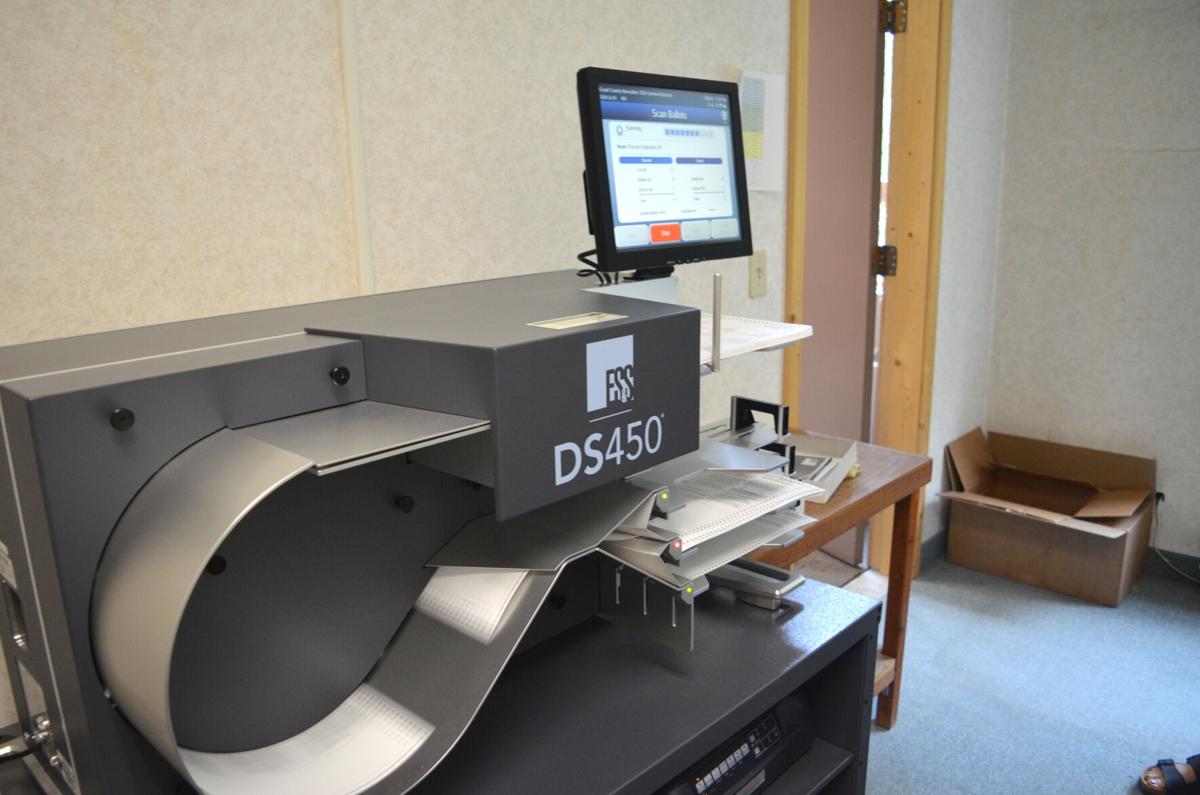 The ballot machine counts votes from a test deck, which is used to make sure the machine is working well. 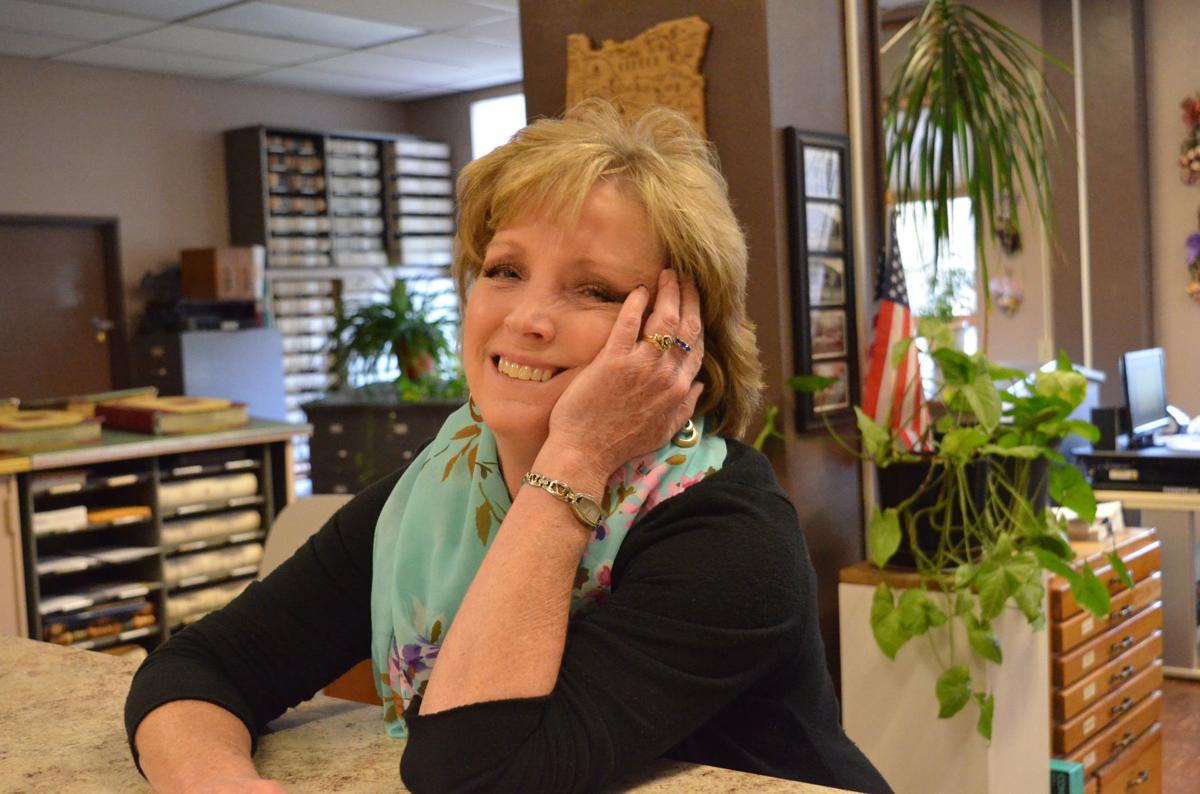 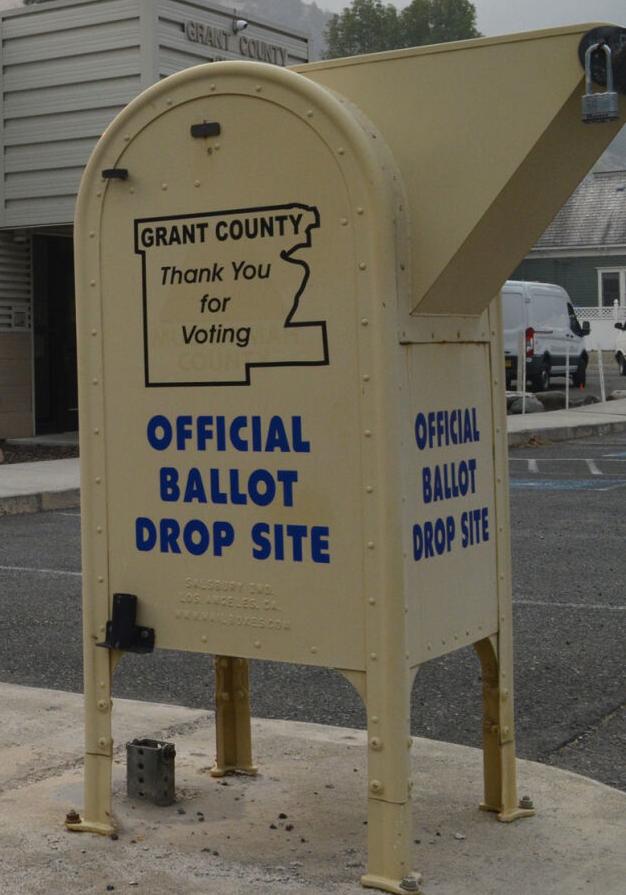 An official Grant County ballot drop box behind the courthouse. 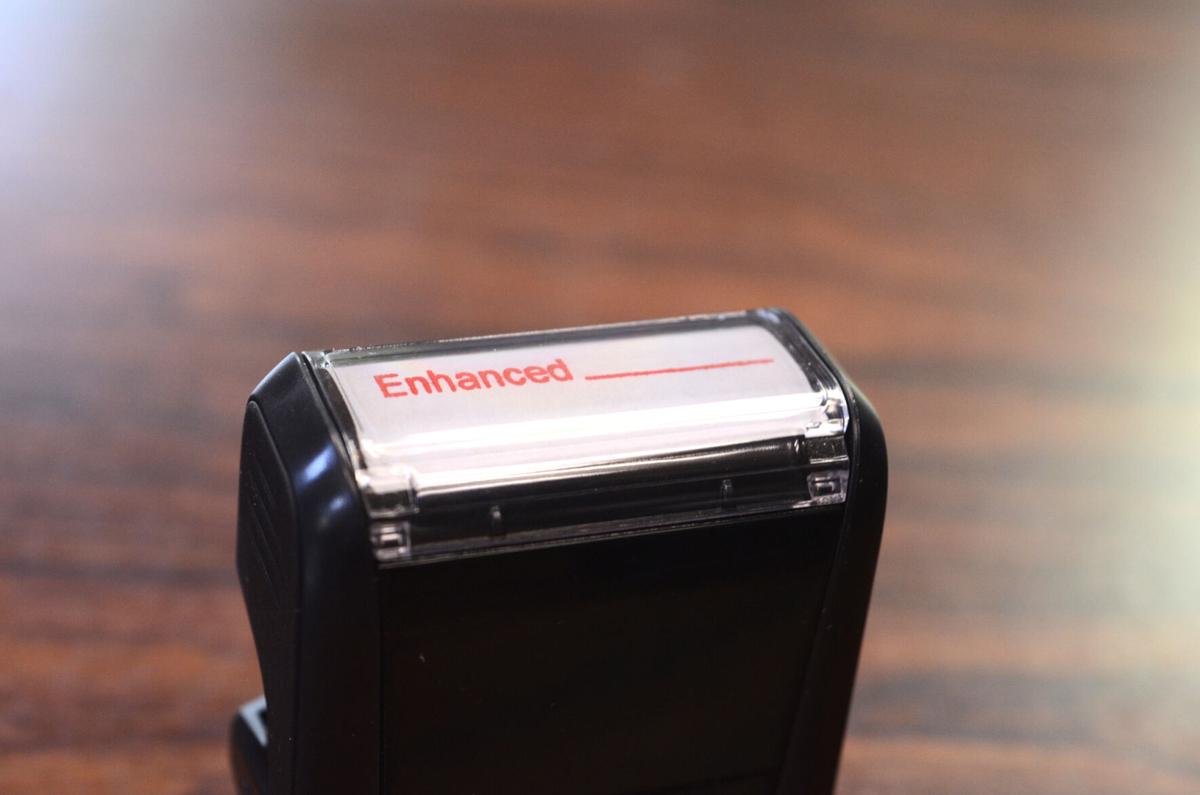 When a ballot is enhanced or duplicated, it is stamped by an election worker. 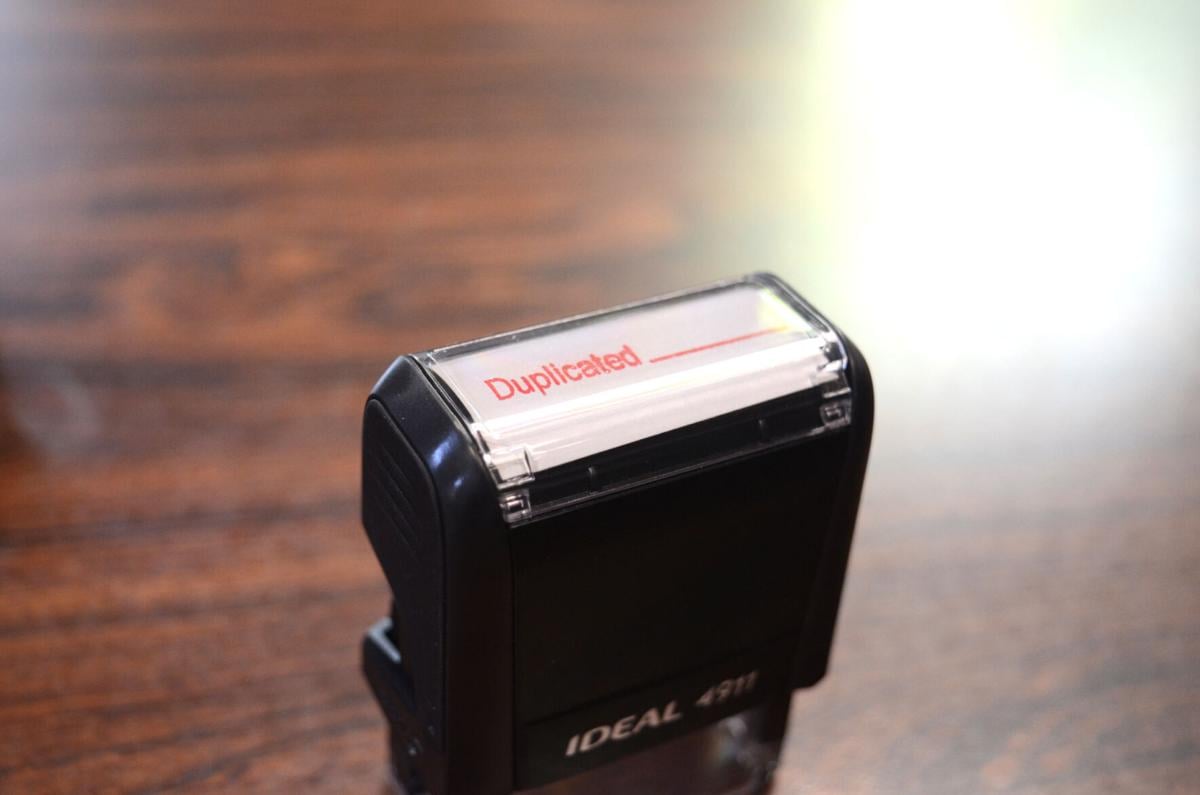 Stamps labeled with 'enhance' or 'duplicate' are available for election day workers when they need them.

Grant County recently purchased a new ballot-counting machine. The ballot machine counts the votes from a test deck as the machine records the information.

The ballot machine counts votes from a test deck, which is used to make sure the machine is working well.

An official Grant County ballot drop box behind the courthouse.

When a ballot is enhanced or duplicated, it is stamped by an election worker.

Stamps labeled with 'enhance' or 'duplicate' are available for election day workers when they need them.

Concerns over mail-in ballots have made national headlines, but Grant County Clerk Brenda Percy said the process is secure with abundant checks and balances.

Percy said Oct. 28 is the last day people should mail in their ballots, but people can still use the election drop boxes until 8 p.m. on Election Day.

Percy said, once ballots have been submitted by mail or through one of two ballot drop boxes in the county, they are delivered to the County Clerk’s Office and each envelope is date stamped.

The barcode on each envelope is scanned, which pulls up the voter’s registration card on a computer, so Percy and her team can verify the signature on each ballot.

If signatures don’t match the signature on file, or if an envelope is not signed, Percy said she makes an attempt to call the person, and every person whose ballot is challenged receives a letter stating their signature has been challenged. They have 14 days after the election to get the signature fixed, Percy said.

The ballots are then kept in a locked room until seven days prior to Election Day when Percy and her team can begin opening envelopes and getting ballots ready for scanning.

Percy, Deputy Clerk Brooke Griffith and two board members work together throughout the ballot process.

The secrecy envelope and the ballots are removed from the signature envelope and are then separated, Percy said.

Percy said all ballots are inspected to ensure they are machine readable and a voter’s actual vote will be recorded accurately. Questionable marks may require that the ballot be enhanced or duplicated if the intent of the voter is very clear, Percy said.

For example, if a voter makes a correction on their ballot and the intent is clear, their ballot can possibly be enhanced. Percy said, if a ballot is enhanced or duplicated, it is processed by two election workers of different party affiliation. One worker acts as the enhancer or duplicator, and the second observes.

Percy said this rarely happens because most people call the clerk’s office if they made a mistake and a replacement ballot is generated, which invalidates the original ballot.

There are instances when people can receive two ballots, which is caused by a correction to voter registration, Percy said. When a correction is done, it generates a replacement ballot and inactivates the original ballot.

An example of a correction in which a voter would receive both ballots is when a voter moves from one residence to another but keeps the same P.O. Box. If their mailing address also changes, the original will be returned to the clerk’s office because ballots by law cannot be forwarded.

Percy added that voting twice in the same election is against the law.

Percy said the tally machines are not internet based. In Grant County, the information from the ballot counting machine is manually entered on election night by Percy to the secure, online reporting website, results.oregonvotes.gov.

“People can rest assured, there is no internet access to these machines in the state of Oregon, anywhere,” Percy said.

Voters can check their ballot status at secure.sos.state.or.us/orestar/vr/showVoterSearch.do.

“I am confident that their ballots are safe in the mail and are delivered,” Percy said.

Percy said many snowbirds, who travel south for the winter, live in Grant County and claim it as their residence. She said they can get an absentee ballot mailed to them and return it to the clerk’s office.

“It’s their right to vote here if they claim Oregon as their residence,” Percy said. “They can’t claim residency in the state of Oregon and Arizona.”

If a person gets a license or registers in a different state, the state of Oregon is notified, and the county clerk will get the information, which causes the voter to be inactivated.

The county just purchased a new, faster ballot machine, and they are tested prior to each election. The company that creates the ballots for Percy sends her a test deck for each election to use for required auditing of the machine.

Each action taken on the machine and ballots are also recorded in the audit log, which is printed out after votes are counted. There are also securities all around the clerk’s office to make sure everything is done right.

“Everything we do is on camera, and I have nothing to hide,” Percy said. “There are checks and balances throughout the whole election process.”

'It's so hard': Pandemic taking a toll on frontline workers