The pavilion at the Grant County Fairgrounds was filled to max capacity for a town hall April 8.

John Day resident Hank Lissman ask a questions to the council on April 8 at a filled pavilion.

Pam Durr speaks in support of the John Day Police Department on April 8. 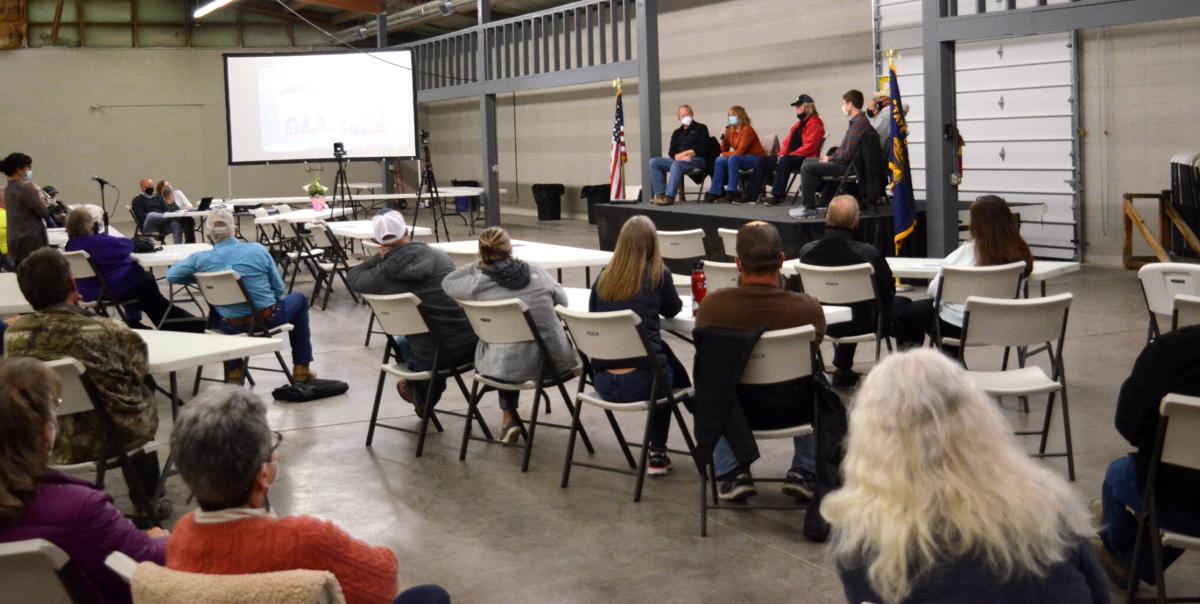 John Day City Councilor Shannon Adair answers a question from an audience member during a town hall meeting on April 9. 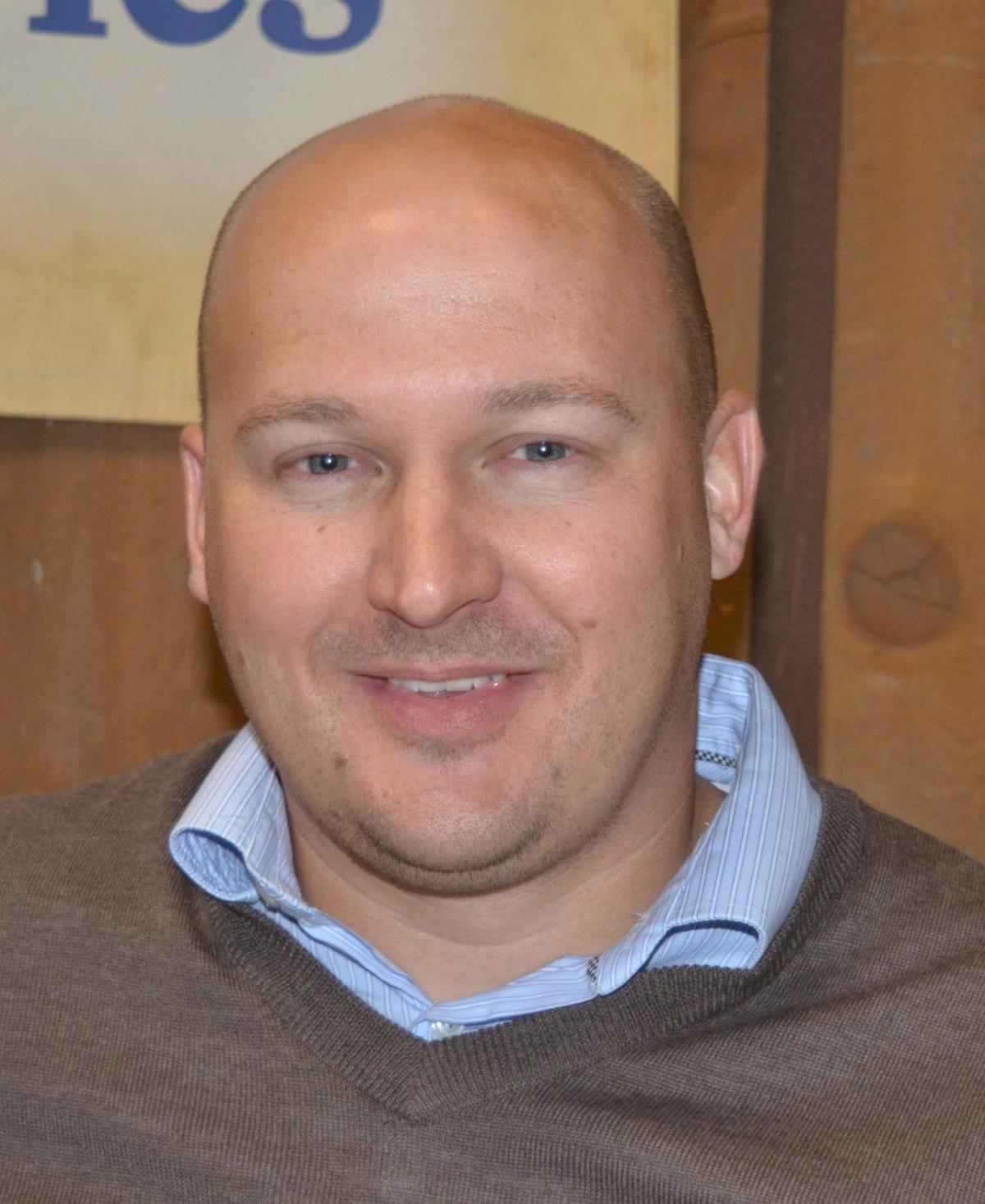 The pavilion at the Grant County Fairgrounds was filled to max capacity for a town hall April 8.

John Day resident Hank Lissman ask a questions to the council on April 8 at a filled pavilion.

Pam Durr speaks in support of the John Day Police Department on April 8.

John Day City Councilor Shannon Adair answers a question from an audience member during a town hall meeting on April 9.

The future of the police department took center stage as a handful of comments and questions centered on the two options presented for law enforcement in the future: entering a law enforcement services agreement with the Grant County Sheriff’s Office or seeking a local levy to fund the department.

Transitioning to the Grant County Sheriff’s Office would mean the three current John Day officers would be transferred to the county sheriff’s office at a cost to the city of about $450,000 next fiscal year, according to City Manager Nick Green.

Green said, if the city were to keep the department, three three officers would be retained by the city with a new police chief hired by Sept. 1, Police Chief Mike Durr’s set date for retirement. The cost would be $655,405 next year, an increase of $119,979 over this year’s budget due to increasing costs and expenses.

The city would need about $75,000 per year in local operating funds to keep the department, which would be covered by a five-year local tax costing John Day residents between 10 and 15 cents per $1,000 of assessed value. A levy would need to be approved by voters in John Day.

The city would need a population of about 2,500 people or more to sustain the police department in the future without raising taxes, according to Green.

John Day resident and Dispatch Director Valerie Maynard said she is in favor of keeping the police department. She asked the council what kind of coverage would be provided to John Day if the city were to contract with the sheriff’s office.

“The county is very large, and you can put three more county officers on, and they aren’t necessarily near John Day,” Maynard said. “If you’re even looking at that, I would like to see some information as to what kind of coverage we would be looking at.”

Green said, while the discussions are ongoing regarding the specific coverage the city would receive, the three transitioning employees would be paid for by the John Day tax base and would be in John Day for a substantial amount of their time.

“The intent is that we’re paying for three officers that would be patrolling in John Day,” Green said.

Show me the money

While a majority of residents and city councilors at the meeting favored keeping the department, there was less consensus on the levy and budgeting for the department.

John Day resident Hank Lissman said the police department is doing well, but the levy needed to fund the department would have consequences.

“That 10 to 15 cents is going to use up my whole raise in my property tax before I buy groceries, gas and anything else,” Lissman said. “I don’t know the answer to the question (of funding), and I know it’s a terrible problem.”

John Day resident Dusty Williams asked if the greenhouse, which is paying for one employee, was making enough money to cover an employee at the police department.

Williams also asked about the number of city employees.

Green said, when he got to John Day, there were 22 city employees, and now there are 18. However, when Green started, the dispatch center and its several employees were still under John Day until the dispatch center transitioned to its current agreement away from the city. Green said four employees are in city hall, but there were two when he started. Several of the employees in city hall are part-time workers as well.

Juan Vargas said, in watching the town hall, he noticed that there were many opinions, with both the city and residents being defensive. He said, while many residents see that the city is trying to grow the population in John Day through these projects, he thinks the city also needs to prioritize them.

“I think what we need to do as a community is focus together with a bit of understanding and figuring out what projects are critical now and what needs to be done now,” Vargas said. “Right now, I think it’s agreed by the community at large that the police department is a critical project. As a community we’ve got to stick together and figure this out.”

Tim Rude, who lives in Prairie City but owns a business in John Day, said he knows that grants are beneficial, but there is an added cost involved with getting grants. He said more job opportunities are another source to target for bringing people in for growth.

Councilor Elliot Sky said an opportunity that John Day has is targeting high-paying remote jobs with broadband. Sky said, where the city may not have the infrastructure for physical local jobs, they have the potential for people moving here for remote jobs while paying taxes.

“I think one of the obstacles that you guys are up against is the majority of the people in this community are from a conservative base,” Rude said. “The people that have been here forever are timber, ranching, trucking... I think as a community, a lot of the people here are those people. What you’re saying, I disagree with. It’s true from a remote side of things, (but) we don’t want this to be Bend. We want this to be Grant County.”

John Day resident Rich Lallatin said he is in support of keeping the police department and in favor of looking for a long-term funding solution. He said he would be willing to vote for temporarily increasing his taxes to pay for the department, but stressed that it would be temporary because of the rising costs.

“The only other option is to increase the amount of people paying taxes,” Lallatin said. “In other words, John Day has to grow or it will lose the police department. We’re at a point now where we either grow or we die.”

No decision was made, but Green said the city will need to decide by the April 27 council meeting.

"John Day has to grow or it will lose the police department. We're at a point now where we either grow or we die."

Voters will decide the fate of the John Day Police Department.

Promotion and Key Hire in Portland

He was at the Capitol riot. Now he's tallying Arizona ballots