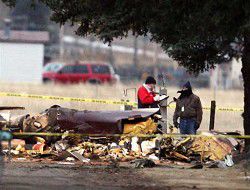 Officials investigate the scene of fatal plane crash outside the Butte Airport in Butte, Mont., on Sunday, March 22, 2009. A small plane, possibly carrying children on a ski trip, crashed Sunday as it approached the Butte airport, killing 14 to 17 people aboard, according to a federal official. The single engine turboprop nose-dived into a cemetery 500 feet (150 meters) from its destination. (AP Photo/Mike Albans)

NTSB investigators, local police and members of the sheriff department investigate the scene of fatal plane crash outside the Butte Airport in Butte, Mont., on Sunday, March 22, 2009. A small plane, possibly carrying children on a ski trip, crashed Sunday as it approached the Butte airport, killing 14 to 17 people aboard, according to a federal official. The single engine turboprop nose-dived into a cemetery 500 feet (150 meters) from its destination. (AP Photo/Mike Albans)

Officials investigate the scene of fatal plane crash outside the Butte Airport in Butte, Mont., on Sunday, March 22, 2009. A small plane, possibly carrying children on a ski trip, crashed Sunday as it approached the Butte airport, killing 14 to 17 people aboard, according to a federal official. The single engine turboprop nose-dived into a cemetery 500 feet (150 meters) from its destination. (AP Photo/Mike Albans)

NTSB investigators, local police and members of the sheriff department investigate the scene of fatal plane crash outside the Butte Airport in Butte, Mont., on Sunday, March 22, 2009. A small plane, possibly carrying children on a ski trip, crashed Sunday as it approached the Butte airport, killing 14 to 17 people aboard, according to a federal official. The single engine turboprop nose-dived into a cemetery 500 feet (150 meters) from its destination. (AP Photo/Mike Albans)

A plane that crashed into a Montana cemetery Sunday afternoon was carrying the family of a California man who is part owner of a Wallowa County ranch.

Investigators said Monday they'll look into whether the single-engine turboprop plane was overloaded when it nose-dived into a cemetery and killed all 14 people on board, who were headed to a ski trip.

Two daughters of Irving M. Feldkamp, a part owner of a ranch on the Lostine River, along with their families, were among victims of the crash in Butte, Mont., according to Enterprise attorney Rahn Hostetter. Seven adults and seven children were killed in the crash.

"He is a friend of mine. It's hard to get your head around a friend losing most of his family," Hostetter told the Wallowa County Chieftain Monday morning.

The turbo-prop plane, en route from California, that crashed Sunday was registered to Eagle Cap Leasing Inc., in Enterprise, and Hostetter is the attorney for the company as well as registered agent. Irving Feldkamp is president of the company, which has seven shareholders and owns the one plane, as well as other assets.

Hostetter said he had been receiving many calls from national news organizations, since his number and address is listed on the registration.

Hostetter said that Feldkamp, and his wife, Pam, were driving to Montana to meet their daughters and grandchildren for a family ski vacation when the plane crashed. They are in Butte now, as is another good friend of the Feldkamps from Wallowa County, Steve Krieger, with whom Hostetter said he has been in direct contact.

Hostetter said that Feldkamp family members visit the Lostine River Ranch "a lot," and in fact their son was in Lostine last week. In all the Feldkamps had one son and three daughters.

Feldkamp's business headquarters is in Redlands, Calif. He has been part owner of the Lostine ranch since the mid-1990s; co-owner is Michael Gaughan, who also owns the South Point hotel and casino in Las Vegas.

The plane was likely designed to carry a total of 11 people, including two pilots, Rosenker said at a news conference.

Rosenker said he did not know the ages of the children, and it was possible that a very small child would be on the lap of an adult, he said.

"We are going to have to try to understand how and why there were an additional three people (over the assumed configuration) on the aircraft," Rosenker said. Some luggage was retrievable for weight and measurement analysis, he said.

The turboprop plane left Oroville, Calif., headed for Bozeman, Mont., but changed course to Butte, where it crashed on final approach Sunday. The pilot gave no indication to air traffic controllers that the aircraft was experiencing difficulty when the pilot asked to divert to an airport in Butte, Rosenker said in an e-mail earlier in the day.

Rosenker said there was "no indication of any trouble when the diversion was requested to ATC (air traffic control)."

The plane crashed Sunday afternoon just short of the Bert Mooney Airport in Butte. Like thousands of small airports across the country, the Butte airport doesn't have radar control.

It was the worst plane crash in America since a commuter plane last month fell on a house in a suburb of Buffalo, N.Y., killing all 49 passengers and a man in the home. Before the Buffalo crash there hadn't been an accident involving a commercial airliner in the U.S. in which there were fatalities in more than two years.

Rosenker confirmed that people aboard the plane were plan meet others in Bozeman, to ski.

A witness said the plane jerked to the left before nose-diving into a cemetery.

Kenny Gulick, 14, told CBS' "The Early Show" on Monday that he thought he was watching a stunt plane because the pilot was making so many turns.

"He jerked the plane to the left too quickly and lost control of it, but that's just my guess," said Gulick. "And all of a sudden it went into a nosedive. I noticed the pilot trying to pull up but he was extremely low to the ground and he didn't pull up in time."

On Monday, snow fell gently as investigators gathered before dawn at the scene of the crash in Holy Cross Cemetery, 500 feet short of Bert Mooney Airport.

A California newspaper, the Napa Valley Register, reported on its Web site late Sunday that a family of five from St. Helena, Calif., including three preschoolers, was among the victims.

With no radar at the Butte airport, a pilot approaching would normally switch to a radio frequency used by aircraft coming in and out of Butte to find out if there were any other aircraft in the area. Then the pilot would use visual flight rules and follow the procedures for landing at that airport.

The plane was registered to Eagle Cap Leasing Inc. in Enterprise, Ore., said FAA spokesman Mike Fergus. He didn't know who was operating the plane.

Eagle Cap's president is Irving M. Feldkamp of Redlands, Calif., corporate records show. FAA records show that he has been a pilot since 1994 and is certified for instrument flight.

Feldkamp also is listed as president of Glen Helen Raceway in Southern California. There was no response Monday to phone messages left at the raceway seeking comment. A number in Redlands in Feldkamp's name was disconnected.

The plane was a Pilatus PC-12. In Switzerland, Markus Kaelin, executive assistant to the chairman of Pilatus Aircraft, said the company had no comment.

Steve Guidoni, of Butte, was driving by with his wife when he saw the crash. "It just went straight into the ground. I went over there to try to help. I thought maybe I would pull someone out of the fire."

Guidoni said he saw luggage and seat cushions lying around, but no bodies. He said the biggest piece of the plane was the size of a kitchen table. "You wouldn't even know a plane was there," he said.

Nick Dipasquale, 19, was working at a gas station across the street. "I heard a loud bang," he said. "It sounded like someone ran into the building."

Butte Silver-Bow Sheriff John Walsh said there were a few people at the cemetery at the time of the crash, but no one on the ground was injured.

The plane took off from Brown Field Municipal airport in San Diego on Saturday evening and flew to Redlands, Calif., about 100 miles north, said Rachel Laing, a spokeswoman for the city of San Diego.

It then left Sunday morning for Vacaville, Calif., according to Flight Aware, a Web-based service that tracks air traffic. From there it flew to Oroville, Calif., and on to Butte.

Clyburn: 'Don't know' if SC will be Biden firewall

Rep. Meeks: Bloomberg put his money where his mouth is