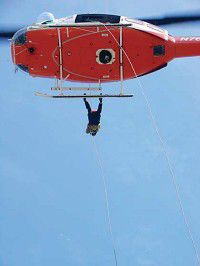 <I>The Eagle/Scott Mallory</i><BR>A firefighter prepares to rappel from a helicopter during training at the Grant County Regional Airport.

<I>The Eagle/Scott Mallory</i><BR>A firefighter prepares to rappel from a helicopter during training at the Grant County Regional Airport.

JOHN DAY - Their job is to fight forest fires. Sometimes, their commute is by helicopter and rope. Members of forest rappel crews drop into a fire zone from a helicopter that hovers as high as 200 feet.

Teams from around Eastern Oregon, including firefighters from the Malheur and Umatilla national forests, spent about a week training in early June at the Malheur National Forest airbase at the Grant County Regional Airport. A group of more than 100 hopefuls went through the Region 6 Rappel Academy, which is nationally recognized as providing some of the best rappel training in the country.

The academy is leading the way in standardizing training for rappellers. It's won awards for excellence in preparedness and training, and firefighters come from all over to learn from the best. The rappel tower at the airport is the only one in the Northwest.

Part of the training involved precontract inspections of aircraft, including five helicopters, and pilots.

Once the rappellers are on the ground, a fire box containing two Pulaskis, a shovel and 36 hours of food and water for two people is lowered from the helicopter. A chain saw box may be lowered depending on the need.

Ken Jennings wins 'Jeopardy! The Greatest of All Time'