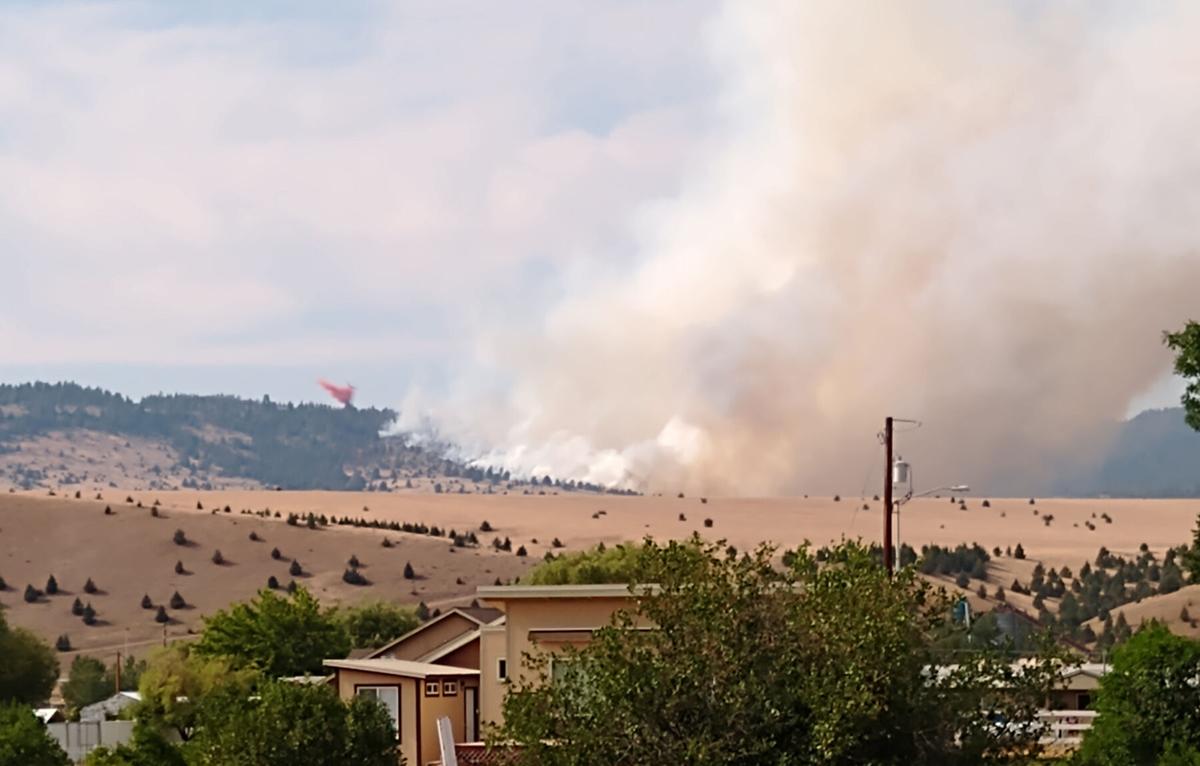 In the distance, a plane drops retardant on the Dixie Creek Fire Saturday, July 3. The fire was originally reported July 1, but firefighters were unable to locate it until it erupted July 3. 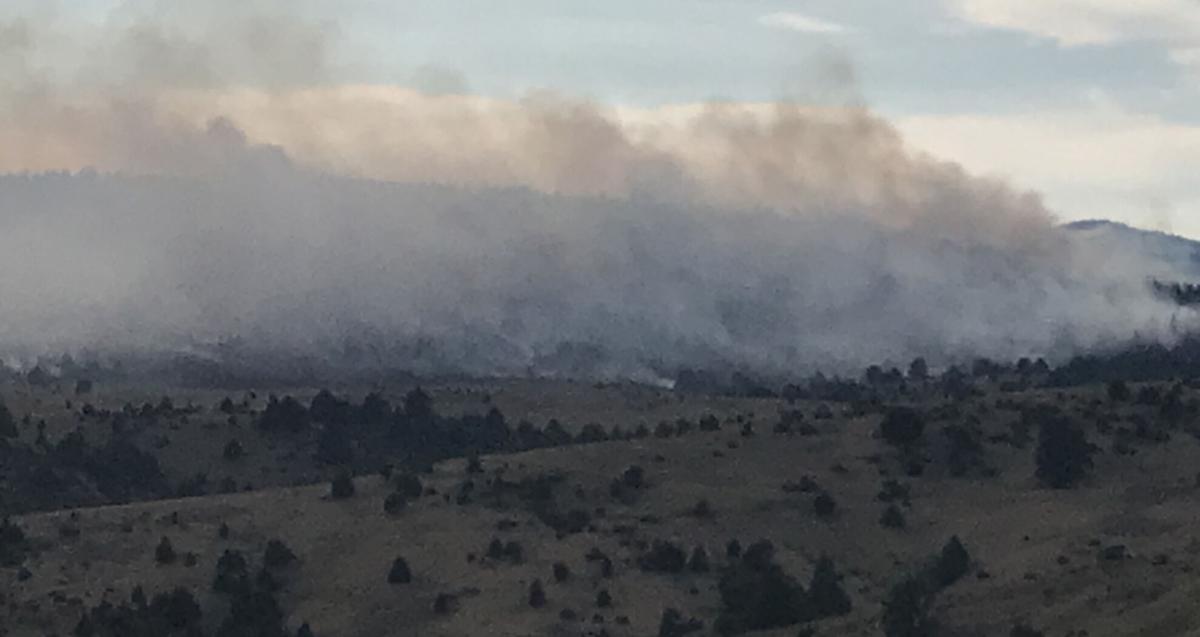 The Dixie Creek Fire burns 3.4 miles northwest of Prairie City on Saturday, July 3. The blaze erupted on July 3 after firefighters were unable to locate the smoke July 1.

The Dixie Creek Fire smoke plume is seen Saturday, July 3. The smoke was originally reported July 1, but firefighters were unable to locate it. 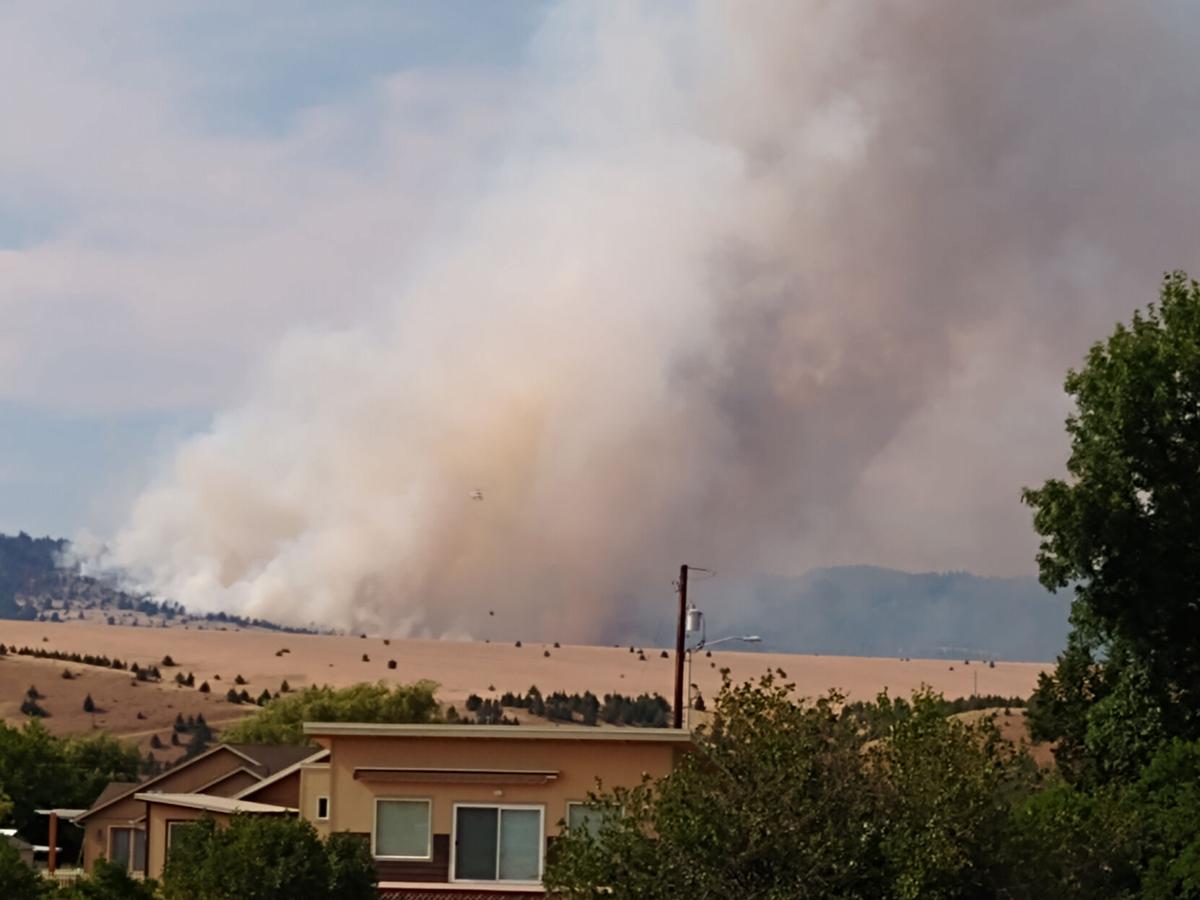 A helicopter emerges from the smoke of the Dixie Creek Fire July 3.

In the distance, a plane drops retardant on the Dixie Creek Fire Saturday, July 3. The fire was originally reported July 1, but firefighters were unable to locate it until it erupted July 3.

The Dixie Creek Fire burns 3.4 miles northwest of Prairie City on Saturday, July 3. The blaze erupted on July 3 after firefighters were unable to locate the smoke July 1.

The Dixie Creek Fire smoke plume is seen Saturday, July 3. The smoke was originally reported July 1, but firefighters were unable to locate it.

A helicopter emerges from the smoke of the Dixie Creek Fire July 3.

Though thankful for fire crews’ quick and aggressive response, some residents believe a now fully contained fire 3 miles north of Prairie City could have been avoided.

According to Oregon Department of Forestry, a passing thunderstorm ignited the Dixie Creek Fire on July 1. The fire was “smoldering” and “unobserved” until wind and scorching heat allowed it to explode on July 3, ripping through upwards of 500 acres and prompting Prairie City officials to scrap the fireworks show. The wind kept the blaze from tearing through structures, according to ODF.

Ricolla Voigt, Grant County deputy district attorney and a landowner near Dixie Creek, said she reported smoke coming from the Ricoh Ranch on July 1, a little before 4:30 pm.

She said she made a second call a little after 6 p.m. and told dispatch the smoke was coming from the other side of Dixie Creek after riding about a mile and hiking to a higher elevation to get a clearer view of the smoke and its location. She said she snapped a photo of the smoke and shortly after saw a plane directly above the smoke but could not determine what fire agency it belonged. Nonetheless, she said at the time it appeared they were on it.

A short time later, she said, a fire engine arrived at her house, and she described where she saw the smoke and pointed out what was in the photo before texting it to them, and they left at 6:30 p.m.

The next day, she said she did not see any smoke.

“I assumed that it had been taken care of,” Voigt said.

Voigt said two days later, when the fire blew up, she checked the online fire log and saw someone had tagged her smoke report as a “false alarm.”

She said that was “weird” and that she saw from a map of the fire that it started within the “legal description” ODF had documented for the report she made.

Christie Shaw, ODF public information officer, said over 250 lightning strikes hit the John Day Unit from June 30 and July 1. Those lightning strikes created “holdover fires,” which are dampened by rain or burning in fuels that don’t produce a visible column of smoke. Shaw said they go undetected for a time before they gain enough intensity to dry nearby fuels and spread across the landscape.

Shaw said she used tracking software to pinpoint the day and time of the fire’s ignition. She told the Eagle that it was at 4:15 p.m. on July 1.

According to Shaw, ODF uses the software to focus patrols following lightning storms in areas with a lot of activity. However, Shaw said the software is imperfect, and often the actual strike is up to a mile away from where it shows up on the map. Nonetheless, she said it gets crews in the general area.

ODF’s search for the fire

Shaw said dispatch responded with three engines, including the one that went to Voigt’s home.

She said an additional report of smoke in the same general area from Prairie City Rural Fire Department diverted an engine to look for that fire.

Still, she said, dispatch added another engine to assist with the effort.

Meanwhile, a wildland supervisor joined the effort and attempted to get a helicopter into the area but could not. But a recon flight with an aerial observer in the passenger seat with the sole task of scoping out new fires did not report any smoke or fire in the area.

Shaw said the supervisor hiked to a higher elevation within the area to visually locate the fires, at which point it started to rain.

She said the Dixie Lookout reported seeing “water dogs,” which are low clouds or mist close to the ground and are often mistaken for smoke.

According to Shaw, they could not locate any smoke after it rained. However, Shaw said ODF resources continued to look for both fires until about 7 p.m.

She said Rynearson drove to the area on July 2 and moved through the site of the Dixie Creek Fire and did not see or smell any smoke.

Shaw said a crew responding to the fire after it blew up Saturday met a group of campers leaving the area. She said the campers saw the strike on July 1 and drove to the fire but did not report it.

Rynearson and Camarena did not respond to a request for comment by press time.

One source of frustration was that the report was dismissed as a “false alarm.”

Shaw said the reports were officially labeled “unable to locate” in the dispatch log. She said the public-facing online dispatch log, WildWeb, has a narrow range of classifications and labeling an incident as a “false alarm” allows them to close out the incident.

According to Shaw, during periods of heavy lightning storms, dispatch receives countless reports they label as “false alarms.” These include fires they cannot locate, duplicate reports of the same fire, fires that burn themselves out and fires that precipitation puts out.

However, the online public-facing system ODF uses has limited classifications under the “type” section.

Shaw said she had been unaware there had been earlier reports of fires in the Dixie Creek area.

Shaw said she tracks fires by incident number across three interagency dispatch hubs. When the July 3 report came into her, it was reported as a new incident because she did not go back and identify it again.

Nonetheless, she said she takes full responsibility for labeling it as “unobserved” when that was not the case.

Contacting landowners and working together

Voigt said she was not trying to be critical, nor was she trying to blame the individual firefighters. She said she had a fire on her family’s property a couple of years ago, and the response from fire crews had been “great.”

She also emphasized the speedy and aggressive response on July 3.

Regardless, she said, she does not want a large fire to occur. With drought conditions not seen in the county in over a century, Voigt said it would be a “really long summer.”

She said she wished fire crews had followed up with her or the people who owned the proerty where she noticed the smoke to let them know they could not locate the fire.

Local landowners, she said, can be used as a resource.

Shaw said, in hindsight, they would have liked to have seen crews go back, especially given the hundreds of acres of natural vegetation that burned.

“We don’t like to see that,” she said. “Our goal is always the smallest fire footprint as we can, and so it’s frustrating that we did miss an opportunity. “

Then again, she said, they might not have found the fire even with better direction from locals.

“Holdover fires are challenging, and they had people likely within a few hundred yards in the area where the fire started up days before it kicked up,” she said.

Shaw said ODF is trying to learn from the situation and look at what they could have done differently, and the situation would be a reminder for them all summer long.

“If we can’t find something,” she said, “we need to take those extra measures to figure it out.”

Meanwhile, she said some people in the community are upset and feel like fire crews did not look for the fire, which was not the case.

Shaw said, while she does not live in Grant County, others who fight fire for ODF do, and she wants those who are frustrated to know those firefighters are doing the best they can.

"If we can't find something, we need to take those extra measures to figure it out."

AOC on evictions: Can't blame the GOP when Democrats have the majority