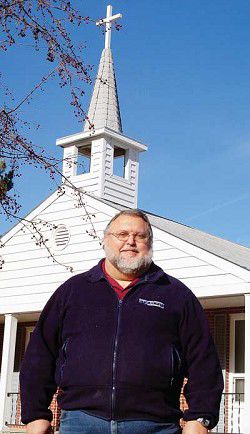 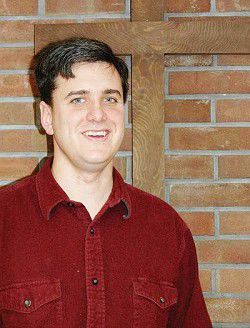 Editor's note: This year Thanksgiving comes in a time of difficulties for the region, the state and the world, as economic problems mount. We asked several local pastors how they and their congregations are coping, as they focus on faith in times of trouble. Here are their comments, with our hopes that readers may find inspiration and hope within.

JOHN DAY - "We have times of luxury and times of want," says Rev. Roger Blesi of the Redeemer Lutheran Church.

Currently, some people are seeing their retirement money disappearing, and that's a challenge for them, he said.

"We may not have everything we want - the trick is to be content with what we have," Blesi noted. "We have to learn to trust Him (God)."

Blesi hasn't seen an increased financial need among his congregation, but he has noticed the needs of other community members, especially those using the Grant County Food Bank.

The church recently held a "Feed my Sheep" fund-raiser to support the food bank with monetary donations matched - 50 cents for every dollar - by Thrivent Financial for Lutherans through their "Care in Communities" program.

Blesi also helps "those in a tough spot" through the church's Love Fund which gives short-term assistance for things such as utilities.

He recently returned from Burns where he held a joint Thanksgiving service for members from Burns and John Day.

He shared scriptures to help inspire, including:

"He causes his sun to rise on the evil and the good, and sends rain on the righteous and the unrighteous." (Matt. 5:45) and "Keep your lives free from the love of money and be content with what you have, because God has said, 'Never will I leave you; never will I forsake you.'" (Hebrews 13:5).

Blesi encouraged perseverance and patience and for people wait for things to turn around.

"I pray that everyone has a good Thanksgiving, no matter what their situation is, and that they keep their mind on the horizon because things can certainly change for the good."

According to Pastor Dan Benson of John Day United Methodist Church, it's the times of trial in our lives in which we find thankfulness for those things we already have.

"It's then that those small things seem to bring even more joy," Benson said.

And it's those times of fear and uncertainty, he added, that can also show us just how much we can rely on God and trust in His goodness.

Benson noted that many people he's encountered who lived through the Great Depression have credited two things for getting them through those difficult years: their strong faith and their active participation in the community.

Those characteristics ultimately helped them see that God sustained them and provided for them in one way or another.

In our own area's current economic hard times, Benson said he has seen from his congregation an increased awareness of the needs of the local community - specifically in the area of food and hunger - and willingness to reach out to help.

In response, the church is now laying plans to set up an emergency food pantry, which will complement the work done by the Grant County Food Bank.

Assisting them in this effort is their sister church, Sherwood United Methodist Church, who are providing them with advice, shelving and an initial stock of food to get the pantry up and running.

John Day United Methodist Church is also a designated recipient for distribution of funds from the Emergency Food and Shelter National Board Program.

Benson said that most of that money usually goes to help with oil and other energy costs. The funds this year were apportioned in two amounts of $2000 each.

This year's first allotment of $2,000 was gone in just one day, according to Benson.

Benson added they are hopeful that the food pantry, which the church ran some years ago, will be even more successful this time around.

"The people of our church are stepping up and saying, 'We're going to find a way to give to the community in a new way.'"

Scott Hoberg: A calling to do something positivePRAIRIE CITY - Scott Hoberg believes letting go is important in tough times.

Hoberg, the pastor of the Assembly of God Church in Prairie City said people often wrestle with problems that are beyond their control.

"When you find yourself concentrating on the general economy, the mills or about oil and wood prices put your faith in God," Hoberg said. "There's many things you cannot control, and you should leave those to God, but if you have a calling to do something positive do that."

Hoberg said he drew on Matthew 6:25 when preparing the Thanksgiving sermon he delivered Sunday, Nov. 23. The passage says not to worry about earthly goods because God will provide, "Which of you, by being anxious can add one moment to his lifespan?"

Hoberg and members of his church have tried to get past the anxiety by working on ways to help others in their community as the holidays and winter draw close. He said he said he hasn't seen a dramatic rise in the need of the services, but expects the need to mount through the winter.

However, Hoberg said he hasn't seen a rise in the number of people turning out for church services currently.

"I think when the wood begins running out and gas bills get high we'll see more people turning to the church," Hoberg said. "What I'm seeing right now in our church is people being more generous with donations of money and goods."

Hoberg said the one of the keys for Prairie City as times get hard isn't any single church, but the relationship that the local churches have with one another. The pastors of Prairie City's churches have monthly meetings and often work together for outreach.

The Assembly of God and other churches will be helping Prairie Baptist Church put on a free Thanksgiving Day dinner at 1 p.m. Thursday, Nov. 27, at the Prairie City Teen Center.

"In Prairie City I try to never take for granted the relationships I have with the other pastors and churches," Hoberg said. "All the churches support each other. We can talk and agree on this fact or disagree on that fact, but we all have one boss, God. Our boss just gives us all different callings through him."

Andy Anderson: Praying for our leadersJOHN DAY - "We have to have hope and trust in the sovereignty of God."

That's the outlook Pastor Andy Anderson of Cornerstone Christian Fellowship said is vital to surviving through any difficult period, but especially in our current times of economic hardship.

He added that their congregation draws strength from a particular biblical passage in the book of Philippians which says, in part, that God will supply all our needs.

Anderson also said that Cornerstone's congregation remains active and works closely with other area churches. Sharing thoughts and ideas with other faith communities is a good way for everyone to deal with difficult times, he said.

In fact, according to Anderson, the faithful at Cornerstone Christian Fellowship continually ask themselves throughout the year how they can minister to our community.

"We are always looking at ways we can support our local businesses. We pray for our mayors, council persons and other community leaders, too, that they make good decisions for our community," Anderson added.

As for the upcoming Thanksgiving holiday, Anderson said that their church works on the theme of thankfulness throughout the month of November, focusing on it from both Biblical and cultural perspectives.

He said that they also regularly expresses thankfulness during worship times and out in the community by means of teaching, music and fellowship.

Dwelling and holding on to the positives in our lives, whatever they may be, is a key component to getting through any tough time, Anderson pointed out.

"We all have to hold on to the hopes that we already have."

Daniel Wiese: Thankful for blessings, graceJOHN DAY - The Rev. Daniel Wiese of The Church of the Nazarene says he's looking to give his congregation a sense of normalcy amid a topsy-turvy economy.

"People are a little more anxious," he said, noting that some of the members have been laid off work. Some are "concerned about where the next paycheck is coming from."

Yet, those he's spoken with have shown faith, he said, expressing their trust in God and putting their trials in his hands.

Wiese suggests that when we are thankful and appreciative of what we do have, we don't think so much about what we don't have.

The church cooperates with other local churches to help those in the community with needs.

While he hasn't seen an increase in those asking for assistance, he pointed out that there are probably those who have a hard time asking for help.

He believes there are those behind the scenes who are looking out for others fulfilling Christ's admonition to love one another. He also spends time visiting the members of his church.

Last Sunday a special communion was held, and Wiese's sermon focused on "Thanksgiving grace - those blessings that we have that we don't deserve, but he gives us anyway."

The group later met at the Grant County Fairgrounds pavilion for turkey and potluck.

Watch this snowboarder survive an avalanche in Colorado

Trump opponents celebrate as he moves out of White House