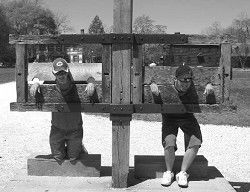 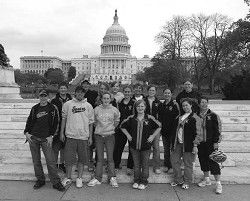 DAYVILLE - Thirteen Dayville High School students got a whirlwind trip into history last month when they traveled to the Washington, D.C. area.

At the White House, they saw the president - almost.

"We saw the helicopter land when we were at the White House," noted teacher Skip Inscore, one of three adults who made the trip.

They did get to meet one elected official - U.S. Rep. Greg Walden of Oregon - while at the Capitol, however.

"He was very receptive," said Inscore. "He spent about five minutes with the kids - and five minutes of his time is very important."

In addition to Inscore, the chaperones were Joanne Flower and Darlene Moss, although Inscore noted that "this group of kids is so great, they didn't need chaperones."

The students raised money over two years to make the trip. The cost was about $1,150 per student, with most of that raised by donations and fund-raisers.

The trip is a tradition for the school. Every two years, a group travels either to Washington, D.C. or New York, N.Y. They set an itinerary that is packed with historic and cultural sights.

The students miss a few days of school, but they do homework assignments and keep travel journals. The trip itself is something of a living classroom.

The students said they get a much better understanding of their classroom lessons from seeing places like Williamsburg and Jamestown firsthand.

"History becomes real," said Inscore. "No longer is it just a printed page."

Travel has another benefit, in that it broadens the students' horizons, he said.

"The trips are intended to pique their interest so that later in life, they'll say, 'I want to go back there - There's more I want to see,'" Inscore said.

The itinerary had plenty of fun. The students all seemed to like the rollercoaster at Busch Gardens, and they enjoyed seeing a play and taking a dinner cruise on the Potomac, complete with dancing.

They had just as much to say about the more serious sights, though.

Jessica Flower said she could have spent all day at the Holocaust Memorial Museum, with its thought-provoking displays. One room, she noted, was lined with shoes from Holocaust victims.

"That one really got me," she said.

The visit to that museum was planned toward the end of one day, so that the students could just go back to their hotel "and crash."

"It's an emotional thing to see," said Inscore.

The students also were impressed to see the Declaration of Independence at the National Archives, and they had a ball on Bike the Sites, a bike tour of the Capitol Mall. Everyone had a favorite, when it came to the national monuments.

Tiana Moss was impressed by the FDR Memorial, while Josh Ewings liked the Lincoln Memorial best.

"But you can't top the White House, and having a helicopter land," he added.

Marley Winkelman was impressed with the visit to Williamsburg, where costumed "locals" offer a glimpse of olden days.

"People there were so knowledgeable," she said.

Inscore and the students said they really appreciated all the local people and businesses in Dayville, John Day, Mt. Vernon and Monument who helped financially so the kids could make the trip.

"Without them, the trip would not have been possible," he said.

Ex-national security adviser says US reputation has been harmed

This is how Biden says he'd fix the health care system