<I>The Eagle/Cheryl Hoefler</I><BR>Runners line up to start the half-marathon in Prairie City. 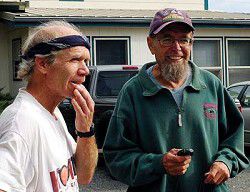 <I>The Eagle/Cheryl Hoefler</I><BR>Winner Randy Hennen, left, enjoys endorphins at the end of the event, and chats with coordinator Richard Thompson.

<I>The Eagle/Cheryl Hoefler</I><BR>Runners line up to start the half-marathon in Prairie City.

<I>The Eagle/Cheryl Hoefler</I><BR>Winner Randy Hennen, left, enjoys endorphins at the end of the event, and chats with coordinator Richard Thompson.

That was the distance that a dozen runners - four women and eight men - strode between Prairie City and John Day last Saturday, Sept. 18.

First of the 18th Annual Strawberry Mountain Half-Fast Marathon athletes to cross the finish line at John Day City Park was Randy Hennen of Prairie City, who clocked in at 1:26:45.

The second time was the charm, Hennen said. Saturday was his second, and likely last, half-marathon, he added. He bested his previous time, and had put in about 45 miles each week for many months to get ready.

Making the morning even more of a community event, two walkers took on a 10-kilometer course, approximately 6.2 miles, from Pine Creek Road and John Day City Park. They were Kathy Stinnett and Brook Williams.

Two other women - Yvonne Pepin-Wakefield and Candy Reagan - chose to run the 10K.

"This is a good thing for the community and for the region. There aren't a whole lot of half marathons around, and those that have separate walking events," said coordinator Richard Thompson, who organized the event for the fifth year, but didn't run it this time.

"I wanted to make sure it goes off well," Thompson said, since it was his last year as coordinator. He has someone else who will likely head the event in 2011, "so next year I will back out there running."

The walking option has been an intermittent part of the event during its 18 years, Thompson said.

Participants and their times are as follows:

New video shows what it was like inside Capitol during riot