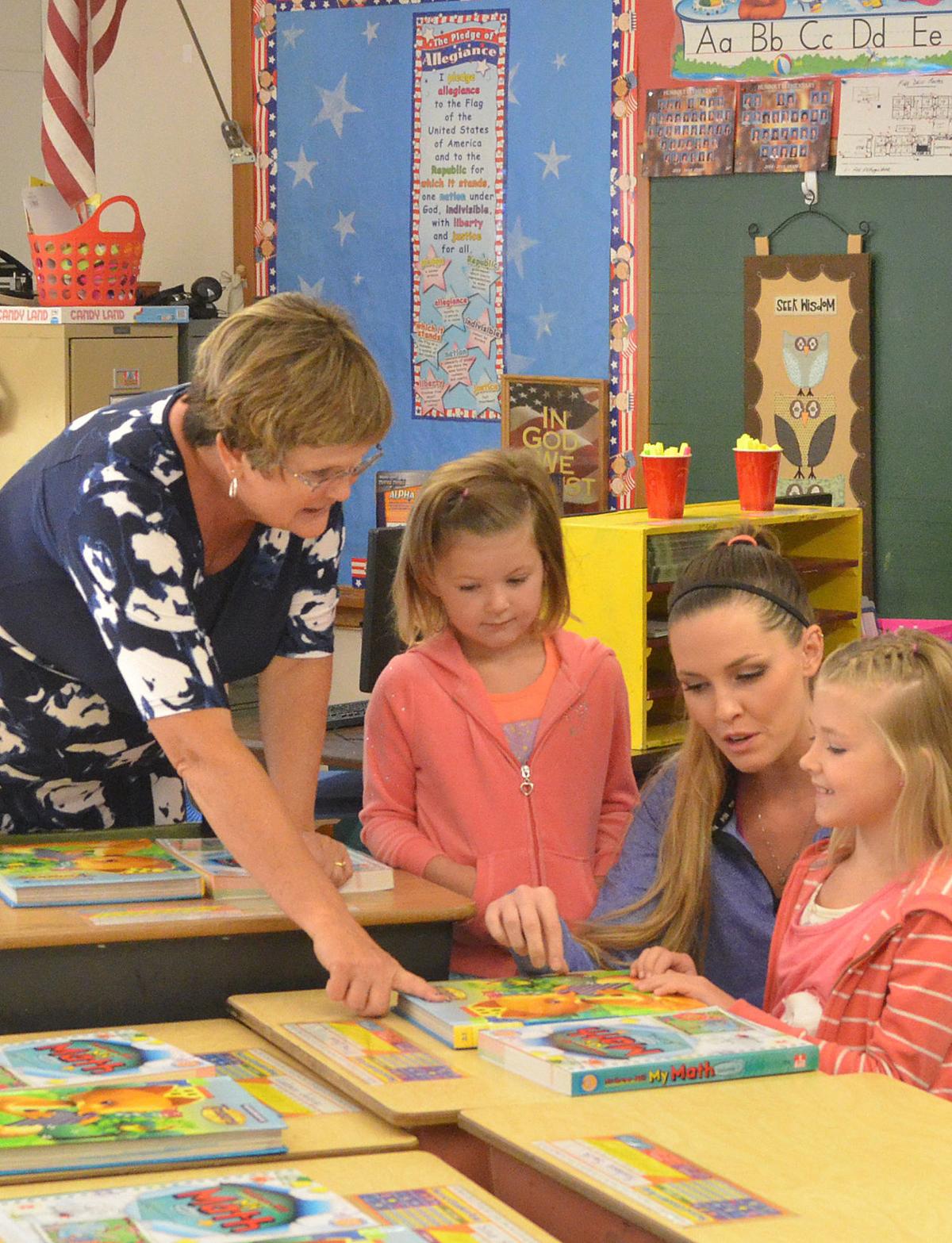 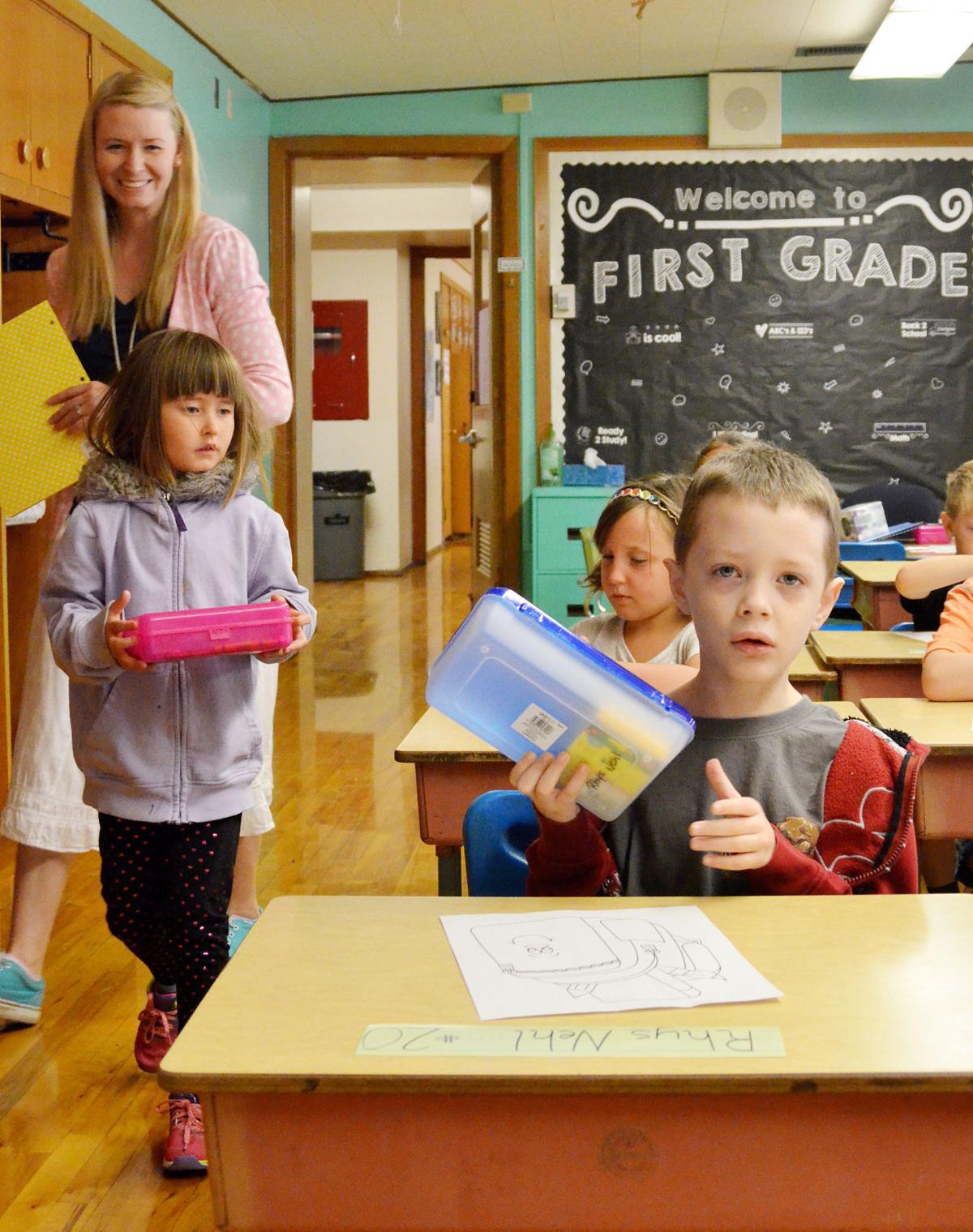 Rhys Nehl, front right, is ready for his first day of first grade at Humbolt Elementary School, as his teacher Mandy Ipson shows Angie Stansbury to her desk. 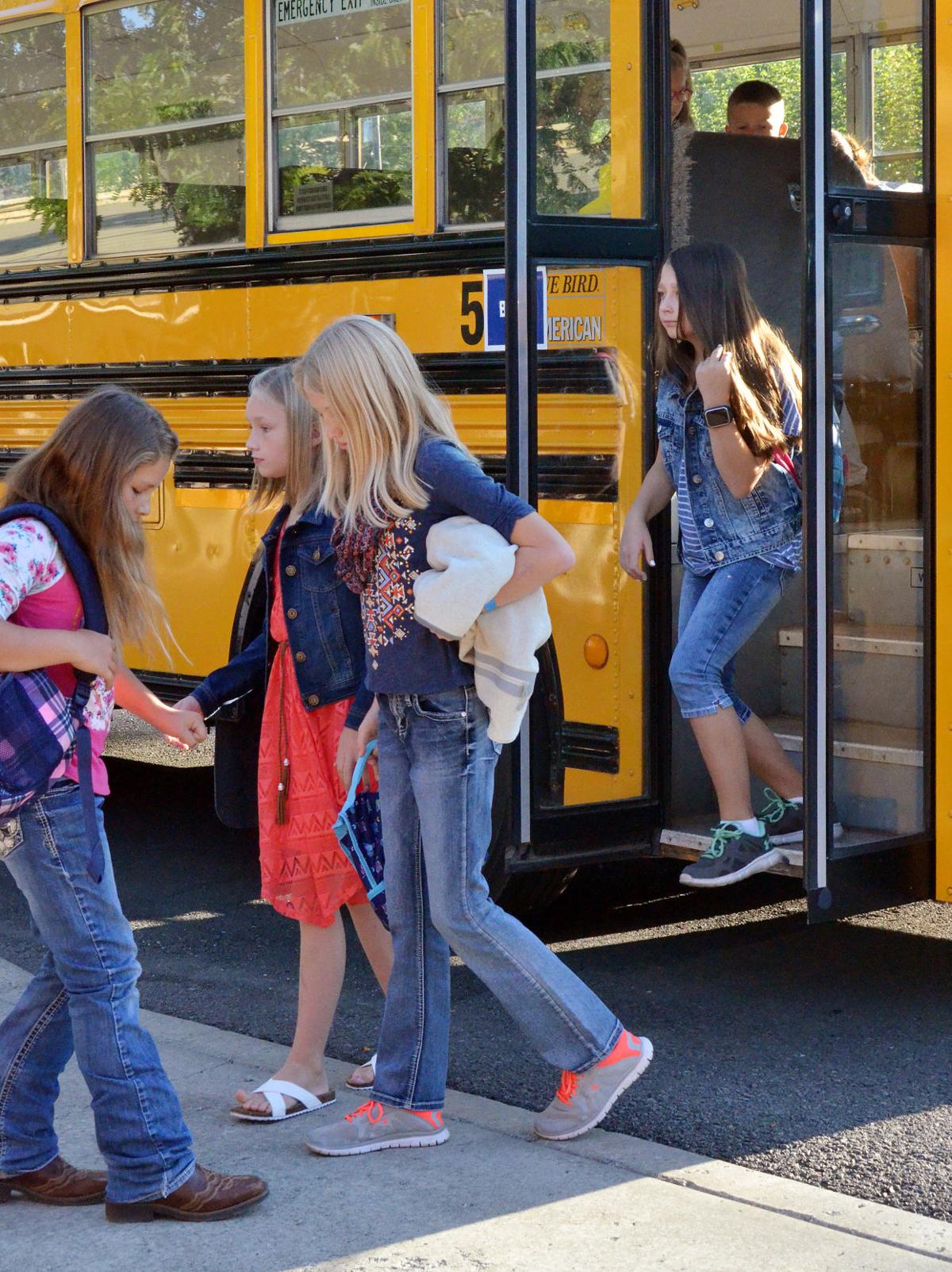 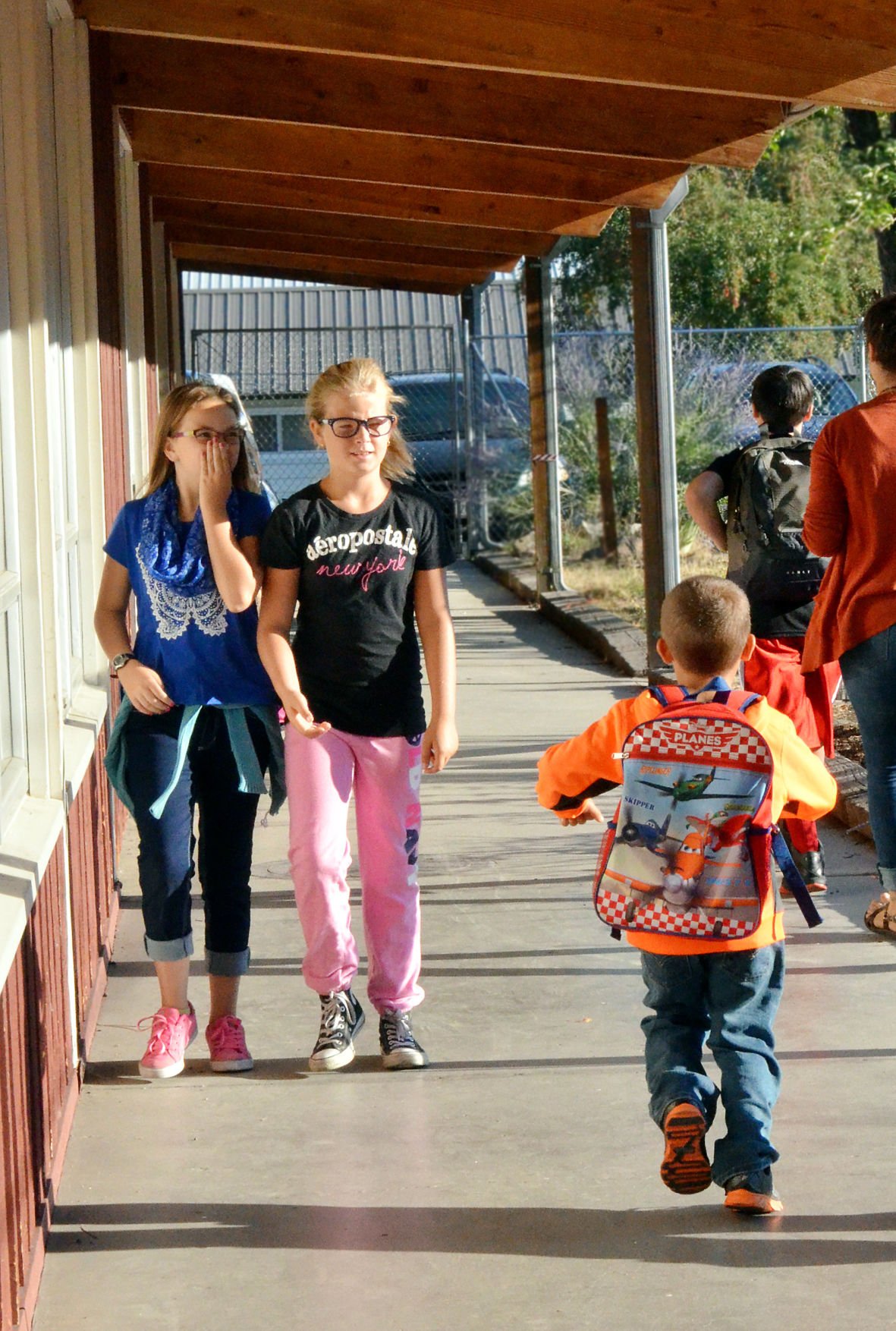 Students at Humbolt Elementary in Canyon City rush to their classes on the first day of school. 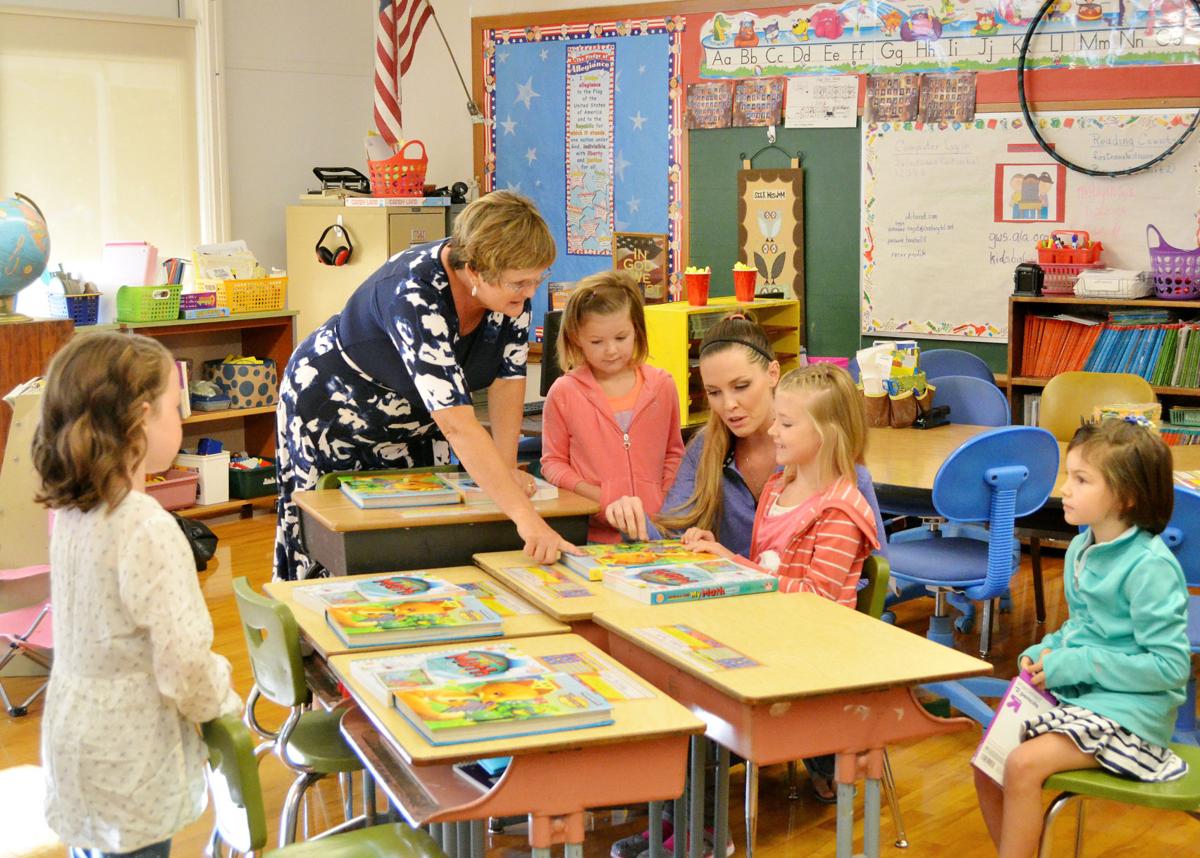 Rhys Nehl, front right, is ready for his first day of first grade at Humbolt Elementary School, as his teacher Mandy Ipson shows Angie Stansbury to her desk.

Students at Humbolt Elementary in Canyon City rush to their classes on the first day of school.

Students in Grant County stepped back into the classroom this week and last, ready to get back into the swing of reading, writing, arithmetic and much more.

Educators were ready for them, after completing training over the summer and preparing their rooms.

Prairie City School’s Superintendent/Principal Julie Gurczynski said, “It seems like just yesterday that I was wishing everyone a happy summer” and now she and the school staff have their “boots on the ground and running.”

She said they are welcoming two new teachers, Nate Barber for grades 7-12 social studies and Amelia Harmon for grades kindergarten through 12 art.

Student enrollment, as of last week, was 145, which she said is about the same as last year.

This is Gurczynski’s second year leading the school.

“Last year was a wonderful year, and I can’t wait for this year to begin,” she said. “We have a great town, great kids and a great staff.”

Also in her second year as superintendent/principal, Kathryn Hedrick of Dayville School said two new teachers have joined them, including Shilo Fretwell, for grades kindergarten through 2, and Kerri Latshaw, who teaches grades 6 through 8 and is the school’s art teacher.

New at the school this year are elective classes for junior high students, such as shop and career technical.

They’ve also separated the junior high students from the younger and older grades.

Hedrick said the reason for the change is to help them, socially as well as academically, as they transition from grade school to high school.

Grades 6 through 12 had a field trip the first week of school to the North Fork John Day River to see staff from Oregon Department of Fish and Wildlife perform a salmon sampling count.

“We’re calling ourselves an experiential school, giving our kids giving more experiences and using the campus as a laboratory ... so classroom learning has a relevancy to how it applies,” Hedrick said.

She added they’re focusing on STEM — science, technology, engineering and mathematics — as well as art.

“I feel like we got a shot in the arm in our energy level, and we just want to keep that going,” she said.

Del Dykstra was getting his feet wet as the new superintendent/principal of Long Creek School District when school started Monday.

He’s been in the education field for 27 years, including the past 17 years in Sunnyside, Washington, working for both private and public schools.

“It’s a new area, a new challenge, and I’m looking forward to it,” he said of his new position at Long Creek School. “It’s the first day with kids — the kids are the best part of the job.”

Enrollment at the school is expected to be down slightly; last year, there were 36 students, and this year there are 34.

The enrollment was 60 as of last week; last year ended with 62.

After a week and a half of school in session, Superintendent/Principal Earl Pettit said he was happy to see the speech team in full swing with an associated course in public speaking, a relatively new offering at the school.

“I am most looking forward to increased participation in co-curricular activities,” he said, “especially FFA, music and speech where the participation rates are growing significantly.”

Grant Union Principal Ryan Gerry is welcoming two new teachers, Derek Lamson, who will teach eighth-grade English and English I, IA and communications; and Katherine Sherwood, who is teaching Spanish I and II, as well as seventh-grade English.

Gerry said they’re thankful to have Mary Ann Vidourek, who retired as head of the music department for Grant Union and Humbolt, returning to the district on a temporary basis until the position is filled.

Humbolt Principal Kim Smith said Amy Hittle, who has worked in the special education department for the district, is now teaching fifth grade at Humbolt.

Andrea Combs is adding to her duties in the district as the head teacher of Seneca School.

She will also teach special education at both Humbolt and Grant Union.

New teachers at Seneca School include Andrea Ashley for grades 4 through 6 and Dana McLean for grades kindergarten through third.

Shelley said he and the district staff are excited to welcome back the students. He said they strive to “engage all students in meaningful programs which meet the highest educational and ethical standards with a caring and collaborative learning community.”

He added they work to ensure each student excels personally and academically, becomes a lifelong learner and is a responsible citizen.

“The staff is committed to working together to be the best for students,” he said.