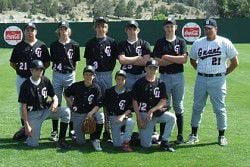 JOHN DAY- Grant County Babe Ruth has been in full swing since April 7 and if you haven't had the chance to see a game yet, there's still plenty of opportunities.

Grant County features two teams of 13-15 year-olds - the Marlins and the Braves - who play home games at McConnell field. The Baker Cubs and the Baker Red Sox round out the four-team league.

League play was scheduled to begin on May 21, with the Marlins taking on the Braves at McConnell Field.

Both teams will also be competing in the 24-Hour Wood Bat Tournament in Hermiston on June 8. The six-team tournament will feature round-the-clock games, and aluminum bats are prohibited.

Grant County Babe Ruth relies heavily on fundraisers, volunteers, and donations for support. On June 2 both teams will be running a can and bottle-drive in the parking lot of Chester's Thriftway from 9 a.m.-3 p.m. For more information, call John Stearns at 575-0654.

Biden gets angry talking about son during healthcare question

How New Orleans is dealing with flooding