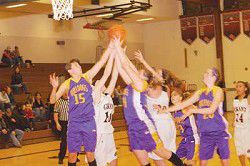 <I>The Eagle/David Heldreth</I><BR>Grant Union and Baker players go up for a rebound during the team's Saturday, Jan. 10 game in John Day. <I>The Eagle/David Heldreth</I><BR>Grant Union and Baker players go up for a rebound during the team's Saturday, Jan. 10 game in John Day.

JOHN DAY - The Grant Girls will be spending a lot of time in the post this week.

The Grant Union girls basketball team lost its first home game in a month 60-45 to Baker Saturday, Jan. 10. The Grant Girls are the highest scoring team in 3A basketball, averaging 58.8 points a game, but the Bulldogs held them to their lowest point total of the season. Grant Union's previous scoring low came in a 70-49 loss to Joseph Dec. 5 and a 49-40 win against Lakeview Jan. 3.

Rebounding was the key in the game. Grant Union was outrebounded by more than three to one by Baker.

"The story of the game was rebounds," Grant Union coach Ryan Carpenter said. "We got beat in rebounding 38 to 12 tonight. Second chances killed us. We'll definitely be working on that hard this week."

Although Grant Union is scoring a lot of points this season, the team wasn't able to get the ball in the basket Saturday. The Grant Girls trailed 15-8 after a first quarter that saw only two players score for the home team. Katelyn Page was the only offensive force for Grant Union early in the game. She scored the first seven points for the team and went on to lead the team with 13 on the night.

Mackinsey Nash scored the final point of the first quarter on a free throw. She went on to score seven points in the game. Kiaya Wilson also had seven points, and Sharon Houpt rounded out the top scorers with six.

"Our offense wasn't quite there," Grant Union junior Natalia Yazzie said. "Our shots weren't falling. It was like there was a lid on the basketball net."

Baker didn't have any problems putting the ball in the basket Saturday. The Bulldogs had their second biggest offensive night of the season against Grant Union. They only scored more points during a 62-42 win over Emmett Dec. 19. Grant Union also gave Baker its third highest point total in a 60-55 Bulldog loss Dec. 18.

The Grant Girls have been explosive on offense, but have conversely given up the most points of any team in 3A basketball. They average 54. 4 points allowed a game.

"It's like Jerry Tarkanian said, 'Let them score, so we can hurry up and get the ball back,'" Carpenter said.

Baker coach Tim Smith said his team was driven by a desire to avenge the Dec. 18 home-court loss to the Grant Girls.

"I thought the difference between the games was our defense," Smith said. "We wanted them to earn everything they got, from the half court set on. They're a good team. They came into our place and played a good game. We wanted to get that back with a win here."

The Bulldog win snapped Grant Union's six-game win streak. The streak was the longest for the team since Carpenter took control of the team in 2006.

The Grant Girls are now off to their best start under Carpenter's leadership as well. They are 8-4 this season. Grant Union finished with nine wins last season and eight wins during the 2006-07 season.

The Grant Girls' final win of the streak came against Union Tuesday, Jan. 6.

Grant Union outscored the Bobcats 66-62 in a come-from-behind victory. Union's Jessica Reynolds scored 18 points in the first half to help the Bobcats to a five-point lead going into halftime.

"We had trouble matching up with her," Grant Union coach Ryan Carpenter said. "She seemed to always find a way to be open."

However, Grant Union made defensive adjustments during the break and came out attacking on defense. Reynolds was held to six points in the second half.

The Grant Girls forced 38 Union turnovers in the game. Grant Union's pressure even prevented the Bobcats from in-bounding the ball; four of the turnovers were five-second calls when they failed to get the ball in bounds.

Yazzie led the Grant Girls with 19 points and five steals. Houpt had 16 points and four steals while Page had 14 points and nine rebounds.

"This was a victory celebrated by our entire team," Carpenter said. "Each person played a huge role. I was extremely impressed with Sharon Houpt as she stepped up her defensive game. Natalia Yazzie has been the surprise of the season so far this year. She has had an all-league preseason. She is our best defender as has been the spark to our scoring."

Dr. Birx: Trump presented graphs that I never made