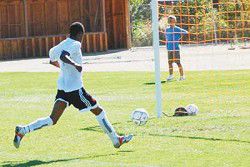 <I>The Eagle/David Heldreth</I><BR>Grant Union's Husein Umar takes the ball into the goal during the Prospectors 7-3 win over Umatilla at home Sept. 13. 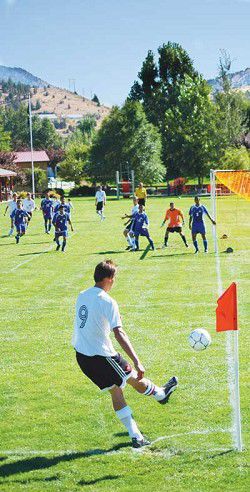 <I>The Eagle/David Heldreth</I><BR>Grant Union's Husein Umar takes the ball into the goal during the Prospectors 7-3 win over Umatilla at home Sept. 13.

Grant Union opened up the scoring against Burns and was able to work the entire team into the game. Nearly 70 percent of the Pros' shots were taken on goal against the Hilanders.

Burns' keeper left the game and was taken to the hospital for broken ribs and other internal injuries after a collision with Grant Union's David Sprouffske.

"The play was clean when the keeper got injured," Grant Union coach Ken Purnell said. "The officials didn't call anything. They were both going for the ball. It's just one of those things that can happen in soccer."

The Pros continued to push the ball on offense during their game against Umatilla. Henrik Shia put a head on the ball and sent it into the goal in the first 14 minutes of the game to put Grant Union up 1-0. Shia would end the day with a hat trick.

Husein Umar closed out the first half with two goals in the last 15 minutes before halftime. His final goal came on a soft shot after he beat the keeper. Umar's goals gave Grant Union a 4-1 lead at halftime.

Darren Frazier added two goals including one in each half.

Umatilla's Jonathan Mendoza had two goals in the game. The Vikings' Maximo Bedolla scored a goal the play after he collided with Grant Union's keeper Jake Waldner. Waldner left the game shortly, but returned minutes later.

"Jake was fearless in the goal for us," Purnell said. "He played tough and got a lot of saves. He got banged up and he was able to play through it."

Although Umatilla only had three goals they threatened for several more, but were called for offsides a dozen times.

Umatilla coach Pedro Ortiz said he felt the calls were one sided.

"We didn't play as well as we can, but we had trouble with the line calls," Ortiz said. "There were times we weren't offsides and they called it and times were the other side was and it wasn't called."

Grant Union will now travel to play Central Christian at 3 p.m. Thursday, Sept. 18 and will then face Irrigon at home at 1 p.m. Sept. 20.