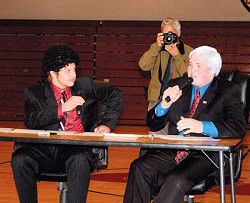 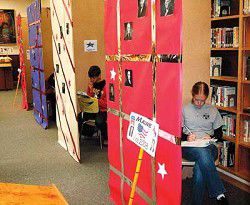 <I>Contributed photo</I><BR>GUHS student Audrey Lallatin marks her ballot in the privacy of a voting booth Nov. 4.

<I>Contributed photo</I><BR>GUHS student Audrey Lallatin marks her ballot in the privacy of a voting booth Nov. 4.

JOHN DAY - Barack Obama (aka Preston Ake) and John McCain (aka Lincoln Mosier) held a lively debate on Nov. 4 at Grant Union High School during a morning assembly, sharing with the student body their viewpoints on various issues.

Ake and Mosier each have a high regard for the candidate they impersonated.

"It was fun getting into our future president's shoes," Ake said.

It was Election Day and nearly everyone at the school, students and staff, took part, voting in a mock presidential election with student and state ballot measures to consider. The school had a 97 percent voter turnout.

Mosier, student body president, came up with the idea about a month ago.

"I wanted to get students involved and see what an actual election was like," he said. "Everyone had a bunch of fun."

Juniors and seniors in Elizabeth Shelley's leadership class helped pull off the event, including Ake, who was happy with the debate.

"McCain" at one point in the debate asked his opponent how he planned to pay for a proposed bill to give college tax credits.

"Obama" replied, "Well, if we get our troops out of Iraq and stop spending 10 billion dollars a month, then we will have enough funding for our citizens."

The two also debated timber issues and foreign policy. Each had one minute to respond to the questions and 30 seconds to provide a rebuttal.

Other students presented the ballot measures and let students know what a yes or no vote would mean.

Student Ballot Measures dealt with issues such as student uniforms, no homework on school nights, designated parking spaces and no sports fees for higher GPAs.

The measures are serious student concerns.

"We hope that some of these will go on to the school board and they'll consider them, at least," Mosier said.

Students also voted on two measures that were on the actual Oregon ballots - Measure 57 regarding mandatory sentencing, (passed with 72 percent of the vote) and Measure 60 which asked if teachers should be paid according to their performance (54 percent voted no).

Students were divided into states according to their last names; for example, students with a last name beginning with W were California. Each state took turns voting throughout the day at eight voting booths, which were set up in the library and decorated by the leadership class.

McCain won the students over with 66 percent of the vote compared to Obama's 30 percent.

Write-ins accounted for 4 percent of the vote, and included Ron Paul, Ralph Nader and teachers Shae Speth and Elizabeth Shelley.

About 50 students attended an evening get-together at the school to watch the election results unfold. The event, hosted by teachers Carol Kilpatrick and Ryan Carpenter, was complete with pizza and sodas.

Mosier was "depressed" at the news of McCain losing the real election. "We're mourning the loss of America," he said.

Still, he was quick to point out the positive.

"Everyone was really involved and talking about it and looking at the issues," he said.

Principal Mark Witty was impressed with the level of enthusiasm the students demonstrated for the election process and the commitment leadership students showed in conceiving and carrying out the mock election plans for the school.

"I'm hopeful that it will carry on when they become voting citizens in this country," he said.

Bernie Sanders' warning for Democrats for 2022