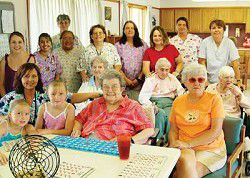 <I>Eagle photos by Angel Carpenter</I><BR>Above, center, Edna Dickens, a resident of the nursing home with her daughter Carolyn Lenz (right). Director of nursing services Brandi Hampton (left, behind twin sisters 7-year-old Kaylee and Hailie Wright) said everyone was pleased to hear of the facility's recent deficiency-free rating - their ninth. "It's a team effort." 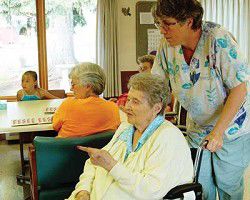 <I>Eagle photos by Angel Carpenter</I><BR>Above, center, Edna Dickens, a resident of the nursing home with her daughter Carolyn Lenz (right). Director of nursing services Brandi Hampton (left, behind twin sisters 7-year-old Kaylee and Hailie Wright) said everyone was pleased to hear of the facility's recent deficiency-free rating - their ninth. "It's a team effort."

Hall, who lived most of her life in Burns has resided at the nursing home for more than a year now.

A group of three state inspectors found the nursing home to be pretty good also; they rated it deficiency-free during their unannounced visit on June 12.

The surveyors from the Department of Health and Human Service Centers for Medicare and Medicaid Services generally wrap up their visit in three to five days, popping in at any hour they choose. The results of the visit are provided 10 days afterward.

Their visit makes the ninth consecutive year the nursing home has received no citations.

About six other nursing homes in the state received deficiency-free ratings for at least three years, but none for nine years in a row.

Brandi Hampton, director of nursing services for the facility, said that in Oregon and even nationwide it's uncommon to have that many deficiency-free ratings in a row.

"It makes us feel good that even with a whole new set of surveyors we still came up deficiency-free," she added. "It's a team effort and everybody should be very proud; ... It takes everybody here in order to make something like that happen."

Employed at the nursing home for 10 years, Hampton was resident care manager for eight years and has held her current position for two years.

She oversees about 38 staff members and about 29 residents, although they are licensed for 48 residents.

"They said that it was obvious that all the staff was familiar with the residents and genuinely cared - not just the direct-care staff," she said.

Hall had other positive comments as well.

"If you need help, they're there," she said. "I can't really find any gripes. If I need lifting, they're very careful and when I press the call button they answer as quickly as they can."

Edna Dickens sat in the dining area ready to play a game of bingo with her daughter Carolyn Lenz of John Day and some of the other residents and visitors - including 7-year-old sisters Kaylee and Hailie Wright of John Day.

Dickens has lived at the nursing home for two years and moved to Grant County from Tennessee in 1950.

Having worked as a cook at Mt. Vernon School for many years, someone recently told her she should go to work in the nursing home kitchen. She chuckled, and said it wouldn't be possible right now.

"I like the people here," Dickens added. "They're not stuck up."

Anyone wanting to tour the facilities may call 820-3341 or just drop in.

Pa. Republicans’ major election overhaul advanced in the state House as Democrats called it a ‘farce’