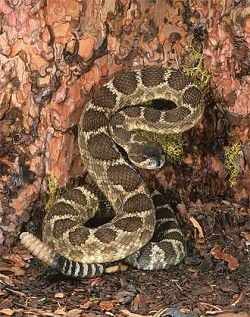 The Northern Pacific rattlesnake is most likely the only rattler you will encounter in Northeast Oregon.<I><BR>Photo by Terry Steele</I> 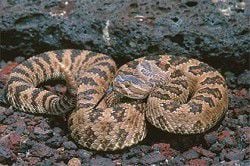 Steele has found Great Basin rattlesnakes in Harney County, and in California, Nevada and Utah. Bottom: A Steele favorite for striking color and markings in the Black-tailed rattler.<I><BR>Photo by Terry Steele</I>

The Northern Pacific rattlesnake is most likely the only rattler you will encounter in Northeast Oregon.<I><BR>Photo by Terry Steele</I>

Steele has found Great Basin rattlesnakes in Harney County, and in California, Nevada and Utah. Bottom: A Steele favorite for striking color and markings in the Black-tailed rattler.<I><BR>Photo by Terry Steele</I>

I believe it would be safe to say that not everyone likes rattlesnakes. On the other hand, some of us find them very beautiful and extremely interesting. As a nature photographer, the many species of rattlesnakes in North America are my favorite creatures to photograph and study. On discovering a rattlesnake I feel the same sense of exciting wonder that I experience when I encounter the large predatory mammals.

A good example of the negative feeling some folks have toward rattlesnakes would be well illustrated with the following story. It took place in northeast Texas where I was photographing reptiles and birds in the Davey Crockett National Forest.

I was set up with multiple flash units on a spectacular southern form of the Timber Rattlesnake. A group of people left a hiking trail and came over to me to check out what I was doing. They crowded me to the point they were all but breathing down my neck.

My photo subject began to rattle in annoyance at their presence. Apparently, at that moment one woman in the group saw the rattlesnake and began to shriek hysterically. She nearly scared me to death.

In North and South America there are over 80 full species and distinct subspecies of rattlesnakes. Here in Grant County, we have definitely one subspecies of the Western Rattlesnake and perhaps two: the Northern Pacific Rattlesnake, and in the extreme southern portion, next to Harney County, possibly the Great Basin Rattlesnake. However, the only rattlesnakes I have found in that area have been intergrades (crossbreeds) between these two subspecies.

It is a mystery to me how some Grant County rattlesnake populations appear to end in an abrupt manner. Two examples of this are on the Middle Fork and main John Day Rivers. Old timers always claimed that the western edge of Galena was as far up the Middle Fork that a rattlesnake has ever been found in that drainage. Bear Creek, to the west of Prairie City, has always had some rattlesnakes, but the top of Hall's Hill is as far east as I have known them to occur in that area. Why, when the habitat and micro-climate appear identical, are they found in one place and not another?

Chances are many of the facts you have collected about rattlesnakes over the years are false information.

For example, just because you encounter a rattlesnake in the forest it does not make it a Timber Rattlesnake. That species does not occur in the wild any farther west than mid-Texas.

Another common myth states that if a yellow jacket has fed on a rattlesnake head it becomes as venomous as the snake. If you think about it, once a compound has been digested by an organism, it isn't the same compound any longer.

Many people believe you can tell the age of these snakes by counting the segments of the rattle. Not so, since they gain a new segment each time they shed their skin and shedding varies with the length of season and rate of growth in individual snakes. Also, the rattle can break, losing some of its segments.

It is often said that baby rattlesnakes are more venomous than the adults. Whereas a newborn is very dangerous and fully capable of biting and envenomating a person, this is an old wives' tale. The reality is more or less a matter of volume. A large adult has the capacity to produce much more venom, and with much longer fangs it can inject the venom deeper into its victim.

There are many more tall tales out there about rattlesnakes, but factual information is readily available if one wishes to pursue it. Just remember that not even fish have the power that rattlesnakes possess to bring on yarn spinning by outdoors persons.

Rattlesnake venom varies from species to species and even among subspecies. It is also known that their venom can vary in the same species when influenced by environmental factors such as different habitats. The subject of rattlesnake venom is too complex to give much space here, but it is now known that not only does it possess tissue destroying properties, it also has varying amounts of neurotoxins (like cobra venom).

It is said that most rattlesnake bites are received by young males who have been drinking alcoholic beverages and are attempting to catch or kill the snake. When I received my rattlesnake bite I had already put my boozing days behind me. Although once, when I was quite inebriated, I dropped a live rattlesnake in my lap. Now that gave me a bad moment. I know some Grant County males who have received rattlesnake bites. Since I personally know the only requirement for receiving their type of bite is to be a "dang fool," I won't embarrass them by naming them.

I was living up Laycock Creek in 1988. Having just awakened from a nap, I walked into my back yard where I saw a small first-year Northern Pacific Rattlesnake crawling along. With my right hand holding a mop handle to pin its head, I picked it up with my left hand. As I studied this beautiful little snake, I decided that I might be hurting him with my hard grip. Now I know I would have been better off keeping a firm grip on the little bugger.

However, I chose to loosen my hold on his neck and in less time than it has taken to read this, it wrenched forward, turned and sank a fang into my thumb.

I did not have to wonder if I was envenomated since one fang came down on my thumbnail and a light amber fluid was squirted out over its surface.

Because of the horrendous cost of treating a snake bite, and having no health insurance coverage, I chose not to seek medical care. I experienced a great deal of pain from the extreme swelling but otherwise came away from the event very fortunate. For a couple of years you could see some scarring under the skin from tissue loss.

In retrospect, it was one of the most interesting experiences of my life that even increased my fascination with rattlesnakes; but it is not an experience I would wish to repeat.

Regardless of my personal behavior in the past, I must warn the reader that a bite from the Northern Pacific or Great Basin Rattlesnakes can be fatal, or can result in serious loss of tissue, possibly even loss of a limb.

By being careful where you place feet and hands in rattlesnake habitat you hugely reduce your chances of receiving a legitimate rattlesnake bite. By leaving rattlesnakes completely alone you can totally eliminate the "dang fool" variety of snake bite. Remember that rattlesnakes like you even less than you like them and they usually will try to avoid you. You are far more apt to be killed by lightening in Grant County than by a rattlesnake. Death from rattlesnake bites, compared to other outdoor accidents such as drowning and falls, hardly rates a percentage point in statistics. Stay alert when you are out in rattlesnake country and above all, don't let their possible presence keep you from enjoying Grant County's great outdoors.

I personally brake for all wildlife in the road, including snakes. Having lived most of my life in Grant County, I am aware that some local folks have a long tradition of killing every rattlesnake they encounter and I have no thought of changing that for most of you. It makes sense to control the existence of rattlesnakes in your home environment. However, if some of you are able to look at a new approach, why not let the next rattlesnake you encounter out in the wild live? It just might turn out to be a more satisfying decision than the alternative.

 Terry Steele is a fifth-generation Oregonian. He grew up in the Prairie City and John Day area. He is a self-taught photographer and naturalist. He is known for his presentations and photo art throughout the Northwest.